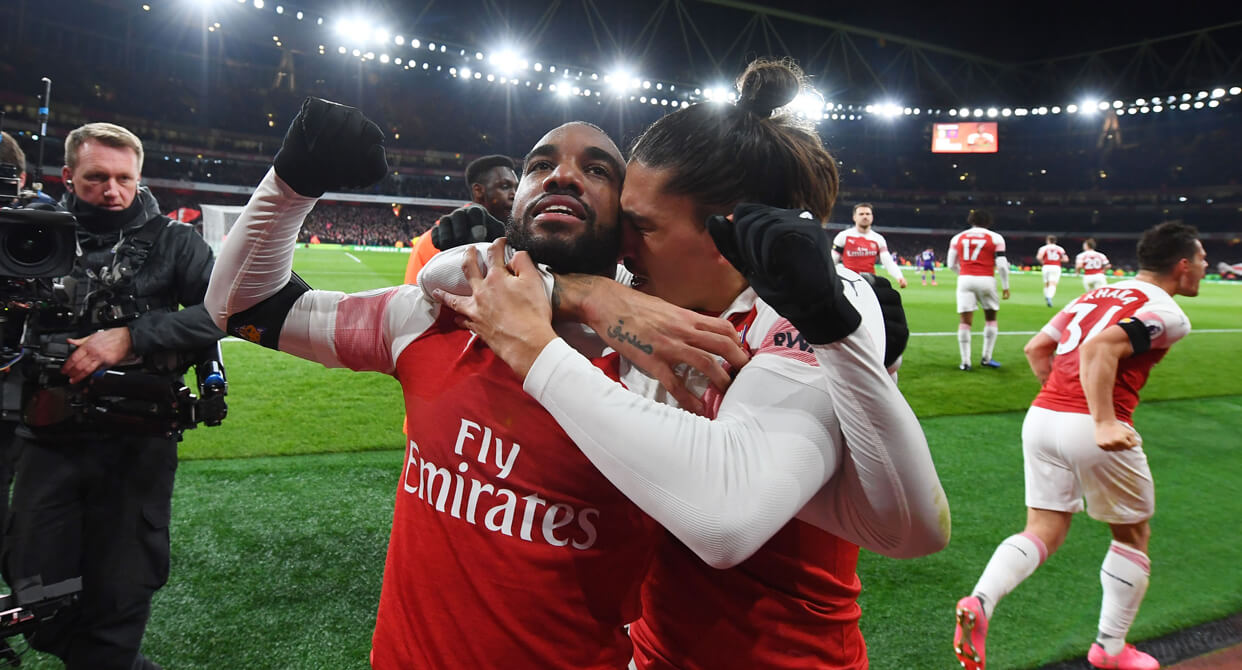 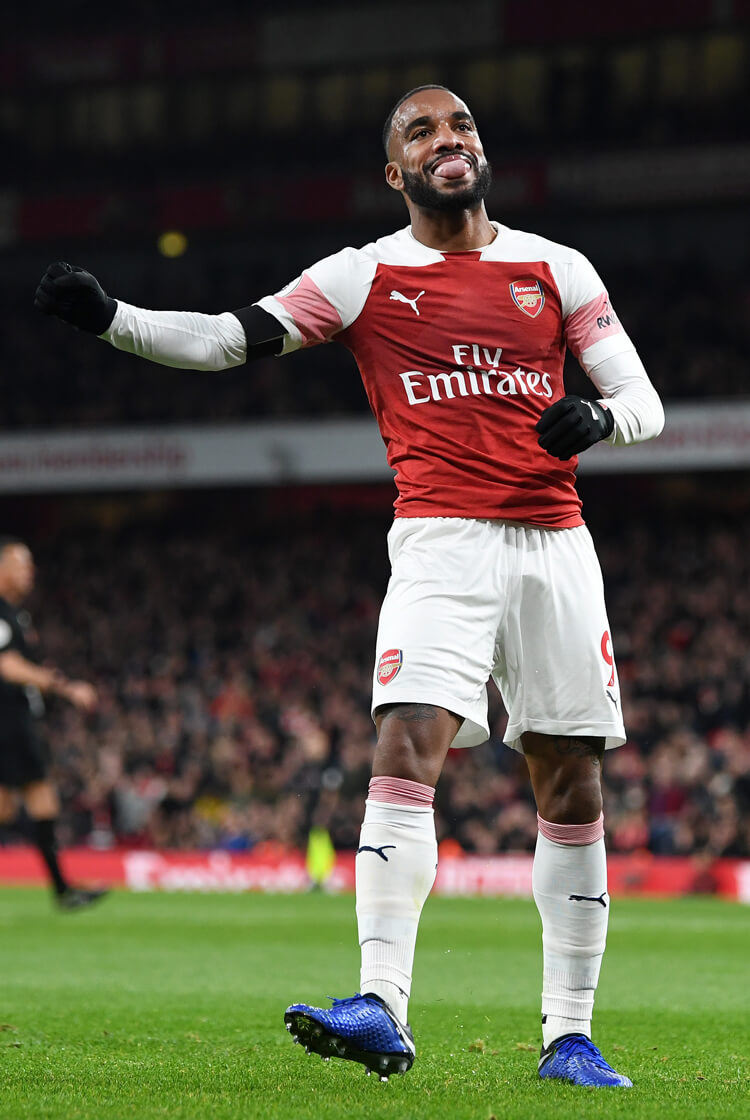 Alexandre Lacazette struck late to cancel out James Milner’s goal and earn a point for Arsenal in an entertaining Premier League encounter with Liverpool at the Emirates. Milner broke the deadlock shortly after the hour mark following an error from goalkeeper Bernd Leno, and the Reds looked set to come away from north London with a crucial win before Lacazette finished superbly eight minutes from time. An excellent pass from substitute Alex Iwobi to the Frenchman drew Alisson off his line, but the Brazilian goalkeeper was powerless as the striker curled home. 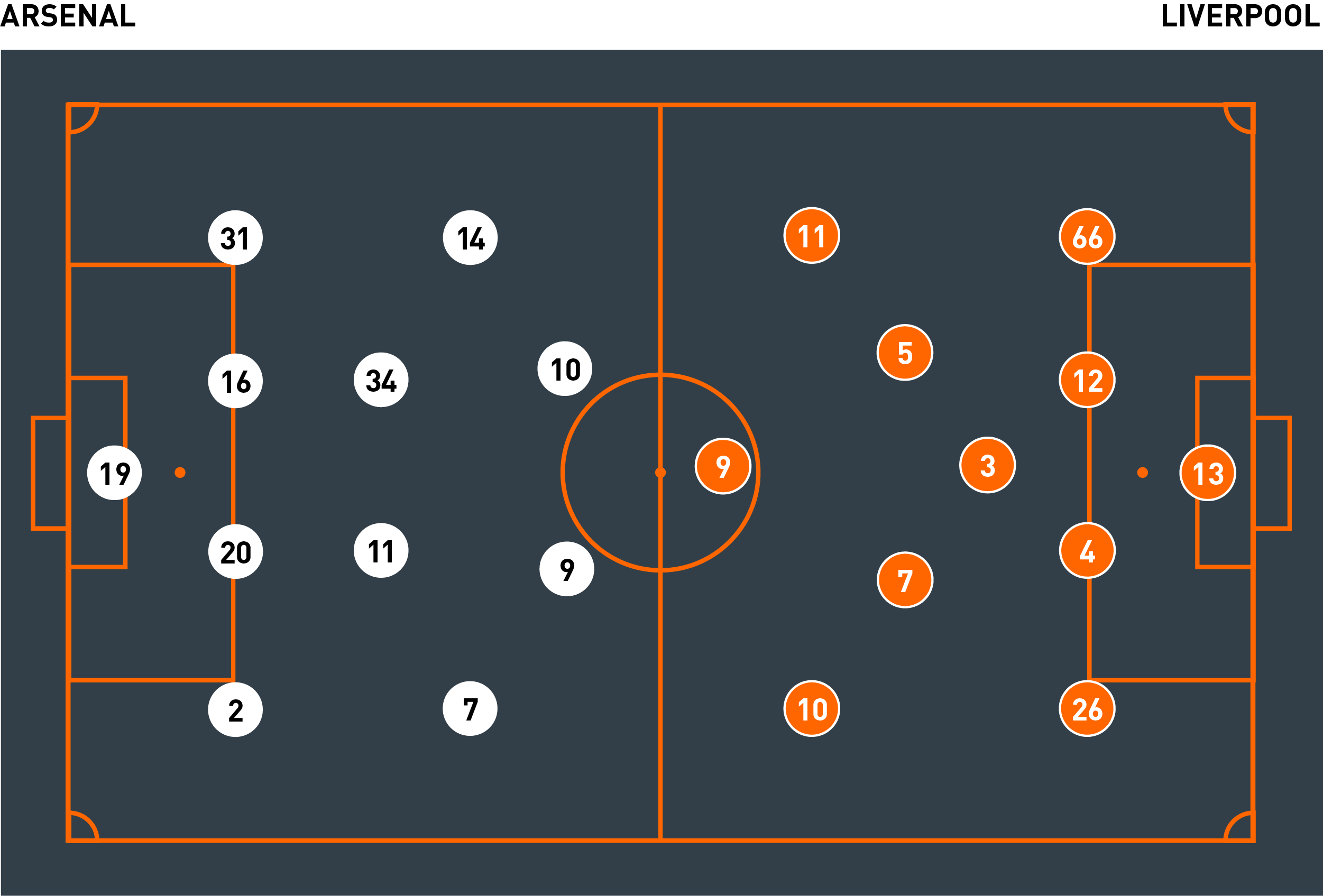 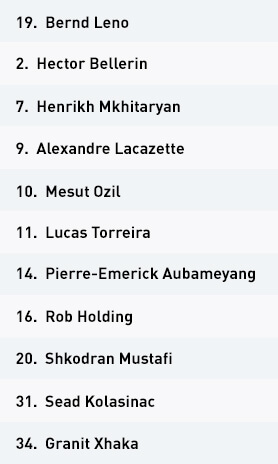 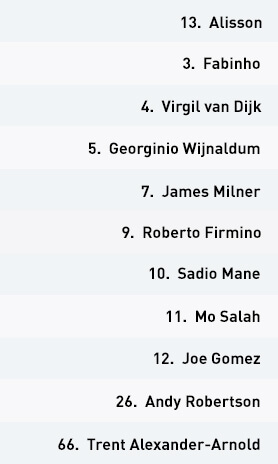 In possession, Arsenal set up in a formation perhaps best described as a 4-2-4/2-4-4. Granit Xhaka and Lucas Torreira provided central cover, which allowed full-backs Hector Bellerin and Sead Kolasinac to push forward. The attack was led by the fluid movement and interchanges of Henrikh Mkhitaryan, Mesut Ozil, Pierre-Emerick Aubameyang and Alexandre Lacazette.

The front four would generally play on different vertical and horizontal lines, asking questions of the Liverpool defence in whether they should hold their line or move with the attackers. Arsenal tried to use this to their advantage by exploiting the spaces in behind the back line, particularly between full-back and centre-back on both sides.

The player who had moved slightly deeper would often end up making the penetrative run in behind, as this asked another question of the defence in when to pass their opponents on and how far to drop before doing so.

While Arsenal would sometimes look to play in behind from deep and central positions, they identified a potential weakness in their opponents’ positional structure in the wide areas. The Liverpool full-backs couldn’t pick up Bellerin or Kolasinac in advanced positions because they already had attackers to deal with in the front four – this left the Reds’ midfield three to cover the entire width of the pitch on the second line.

Arsenal still looked to improve this advantage and would frequently look to play into Xhaka and Torreira, who would occupy central areas and consequently pull Liverpool’s midfield inside to increase central compactness. It was at this point that they would play out to the full-backs.

The introduction of Aaron Ramsey in the 73rd minute not only allowed the attackers to play on the last line, but also meant that Xhaka and Torreira could play deeper – which in turn enabled the full-backs to play even higher. In Ramsey, they now had a player who could occupy opponents centrally – something they didn’t have as much of before the Wales international came on.

Out of possession, Arsenal operated in a varied structure – typically a 4-4-2 or 4-3-3. The key variable was the positioning of Liverpool full-backs Trent Alexander-Arnold and Andy Robertson, with Mkhitaryan and Aubameyang tasked with taking care of them. Ozil and Lacazette, meanwhile, would lead the press.

Arsenal dominated possession with 58 per cent recorded over the 90 minutes, and their counter-press was key to this statistic. As soon as possession was lost, they would look to immediately apply pressure on the ball-carrier and suffocate his options – usually leading to a mistake or a regain.

Liverpool set up in a 4-3-3 formation, with Georginio Wijnaldum, Fabinho and James Milner in midfield. Mo Salah reverted to his regular wide attacking position on the right, with Sadio Mane on the left and Roberto Firmino starting as the central striker.

In possession, Liverpool struggled to gain control of the game. They found immense difficulty in penetrating central areas as a result of the defensive presence of midfielders Lucas Torreira and Granit Xhaka in front of the Arsenal back four. As a result, they had to look to full-backs Trent Alexander-Arnold and Andy Robertson to try to create opportunities. This was initially difficult for the pair, as they were being tracked all the way back to the penalty area by Pierre-Emerick Aubameyang and Henrikh Mkhitaryan.

They tried to overcome this through the movement of midfielders Wijnaldum and Milner. Milner would regularly take up the false full-back position on the left, which would allow Robertson to move higher and in turn present Mkhitaryan with the problem of pressing Milner or passing Robertson on to a teammate. If he stayed with Robertson and allowed Milner to have possession, Mesut Ozil and Alexandre Lacazette had more pressing to do.

At times, Liverpool would overload one side of midfield using Milner and Wijnaldum, and look to move the ball between them to attract the pressure of Mkhitaryan or Aubameyang. This would then open up a passing line to Alexander-Arnold or Robertson, through which the Reds could break out and advance. To maintain balance, a forward (usually Firmino) would drop in to midfield, so that they would still have two players to protect central areas if possession was lost.

These movements eventually led to Liverpool’s goal. They overloaded the right side with Milner and Wijnaldum but switched play left to Robertson, where Mane had also dropped in. It was Mane’s late run from deep, after Robertson had taken a touch out of his feet, that allowed the visitors to get in behind the defensive line and cross dangerously for Bernd Leno to palm into Milner’s path.

Out of possession, Liverpool operated in a mid-block for the majority of the game. The block initially took on the form of a 4-3-3, but having Mane and Salah on the same line as Firmino opened up easy access to the Arsenal full-backs. Noticing this, they adjusted by adding Salah and Mane to the midfield line and allowing their opponents’ centre-backs to have possession.

They would switch to a high press when the Arsenal centre-backs made a poorly weighted pass between one another; Firmino would then try to force them out to one side, where Liverpool could push everyone up to apply intense pressure.

After breaking the deadlock, the Reds moved to a 4-4-2 mid-block, generally with Mane as a left midfielder while Salah and Firmino led the line. Liverpool had to deal with several passes in behind their defence, but the strength of their individual one-on-one defending – particularly from Virgil van Dijk and Robertson – meant that they were largely able to deal with this threat.