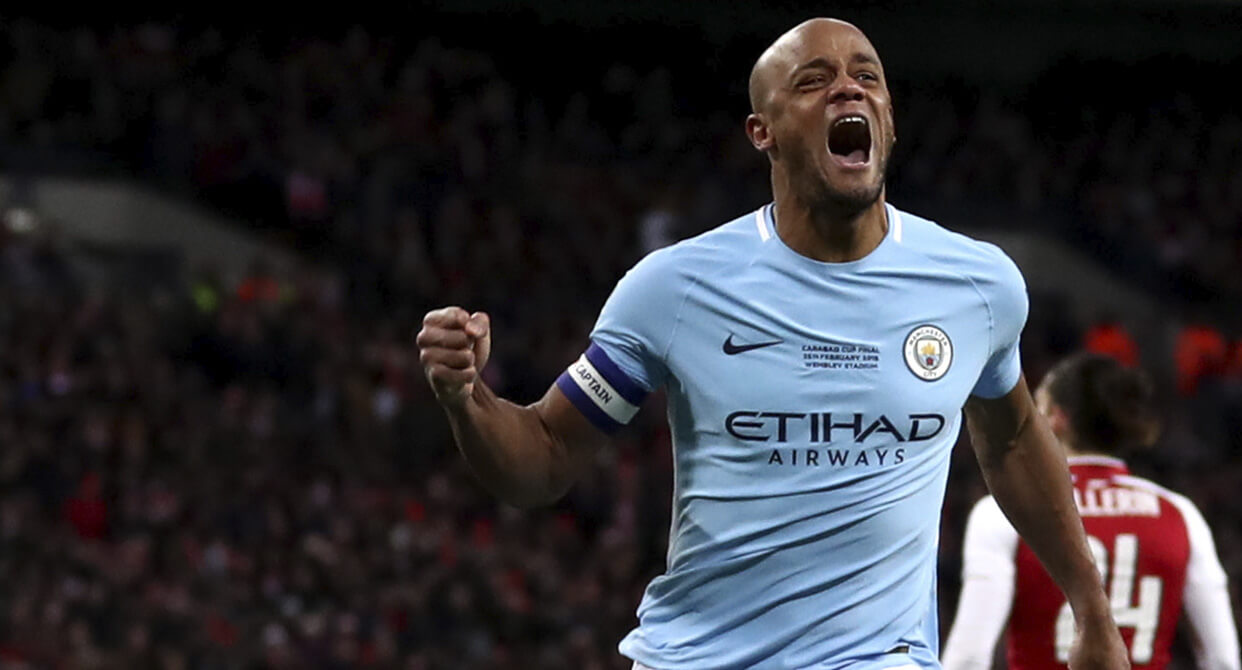 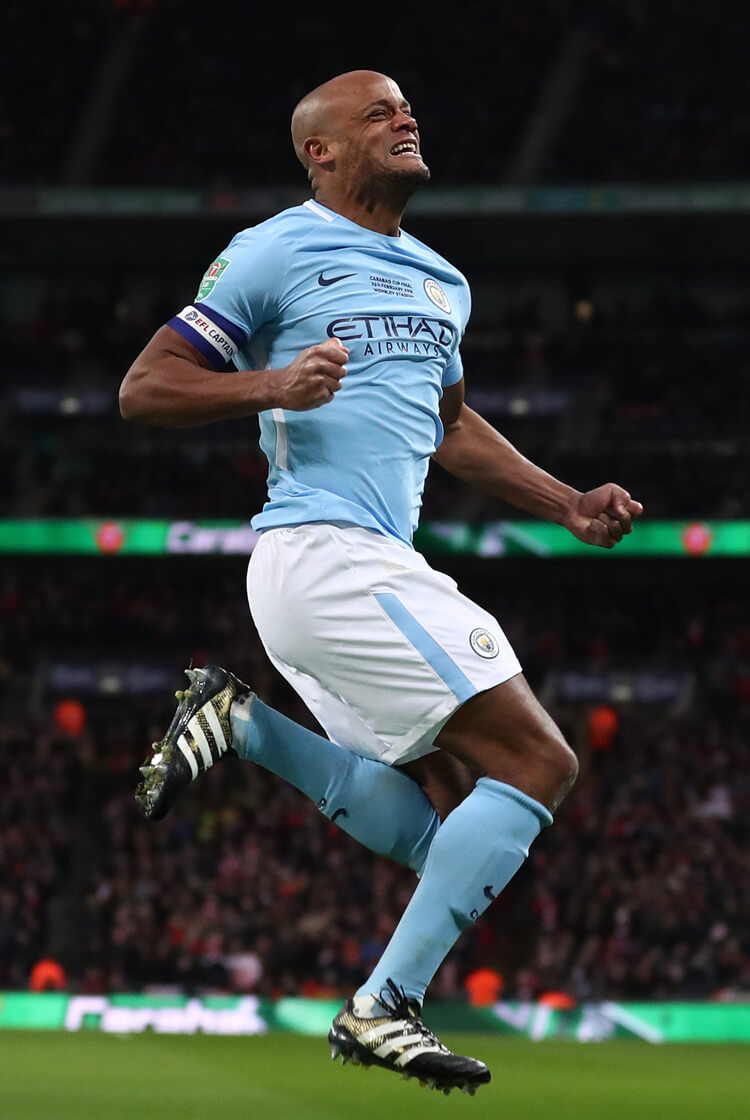 The first major cup final of the season proved a disappointingly one-sided affair for anyone outside the light blue half of Manchester, as Pep Guardiola claimed his first trophy in England with embarrassing ease. Sergio Aguero set the ball rolling with a staggeringly easy opener, lofting the ball over a poorly positioned David Ospina after outmuscling Shkodran Mustafi to latch on to Claudio Bravo's simple long ball. Arsenal rarely threatened to force their way back into it, and the game ended as a contest when Vincent Kompany directed an Ilkay Gundogan shot in for the second not long into the second half. David Silva's clinical strike proved the icing on the cake as City coasted home unchallenged. 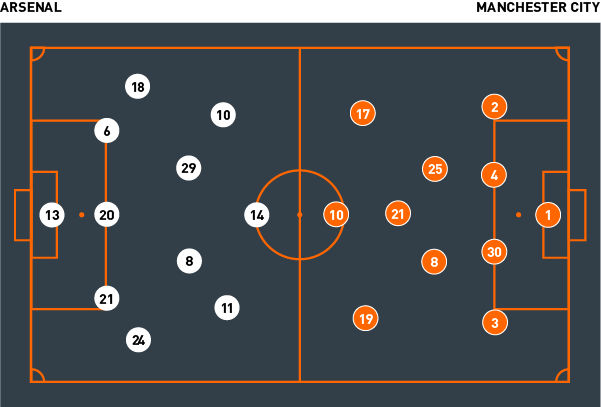 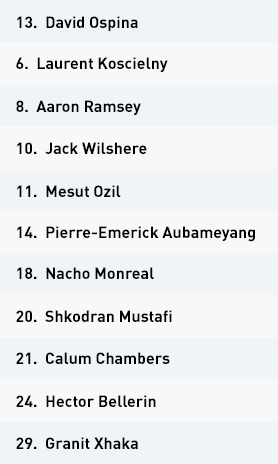 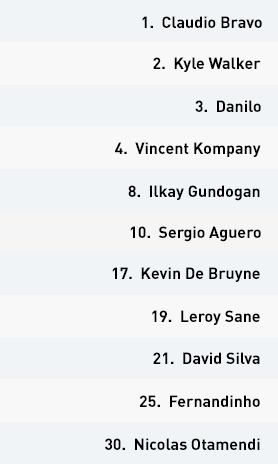 Arsene Wenger lined his team up in a defensive 5-4-1 formation, including Calum Chambers in a three-man central defence to restrict space and in theory give more freedom to Mesut Ozil and Jack Wilshere in the opponent’s half.

When City attempted to play out from the back, lone striker Pierre-Emerick Aubameyang pressed the short pass. The four-man midfield line moved to pressurise their opposite numbers, while wing-backs Hector Bellerin and Nacho Monreal (replaced early by Sead Kolasinac) pushed up to mark City’s full-backs. This often forced Claudio Bravo to go long in the Man City goal, although it also left the three centre-backs one-on-one at the back – and Sergio Aguero getting the better of his man from such a long ball led to the first goal.

In midfield, Granit Xhaka and Aaron Ramsey gave Wenger’s team decent defensive balance, putting pressure on the ball-carrier and working to stop City playing through them.

The three-man central defence didn’t work, however. They were constantly unbalanced by the movement of Aguero, Leroy Sane and Kevin De Bruyne, and struggled with not having one fixed player to mark. With the wing-backs pushing up, too, the team left gaps that could be exploited by the clever passing of David Silva and De Bruyne in particular.

In the second half, and after City’s second goal, Wenger changed the system, taking Chambers off and bringing Danny Welbeck on in a 4-5-1 in defence and a 4-4-2 in attack. Their defensive depth in their own half improved as a result, but with the game drifting away their lack of edge in defensive areas led to the third goal.

In attack, Arsenal had a dual approach. Their first option was to attract City’s players in through passes in their own half, with the intention of creating space in behind their defensive line and attacking them down the wings. For this, they had to look for the free man in midfield, who could play into the space created by City’s advancing full-back. Guardiola’s team dealt with this tactic comfortably, though.

In the midfield, Arsenal prioritised vertical passes to Ozil and Wilshere. Xhaka and Ramsey tried to get the ball into them in the half-space, to allow them to unbalance City’s defence through combinations with the full-backs. However, they failed to find a way of penetrating City’s defensive line when it dropped deep. Their attempt to unbalance City’s defence through playing wide did not pay off, and Aubameyang went largely under the radar. At no point did they seem as if they would offer any real threat to Claudio Bravo’s goal.

On the counter-attack, they tried to take advantage of City’s high defensive line. They looked for Aubameyang’s runs in behind his marker, and tried to get midfield runners – mostly Ozil or Wilshere – to support as quickly as they could. Later in the game, as their desperation for a goal grew, they became more rushed in their decision-making.

Manchester City started in a 4-3-3, which moved to a 4-4-2 when defending. Pep Guardiola continued with Claudio Bravo as his cup keeper and started Vincent Kompany alongside Nicolas Otamendi over John Stones or Aymeric Laporte in defence.

They tried to prevent Arsenal from playing out from the back whenever David Ospina passed to Laurent Koscielny. Leroy Sane marked Shkodran Mustafi, Kevin De Bruyne pushed up to mark Calum Chambers, while Sergio Aguero pressed Koscielny to close off the pass wide and force him to go long.

The main objective was to prevent Arsenal building through the midfield and so protecting their own back line from exposure. Fernandinho, who came off injured in the 52nd minute, was the man tasked with preventing vertical passes into Wilshere and Ozil and interrupting Arsenal’s fluidity, while Ilkay Gundogan, David Silva and De Bruyne were never far from Granit Xhaka and Aaron Ramsey. The defensive depth of Guardiola’s team prevented openings being created in their own half: they adjusted their distances between each other and dropped back if necessary.

Their defenders were individually and collectively dominant in their defensive third. Kyle Walker worked hard to prevent Kompany being put in one-on-one situations. Otamendi, who can be uncomfortable defending high up the pitch, was supported by the watchful Bravo in situations where Aubameyang could run in behind. Their defensive structure, when they dropped deep, did not allow for gaps in between players – in this way, they managed to restrict Arsenal from having shooting opportunities.

In the offensive transition, City alternated between short, combination passes when Arsenal dropped back quickly, and direct passes when they managed to win the ball back in midfield and the final third. In this way, they looked to take advantage of any disorganisation in Arsenal’s defence through the runs of Aguero or Sane.

On the attack, Guardiola’s team could not employ their usual dynamic, possession-oriented game as they were faced with difficulties in a midfield that Arsenal worked hard to make as compact as possible – neither Silva nor De Bruyne could find the space they usually enjoy. Instead, Bravo looked wide to Walker or Danilo to avoid this, but also wasn’t averse to going long – a tactic that perhaps surprised Arsenal and led to the opening goal for Aguero.

In the final third, the front three used their continual movement to unbalance the Arsenal back three and break into gaps in the opposition defensive line. The intelligence and pace of their runs, together with the supporting movement of their teammates, dragged the back three into uncomfortable areas as long as Wenger persisted with his formation.

Prevented from employing their usual dynamic, possession-based game, Manchester City showed their versatility to threaten Arsenal in other ways. Their first goal came from a long ball, the second from a low pass from a corner and the third as a result of an inside dribble and assist from a full-back.

City pressed Arsenal man for man when they were playing out from the back, to force them into playing it long. Sergio Aguero was responsible for cutting off the main supply route into midfield by pressing Laurent Koscielny, the Arsenal defender most comfortable on the ball.

Neither team were able to dominate in midfield, with both sides set up to starve the other of dangerous possession in these areas.

Arsenal displayed significant defensive fragility in their own third, committing both individual and collective errors. All three City goals could be attributed to defensive weakness.

The Gunners could not find a way to make any great impact in the final third. Wenger’s forward line went under the radar throughout the game, never finding the necessary spaces to penetrate City’s defensive line.