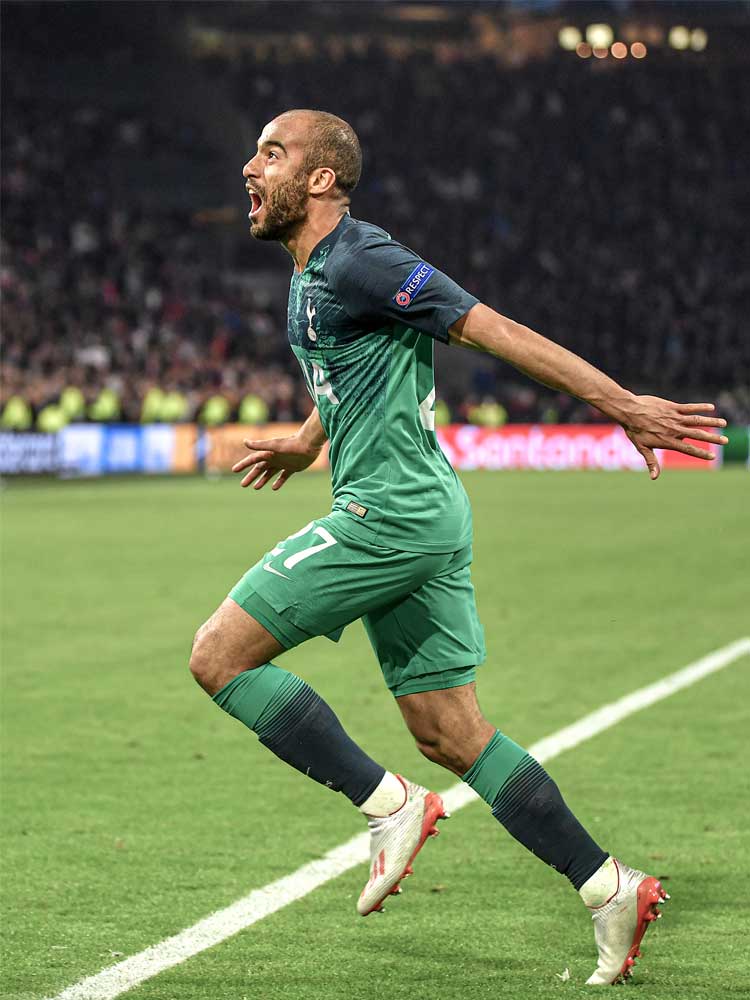 Twenty-four hours after Liverpool produced a footballing miracle to beat Barcelona and reach the Champions League final, Mauricio Pochettino and Tottenham followed their lead. Ajax had left north London with a 1-0 lead after the first leg of their semi final eight days earlier, and doubled their advantage through a trademark header from their captain Matthijs de Ligt as early as the fifth minute. The visitors had their moments, but their hopes looked gone when Hakim Ziyech put Ajax 3-0 ahead on aggregate with a finish past Hugo Lloris late in the first half. Pochettino turned to Fernando Llorente at half-time, and the Spanish striker gave Tottenham a focal point for their quicker attackers to work off. Enter Lucas Moura, who struck twice within five minutes to bring Spurs level with half an hour to go – and scored again in the sixth minute of added time to secure a dramatic and emotional victory on away goals. Moura wept with joy, as did his manager and very possibly every Tottenham fan both in the stadium and out. 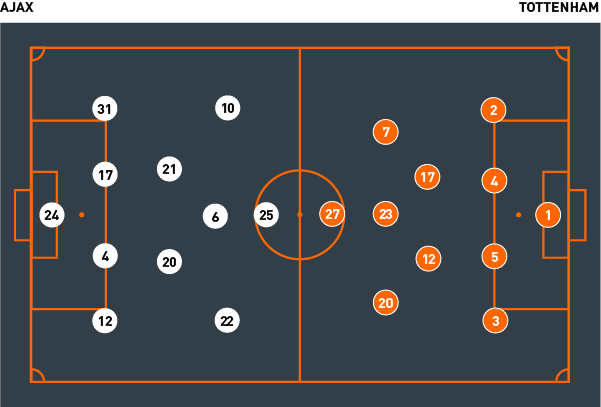 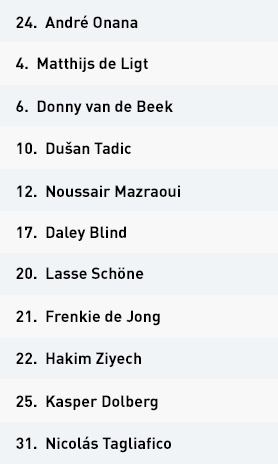 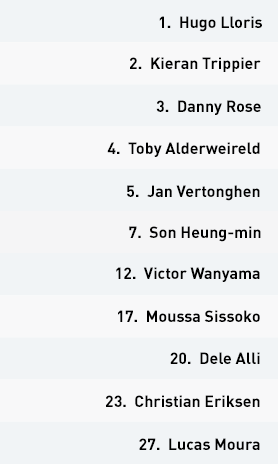 Ajax were set up by Erik ten Hag using a 4-2-3-1 structure in which Dusan Tadic attacked from the left and Kasper Dolberg as their central striker. Doing so initially gave them more width in possession, as Tadic attacked around Tottenham's right-back Kieran Trippier, and Donny van de Beek supported as their number 10. Their threat from wide led to an early corner from which Matthijs de Ligt headed the opening goal.

The hosts’ 4-2-3-1 often turned into a 4-3-3 when defending, through Lasse Schöne pressing higher on to Tottenham’s ever-deepening double pivot, putting more pressure on the visitors’ shorter build, but not necessarily helping the hosts regain the ball high. If anything, it gave more room in front of their back line for Christian Eriksen and Dele Alli to rotate, drift and receive passes between the lines. As Spurs enjoyed a significant spell on the ball, Schöne subsequently held his ground in a reformed 4-2-3-1.

Dolberg moved away from Tottenham’s central defenders, to bounce and link play around Spurs' double pivot. With Van de Beek still supporting Tadic towards the left, Hakim Ziyech moved infield from the right to attack in central areas. Their movements maintained an overload around Tottenham’s deeper midfielders, yet still allowed for dangerous combinations from the left – it was from one such move that Ziyech sent a superb shot past Hugo Lloris to double Ajax’s lead on the night and to give them a three-goal cushion by half-time.


As Tottenham played more crosses during the second half, Ajax’s defensive block deepened once more, prioritising numbers inside the penalty area over higher pressure on the ball. Through Eriksen playing deeper in place of the withdrawn Victor Wanyama, Spurs had even more control during their build; higher pressing only left more gaps for their attackers to exploit. The visitors scored from a counter after Ajax committed too many players forwards at an attacking set-piece and then struggled to be compact around the second ball.

By then, Ajax’s intricate combinations between Tottenham’s full-backs and central midfielders had vanished. They instead searched for more direct passes in behind the visitors’ higher back line – not just to create chances, but also to relieve the increasing pressure they were under.

Tadic eventually moved into the centre of their attack, from where his movements helped split Tottenham’s centre-backs. Frenkie de Jong also started to drive forward for the first time, into the space created by Spurs committing more numbers around Llorente, and Ziyech hit the post after a well-worked break with less than 15 minutes remaining. The hosts, however, succumbed to intense pressure in the sixth minute of added time.

Mauricio Pochettino organised Tottenham into a 4-2-3-1 structure in which their early attacking width was created by their full-backs Danny Rose and Kieran Trippier. Moussa Sissoko dropped into their back line to cover those full-backs’ advances, and Son Heung-min moved infield from the right to join Lucas Moura behind Ajax’s double pivot.

After going behind, the visitors enjoyed a period of possession that eased the pressure they were under. Christian Eriksen operated as a central number 10, and Dele Alli and Son supported around Moura. The double pivot of Sissoko and Victor Wanyama moved deeper to draw out Lasse Schöne and Donny van de Beek, affording Eriksen more central space because only Frenkie de Jong was free to mark him. With Alli and Son providing forward runs to support Moura, Spurs always had players attacking to between Ajax’s centre-backs and full-backs.

During Ajax’s lengthier spells of possession, Tottenham managed the hosts’ rotations effectively. They formed a 4-4-1-1 defensive block, via Son and Eriksen adopting wider midfield roles. Alli was responsible for shadowing De Jong, and Moura pressed Ajax’s centre-backs. Their only consistent defensive concerns came from Ajax’s persistent overloads in the left inside channel, where Tadic and Van de Beek combined effectively between Trippier and Sissoko.

As the hosts pushed more players infield from the right, however, spaces opened up for Rose to assist transitions into attack. Spurs regularly threatened there – both Eriksen and Son had good opportunities to score, although neither tested André Onana. Despite looking the more controlled of the two teams, the visitors then conceded a second when Hakim Ziyech drifted infield from the right to finish a move that had started when Trippier ceded possession to Tadic.

Fernando Llorente was introduced for Wanyama at half-time, and he immediately gave Tottenham a much-needed physical presence against Ajax’s central defenders. Eriksen moved deeper alongside Sissoko, and Son, in particular, took up a wider role on the left that allowed Rose to make frequent progress through the inside channel. Along with Trippier on the right, Tottenham had three crossing options into Llorente, but with Ajax naturally drawn to him, runs away from the ball made by Moura and Alli added to Tottenham’s attacking threat. Eriksen’s fine ball into Alli was a sign that Tottenham were getting close to a goal and, within moments, Moura had run on to Alli’s ball to score his first.

Spurs’ rotations within their front line were starting to look beautifully choreographed, and Son increasingly joined Alli, Moura and Llorente in attacking the width of the penalty area – them doing so forced Ajax’s defensive block back even further. With Trippier and Rose advancing higher and higher in wide territory, Trippier’s first-time cross should have been finished by Llorente, but Moura was again in position to convert the rebound.

With Tottenham pushing numbers forward around Llorente, Ajax reacted well. De Jong was able to exert an increased influence from a less congested midfield, and Ziyech and substitute Daley Sinkgraven pinned Trippier and Rose back further. In truly remarkable fashion, however, Moura completed his hat-trick in the sixth and final minute of added time. Tottenham, against the odds, reached the Champions League final.