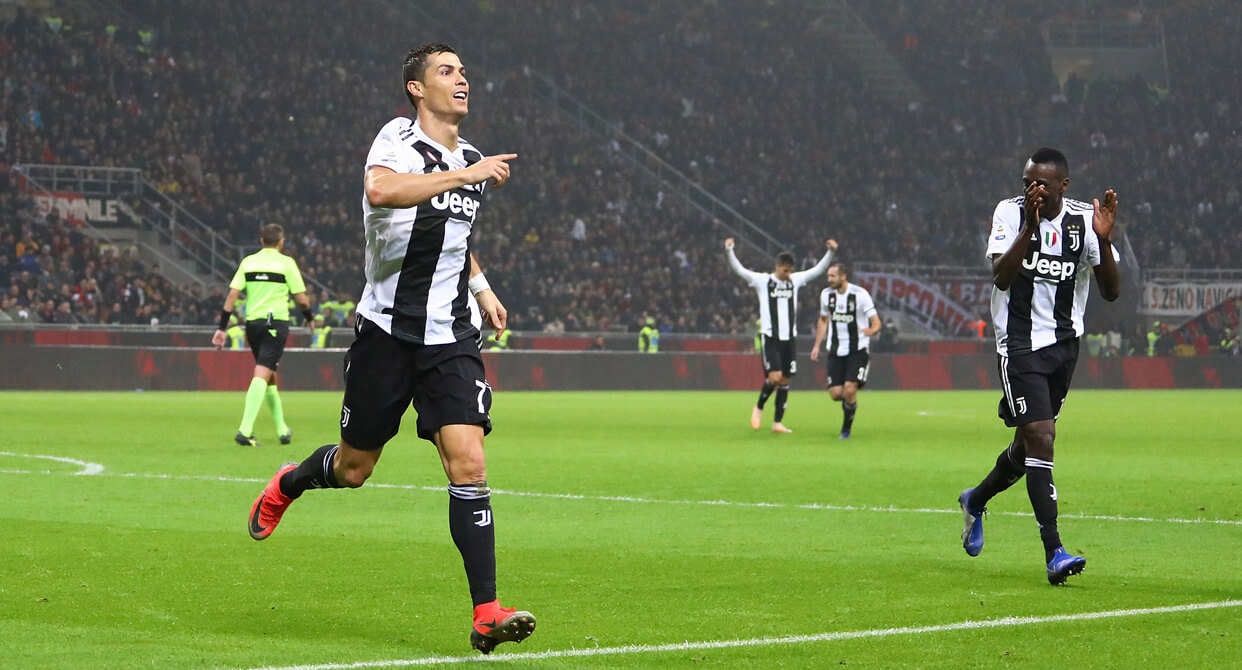 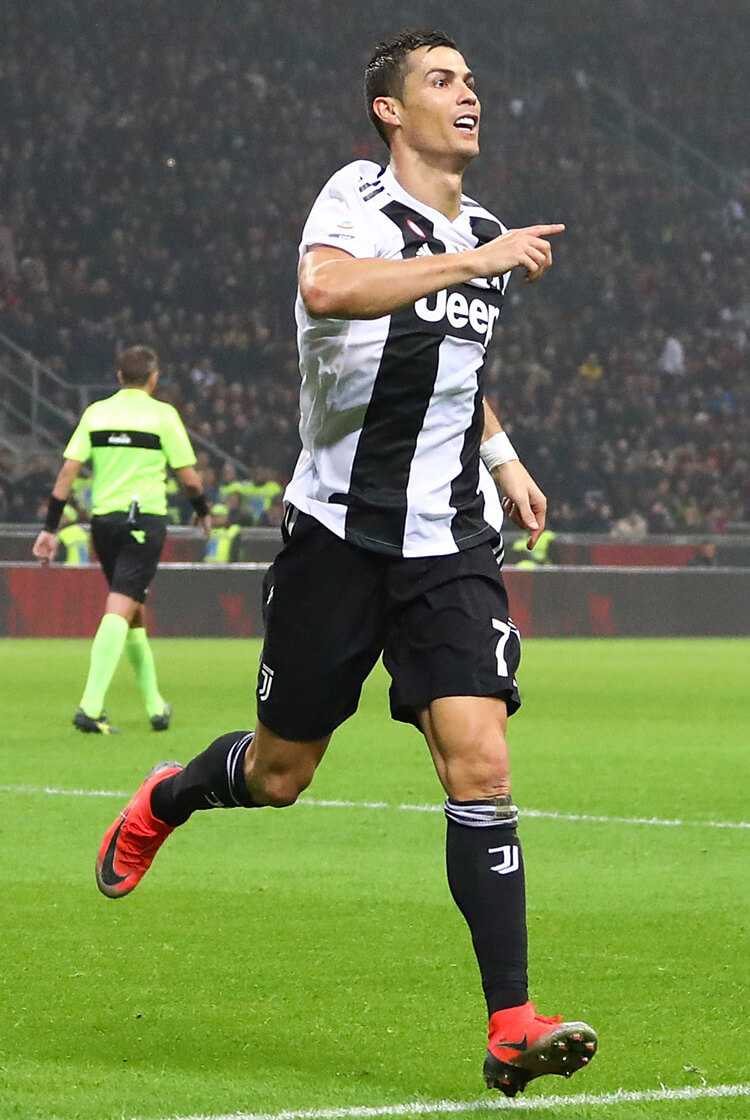 Defending champions Juventus maintained a six-point lead at the top of Serie A with this comfortable 2-0 victory away at supposed rivals AC Milan. Mario Mandzukic rose to head home a superb Alex Sandro cross to give the visitors the lead in the first 10 minutes, and Massimiliano Allegri’s men rarely ever looked in trouble beyond that. Former Juve forward Gonzalo Higuain endured a torrid evening against his old team, having a first-half penalty tipped on to the post by Wojciech Szczesny before eventually receiving his marching orders late on. Cristiano Ronaldo secured the three points with a typically emphatic finish 10 minutes from time, as Juve’s domination of Italian football shows no signs of abating any time soon. 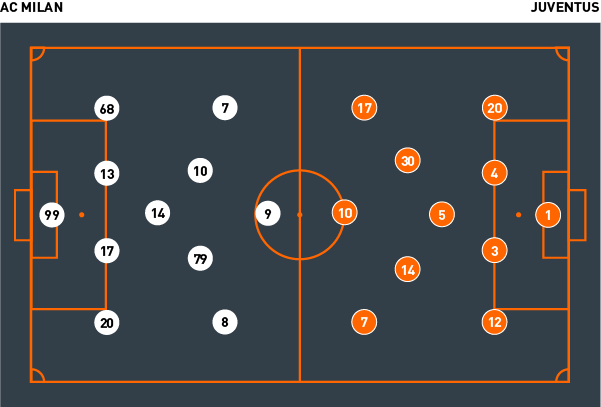 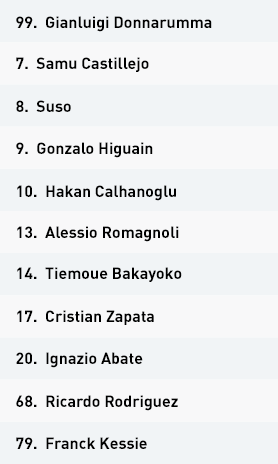 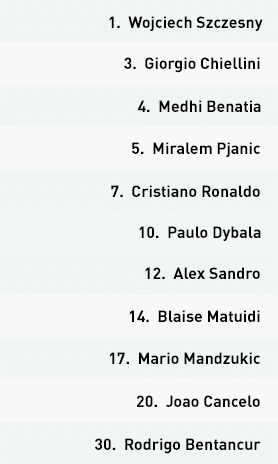 Milan initially set up in a 4-4-1-1 shape, with Samu Castillejo playing as a secondary striker behind Gonzalo Higuain. However, the hosts’ first-half play lacked invention and tempo. Gennaro Gattuso’s deployment of wrong-footed wingers, with Suso coming in from the right and Hakan Calhanoglu doing likewise from the left, only added to a central area already packed thanks to a compact Juventus formation.

Even during transitions Milan failed to threaten, with Higuain struggling to protect the first pass forward. The Argentine also lacked supporting runners from deep, as Milan’s midfield wanted the ball to feet rather than in behind. They eventually converted into a 4-5-1 shape, as Castillejo moved from the secondary striker role to the left of midfield. From here, Calhanoglu moved infield, creating a central midfield trio with Tiemoue Bakayoko and Franck Kessie. This resulted in slightly more positive spells during transitions, as the wide players weren’t so preoccupied with dribbling infield and trying to beat multiple players.

However, Milan lacked true quality on the ball as they approached the final third, with no shots inside the Juve penalty area in the entire first half. That was until the hosts were given an unlikely lifeline, in the form of a surprise penalty decision via the help of VAR. Higuain stepped up, but couldn’t beat Wojciech Szczesny as the ball flicked off the post and away from danger.

Milan’s second-half performance involved more direct and longer balls forward, as they pushed central-midfield runners higher and targeted the spaces in behind the Juventus defence. Giorgio Chiellini and Medhi Benatia won most of the ensuing aerial battles, but the hosts did have some success collecting loose second balls and using their full-backs to deliver crosses into the penalty area. They lacked the presence to really threaten, though, and their frustrations were summed up in the Higuain loss of temper that led to his dismissal.

Out of possession, Milan’s 4-4-2 structure was broken as early as the eighth minute. Paulo Dybala’s dropping movements into central midfield created an early overload for the visitors. From here, Milan couldn’t get near the ball, as Juve switched the play using the width provided by their full-backs. A deep cross to the far post saw Mario Mandzukic nod home the opener. Moments later, he nearly grabbed an identical second.

Milan’s 4-4-2 block continued after conceding, but they struggled to handle Juventus’ fluid rotations, particularly as they built from deep. With Dybala continuing to drop deeper, Milan needed a numerical rebalance within central midfield. Both Higuain and Castillejo reduced their distance from their teammates in midfield, hoping to nullify the impact of Juventus’ central combinations.

For a period, Juve’s attack lost its edge as Milan’s compact 4-4-2 did its job. From here, though, the hosts lost any hope of attacking themselves. Castillejo and Higuain were too far away from the goal to mount serious attacks, while central midfielders Bakayoko and Kessie lacked the quality needed to progress through such a compact central lane.

The home side’s defensive structure eventually shifted to a 4-5-1, as their more direct play with the ball created more transitional spells. Whenever Juventus did settle on the ball, Milan dropped deeper, hoping to hit Juventus with counter-attacks from deep. Even with a new defensive structure, the visitors still grabbed a decisive second, with Cristiano Ronaldo confirming all three points for the Serie A leaders.

Juventus initially set up using a 4-3-3 attacking structure, and took the lead inside eight minutes. Converted winger Mario Mandzukic, starting on the right of a front three, rose above Ricardo Rodriguez at the far post to meet a superb Alex Sandro cross and power home a header. Many of the Croatian’s goals over the years have come from similar positions on the left, but this role-reversal proves his effectiveness across the final third.

As the dust settled after such an early strike, Paulo Dybala’s deeper positioning ensured Juventus enjoyed total dominance of the midfield third. As is his usual role, Miralem Pjanic dropped the deepest of the midfield trio, helping his central defenders build from the back. With Dybala now dropping in as a fourth midfielder, Juve fluidly rotated into what was in effect a 3-5-2, with Cristiano Ronaldo operating from the left of the attack.

Mandzukic would vary his movements as Dybala dropped – sometimes remaining on the right, which left the visitors with no central striking presence. From here, Ronaldo had space to drive inside and directly shoot on goal, with Sandro continuing to overlap from left-back. Should Mandzukic move into the central lane, Ronaldo would look to attack around Milan right-back Ignazio Abate and cross for his strike partner to attack.

Juventus’ attacks reduced towards half-time, as Milan changed to a 4-5-1 structure and countered their opponents’ midfield overload. Their quality on the ball still shone through as, a missed Milan penalty aside, they controlled possession through to the interval.

The visitors’ dominance continued early in the second period, as Dybala’s dipping free-kick struck the outside of the post. Otherwise, their lack of intent to attack quickly or directly served to kill the game, with Dybala’s repeated movements into midfield helping his side regain any loose balls and build within the midfield third. The full-backs rarely joined any attack together, perhaps wary of potential Milan breaks.

A determined yet controlled second-half performance saw the visitors comfortably home, with Ronaldo getting on the scoresheet late on, smashing home after Gianluigi Donnarumma had spilled Joao Cancelo’s cross/shot effort.


Out of possession, Juventus converted into a 4-3-2-1 shape and prioritised blocking Milan’s access within the central lane. With Milan eventually looking to the wide areas to avoid the congested central block, Juve’s wider central midfielders – Blaise Matuidi and Rodrigo Bentancur, both excellent ball-winners – applied pressure to Milan’s full-backs as they stepped out of the back line. This meant Dybala and Mandzukic could stay as a central duo behind Ronaldo, who remained the highest attacker. From here, Juventus could also adopt a 4-2-3-1 structure; they switched between these two formations as the ball moved back and forth between the centre and wide areas.

In the second half, the visitors were faced with more long and direct passes, which stretched their compact defensive structure. Matuidi and Bentancur continued to press Milan’s full-backs, which only prompted Milan to go long sooner. From here, the home side used central midfield runners to support lone forward Higuain – and so it became a battle of first and second ball, with Giorgio Chiellini typically instrumental in winning first contacts. Whenever the away side subsequently won second balls in central midfield, they intelligently drew fouls to reduce Milan’s momentum and effectively kill the game. Twelve games in, they lead the Serie A table by six points.