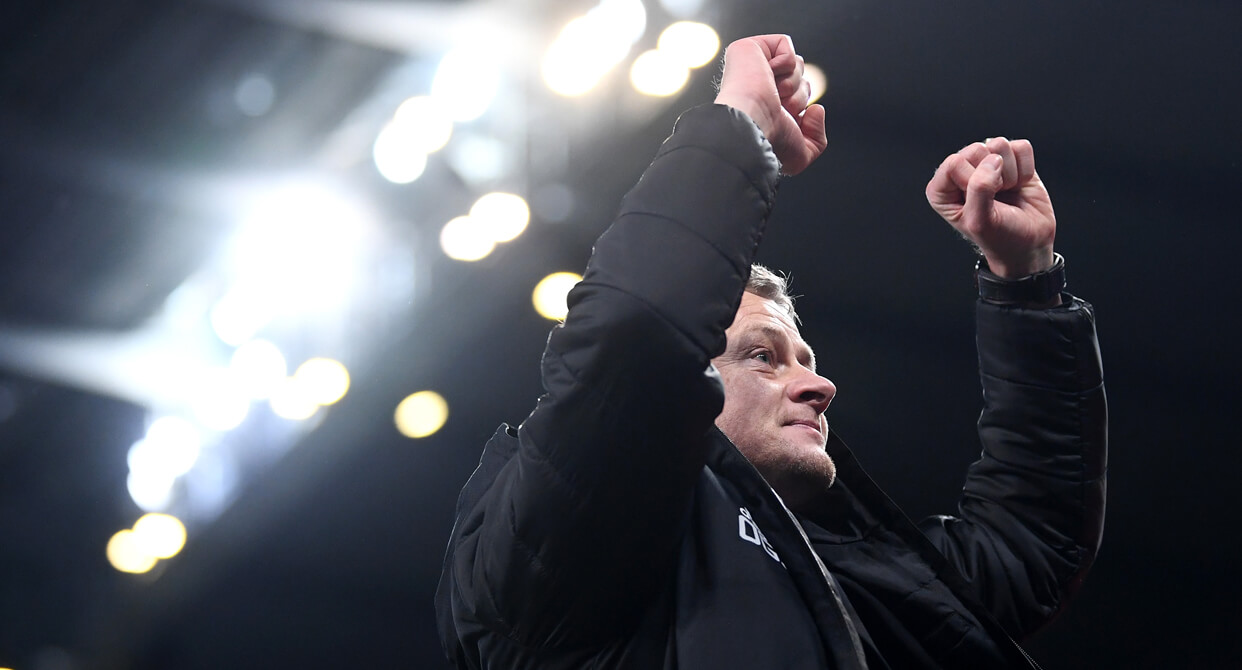 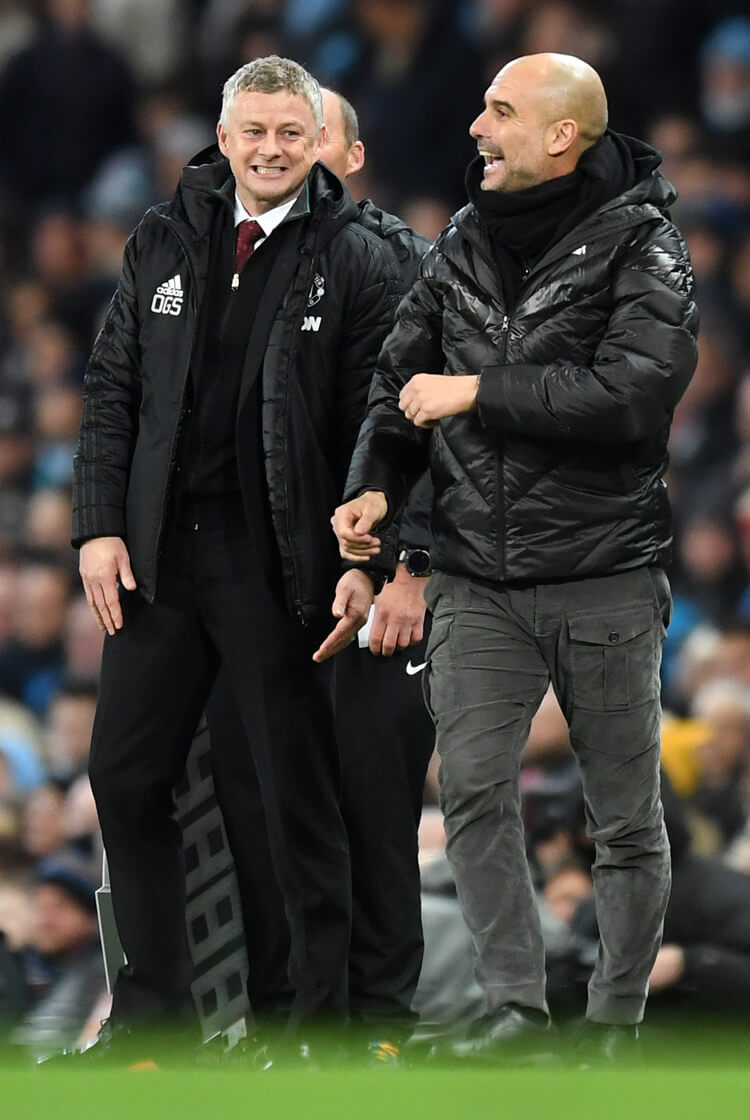 The second half of our experts' Premier League round-up from the weekend fixtures looks at huge away wins for Manchester United and Arsenal, valuable come-from-behind victories for Sheffield United and Newcastle United, and an entertaining score draw between Brighton and Wolves. First, though, to the Manchester derby.

Manchester City 1 Manchester United 2
Manchester United made it a memorable week in the league, as they added to their victory over Tottenham Hotspur – and former head coach José Mourinho – with a surprise win over rivals Manchester City. Although the home side largely dominated possession, it was the visitors’ fluid and sharp counter-attacking that secured a 2-0 lead – and, ultimately, the victory that could have put the final dent in City’s bid for a third consecutive title.

It was Lingard’s supporting movements into the left-inside channel which caused further issues for the hosts. Kyle Walker’s pace at right-back did help stem a proportion of the counter-attacks, but he wasn’t always behind the ball as possession was turned over (above) as United eventually took advantage of their chances to take a two-goal lead.

Fred’s delayed support from the double pivot is a growing feature of United’s attacking play, especially in support of James on the right. Lingard and Fred thus provided extra support around central striker Martial, creating a transitional three-against-three against the two City centre-backs and single pivot Rodri. This extra central presence from Fred also helps take defensive pressure away from the likes of James and Rashford, who subsequently continued to be the main threat on the City goal.

West Ham 1 Arsenal 3
A nine-minute flurry saw Arsenal come back from a goal down to secure a first win for caretaker head coach Freddie Ljungberg. The result added further pressure on to West Ham boss Manuel Pellegrini, who has seen his side win just once in their past 10 league outings.

Sead Kolasinac’s introduction for the injured Kieran Tierney enabled Gabriel Martinelli’s inside movements from the left; although Tierney’s crossing is generally more accurate, Kolasinac’s endeavour when underloaded gives the team more overlapping potential. This showed for the visitors when his successful cut-back set up Martinelli to slot home the equaliser from a central position.

Playing the likes of Mesut Özil, Pierre-Emerick Aubameyang, Nicolas Pépé and Lucas Torreira in their strongest positions also contributed to the exploitation of West Ham’s lack of second-half compactness. Özil’s lateral movements around the side of the hosts’ double pivot (above) helped create a constant link into Arsenal’s front line, with a central Aubameyang menacing in behind and Martinelli moving inside to occupy the other central defender.

West Ham wingers Robert Snodgrass and Felipe Anderson left spaces around the double pivot of Declan Rice and Mark Noble, for Özil in particular to maintain his wider attacking link. Granit Xhaka and Torreira offered between and around the hosts’ first line of central pressers, to then look for Özil and co behind a ragged West Ham midfield.

Newcastle 2 Southampton 1
A relatively uninspiring first half gave way to a more energetic second period, as Newcastle came back from behind to make it two wins on the spin for Steve Bruce. Danny Ings put the visitors ahead early in the second period, but Andy Carroll’s introduction worked to narrow Miguel Almirón and Allan Saint-Maximin and create extra pressure on the Southampton goal.

Up against the visitors’ 4-4-2 structure, Newcastle initially struggled to connect with their front line. With the dangerous Saint-Maximin occupying the left side throughout the first half, the hosts lacked central support around Joelinton, with only Almirón and central midfielder Isaac Hayden offering sporadic and ineffective late runs into advanced areas.

Soon after Ings had opened the scoring, however, Bruce turned to Carroll and a new attacking approach. The powerful striker dropped short to attack and mostly win direct balls against the visitors’ central midfielders (above). Wing-backs Jetro Willems and Javi Manquillo moved much higher to pin back the Southampton full-backs, allowing the hosts to push Almirón and Saint-Maximin inside to occupy Southampton’s central defence. With Hayden moving forward too, Newcastle had enough numbers to secure the second ball and profit from Carroll’s dominance.

Jonjo Shelvey’s deeper role at the tip of a defensive diamond also helped block any transitional access into the visitors’ forwards, although it was actually a Shelvey bullet header from a Carroll cross that brought the hosts level before Federico Fernández’s late winner.

Norwich 1 Sheffield United 2
Sheffield United continued their impressive away form – they are yet to taste defeat – in coming from behind to win at Norwich. Despite no tactical or personnel changes by head coach Chris Wilder, the intensity of the visitors’ pressing, and the quality of their attacking play around Norwich’s 4-2-3-1 shape, improved after a poor first half. Wing-backs Enda Stevens and George Baldock scored the Blades’ goals, as their altered movements in the three central lanes posed Norwich a different problem.

United generally look for central supporting runs from the two advanced midfielders – John Fleck and John Lundstram – as the wing-backs deliver crosses into the penalty area. Here, narrow inside runs from Stevens and Baldock gave the support around the two central forwards. Lundstram was often seen supporting the right side, with right-sided centre-back Chris Basham also moving forward to link from the wide area before joining as another central runner (below).

Fleck helped Oliver Norwood cover the central lane for any defensive clearances (above), as the visitors often had both wing-backs attacking inside the width of the penalty area simultaneously. The hosts were naturally wary of the threat United’s front line carried from any subsequent crosses, but with Basham also joining the attacks the visitors dedicated the numbers forward that ultimately helped them secure another very useful victory.

Where possible, the visitors looked to play around the first two defensive lines in Brighton’s 4-3-3 mid-block. Wider positioning from Matt Doherty and Adama Traoré on the right, and Jota and Jonny on the left (below) helped horizontally stretch the hosts’ back line. Once the visiting defence – and dropping central midfielder João Moutinho – had lured Brighton’s pressure into the central lane, the visitors then looked for switches and wider combinations.

When attacking the opposing wing-back and central defender on that flank, Wolves occupied both the wide areas and inside channel, with the respective wing-back and wider forward on both sides alternating their positioning to attack different vertical lanes (above).

Raúl Jiménez then occupied the remaining central defender, and proved a useful third-man link to provide further penetration to their attacking moves – as seen superbly for Wolves’ first goal.