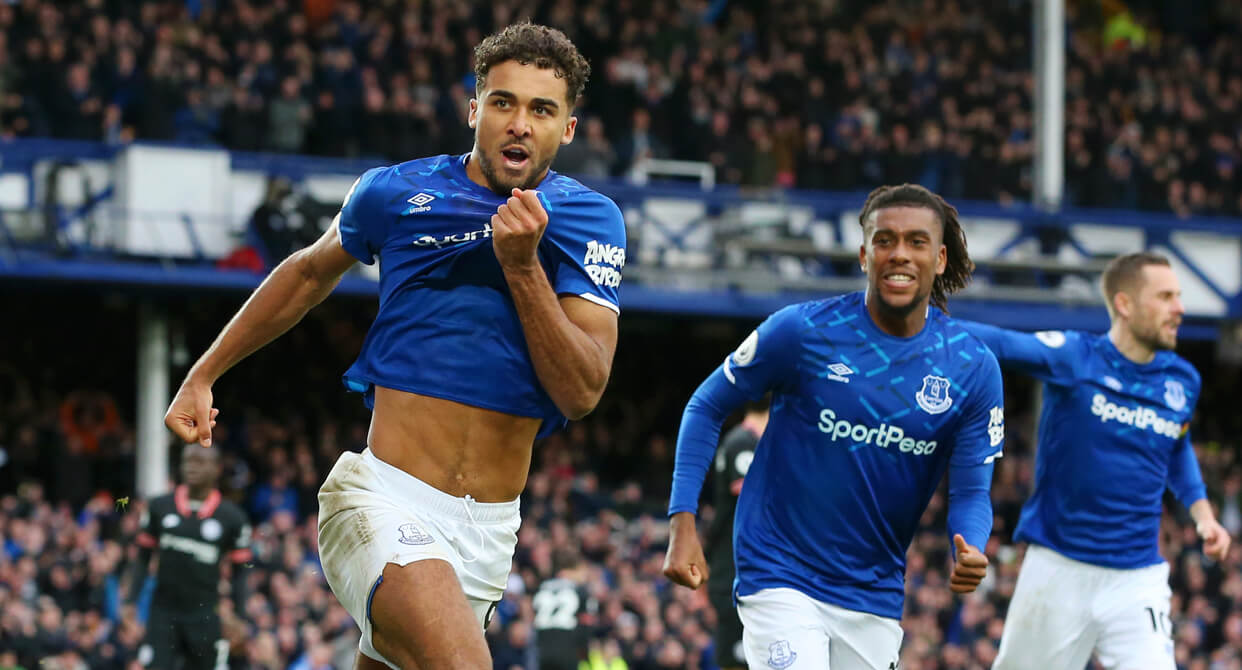 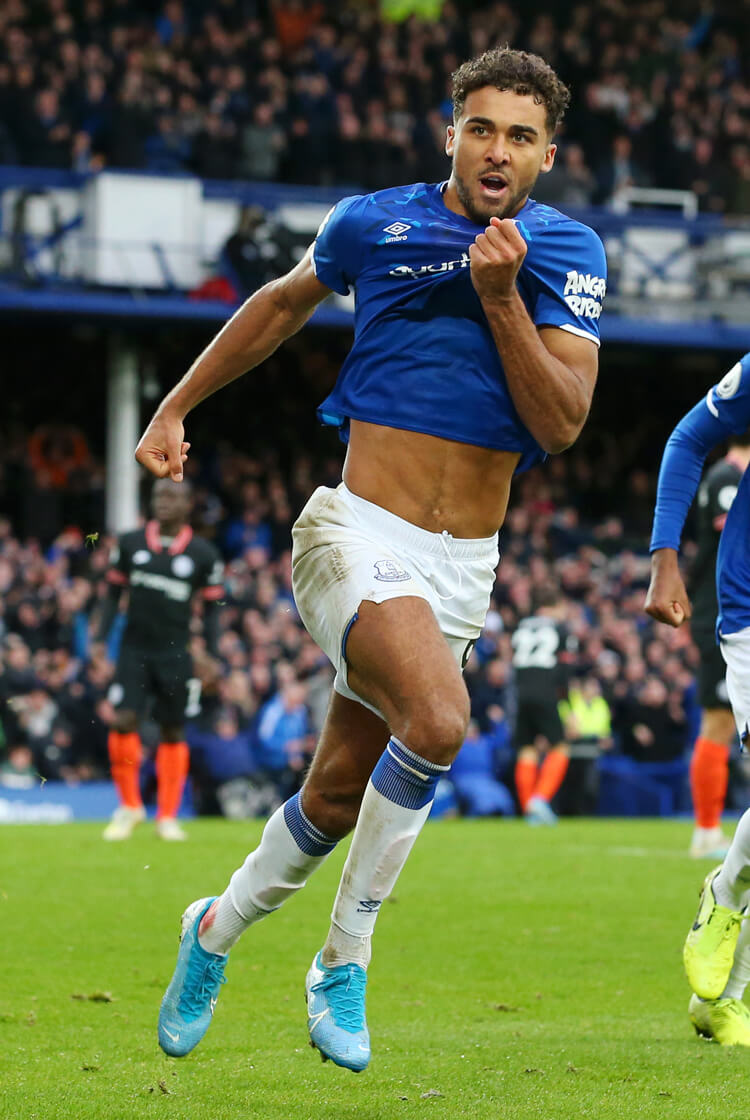 Liverpool and Leicester maintained their breakneck pace at the top of the Premier League with impressive respective away wins at Bournemouth and Aston Villa, while Tottenham impressed in thrashing Bournemouth and Watford played out a goalless draw against Crystal Palace. We start the first part of our weekly review at Goodison, however, where Duncan Ferguson inspired his temporary charges to victory against Frank Lampard and Chelsea.

Everton 3 Chelsea 1
Chelsea had the majority of possession at Goodison on Saturday, but it was the right side of the Everton attack that provided the clinical, match-winning edge under caretaker manager Duncan Ferguson. The hosts’ direct play into forwards Dominic Calvert-Lewin and Richarlison – both of whom can compete in the air – gave them a simple yet efficient method of penetration into the Chelsea half; but it was Calvert-Lewin’s presence towards the right that gave César Azpilicueta and Kurt Zouma all manner of problems.

When either of the forwards dropped shorter, Chelsea’s central defenders were dragged further apart as they were forced to step in and help the diminutive double pivot of N’Golo Kanté and Mateo Kovacic in front of them. With the choice of either diagonal supporting runs from wide midfielders Theo Walcott and Alex Iwobi (below), or quick central combinations between the two forwards, Everton’s narrow penetrative movements led to a number of good chances.

Whenever an Everton move broke down, the visitors looked to bypass Everton’s midfield and work the ball into wingers Willian and Christian Pulisic, who rarely tracked back out of possession. With the hosts’ central midfield pairing blocking any immediate transitional access into number 10 Mason Mount (above) and lone centre forward Tammy Abraham, Chelsea tried to take advantage of Everton’s high wingers.

But the combative nature of Everton’s display out of possession frustrated Frank Lampard’s team, as a season Premier League high of attempted tackles showed the kind of courage and resolve recently lacking at Goodison. Despite a brief moment of resurrection from Kovacic’s low strike from distance, defensive errors from the Chelsea left resulted in a third league defeat in their past four outings.

Bournemouth 0 Liverpool 3
Visitors Liverpool kept their first clean sheet since late September, with a 3-0 victory that inflicted more pressure on struggling Bournemouth. Naby Keita made his first league start of the campaign, and delivered an impressive performance in central midfield that inspired Liverpool to further cement their place at the top.

Keita’s versatility from Liverpool’s right side proved useful in the first half, as his positioning between and beyond Philip Billing and Ryan Fraser helped the visitors connect into a narrow Mo Salah (below). Keita’s ability to receive on the move and power forward with the ball helped lure members of Bournemouth’s back line forward, creating extra space wide for the overlapping right-back Joe Gomez (later Trent Alexander-Arnold).

Keita’s driving also helped connect with a central Salah, with the Bournemouth back line heavily pinned back by the high positioning of both Roberto Firmino and Alex Oxlade-Chamberlain. With Andy Robertson also consistently advancing from left-back, Keita became the key link between midfield and attack, as both his guile between the lines and ability to release the play into runners were outstanding.

After scoring the second, he also created Liverpool’s third for the dangerous Salah, to wrap up the points on a day that could come to be seen as the one on which Keita’s Liverpool career really started.

Tottenham 5 Burnley 0
An emphatic and energetic start from Tottenham Hotspur helped kill off Burnley, with José Mourinho’s side grabbing two early goals. The dominance of the left inside channel, inspired by the incisive combinations from Dele Alli, Harry Kane and Son Heung-min, carved the visitors open time after time.

Burnley eventually worked to overcrowd their right side in a bid to nullify the Spurs threat, but the hosts showed flexibility in their build-up to create even more chances. The double pivot of Eric Dier and Moussa Sissoko expanded, with the latter often drifting right-back to occupy Burnley’s left-sided midfielder (below). This often left right-back Serge Aurier alone in huge spaces to receive under little pressure and either combine with the supporting Sissoko or look inside towards Kane or the narrow Lucas Moura.

Aston Villa 1 Leicester 4
Leicester City continued their fine form with an eighth consecutive league win since falling to an unlucky late defeat at Liverpool, the team they are chasing at the top of the table, in October.

The Foxes set up in a 4-4-2 diamond at Villa Park, with attacking width coming from full-backs Ben Chilwell and Ricardo Pereira – but the roaming positioning of number 10 James Maddison helped create in behind Aston Villa’s full-backs.

Wider midfielders Youri Tielemans and Dennis Praet supported and covered their respective full-back partners, which also created a bigger gap for Maddison to operate in. He moved subtly in between the hosts’ centre-back and full-back (below), with Villa single pivot Marvelous Nakamba blocking direct access into the feet of the two Leicester forwards, Jamie Vardy and Kelechi Iheanacho, and therefore unable to follow Maddison too.

The Villa full-backs were forced to press out towards Chilwell and Pereira, as the corresponding centre-back then shuffled across to nullify Maddison. This created extra space for Vardy and Iheanacho to centrally rotate and attack any subsequent crosses.

With Iheanacho supporting Vardy, the latter – Leicester’s most dangerous finisher – had far less responsibility to the Foxes’ build than when he starts as a lone forward. This enabled him to maintain a higher attacking position throughout, with his running in behind leading to two of the visitors’ four goals in an excellent and ruthless display.

Despite a first half in which neither side managed a shot on target, Watford looked the more threatening in the second. Troy Deeney’s presence back in the hosts’ line-up was a positive, as the powerful forward looked to disrupt right-back Martin Kelly in the air (below); supporting runs for the second ball from Roberto Pereyra and Gerard Deulofeu helped penetrate beyond a stubborn and efficient Palace block. With Kelly dragged infield, right centre-back James Tomkins was forced to cover the Watford left – this created a central gap that Deulofeu penetrated a few times.

As Watford avoided a combative central midfield trio of Luka Milivojevic, Cheikhou Kouyaté and James McArthur (above), they began to apply pressure late on, with Deulofeu again dangerous. But the final touches deep in the Palace half lacked the quality required to create the chances from which they could have stolen a late and much-needed winner.