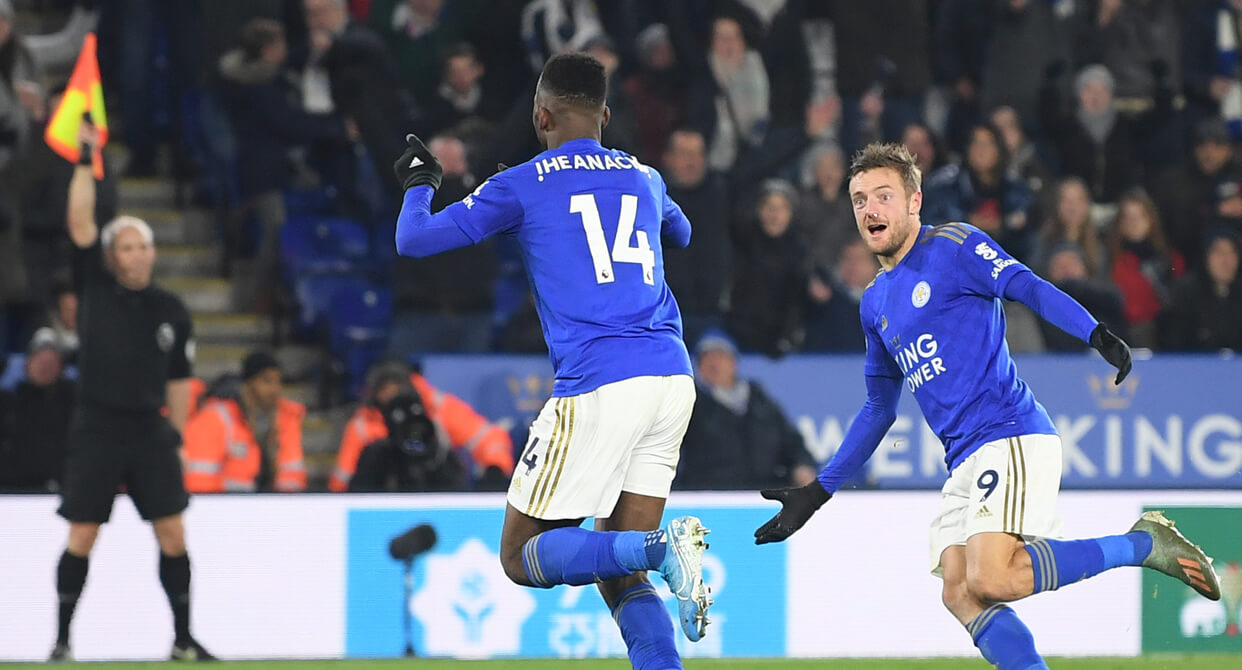 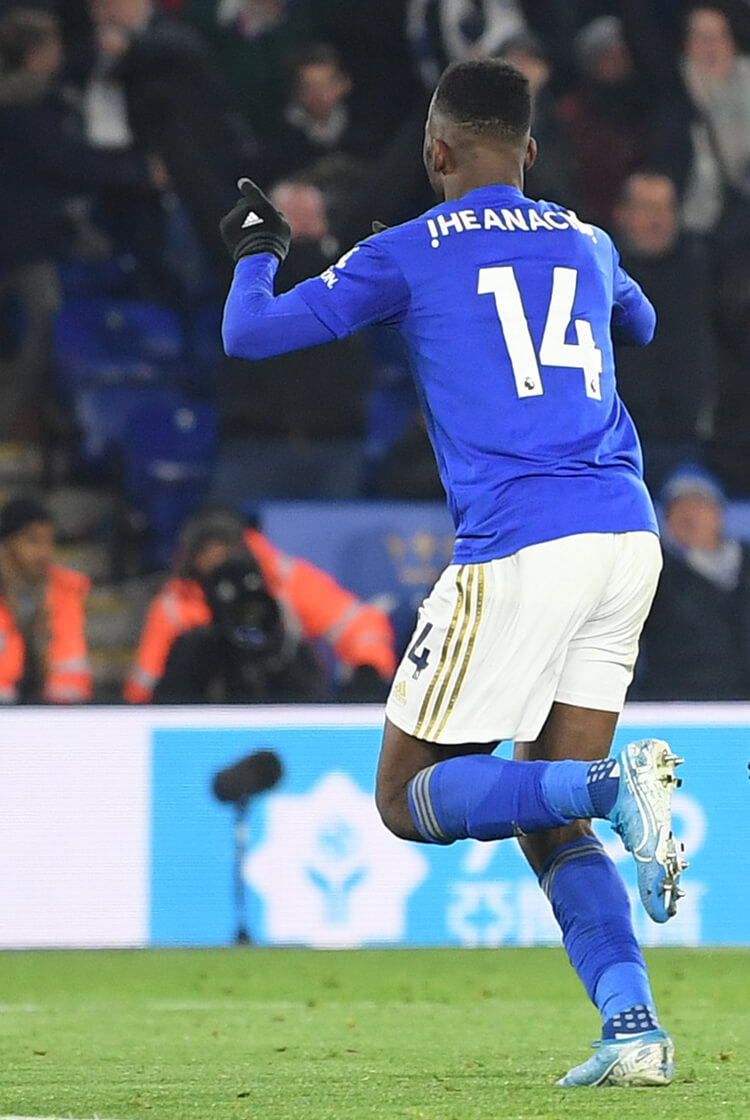 Manchester United failed to beat Aston Villa at home, while Arsenal were fortunate to draw at Norwich and Sheffield United maintained their unbeaten away record at Wolves. Southampton came from behind to leave Watford bottom of the Premier League and without a manager for the second time this season – but the second part of our weekend review kicks off in Leicester.

Leicester 2 Everton 1
Leicester City continued their fine run of form, as they came from behind to heap further misery on Everton and Marco Silva. The hosts looked most threatening once Kelechi Iheanacho was introduced midway through the second period, with the Foxes still trailing to Richarlison’s first-half header.

Ayoze Pérez, the man Iheanacho replaced just past the hour, had previously taken up positions just inside Everton left wing-back Lucas Digne, creating more central space for a burst forward from either Youri Tielemans or an underlapping Ricardo Pereira. But Pérez also moved further infield to become a second central forward around Jamie Vardy. Despite him taking up some very effective positions, Leicester lacked the quality and incisive movements to really threaten the Everton goal.

The introduction of Iheanacho still allowed for rotations and fluid movements around the visitors’ back line. Harvey Barnes and Pereira continued to provide width from either side (above) in the second period, as James Maddison and Tielemans roamed and supported in front of single pivot Wilfred Ndidi.

In essence, Iheanacho gave Leicester a second central-forward option in a 3-5-2 attacking structure, taking the sole focus off Vardy. He also offered an added transitional threat, as he showed to some effect at the end of a break that finished with his slotted winner past a despairing Jordan Pickford.

Manchester United 2 Aston Villa 2
Manchester United continue to struggle against newly promoted sides – after this draw at home to Aston Villa they have taken only 24 points from their last 15 matches against teams coming up from the Championship. Tyrone Mings’ equaliser just two minutes after Victor Lindelöf had put the hosts ahead means United have now relinquished six leads so far this season.

Villa started well, as Jack Grealish helped create from his wider role on the left. The captain was himself assisted by penetrative forward runs from Conor Hourihane and depth from left-back Matt Targett (below). Single pivot Douglas Luiz also drifted across, helping combine with Targett to free Grealish further ahead of the play. From here, Wesley occupied the United central defenders, with further support coming from John McGinn.

With the hosts’ central defence unwilling to leave the middle lane, Grealish was often free to attack the space wide of Aaron Wan-Bissaka or look to combine inside. It was from one such move that he put his team ahead with a rasping drive early on.

Ole Gunnar Solskjaer soon shifted his team into a 4-4-2 shape that meant Grealish found his previous combinations much harder to come by. Targett continued to overlap and Hourihane maintained inside runs to offer between the lines, but with the hosts having four midfielders back behind the ball the spaces between their lines were kept to a minimum.

Villa then had to look for alternative attacking approaches. With United killing the space around Grealish much quicker, the visitors’ right side opened up for brief moments of penetration. When they did manage to work the ball right, the Villa skipper looked to penetrate into the space vacated by Wesley dropping – and he almost latched on to a low ball across goal with the score at 1-1. Despite falling behind soon after, the visitors fought back to earn an excellent away point.

Norwich 2 Arsenal 2
Life after Unai Emery didn’t feel that different for Arsenal, who are now without a win in six league games. The Gunners started on the front foot, with Pierre-Emerick Aubameyang and Mesut Özil moving inside from their wide attacking positions to create space for full-backs Calum Chambers and Sead Kolasinac to provide attacking width.

This encouraged attacking transitions from Norwich, first in wide areas and later centrally. Arsenal’s central defenders were often exposed as the hosts found easy access into Teemu Pukki, who opened the scoring from one such counter-attack after 21 minutes.

The hosts maintained more possession in the second half, when their central, rotating triangle in attack consistently occupied the spaces between the lines (above). Onel Hernández’s width from the left helped pin Chambers back but also disconnected him from Arsenal’s back line.

With Todd Cantwell moving inside from the right, Arsenal’s two central defenders were always occupied – particularly with Kenny McLean moving deeper to disconnect Arsenal’s double pivot from the back line. Despite Aubameyang’s second equaliser of the game, Norwich dominated the final moments; only goalkeeper Bernd Leno’s superb handling saved a ragged Arsenal from defeat.

Southampton 2 Watford 1
Another Premier League defeat for Watford, this one at the hands of fellow strugglers Southampton, cost Quique Sánchez Flores his job. Despite taking an early lead through Ismaila Sarr – who threatened in transition throughout the first half – Watford succumbed to two late goals in the wake of attacking substitutions from Ralph Hasenhüttl.

The introduction of Shane Long to partner Danny Ings gave the home team a greater threat around Watford’s three central defenders, while Sofiane Boufal – a replacement for Nathan Redmond – increased the threat from the Saints left. Boufal established a connection into the front two – one of whom would drop towards the ball (below) – that coincided with the hosts’ best spell of attacking pressure.

Watford were forced to clear one effort from the line, while the hosts also saw an effort tipped on to the crossbar before Ings stole in to score the equaliser after good work from Moussa Djenepo on the right. James Ward-Prowse’s superb free-kick sealed a vital three points for the home side, leaving Watford rooted to the bottom of the table and without a manager for the second time this season.

Wolves 1 Sheffield United 1
Sheffield United remain unbeaten away from home in the Premier League this season, with Lys Mousset’s early strike earning them a point away at Wolves. The hosts are now unbeaten in nine league matches, after wing-back Matt Doherty grabbed a second-half equaliser.

It was Doherty’s inside runs in the first half that helped Wolves penetrate through Sheffield United’s organised 5-3-2 mid-block. Attacking width was largely provided by Adama Traoré on the right and left wing-back Jonny on the opposite flank. Diogo Jota moved inside to accompany central striker Raúl Jiménez.

Left-sided central midfielder John Fleck moved out to press Doherty on the Wolves right, as the visitors still had John Lundstram and Oliver Norwood to cover in central midfield. Whenever Fleck was individually beaten by Doherty’s combinations or diagonal drives inside, however, the hosts penetrated into the final third.

Wolves’ attacking threat continued to grow in the second half, with Traoré’s individual threat from the right a useful attacking outlet. The visitors responded by dropping Fleck deeper, sacrificing a central midfielder in a bid to halt Traoré’s growing influence.

Doherty’s inside movements around Jiménez (above), who himself remained more central to allow extra space for Traoré, helped disrupt the Blades’ central defence – and the Wolves pressure eventually told. Doherty headed home at the far post, with both teams claiming a point as they further secured their positions in the top half of the table.