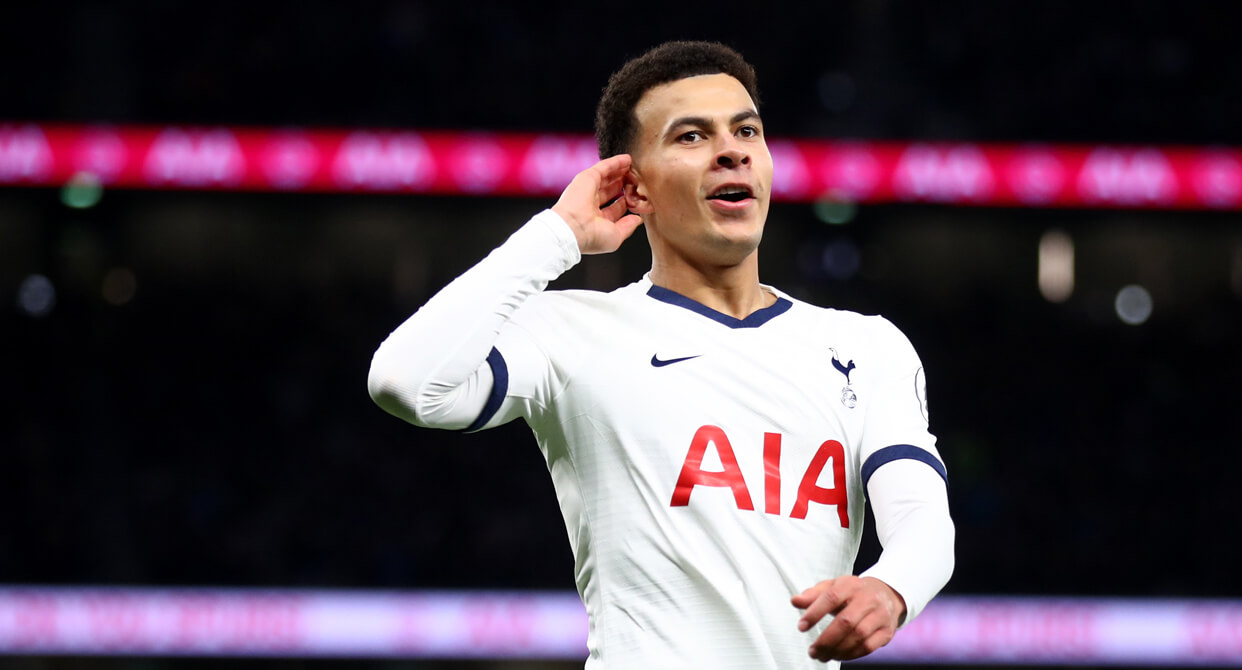 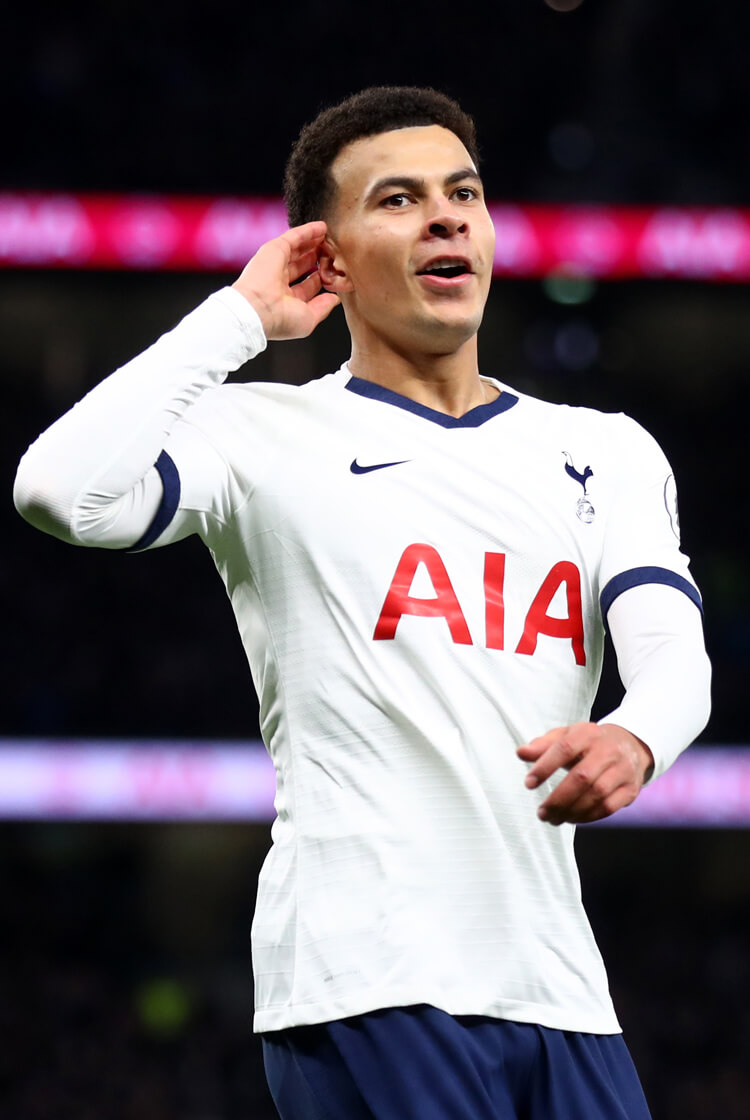 Liverpool maintained an eight-point lead at the top of the table, Manchester City dropped more points, West Ham secured an important if unlikely victory, while Crystal Palace ended a winless run. We start the first part of our Premier League review with José Mourinho and Tottenham, however.

Tottenham 3 Bournemouth 2
Dele Alli’s central threat around a fluid Harry Kane inspired Tottenham to a third consecutive victory in all competitions under José Mourinho – albeit while once again displaying some defensive deficiencies.

Serge Aurier moved high from right-back to receive in behind, with Alli and Son Heung-min offering forward runs as Kane rotated out and Moussa Sissoko acting as another penetrative runner from the right side. Bournemouth struggled with the timing of when to pass the man on during these diagonal runs; this was only intensified with the visitors’ central defenders already occupied by a central presence, thus further freeing up Tottenham’s wider runners to threaten around Alli’s central offerings.

The hosts’ left inside channel proved more effective as the game wore on, with Kane’s movements further enhancing the link with Son and Alli. The latter’s deeper movements away from the back line helped Spurs threaten with a new attacking approach, especially when Kane remained higher. This prevented any immediate pressure on Alli, who was free to receive line-breaking passes and give the visiting defence plenty to worry about. The England international scored twice and was involved in the build-up for Sissoko’s ultimately decisive third goal, with two late Harry Wilson strikes suggesting Mourinho still has some defensive work to do with his new charges.

The hosts employed a 5-4-1 defensive structure, against which Kyle Walker moved inside from right-back to form a double pivot with Ilkay Gündogan (below). The visitors’ central defence were thus provided a pass either side of lone forward Joelinton, with Benjamin Mendy and Riyad Mahrez providing attacking width.

During City’s final-third build-up, Mendy was aggressively pressed by right wing-back Javier Manquillo. This allowed Raheem Sterling to drift across to the ball, dragging Federico Fernández away from the central lane. Gabriel Jesus then pinned Ciaran Clark in the middle, leaving space between Clark and Fernández for David Silva to target with delayed and often untracked forward runs (above).

This pattern continued throughout a match that City dominated, but Newcastle were more clinical with their significantly fewer chances and secured a point that will have pleased Jurgen Klopp almost as much as it did Steve Bruce.

Liverpool 2 Brighton 1
Despite a late surge from Brighton, Liverpool claimed yet another victory to take their record to 13 wins from 14 Premier League games. The visitors initially defended in a 4-3-3 structure, screening Liverpool’s advanced central midfielders in Georginio Wijnaldum and Alex Oxlade-Chamberlain.

Jordan Henderson dropped in between Dejan Lovren and Virgil van Dijk, as the hosts built around Brighton’s first line of pressure. Roberto Firmino remained higher, helping Sadio Mané pin back both Brighton central defenders, which in turn allowed Mo Salah and Andy Robertson to attack Brighton’s full-backs one against one. Should the visitors then move a player across to create a defensive overload, Liverpool’s central players between the lines then had more space to receive back inside.

Right-back Trent Alexander-Arnold didn’t initially offer as much attacking width as Robertson, with Salah operating in front of him. But as Salah gradually took up a more permanent central attacking role, Oxlade-Chamberlain became the right-sided link with Alexander-Arnold while Firmino moved deeper. Inside combinations helped the hosts create a number of chances, but goalkeeper Mat Ryan was equal to anything on goal in the aftermath of the two van Dijk headers that saw Liverpool gain control of the game.

Brighton changed to a 4-1-4-1 defensive structure for periods of the second half, which saw Liverpool’s front three narrow to compress the visitors’ back line. Oxlade-Chamberlain then threatened most as a more defined central number 10 flanked by both full-backs, who now had more room to attack in wide areas (above). Not until a moment of madness from home goalkeeper Alisson did the hosts look vulnerable, but they held on despite Lewis Dunk’s clever late free-kick.

Chelsea 0 West Ham 1
Pressure temporarily eased on head coach Manuel Pellegrini, as his West Ham side secured an impressive 1-0 victory away at city rivals Chelsea. The hosts struggled to contain West Ham’s wider counter-attacks, with the visitors’ full-backs particularly effective at both ends of the pitch.

West Ham employed a 4-4-1-1 formation from which both Ryan Fredericks and Aaron Cresswell flew forward, especially during direct counter-attacks through the wider areas. Right-back Fredericks made narrower forward runs, while Robert Snodgrass stayed wide so as to cut back inside and deliver inswinging crosses with his left foot (below).

On the left flank, Cresswell overlapped around Pablo Fornals, who drifted inside to offer a combination with Felipe Anderson between the Chelsea lines. Fornals’ movements also stopped Chelsea’s double pivot overloading on to the dropping Anderson, whose link-up play proved key in continuing the transitional attacks. Whichever side the visitors attacked from, Chelsea’s wingers were forced deep to prevent their own full-backs becoming overloaded.

West Ham also pushed one of their central midfielders forward to help central striker Michail Antonio attack around Chelsea’s central defence, with the more conservative midfielder covering any transitional access into Mason Mount and Olivier Giroud. More often than not, it was Declan Rice who surged forward in support of Antonio, as the England international showed more attacking intent than usual.

In the end, it was fitting that the winning goal from one of their full-backs, Cresswell, cutting inside after overlapping Fornals to strike across Kepa and earn his team a surprise 1-0 victory.

Burnley 0 Crystal Palace 2
Visitors Crystal Palace secured a first Premier League victory in six matches, as they ran out 2-0 winners at Burnley. Roy Hodgson’s men managed only two efforts on target, but they scored from both as their left side proved clinical.

With Ayew dropping so deep, Wilfred Zaha and Andros Townsend moved inside to attack around the Burnley central defence (above), as Palace’s left-sided combinations continued to create the majority of their chances. The central midfield trio of James McArthur, Luka Milivojevic and Cheikhou Kouyaté offered superb cover, support and balance, with those further forward occasionally supported by an individual late runner. Even then, Palace still had two central midfielders to cover any Burnley break, as the hosts struggled to link with their in-form forwards.