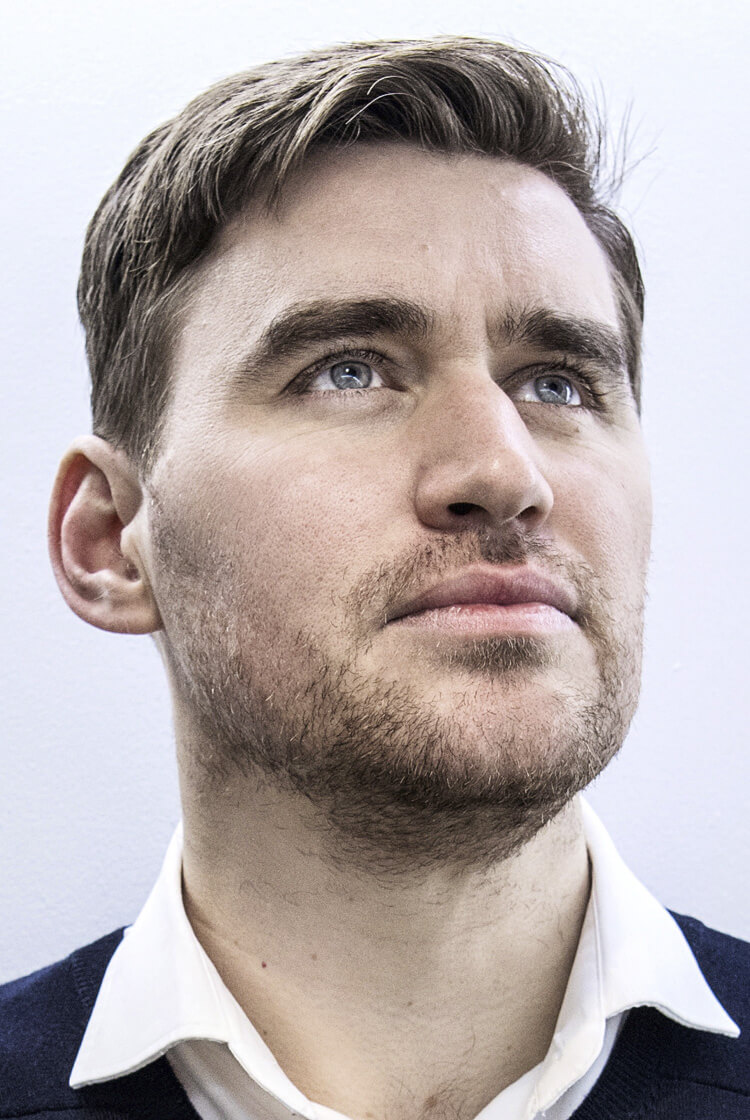 It came about through an agent.

He told me that there was a club in the Swedish Premier League. AFC Eskilstuna. They were bottom of the league, with four points after 12 matches.

My brother put it best. When the club was put to me, he pointed out that they were 16th in the Allsvenskan. That was 15 places away from Champions League qualification. To be in the same position in England, at that time, meant West Brom or Stoke.

Now, I am manager of Grimsby Town. Then, I was the Under-23s coach at Burnley. I wasn’t going to get the Stoke or West Brom jobs any time soon. So, as remorseful as I was to leave Burnley, it felt like the right time to test myself and see whether I could do something as a manager. It felt like something I had to do.

I watched a hell of a lot of football as a kid. My dad was from Leeds and had grown up watching the great Leeds teams of Don Revie. Football was in his blood and he played to a good level. When he married my mum, they moved to Sheffield.

There are two big football clubs in Sheffield, but being from North Yorkshire my dad didn’t have a preference. That was great for us as kids, because United and Wednesday played at home on alternate Saturdays and we would go to watch both. So I grew up in the 1980s watching good football at both Hillsborough and Bramall Lane. I think football is either in your blood or it’s not. Right from the start, it was a huge part of my life.

“It still burned away at me that football was my passion. It was never something that was going to go away”

Every boy dreams of being a footballer, and I was no different. I just wanted to play. But the things I wanted to do in my head, I wasn’t able to execute physically. I was tall, but a bit awkward; I didn’t really come to terms with my own body until my later teens, and by then others were quite a long way ahead of me.

I always had what I considered a good footballing brain, a good understanding of the game, but by the time I was 17 the penny had dropped that it was going to be really tough for me to compete with some of those I was playing against. I was an intelligent player, but I was slow. To play at the level I wanted to play at, I needed to be faster. The physicality of the game had overtaken me.

It’s very difficult to compare university sport to professional sport, but at my university sport was taken seriously. We bought into it, we trained incredibly hard, and we all believed what we were doing had a level of respect.

At that point, it was just about playing football, and enjoying playing, alongside the work I was doing for my degree. But it still burned away at me that football was my passion, was in my blood. It was never something that was going to go away. I just wasn’t sure, at that stage, how and where I was going to take it forward.

I loved playing, and that was ongoing, but at that time football wasn’t offering me anything in terms of a paycheck at the end of the month. I had to think about a career, about earning some money. Large financial institutions came into the university and offered us good packages. My degree was in economics. It felt like a natural fit, so I ended up going off to the city and starting work as a trader for HSBC.

“If I ever need to check myself about how bad my day is, I think about what all of those people faced on that day”

During my time there, they offered me a job in New York. A two-year secondment, initially, with a view to staying permanently. I accepted.

I was put together with a group of six traders and taken under the wing of an Italian-American guy who was very experienced and knew a hell of a lot of people on Wall Street. He really looked after me, introduced me to all of his brokers, his fund managers. It was a fantastic experience.

Around a year after I had moved to New York, the 9/11 terrorist attack happened. It was horrendous. I had spoken to a guy I knew well that morning. We lost him that day.

I’ve always prided myself on having a strong sense of perspective. But if I ever need to check myself about how bad my day is, I think of the situations that all of those people faced on that day. It’s always there.

But, gradually, things started appearing that made me think it could be possible.

I had a friend who was a tennis coach in Sheffield, and from very humble beginnings he had ended up working – and having success – with some of the top players in the world. He hadn’t played to the highest level, but he was a terrific coach. He and I were close, and I thought that if he could do that in tennis, why can’t I do it in football?

I’d watched thousands and thousands of games of football in lots of different contexts, from the highest level to some pretty low levels. I believed I had a good understanding of the game. I knew I was obsessed by it. So let’s see how far I can take it.

“I’d get up at 6am to be on the 6.30am train. I’d work through the day, then literally run at 5.01pm to get another train down to Crystal Palace’s training ground”

I knew that to have any credibility, any legitimacy, I was going to have to get qualified. So I went off and did my Level 1 coaching with the London FA – and then, through a coach I had played for at the University of Cambridge, found myself working at Crystal Palace’s academy. Young players will easily see through somebody who doesn’t know what they’re talking about, but I think they will also accept you if you feel legitimate, speak common sense and work hard on their behalf.

So that was the approach I took – for that first period of time, probably six to 12 months, it was all about observing the really excellent coaching that was going on there, and getting that little bit of insight into how they worked. It was an enlightening time.

I was hedging my bets, though, and still working in the City.

My days were interesting. I’d get up at 6am to be on the 6.30am train, sometimes the 6.45. I’d be into work for 7.15am, then work through until 5pm, literally run at 5.01pm to get another train out of London down to Beckenham, to Crystal Palace’s training ground. I’d try to be on the pitches for 6pm, to set up the session with the other coaches, then be home for 9pm and ready to do the same the following day.

It wasn’t full-time, but I was working four nights a week sometimes, and weekends. It was a tough time, because I was grafting and I was tired, but I was enjoying the fact that I was starting to work in football. Yes, it was in a fairly humble way, but the fire was already alight and this was stoking the flames.

If I kept this going, I thought, I could leave behind what I was doing and follow my passion for real.

“In the manager’s office at Burnley, it was a pinch-yourself moment. What had I done in football to earn the right to be in that room?”

Through my career, I’d managed to make some savings and get some property in London. I was by no means a rich man, but I had enough for me to make the jump and know that, if it didn’t work out, I could go back and have some time to work on what would be next.

I had that safety net, but then opportunities started to crop up for full-time positions to work with older players, more senior players, and in due course I thought this is the only way I can now go. This is my passion. Okay, I’m not earning as much money as I would be in the City, but perhaps in time I can make it work. The feedback I was receiving was that my work was good, that people could see growth in me.

So I decided to do it. To make the break. And I’ve never regretted doing so.

During my time at Burnley, I had a minor role on matchday. I used to sit at the top of the James Hargreaves Stand and give a tactical viewpoint down to Tony Loughlan, the first-team coach, on the bench. Then, at half-time, I would go into the manager's office and offer a couple of thoughts based on what I’d seen from my elevated position.

During one particular game against Tottenham towards the end of last season, I had Paul Robinson, a former England goalkeeper, on my left, and Michael Duff, who is a Burnley legend, on my right. At half-time, we all went down into the manager’s office. I’m there with Sean Dyche, Ian Woan, who had a great career as a player, Tony Loughlan, who’s had a great coaching career, and those guys I’ve just mentioned.

But, for whatever reason, they were happy to accept me. I was part of the conversation. I was in the room.

I spoke earlier about perspective. And I think it’s really important to be humble when self-assessing. As an outsider coming into football, it’s important for me to maintain that level of humility about what I’ve achieved – which is, so far, basically nothing.

Before starting in my hugely exciting new role at Grimsby, I had had 18 games as a senior head coach at Eskilstuna. After 16 of those, the club was relegated. That is a fact, and it’s on my CV.

But I think I can point to some progress in my time there, some improvement. And that for me is something, because if you asked me what it is that I work towards, that is it: improvement, progress, evolution.

I’m still absolutely obsessed by the game. Still devoted to it. Now I’m in the room, let’s see how far I can take it.