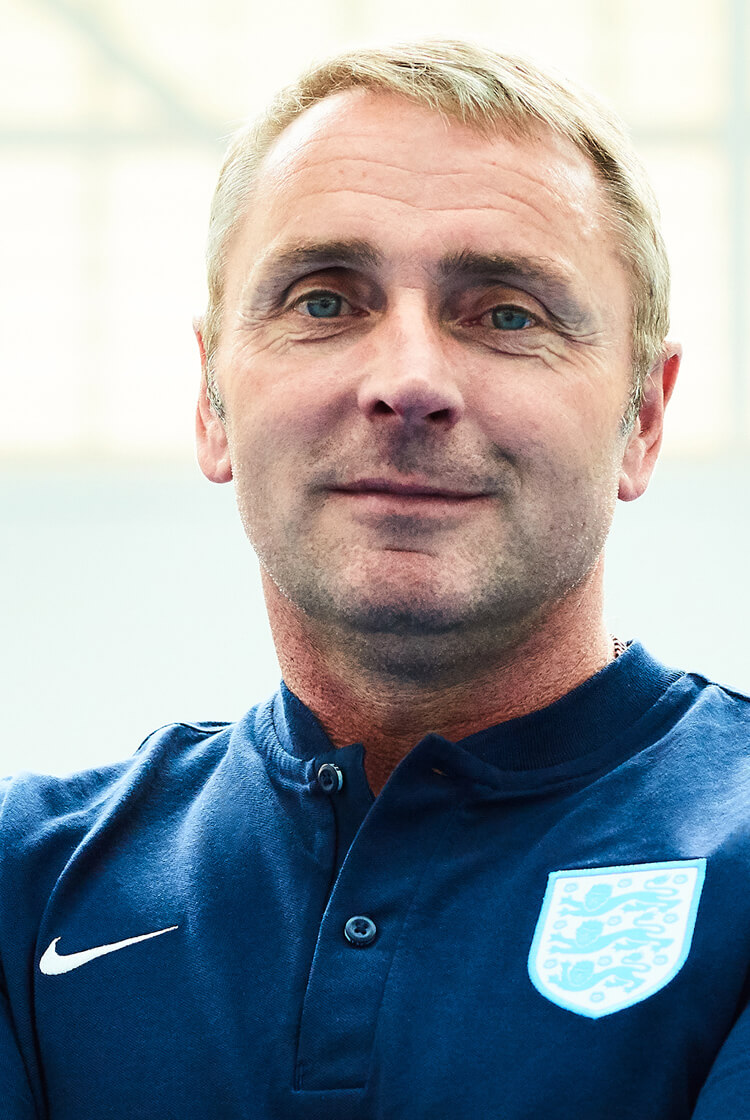 Thirty-nine days of work that started the moment my phone rang one dank February evening. On the other end of the line? Matt Crocker, the FA's head of development team coaching.

He had a question: would I take a secondment from my role as a national specialist coach to lead England through to the end of the Under-20 World Cup?

"Brilliant. When can I start?"

To work for England is a huge honour. But add to that an opportunity to go to a World Cup finals with the team, and it was something I was never going to turn down. I went to bed that night feeling like the kid who got the golden ticket in Charlie and the Chocolate Factory.

There were other challenges, too. Of the 35 names on the squad list we submitted to FIFA at the end of March, 18 had a red mark against them. These were players who we knew might not get released from clubs whose focus was understandably on securing a strong finish to their Premier League campaigns.

Between March and the first week in May, when the whole team met up at St George's Park, we had one main aim: to make sure our relationships with all the clubs were strong. We understood their needs, but we also wanted them to understand how important it was for players to come. How big a part of their development this could be.

"England hadn't won an Under-20 World Cup game for 20 years. I told the players it was time to change that"

It went better than we could have imagined. When it came to naming our final group of 21, I knew that even without the handful of quality players who weren't able to join us, we had a really talented squad. They were a good mix of people, as well. I knew they could get on together for the 35 days we'd be away.

That was a big thing. There would be times when they would need to drag each other through it. Have a go at people when it was required. Encourage them when it was needed.

The previous summer, many of them were part of the squad that lost to Italy in the semi finals of the European Under-19 Championship. I think that did them a lot of good. They felt what it was like to lose a big game, and were determined not to experience that again. You have to take a knock to come back stronger.

You also have to be strong enough to deal with it. These players were.

Look at the record: in this age group, England were on a 17-match winless streak at World Cup finals before we played our first game of the tournament. They hadn't won a match for 20 years. I told the players it was time to change that.

"There's your first challenge. Get this monkey off our backs."

They didn't disappoint. We beat Argentina 3-0 in our opening match. The team gained some real belief, and the monkey? Dead and buried.

Next: another challenge. It had been 24 years since we'd won consecutive World Cup games. With Guinea our next opponents, it was time to end another bleak record.

"Sorry fellas, but you haven't done it. We need to go again, now."

It was a tough game against Guinea, and not just because of what happened on the pitch.

The day before, Manchester had been the target of a horrific terror attack. The players knew what was going on back home, and we were aware that some might be affected by it more than others.

We decided the best way to deal with it was to be really open. Let everybody talk about it if they needed to, instead of brushing it under the carpet and saying it didn't affect us because we were in South Korea. Of course it affects us.

As a group, we stood together and held a minute's silence. It was a way of accepting: this is what's going on back home, they're all supporting us, but we are with them as well. So let's be aware of it.

A few weeks later, before the World Cup final, FIFA asked us what music we would like to go up on the podium to, if we won. The players chose Don't Look Back in Anger by Oasis - the song raising charity funds for the Manchester Appeal.

"If you're honest with players, they might not like it – but at least I know I've done my side of it. It's up to them how they deal with it"

The Guinea game itself was marked by a freak own goal. Unfortunately, not one in our favour.

We were 1-0 up when, midway through the second half, defender Fikayo Tomori tried to play a back pass to our goalkeeper, Dean Henderson, from just outside the centre circle.

Dean wasn't in his goal. He'd wandered well outside the penalty area and couldn't stop the ball from flying past him into the net. The game ended 1-1, and I had work to do.

Sometimes you just have to hold your hands up and say: "Shit happens."

I told the players there was no point blaming anybody. It's a freak goal that we will never see again. It happens in football. You've just got to be strong enough to get on with it.

I had planned to rest Tomori for our final group game against South Korea, but I couldn't do that now. He'd think I was leaving him out because of the own goal.

So he kept his place and I rested young Chelsea defender Jake Clarke-Salter instead. He was disappointed, but I explained that he hadn't done anything wrong. I just had to change my thinking to help Fik.

If you're honest with players, they might not like it – but at least I know I've done my side of it. Then it's up to them how they deal with it.

Tournament football can be brutal. In the last-16 game against Costa Rica, we had an issue with players who weren't starting. A bit of head loss. They weren't with the rest of the group.

So, after the game, we got them together on the pitch and said: "We're not going to win this with ability alone. The only way we're going to do it is with 21 players, so let's all get together."

"Everybody has this perception of English football being a bit blood and guts. They don't realise we have got good, technical footballers"

In the quarter final, we beat Mexico 1-0. When I watched the game back later that night, I spotted something: the minute we scored, every single member of the squad jumped off the bench. They were all celebrating together. That was a big moment for me.

Everyone's together. We're in it now. We've got a really good chance.

The game plan was to be patient. We knew Italy would be difficult to break down. The players watched clips of every other team getting frustrated against them, resorting to striking balls from 30 or 40 yards out.

Italy scored just two minutes into the game, but it didn't affect the players. They were clear in their minds what the plan was, and remained patient. Moving the ball side to side. Showing Italy how to play football. We ran out 3-1 winners. I thought we were outstanding.

I think our approach and style of play in South Korea was changing people's views on English football. Everybody has this perception of it being a bit blood and guts. They don't realise that we have got good, technical footballers.

Before the tournament, I had a perception of my own. I felt that FIFA didn't like us. But during the World Cup I realised they really respected the way we went about things. The fact that the players swept changing rooms before we left them. Picked up every scrap of rubbish and empty bottle from the training ground.

It's something the All Blacks talk about: "Cleaning the sheds."

There was no lack of respect from us wherever we went. I think FIFA appreciated that.

"Just think about what you are. You're world champions"

The night before the World Cup final against Venezuela, the players were really calm. Totally focused on winning. I tried to be the same. I knew how close we were to something really special, but I focused on getting everything clear in my mind for the day ahead.

It was only after the final whistle blew that the emotion of it all hit me. I might sound like a bit of an old git, but these days there's nothing I love more than watching everyone else celebrating.

I love to see what it means to them. That day, I took a little step back and took it all in. Watched the players go mental. It was a really good feeling.

All I wanted at that moment was to speak to my family.

I was on the pitch with one of my three sons, Joe. He'd flown out just for the final. My other two sons were in New York, watching the game in the early hours of the morning. My wife was at home.

In the middle of the pitch, surrounded by players going nuts, we got a three-country FaceTime conversation going between us all. It was a surreal moment.

During the tournament I'd made a habit of getting the boys together in a huddle on the pitch after every game. This day was no different, but my message to them certainly was.

"Just think about what you are. You're world champions."

There was just one more thing left to do.

For months, the players had been winding up the physio about his mullet of a haircut. He made them an unwise promise: if they won, they'd be allowed to cut off his sideburns. The boys hacked them off right there, in the middle of the huddle.

There were a few beers with family and friends at the team hotel that night, but I was shattered. I wasn't even late to bed. I just wanted to go and make sure it wasn't all a dream.

It's the same when you're a coach. During my playing career, I prided myself on the fact I played in the Premier League. Then, as a coach, I took pride in the fact that I worked at the top level as an assistant.

But to be a coach who can call himself a World Cup winner – that's something nobody can ever take away.

It's a fantastic achievement, but it's not about me. It's about being part of a group of staff and players who are World Cup winners. I'm a massive England fan. I really am. And I've had so many disappointing summers where we've not got the results that every England fan wants. So to be part of a group that has brought a World Cup home is a lovely feeling.

Four months earlier, I felt like the kid who got the golden ticket in Charlie and the Chocolate Factory.

It turned out to be exactly that.