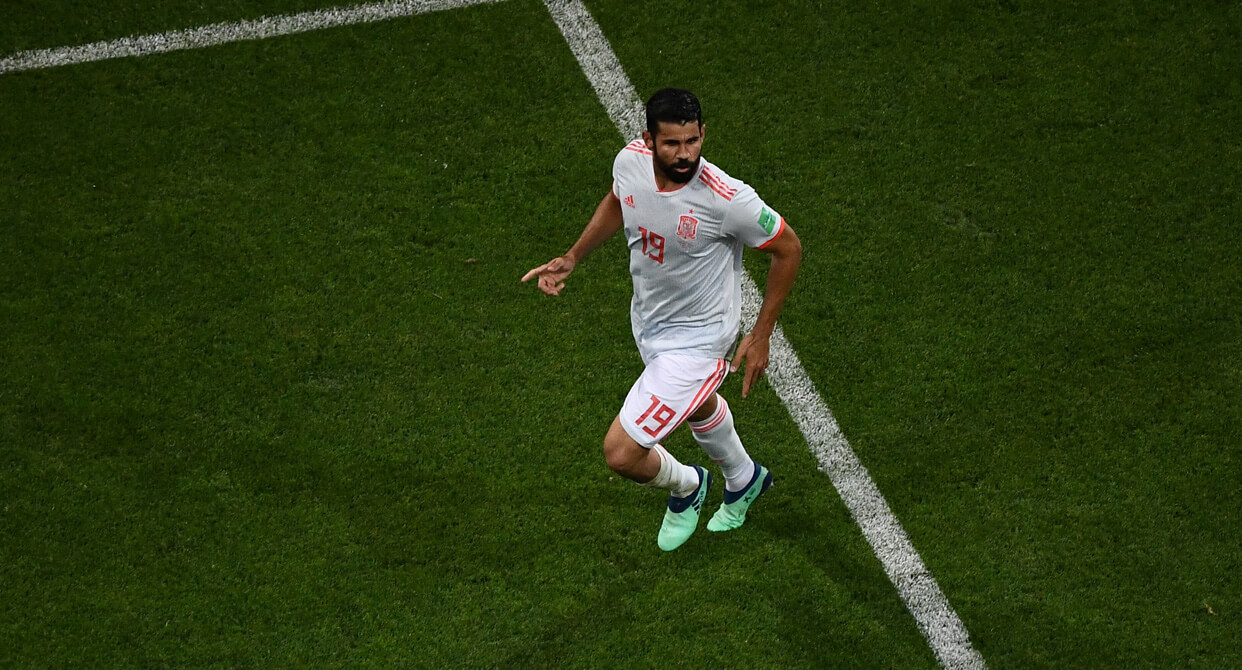 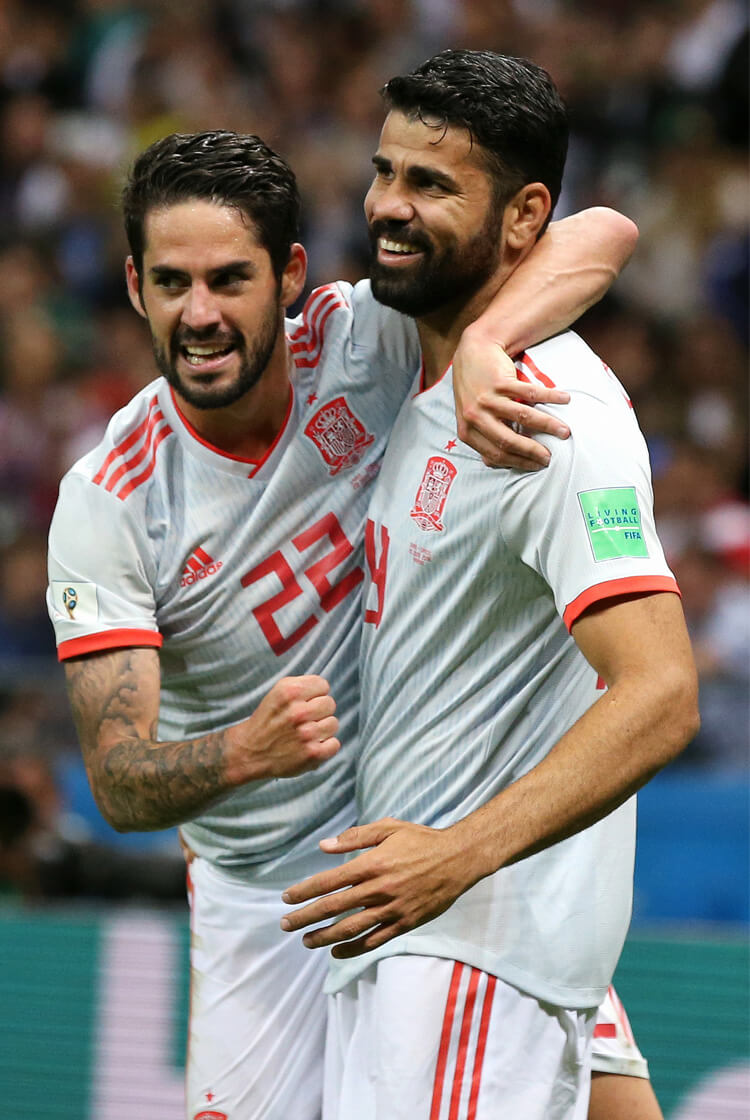 Diego Costa's fortuitous strike was the difference as Spain inflicted a first defeat of the 2018 World Cup on Iran. Fernando Hierro's team had to be patient against rigid opponents after coming into the dressing room at half-time having recorded 81 percent of possession but with little to show for their time on the ball. Luck, though, was on their side in the early stages of the second half when the ball ricocheted off Costa and into the back of the net. Iran responded with spirit and thought they had equalised before an offside call ruled out Saeid Ezatolahi's finish. Here, our team of professional coaches look back on the action in Kazan. 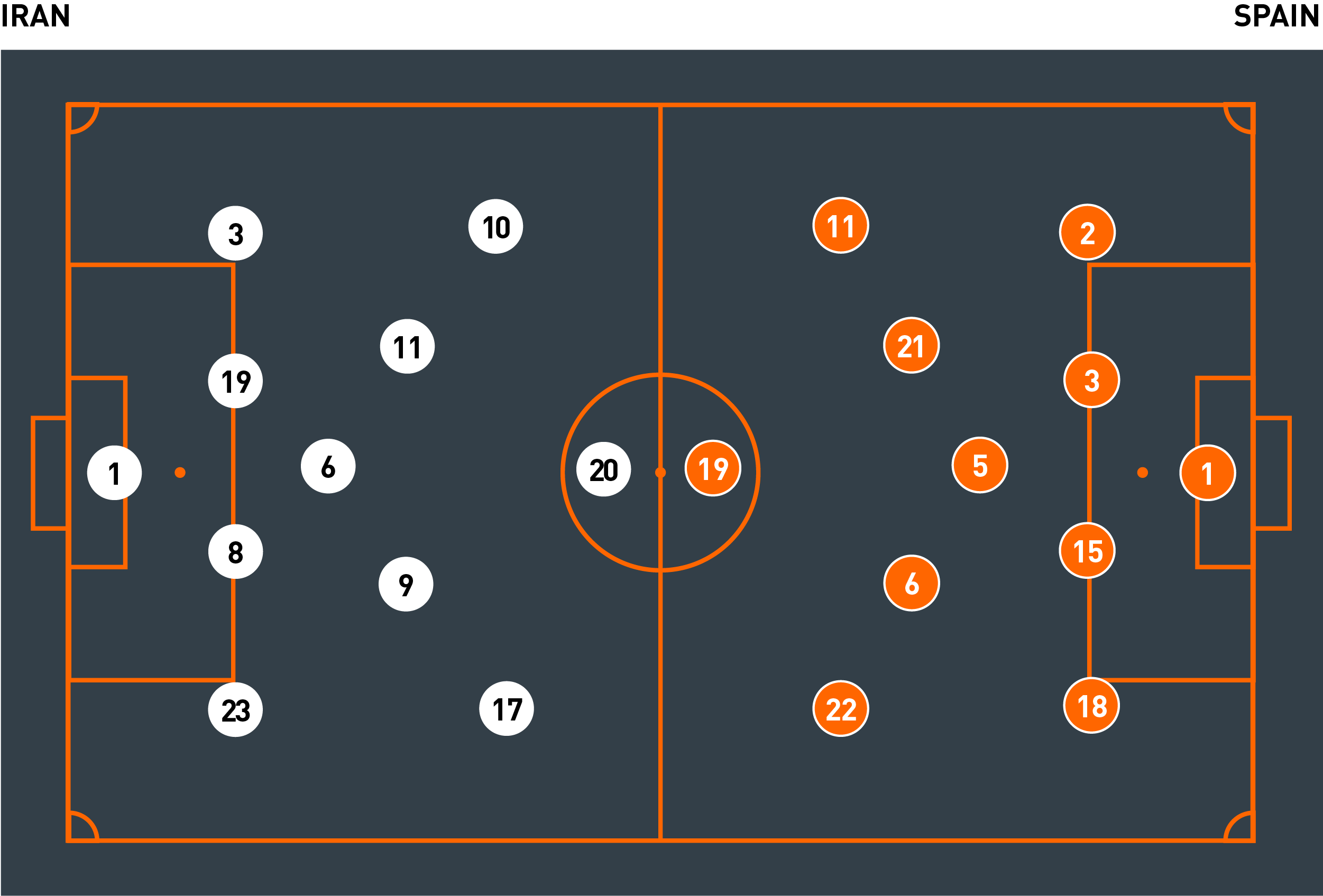 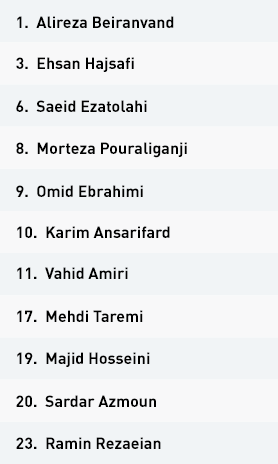 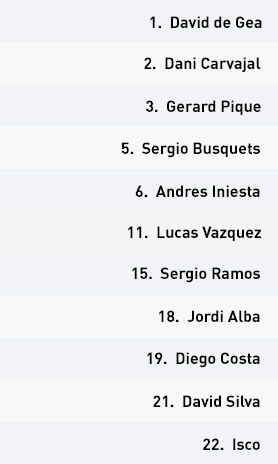 Iran set up in a 4-3-3 formation in possession. However, with only 22% of possession throughout the entire game, and factoring in that most of the possession they did have tended to be through the transition, they spent very little time in this structure.

Their only real weapons with the ball were the counter-attack and set-pieces – and they managed to create some promising opportunities through these methods, including one goal that was disallowed by VAR.

Carlos Queiroz’s side displayed much more quality out of possession. They set up in a 4-5-1 formation for the most part, with no interest in pressing Spain in their half. The line of engagement was the halfway line – and that engagement was very cautious.

They would allow Gerard Pique and Sergio Ramos to have the ball, aware that if one of their midfield lines was to press the Spain centre-backs, clever movement from Andres Iniesta or David Silva could create a passing line to bypass their midfield unit.

Instead, Iran patiently waited for the ball to played into Iniesta or Silva’s feet before pressing and making sure they couldn’t turn in possession. The objective here was not to win the ball, but to prevent forward play.

They would shuffle across and try to show play down the touchline when the ball was sent out wide to Jordi Alba or Dani Carvajal, but they were also happy for the ball to be returned to the centre-backs.

Iran experimented with a high press after conceding, but quickly realised this was a disastrous strategy, as Spain picked them apart with ease. From here, they reverted to their low block and tried to make use of the counter-attack.

Their low defensive block was a real strength. There were several occasions when they set up in a 6-3-1 formation in an attempt to deny any opportunity for Spain to penetrate their back line and force them to take shots from distance.

Spain set up in their traditional 4-3-3 formation and made one change from the team that started the draw versus Portugal with Lucas Vazquez replacing Koke. This change pushed David Silva into the right central midfield position, as Vazquez took the attacking role on the right side.

Spain had to play with great patience in possession – over the 90 minutes, they completed a total of 825 passes. Up against a highly rigid defensive structure, they had to be even more intelligent with their movement than usual.

It was clear from an early stage that Isco had been given the freedom to roam wherever he chose, making appearances both high and deep on the right, in the centre of the pitch, and in his ‘official’ position on the left. His technical quality was outstanding – even by the standards of this Spanish team. Fernando Hierro’s side were at their most threatening when he was on the ball.

Spain typically tried to make use of their full-backs as much as possible – and the bulk of their chances created were in the wide areas and half spaces. Quite often, Jordi Alba and Dani Carvajal would provide the width, with Isco and Vazquez frequently playing inside. When the wingers played on the touchline, the full-backs would make underlapping runs to try to receive the ball behind the Iran full-backs to produce a cross or cutback.

Spain’s full-backs played in the half spaces much more frequently after they took the lead and sat deeper than the wingers to combat the threat of the counter-attack from Iran. This allowed a quick transition to a defensive structure when required.

Iniesta and Silva were instrumental in dictating the tempo of the Spain attacks. They were always near to the player in possession on their side, providing security and an out-ball when the pressure eventually came. It was through the combination of these two that the ball fell to Diego Costa in the penalty box for the winning goal.

Spain organised in a 4-1-4-1 out of possession, with Sergio Busquets between the lines and Vazquez and Isco dropping in to make a flat four in midfield. They were quick to counter-press in transition but were also content to allow Iran to have the ball, knowing that their opponents were unlikely to throw too many players forward and that Pique and Ramos would deal with any direct play.