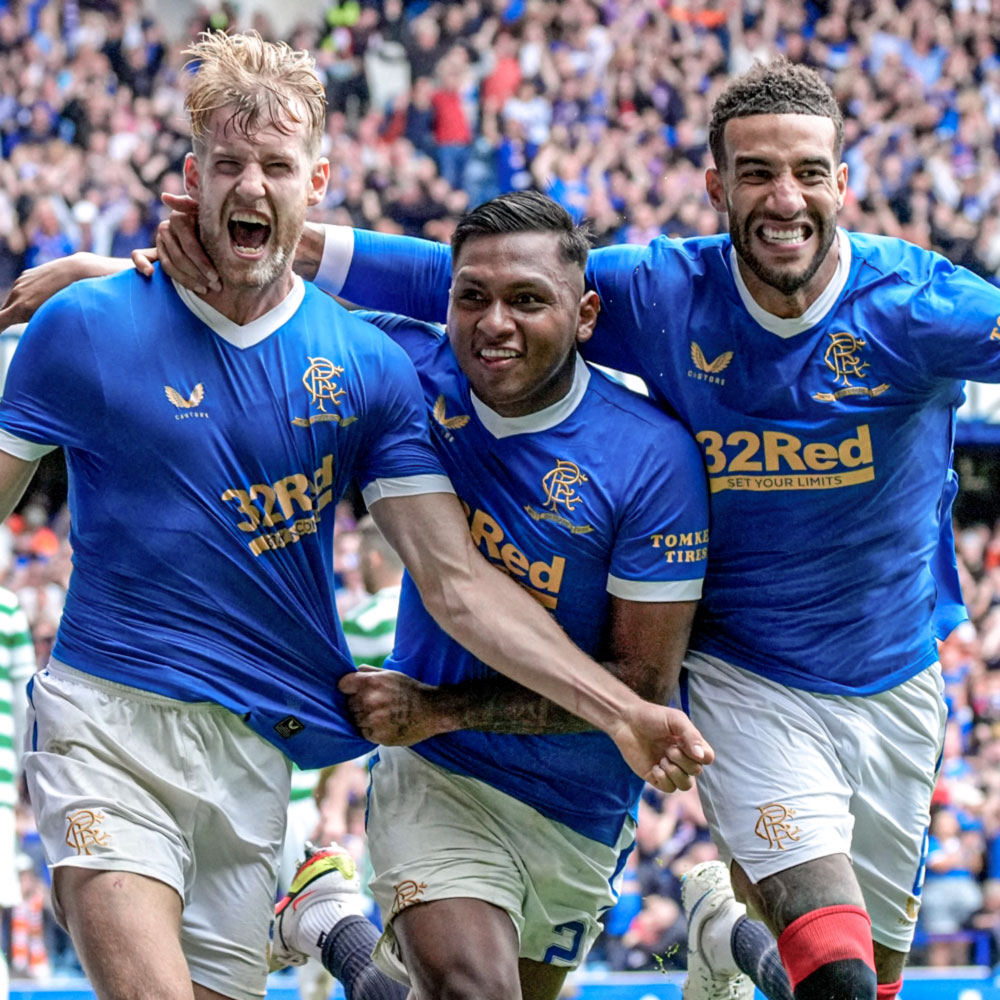 Rangers inflicted Celtic's second Scottish Premiership defeat of the new season in an enthralling first Old Firm clash of the campaign. Swedish defender Filip Helander's towering second-half header proved the matchwinner for the hosts, who were missing first-choice goalkeeper Allan McGregor, captain James Tavernier and manager Steven Gerrard – the latter absent from Ibrox because of isolation regulations. Celtic had their chances, with Odsonne Édouard skewing wide in the first half and Japanese forward Kyogo Furuhashi failing to capitalise on opportunities in the second half. "Today we showed our spirit and unity after a challenging week," Gerrard posted on Instagram after the game. "Players, staff and supporters deserve this victory." Ange Postecoglou, suffering defeat in his first Glasgow derby as Celtic head coach, was left to rue missed chances: "It was a tight game, a derby game without a lot of chances and not a lot of open spaces. The first goal was always going to be important. We didn't take our opportunity when we had it and paid the price."

In the absence of manager Steven Gerrard, Rangers were set up in a 4-3-3 formation designed to counter-attack with direct, vertical passes played quickly into a narrow front three of Ryan Kent, Kemar Roofe and Alfredo Morelos. While they attacked through the inside channels, support out wide would then be provided by the advanced central midfielders, Joe Aribo or Glen Kamara.

During more sustained possession, Borna Barišic moved forward from left-back especially well. However, the narrow front three provided the majority of the Rangers’ attacking play, progressing either from passes in behind or into feet, when they looked to hold off Celtic’s centre-backs before looking for supporting runners.

Celtic often dropped from their 4-3-3 in-possession shape to defend in a 4-4-2, with David Turnbull jumping forward from central midfield and wide attackers Liel Abada and Kyogo Furuhashi dropping back into midfield. From here, the Rangers centre-backs looked for direct passes beyond Celtic’s back line, or to build up around the visitors’ two forwards, with the number eights widening to support near Roofe and Morelos. The full-backs also looked to play direct forward passes, but these were mostly inside into the narrowing Roofe and Morelos – again, they then attempted to pin Celtic’s centre-backs, before turning or linking with the rest of the front line.

Although the hosts’ front three changed positions regularly, they did sometimes lack a dropping central player to connect with direct runs on the outside of Celtic’s centre-backs. When this was in place, Rangers penetrated into the final third much more frequently and carried a much stronger attacking threat. Kent in particular started to drop deeper, and with Roofe and Morelos holding their positions near the Celtic full-backs, this created space for midfield runners.

Barišic continued to push forward from left-back, with Leon Balogun more conservative on the right. Switches out to the left side after a regain, or through sustained possession, continued to offer Rangers a key outlet as they progressed into the final third.

Eventually, the hosts took the lead through centre-back Filip Helander’s superb header from a deep Barišic corner. The subsequent introduction of John Lundstram for Roofe on the right of the Rangers midfield led to the hosts adopting more of a mid to low block and reducing the intensity of their press. They ended the game focusing on direct counter-attacks, again targeting the inside channels, but with fewer numbers in attacking areas they preferred to hold out for an important 1-0 victory.

Head coach Ange Postecoglou set his team Celtic team up in a 4-3-3 shape in possession, with Callum McGregor operating as a single pivot in front of the back four and Kyogo Furuhashi and Liel Abada starting wide of central striker Odsonne Édouard in the front three. Kyogo was used initially from the left, from where he looked to play diagonal balls over and in behind for Édouard; David Turnbull provided additional forward runs through the left inside channel, while left-back Josip Juranovic would look to overlap if Turnbull dropped deep to help with the build.

Rangers pressed the Celtic build with a narrow front line. Ryan Kent covered McGregor, while Kemar Roofe and Alfredo Morelos covered the inside channels before pressing outwards on to the visitors’ widening centre-backs. The two Rangers number 8s were then expected to press the Celtic full-backs, although if they didn’t move up quickly enough Celtic were able to build with relative ease. Wider movements by Turnbull and Ryan Christie enabled them to receive diagonal passes and penetrate the Rangers block.

Celtic dominated possession, but any time they regained it in midfield they looked to exploit the gap between the Rangers full-backs and centre-backs. Their best chance came from an incisive forward break on that side, but Édouard scuffed his shot from Kyogo’s excellent low cross.

The visitors enjoyed particular success through the left-sided rotations of Kyogo, Turnbull and Juranovic, although one issue on that flank was that both full-back and winger favour their right foot. With both wanting to cut back on to their stronger right side, and into Rangers’ compact deep block, Celtic struggled to convert their good possession into clear chances on goal.

The visitors also lacked numbers in attack when they reached the final third, with Édouard eventually withdrawn and Kyogo pushed into a central role from where he could offer more of a direct threat.

That was in response to Rangers taking the lead, after which the hosts often dropped into a deeper 4-4-2 out of possession. Substitute John Lundstram and Joe Aribo took turns to cover the previously dangerous Celtic left, which forced the visitors to look more to their right side as the game neared its conclusion. Clever movements from substitute Tom Rogic in between the lines created opportunities to progress late on; although Kyogo received in behind twice, he failed to take advantage and Rangers’ low block held firm to impose Celtic’s second league defeat in their opening four fixtures.