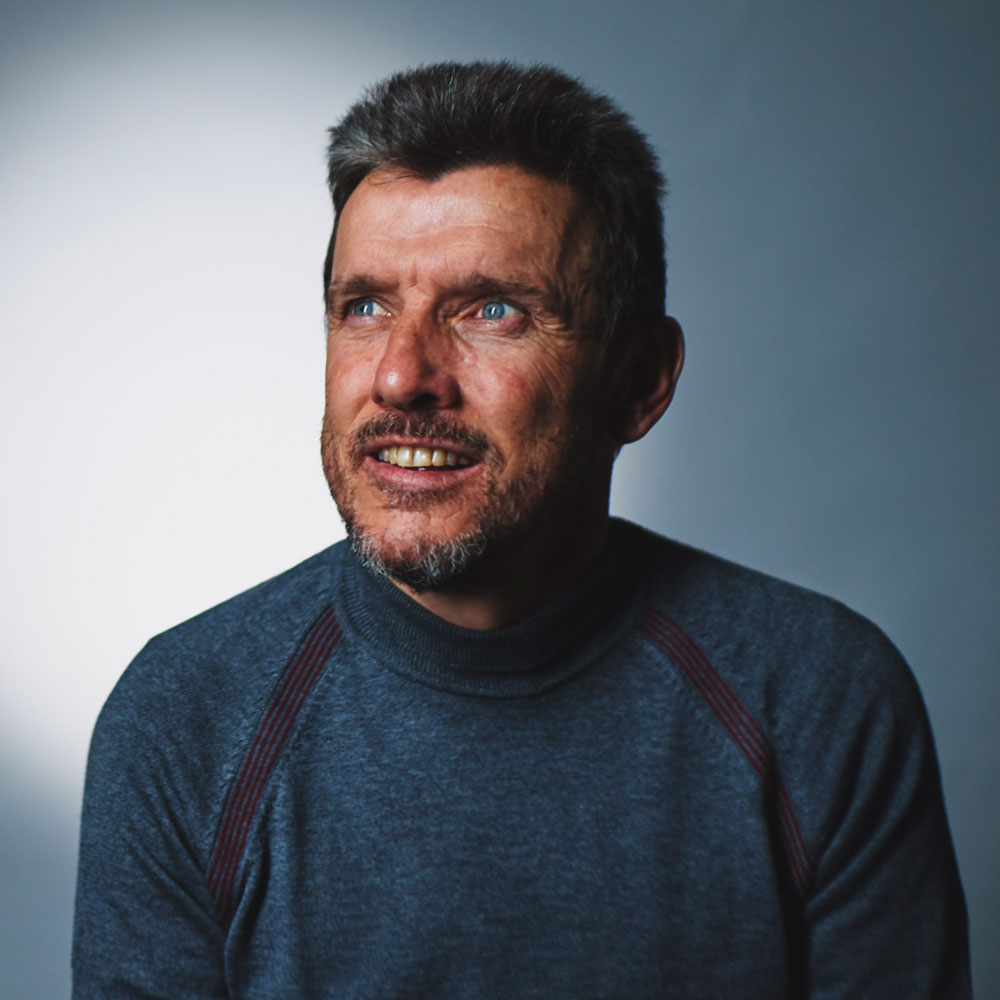 Every day, around three new members join us, and another three leave.

I had to stop working in what had been my life: football. Now I give meaning to my life in a very different way: raising awareness of Amyotrophic Lateral Sclerosis (ALS). I try to make people aware of what this disease is, what consequences it has, and the situation those of us who have it are in.

It is a new role that I am living, if possible, with even more intensity and enthusiasm than those I had before.

My first visit to the neurologist was in 2015, when I returned to Barcelona as assistant to Luis Enrique (below). Cycling was my great hobby, and I worked my body at a high intensity, but the cramps I sometimes felt on the bike started to appear at night.

When my body relaxed, my nervous system was still active. That would generate spasms. It was more a matter of discomfort, because you don’t get to rest in the same way.

Those spasms during the night lasted for about three years.

By January 2018, I was working as head coach at Celta Vigo (below). I went out on my bike one afternoon, and there was a moment when my body and my head began to ask for rest. A feeling of sluggishness, a lack of physical strength.

That’s when I started to worry, especially at the end of the season. No matter how hard I tried, I didn’t feel like I was making any progress on the bike.

In July, the doctor followed up and the first visible symptom appeared: a finger on my left hand was moving at a different speed, and lost its mobility. The doctor told me it had nothing to do with a recent fall from the bike; he pointed out that it was part of the process.

"i understood that sport, and my status as a public figure, would give me a loudspeaker"

The diagnosis was confirmed in 2019.

The process that followed was very fast. It was clear to me that I was not going to sit still and feel sorry about my situation. That was never in my plans.

I found out about the impact of ALS in Spain and decided that I had to give a different meaning to my life. It was clear that I had to work to explain but also make more visible the harsh reality faced by so many of my new teammates.

I didn’t want people to experience what happened to me on the day I was diagnosed – the feeling that ALS was unknown, almost invisible.

I understood that sport, and my status as a relatively public figure, would give me a loudspeaker. Through the media, I could achieve my objective of raising awareness and making this disease more visible.

Having made my decision, I told my wife and explained my reasons. As she has always done throughout my sporting career, she joined in and accompanied me. She was more determined than ever.

The only thing left to decide was how to make my illness known; how to express my commitment to making it visible.

I decided to do it in Barcelona: the city where I had lived, and the club that had been part of my footballing life for 13 years.

I think it’s a way of making Barcelona’s motto – Més que un club! (More than a club, below) – come true with deeds.

Along the way, though, it is not only Barcelona that has supported me. I am very happy with the support of the teams where I played and worked as a coach: Osasuna, Sevilla, Tenerife, Oviedo, Numancia, Racing Santander, Celta Vigo and Girona.

I lived exciting moments with them all, and now they are helping me make people aware of this disease. So have many of the opponents I played against, especially after I made my condition public.

It means that football is more than just training and playing matches. There is respect for people, and that is a good message.

I am also grateful to the media for giving my goal continuity beyond just the impact of the news.

In my new team, I have met many people and asked them to tell me about their experiences, their problems and their most pressing needs.

Unfortunately, there are many. The most important is that more public resources are invested into ALS research, and that a cure is found. That is the solution.

I also want to raise awareness of the financial difficulties many of my teammates go through. Fortunately, my sporting career has allowed me a comfortable financial situation to help me cope with this disease. Not many have that.

I try to raise funds through talks, sporting events and different proposals that come my way. I usually then donate these funds to the association or foundation responsible for the care of those affected in the community where the event is held.

In a way, I feel that my time as a coach is helping me through this experience.

As a goalkeeping coach, I was lucky enough to work with Frank Rijkaard and Pep Guardiola – and then, as an assistant coach, with Luis Enrique. In each case, I experienced a brilliant dressing room with fantastic lads.

But they were also very ambitious.

"we have to achieve the goal of making als more visible. there is no time to give up on this disease"

The biggest problem we had with our group of players was that, working with them day to day, they were so ambitious. They wanted to win every single task we put to them in training.

But, for society, that ambition is gold. A message for everyone.

As a coach, there are times when you have to be able to trust your players – and transmit that trust to them. There are other times when those players need you to push them.

That’s what I try to convey to my current teammates. We have to show the confidence that we will achieve the goal of making ALS visible and making a difference. To do that, though, we have to push very hard. There is no time to give up on this disease.

From the beginning, I think there has been one key word for me: acceptance. An acceptance that there are things I can’t control or change, like my ALS diagnosis. It is part of my life, along with other complicated and many more successful moments in my life.

"despite the difficulties, life is always worth living. there are so many ways to enjoy it"

Life can be enjoyed in many ways, and it is always worthwhile to do so – even in spite of the limitations that ALS imposes upon me. I never thought I would feel happy in a wheelchair, but I have accepted my situation.

That way of looking at things helps me to get through the bad times, because all ALS sufferers fall at some point. But you have to get back up; if you don’t, you will be overwhelmed.

My experiences in professional football helped me to grow up much faster, and to pick myself up from falls.

I don’t want to generate sadness, but to convey the idea that, despite the difficulties, life is always worth living. There are so many ways to enjoy it. This team has one great goal to achieve. Do not doubt for one second that we will fight for it until the end.

Juan Carlos Unzué works with the Luzón Foundation and other institutions to raise awareness of ALS, the most common form of motor neurone disease. Survival after diagnosis exceeds five years in only 10 per cent of cases