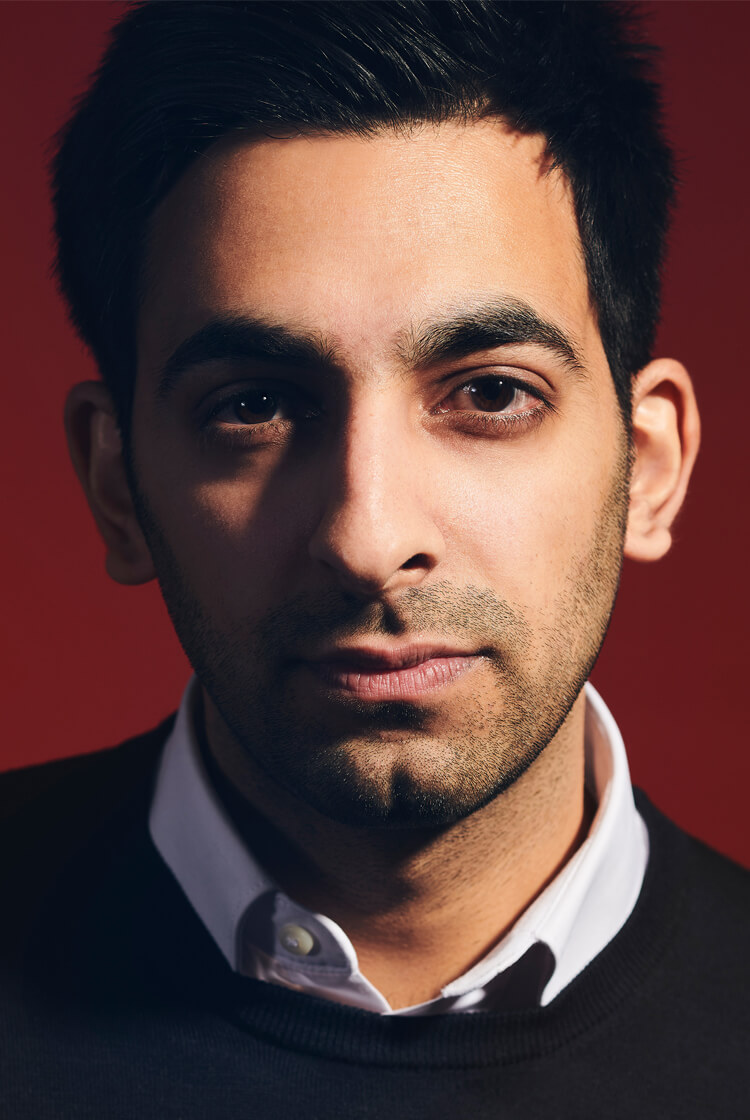 I was 18 when I fell out of love with football.

I’d been doing well at Nottingham Forest. I was training with the reserves and probably ahead of most of the boys in my age group. I could see the next step ahead of me.

It all changed in an instant.

I was playing in an academy match at Leeds United and went in for a challenge that was maybe a 60-40 in the other player’s favour. I won the ball, but there was contact just above my ankle.

A double leg fracture – tibia and fibula both snapped.

I don’t remember the pain, just that within minutes I was put on morphine, gas and air.

The first two months of rehab were okay. The two or three after that weren’t too bad, either. I was getting moving again and there were a few lads with injuries, so we had a good group working together.

But, one by one, the others got back into training. Soon it was just me and the physio working together, day in, day out.

Mentally, I wasn’t in a good place. But you can’t show any weakness. I couldn’t go to a coach and say: “I feel like I don’t want to be here. I feel worthless.” I couldn’t say it to my physio, either – what if he reported it back to the coaching staff?

My family had never been involved in elite sport, so even they didn’t really understand what I was going through.

"I had a few trials in Scotland, but I was quite a technical player and not big, physically. It was a bit of a culture shock"

Now I’m a head coach, those difficult times give me a useful insight into how to deal with injured players. I know how empathetic I need to be. How difficult and dark those times can get for anyone.

By the time I got back on the pitch at Forest, a lot had changed. The first team had a new manager who had got rid of the Under-23 set-up.

There was nowhere for me to go. I was too old for the academy. Not developed enough for the first team.

After I was released I had a few trials in Scotland, but I struggled. I was quite a technical player and not big, physically. So up there, it was a bit of a culture shock.

I ended up at the University of Stirling, where Michael Jolley – who I knew from my Forest days – was the head coach. He’d started a scholarship programme to get players like me back into football.

It was there that I really developed my interest in coaching.

By then, I knew that I wasn’t going to make it as a player, but I wanted to stay involved in the game. I’d always taken an interest in what my coaches were doing and why they were doing it. So I thought right, I’m going to get my badges done and start getting as much experience as I can.

While I was studying, I kept a close link with Forest and worked a lot with their younger boys’ age groups. I also got involved with Inspire Sport, who manage tours for school football teams and academy sides. They take them to clubs like Real Madrid, where they get coached by the academy coaches and play at the training ground.

I used it as a way to find out how coaches in other countries worked. It took me to Valencia, Porto, Ajax, Feyenoord and Villarreal, where I would do nothing other than speak to the coaches and watch them work. As I built those relationships, they started to let me get involved with some coaching as well.

At first, it was seeing kids get engaged with football that I really enjoyed. As I started working with older age groups, it became about trying to get people to do things that I never could.

Now, what I love is the feeling of winning and making a real difference to people. I still have that hunger to make players better, but at the moment I’m always thinking about what I can do to help the team, the players and the club win.

Even when I’m at my day job.

Getting into HR after I graduated wasn’t part of my plan: I wanted to be a coach. I had my B Licence but there weren’t many opportunities, so I thought I’d see what the graduate market was like.

I had a job interview with a company called Digby Morgan in London, during which the chief executive asked me loads of questions about my sporting background. After I got the job I asked him why he’d focused on it so much.

“Simple,” he said. “Some of those skills and behaviours you’ve displayed are exactly what I want you to bring to this company.”

So he took a punt on me, and I found myself moving to London. To be honest, I was a bit starstruck by it at first, but I’ve been there ever since.

These days I juggle my role at Charlton with working for Deloitte in talent development – making sure individuals are performing and developing to the best of their ability. It actually works really well alongside my coaching.

I'm also founder of The-Transition-Phase, an initiative that supports young elite-level athletes with career transition and opportunities away from sport.

All those roles are about managing people. Learning how to deal with different individuals.

A lot of things I do at work, I take into my team – like personality profiling. That applies to myself, too.

For example, one of my personality traits is that I like to reflect before making decisions. Sometimes you can’t do that in coaching. Since I started, I’ve learnt to be more decisive – but I can still be better at that.

I’ve always been empathetic with players, too. That means making sure that the sessions I put on for them are ones they’re going to enjoy and learn from; that I’m not asking them anything I wouldn’t expect from myself.

"If I’d gone straight into dealing with the first team with no experience of coaching females, I would have struggled"

When Digby Morgan first brought me to London, I knew I still wanted to stay in coaching. So, I emailed or rang up all the clubs that were in an area I could commute to.

It was 2014 when Charlton gave me the opportunity to watch a few of their academy sessions. That led to me getting involved with the boys team. But when I saw a vacancy come up to work with their women’s team (with the Under-16s), I thought, why not?

It was a real eye-opener.

I’d never worked with girls before, so it’s fortunate that I started with the Under-16s. If I’d gone straight into dealing with the first team with no experience of coaching females, I would have struggled.

There are differences compared to working with males. It’s not better or worse, just different.

In general, girls haven’t come through the same pathway as boys in football. Most boys for example, will go through extensive academy pathways, where they are exposed to lots of tactical and technical training. They become used to analysing their own performances and feeding back to the coaches. Not many young girls get the opportunity to do that.

So, when we use video analysis with the first team now at Charlton, or go into tactical detail, we have to be conscious of how we give them feedback.

One coach I’ve spoken to in the women’s game said that before he goes into team meetings where he knows a player is going to get highlighted on the video analysis, he has a chat to that player individually. They take value from that. They understand that you’re not doing it to pick on them in front of their peers, but for the benefit of the team.

I’ve heard a lot of people say that football is football. Whether you’re coaching men, women, girls or boys, it’s all the same. That’s true to an extent, but it’s about the way you deal with people. You have to be conscious and understanding of who they are as a person, and how to get the best from them.

Ultimately, it’s the same sport, but the way you deal with people has to be slightly different.

"People have unconscious stereotypes of a female coach and a BAME coach. You automatically feel under pressure to prove your worth"

I spent six months working with the Under-16s before the club gave me a role with the development team. It was the perfect stage for me. I was working with 16 to 19-year olds who perhaps hadn’t had much good-quality coaching growing up, so their tactical knowledge was probably similar to that of boys a few years below.

I brought a lot of traits to the role that I’d learned from my time at Forest, where I was used to value-based coaching with a real emphasis on the tactical side. It was something I don’t think they did much of with the women’s side at Charlton at that time, and it seemed to catch the eye of the chairman and first-team manager.

The following season I was dragged up to work with the first team, competing in the Women’s Premier League. First, as a coach. Then, as managers came and went, I was given the opportunity to step up.

It has been a whirlwind journey. One that forced me to develop quickly as a coach. Especially in terms of my beliefs and self-confidence.

When you’re working with academies you can sometimes get away with it, but working with elite-level players who are focused on winning means that as a coach you have to be confident in what you’re delivering.

Someone told me recently that I’m in the highest position of any Asian coach in the UK. I had no idea that was the case. And I do now start to sense a bit of a responsibility, because the more visible people are, the more it breaks down stereotypes. But I can do more to help.

I see the mix of players at the top level of the women’s game in this country, and it’s not diverse. People within the game are trying to help, but it’s a really difficult area – we’re trying to change a culture.

I have been fortunate that the clubs I've worked for have not put up barriers based on my background or ethnicity. I know that’s not the case for everyone, though. So, I want to connect to parents and say, your child is missing out if they don’t get involved in sport.

Whether you make it as a professional or not, sport can help you as a person, no matter what your background. It has given me values and behaviours that have helped me to be successful in life away from sport, and it can do the same for young females from minority backgrounds.

I believe football is changing. But I do sometimes feel that, when it comes to coaching, I have to prove myself to people more than others might.

I’m out there to prove a point to people.

Maybe I could have done it as a player, too – I’ll never really know. But as a manager I can see that next step ahead of me again. This time, I believe I can take it.