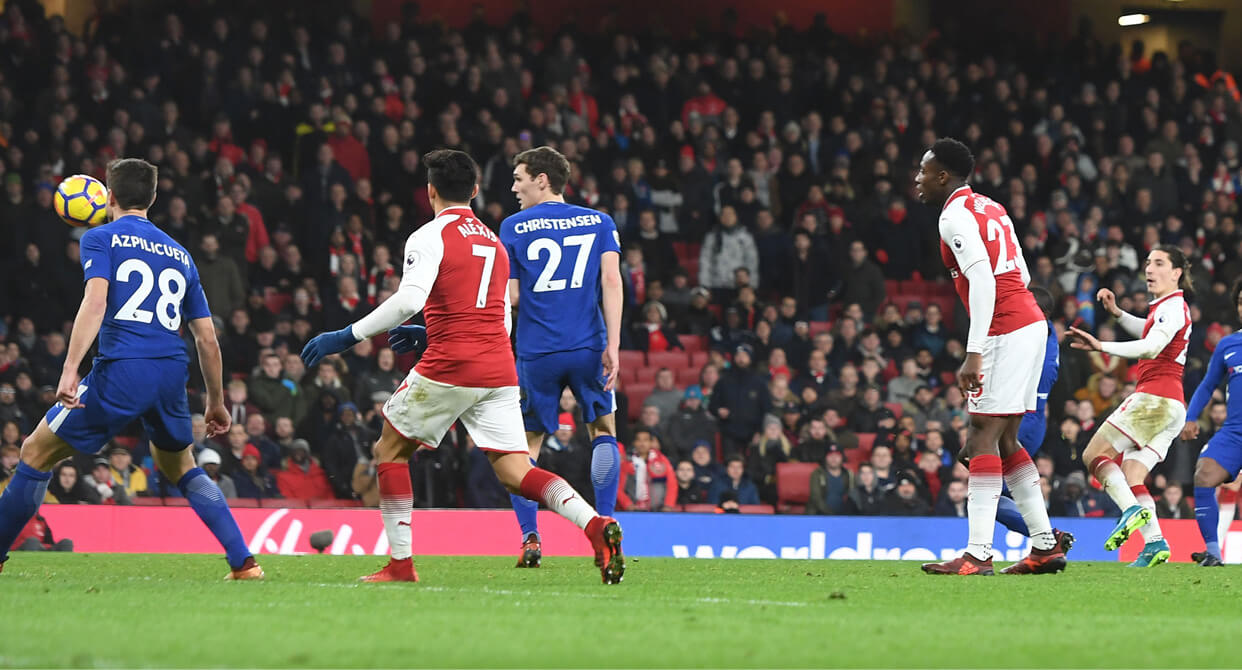 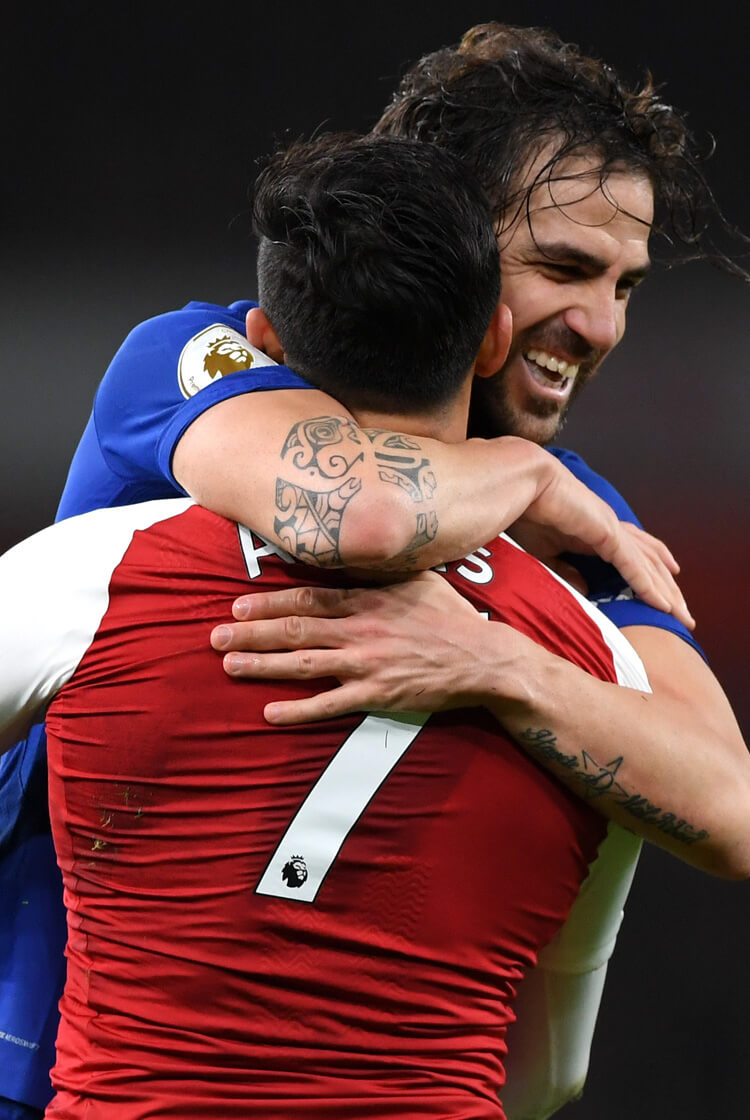 An enthralling and high-quality London derby exploded into life in the second half, with controversy and late drama thrown into the mix for good measure. Arsenal went ahead through the resurgent Jack Wilshere before Eden Hazard won and duly dispatched a heavily disputed penalty after a challenge by Hector Bellerin. When Marcos Alonso popped up late to show the off-form Alvaro Morata how to finish, it looked like Chelsea would return west with all three points – but Bellerin had his say with a superb half-volley in stoppage time. 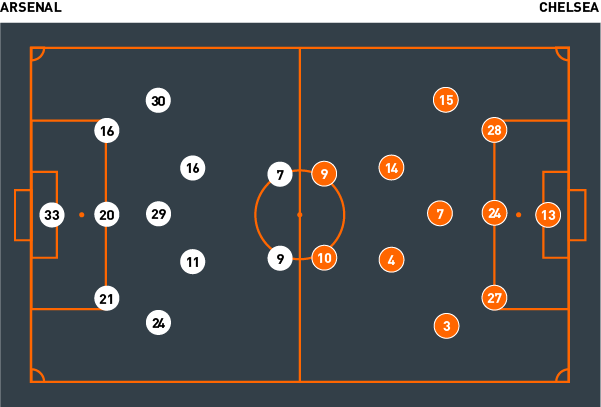 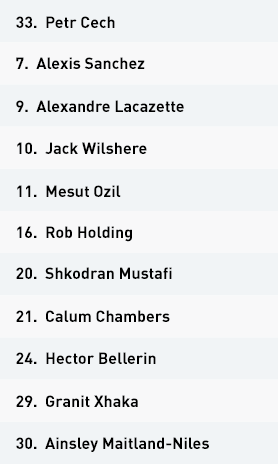 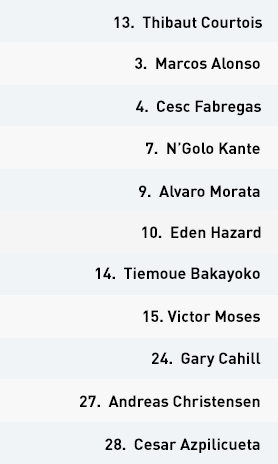 The home side lined up in a 3-5-2 formation, dropping back to 5-3-2 in defence, with Hector Bellerin and Ainsley Maitland-Niles operating as wing-backs. The forward duo of Alexis Sanchez and Alexandre Lacazette made life difficult for Chelsea, forcing Antonio Conte’s side to play directly into Alvaro Morata, who had little joy in the air against the Gunners’ three centre-backs. The midfield trio of Granit Xhaka, Jack Wilshere and Mesut Ozil also worked hard to pressurise the player in possession, making it very difficult for Chelsea to play through them.

In the defensive third, however, Arsenal committed serious errors. The centre-backs too often abandoned their defensive line to go and press towards midfield, without worrying whether they were leaving space in behind or whether a teammate was available to cover. Calum Chambers in particular made several defensive mistakes, in terms of both marking and decision-making.

They were also slow to reorganise in their defensive transition, leaving significant gaps between the lines, even with a number of players behind the ball. The Chelsea forwards took repeated advantage of the space in behind the defensive line.

In attack, Arsenal wanted to build from the back and had few problems getting past the first defensive line of Morata and Eden Hazard. Their midfielders tried to play in the opposition half, and were supported by the dynamism of their teammates all over the park. Along with the quality of their attackers, this ensured they could trouble their opponents by playing the ball into dangerous positions.

Wenger’s team posed significant danger in the final third, always looking to get players into shooting positions and causing consistent damage with breakaway runs through the last line of defence. They offered a real threat on the counter-attack, particularly in the second half with the scores level and Chelsea coming forward. This allowed them to exploit gaps in the defence, giving their quick forwards space to attack – they had two excellent chances to take the lead before Wilshere eventually grabbed the opener.

Antonio Conte also set up in a 3-5-2 formation, switching to 5-3-2 in defence. Cesar Azpilicueta, Andreas Christensen and Gary Cahill were the starting centre-backs from right to left, with Victor Moses and Marcos Alonso at wing-back. Cesc Fabregas and Tiemoue Bakayoko started either side of N’Golo Kante in midfield, with Alvaro Morata and Eden Hazard up top.

The Chelsea midfield looked to pressed the player in possession. Kante led the way, always trying to close down potential gaps in front of a typically well-organised back three who were happy to drop deep. They dealt well with crosses, although the only time they truly lost control here was the late equaliser, which resulted from a second ball in the second minute of stoppage time.

Chelsea’s instinct in attack was to build from the back through combination play, but strong pressing from Arsene Wenger’s side forced them to play directly into Morata, who lost his individual battles against the centre-backs. The Blues tried to pass the ball through midfield, but their aim was to reach the edge of the opposition penalty area as quickly as possible so that their best attackers could threaten. Kante, Fabregas, Bakayoko and later Willian were generally patient, looking to the side if there wasn’t an option further forward.

The width and the attacking intent of their wing-backs stood out as usual, the runs of Moses, Davide Zappacosta and Marcos Alonso down the flanks of vital importance in generating crosses – a clear example being Alonso’s goal from a Zappacosta cross in the 84th minute. In the final third, they managed to exploit the weakness in the Arsenal back three to find a path through them. Unfortunately, an off-form Alvaro Morata wasn’t able to take advantage of the excellent opportunities that came his way.

Chelsea posed the greatest threat on the counter-attack, playing direct passes into their forwards or looking for immediate support from a nearby teammate so that they could pass into space every time they won the ball back. Morata’s chances on 70 and 76 minutes were clear examples of this.

Petr Cech and Thibaut Courtois were both to the fore. Both goalkeepers made decisive saves to ensure their sides avoided defeat.

The defensive vulnerability of Arsenal, due to serious errors from their back three.

Excellent performances from both Jack Wilshere and Mesut Ozil in the Arsenal midfield, who were able to take control in the middle of the park and drive Chelsea back.

A disappointing performance from Alvaro Morata, whose poor finishing led to him squandering a number of clear chances.