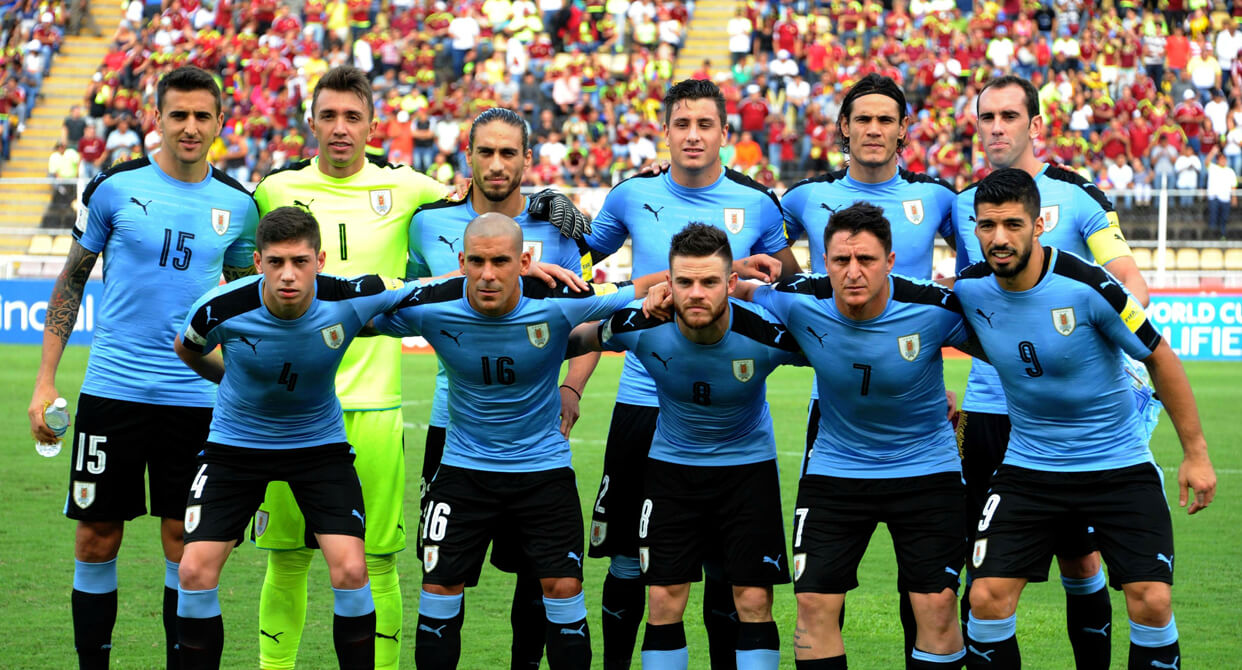 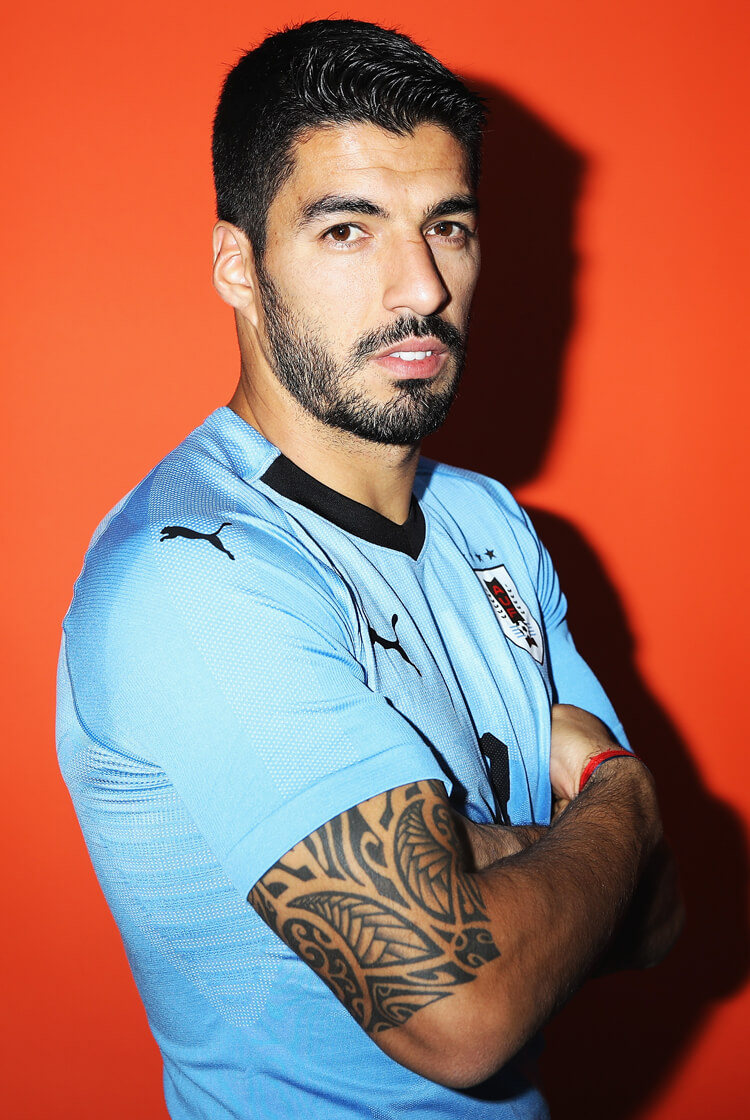 Qualifying route
Having only reached the last 16 in Brazil, two-time winners Uruguay will be hoping for a better run in Russia – particularly as many star players may be at their last World Cup finals.

Uruguay finished as runners-up in the South American qualifiers, 10 points behind Brazil. The 32 goals they scored across the campaign was second only to the group winners, with Edinson Cavani top-scoring with 10. The 20 they conceded, however, made theirs the leakiest defence of the four South American sides who qualified automatically from the pool.

Uruguay 1 Brazil 4
Having earned a point from a 2-2 draw in Recife a year earlier, a Uruguay team missing Luis Suarez found themselves on the end of a thrashing by a resurgent Brazil in the reverse fixture. The home side actually led through Edinson Cavani, who stepped up to score the penalty he himself had won, but after that it was largely one-way traffic.

Paulinho (above) unleashed a rocket into the top corner from distance to equalise, and then grabbed two more close-range efforts to complete a rare hat-trick in the second half. Those strikes came either side of a glorious Neymar lob over the stranded Martin Silva, as a supposedly experienced Uruguay defence failed to deal with a routine long ball and found themselves with some searching questions to answer.

Uruguay 4 Bolivia 2
It went to the final day, but Uruguay confirmed their place in Russia with a 4-2 victory at home to strugglers Bolivia. Despite their place being all but secured heading into the clash in Montevideo, head coach Oscar Tabarez named a strong line-up in a bid to avoid any late drama.

Bolivia took the lead in comical fashion, as defender Gaston Silva fired the ball into his own net via a ridiculous deflection. Goals from veteran defender Martin Caceres and Edinson Cavani saw Uruguay into a half-time lead, before Luis Suarez (below) took over in the second half – the Barcelona forward scored twice to make the game safe before defender Diego Godin gifted Bolivia a late consolation with Uruguay’s second own goal of the game.

Diego Godin
Centre-back, 32, Atletico Madrid
A natural leader operating at the heart of the defence for both Atletico Madrid and Uruguay, Godin is a rugged but intelligent central defender who has won more than 100 caps for his country.

Godin (below, left) began his footballing journey with Cerro, before being transferred to the much more prominent Nacional. European scouts had been alerted, however, and at 21 he secured a move to La Liga with Villareal. Three seasons later came his move to Atletico, where he has been a central figure in Diego Simeone’s rock-solid defensive philosophy. Twice a Europa League winner and twice a beaten Champions League finalist, he was also in the Atletico team that won La Liga in 2014.

A Copa America winner with Uruguay in 2011, Godin is a superb reader of the game who never shies from putting his body on the line. He is the chief organiser in the back line and, not surprisingly, the team’s captain.

Edinson Cavani
Forward, 31, PSG
Along with forward Luis Suarez, Cavani (above, right) forms a mouthwatering striking partnership for Uruguay. Having scored 40 goals in 50 games for club and country this season, he is also a man in form.

After two seasons with Danubio in his native Uruguay, Cavani moved to Italy for a successful six years split equally between Palermo and later Napoli. His performances in the 2012/13 season, when with 29 goals he became Serie A top scorer for the first time, alerted PSG. In five subsequent seasons in Paris, the 31-year-old has won four league titles and four French cups, netting 116 league goals along the way.

While not quite as prolific as Suarez for his country, Cavani’s 42 goals in 101 appearances for Uruguay means he lies second on the all-time list. A powerful forward who can operate as a lone target man, he also has a poacher’s eye for goal and is a genuinely world-class finisher. If he and Suarez can dovetail effectively, which hasn’t always been the case, Uruguay have a real chance of going deep in Russia.

Luis Suarez
Forward, 31, Barcelona
Uruguay’s talismanic striker is heading for his third and possibly final World Cup in the hope of making footballing headlines. In 2010, he played panto villain against Ghana, handling on the line to stop the goal that would have seen the African team into an historic semi final – and then celebrating wildly as his team eventually progressed on penalties. Four years later in Brazil, he went even better (or worse) when biting Italian defender Giorgio Chiellini in a feisty group-stage encounter.

Suarez began his career in Uruguay with Nacional, before a move to the Netherlands – first with Groningen and then Ajax – followed. His strike rate at the latter, 81 goals in 110 league games, alerted Liverpool – who shelled out a club record £22.8m (at least until they signed Andy Carroll a few hours later) to bring him to Anfield for what turned into a spell as sensational as it was controversial. The lure of Barcelona eventually proved too great to resist; in four years at the Nou Camp, Suarez has won three league titles and one Champions League.

Suarez is a cunning, clever, agile forward with a tireless work ethic that sets an example for his teammates at both club and international level. While the same can’t always be said of his behaviour, he is also a world-class finisher capable of turning half-chances into goals against any opponent. He may now be 31, but it is still impossible for fan and opponent alike to take their eyes off him for a second.

Oscar Tabarez, 71
The veteran coach is in his second spell as Uruguay head coach. He led Uruguay to the round of 16 at Italia ’90, as they were eventually knocked out by the hosts. Taking over for a second time 16 years later, he led La Celeste to fourth place at the 2010 World Cup and then to the final of the 2011 Copa America in Argentina. The 3-0 win over Paraguay, goals coming from Luis Suarez and a brace from Diego Forlan, earned Uruguay a 15th South American championship.

The veteran coach is unlikely to set his team up in an overly offensive way, even in a group that looks winnable. He will aim to make it as difficult as possible for teams to attack, particularly in central areas, but nor will he ask his full-backs to press too high up the pitch. Uruguay have technicians across the pitch – young Juventus midfielder Rodrigo Bentancur being one to look out for – and can play through the thirds, but Tabarez will still look to play a vertical style that aims to quickly and efficiently work the ball into their potentially explosive front line. If the prolific strikers Suarez and Edinson Cavani are on form, this is a very difficult team to keep out.

Defence
Despite keeping eight clean sheets – six in their opening nine games – in qualifying, the Uruguay defence progressively weakened. In the 10 qualifying games in which they conceded, they let in more than one seven times. If the lines are breached once, Fernando Muslera (above, right) and his defence is likely to concede again.

In particular, they have a habit of leaving spaces in between their central midfielders and their wide players. If an opponent set up with a number 10, little movements to either side could open up the Uruguay back line (above, left). They are also weak when dealing with second balls. They will win their fair share of defensive headers, but if they fail to clear their lines at the first attempt, don’t be surprised if teams begin to create chances from a loose second ball.

Although they have tightened up in recent friendly matches – four clean sheets in five – Uruguay’s defence will have to be on point if they want to go far in Russia.

Alongside Vecino, Tabarez could employ Rodrigo Bentancur in either a defensive or attacking midfield role. The 20-year-old is a star in the making and looks ready to operate effectively for his country at this level. Alongside one of the squad’s more experienced midfielders – Carlos Sanchez or Christian Rodriguez, for example – this pair look capable of exerting control in a congested midfield area.

Attack
The final and most exciting piece to Uruguay’s jigsaw is the partnership between Edinson Cavani and Luis Suarez. Within the pairing, Suarez has a wider range of movements, and will look to irritate defenders throughout the opposing back line. Cavani, by contrast, will remain central, often within the width of the penalty area. Both offer excellent link-up play, though, and will ebb and flow around one another depending on each game is going. At their best, they form arguably the best strike partnership in international football.