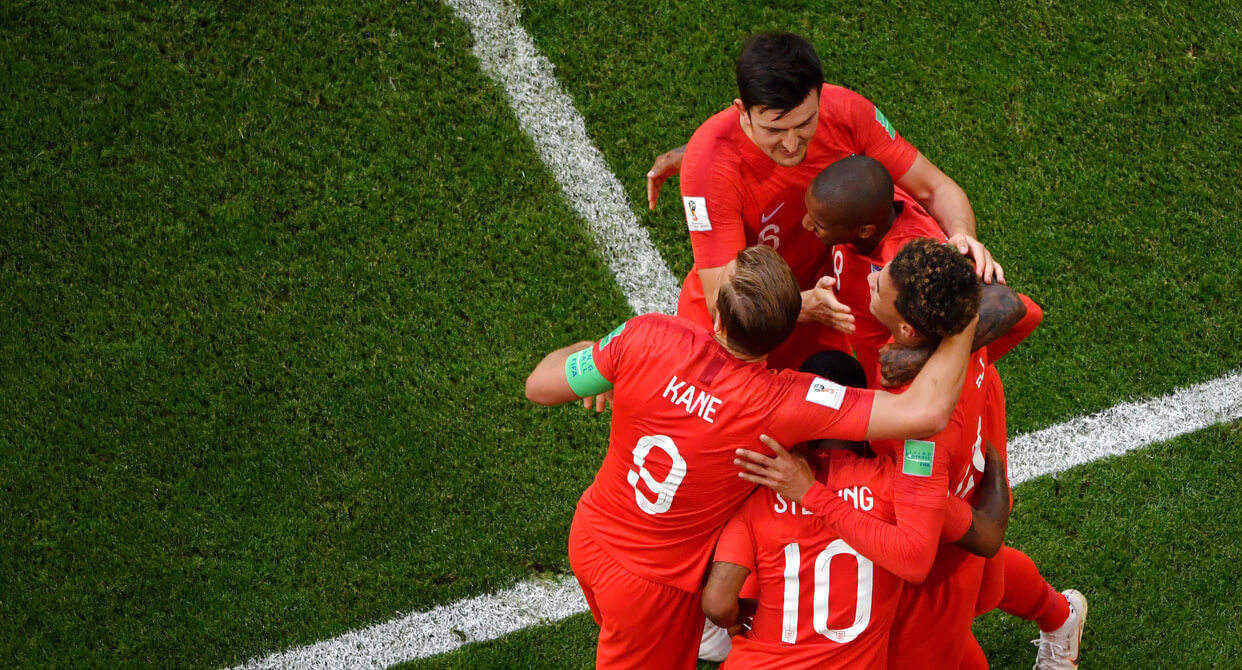 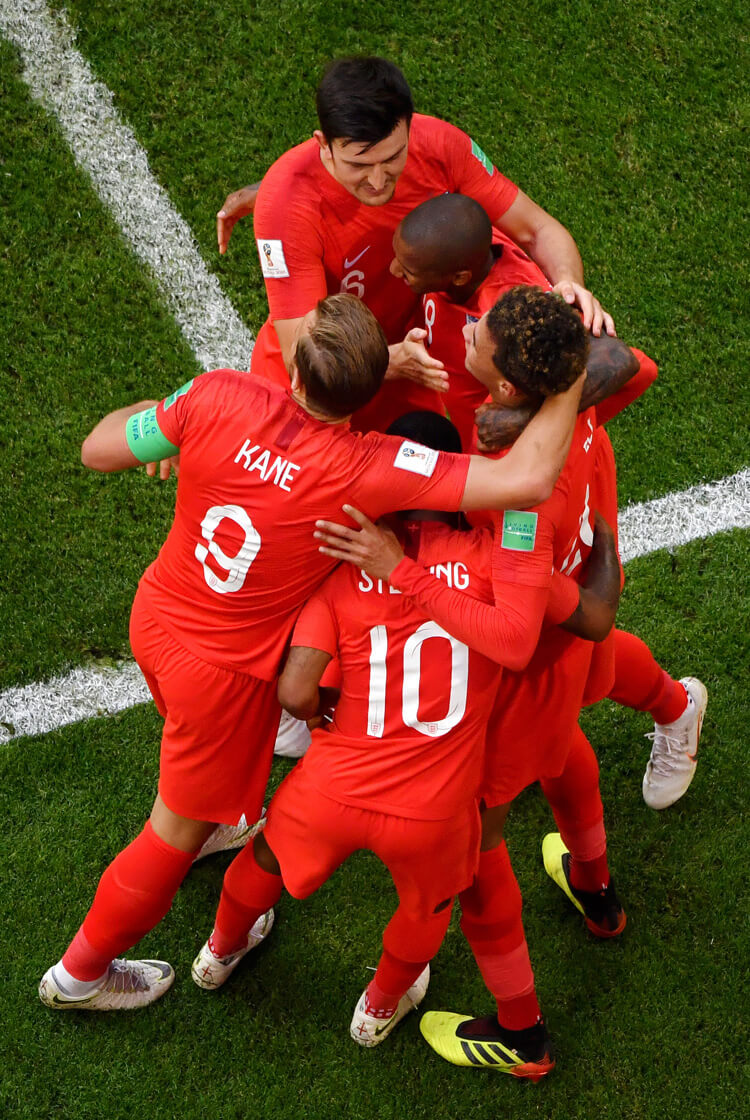 Head coach Gareth Southgate has had to navigate his England side through a World Cup path of hugely varying opponents from four different continents – but Tunisia, Panama, Colombia and Sweden have all been defeated, while the 1-0 group-stage defeat to eventual semi-finalists Belgium allowed him to rest key players ahead of what has turned into a long run in the knockout stages.

How has Southgate managed the run, and what have the key take-outs been from each of England’s five games in Russia so far? Here, our professional coaches analyse the route to the last four.

Space for Henderson
Tunisia 1 England 2
England created enough chances in the first half to win their Group G opener against Tunisia twice. The key difference between the first and second-half performances was the space that Jordan Henderson was initially given – and then subsequently deprived off when in possession.

As Henderson initially received with minimal Tunisian pressure, defensive midfielder Ellyes Skhiri was forced to step out of shape and irritate Henderson as the ball arrived at his feet. By this point, however, Henderson had already played in either Deli Alli (above) or Jesse Lingard, both of whom superbly penetrated forwards between Tunisia’s full-backs and central defenders.

Alternative dropping movements from Harry Kane and Raheem Sterling also enabled England to build to feet, rather than play repeated balls in behind. Sterling in particular found good spaces to then feed Alli and Lingard, who continued to rampage forward from midfield.

Henderson’s impact was massively restricted in the second half, as Tunisia converted to a defensive back five and placed a narrow central midfield block to protect the space in front of the back line. This reduced Henderson’s time and space in possession, and his forward passing was less accurate as he was instead forced to aim for the wing-backs rather than central attacking players. This change did allow defenders Harry Maguire and Kyle Walker to drive forward in possession, with Maguire in particular making good progress on England’s left.

Set-piece strength
England 6 Panama 1
The eight goals England scored across their first two World Cup games means they easily surpassed the combined total (five) they managed at the past two tournaments. The high return was in part down to their quality, creativity and variety at set-pieces, which accounted for six of those eight goals. Jesse Lingard’s superb strike against Panama, and the accidental heel that earned Harry Kane his hat-trick, were the team’s only open-play goals to that point.

Three of the aforementioned six goals came from corners – not surprising when you consider that England won the first header seven times from 10 deliveries in their opening two games. Harry Maguire and goalscorer John Stones both won two apiece, the latter’s first against Panama coming on the back of some intelligent blocking by Ashley Young.

Captain Kane has been encouragingly emphatic from the penalty spot, but the best of the lot was undoubtedly England’s fourth against Panama (above). Kieran Trippier started proceedings with a short pass into Jordan Henderson. The Liverpool captain then clipped a ball over the Panama defensive line, with both Kane and Maguire ready to pounce at the far post. Kane reached the ball first, nodding it down into the path of Raheem Sterling – who couldn’t miss but somehow did – before Stones nodded in the rebound. A well-planned, well-executed routine that suggested England might have more up their sleeve later in the tournament.

Dier struggles
England 0 Belgium 1
After England’s defeat to Belgium, it looked like Jordan Henderson’s position at the heart of the England central midfield was secured for the rest of the tournament. Starting rival Eric Dier, although comfortable in possession, lacked quality and in particular forward play, as the Tottenham midfielder and England captain for the evening looked oddly sluggish through the game. Perhaps due to a lack of proactive body shape when receiving (above), Dier’s passing failed to propel England forward as much as it should have.

With Marcus Rashford dropping short and away from the Belgium back line, Dier regularly had an active passing lane into Rashford’s feet. Additionally, Fabian Delph and Ruben Loftus-Cheek found spaces ahead of Dier, looking to receive within the inside channel and attack the Belgian back line. Dier rarely found any of these options, however, regularly choosing to bounce the ball back into his central defensive trio.

If he is looking to cement a starting position beyond this World Cup, then Dier will need to edit his body shape when receiving in order to open up the pitch and play forward, thus increasing the frequency of England’s attacking plays.

The back post
Colombia 1 England 1 (aet, England win 4-3 on pens)
A common feature of England’s play at this World Cup has been the movement and delivery, from both wide areas and set-pieces, towards the back post. The movement has been key because the runner will start centrally and peel off, dragging a defender with him who will often have to pick between looking at either the man or the ball – a back-post delivery makes it almost impossible to do both when starting from a central position.

Another key aspect is the movement of the second player, who runs centrally just inside the six-yard box to tap into an empty net as the goalkeeper will have adjusted his position to deal with the back-post threat. Think back to John Stones’ second goal against Panama – Raheem Sterling was actually the player meant to score that goal with his central run from the original free-kick.

The header across goal from the back-post run was something England failed to get quite right in the victory over Colombia in the last 16, with the first attacker opting to head for goal rather than across to his teammate. Both Dele Alli (pictured) and Sterling could have had goals in the match, having made exactly that same run into the central area.

Right-hand drive
Sweden 0 England 2
Naturally for England, when up against Sweden’s 4-4-2 structure in Saturday’s quarter final, the spaces were in both channels, as Sweden’s midfield and defensive units remained very compact throughout. Sweden’s full-backs often struggled as they were unsure whether to press the England wing-backs – Kieran Trippier and Ashley Young – or follow runners in behind from midfield. When in possession, both Sweden’s full-backs were also limited; they couldn’t push too high in attack for fear of a potentially devastating counter-attack from England’s pacy front line.

England prioritised their right side for their attacking build and final-third entries – of their 555 attempted passes, they played 40 per cent down their right channel. Impressively timed forward runs from Jesse Lingard within the inside right channel dragged Sweden left-back Ludwig Augustinsson away from Trippier. From here, Trippier could drive forward and provide attacking crosses. Emil Forsberg eventually dropped deeper on to Trippier, reducing the frequency of the Tottenham man’s crosses – three of Trippier’s four crosses in the game came in the opening half hour.

This pattern of movement was mirrored on England’s left, although the right-footed Young was regularly forced on to his weaker left foot, which reduced the quality and consistency of England’s left-sided attacks. The inside runs from Dele Alli – which Lingard performed on the right with such intensity – were also more sporadic. Alli preferred to move into the penalty area to attack crosses – as he did for England’s second goal – rather than create the initial space for the cross.