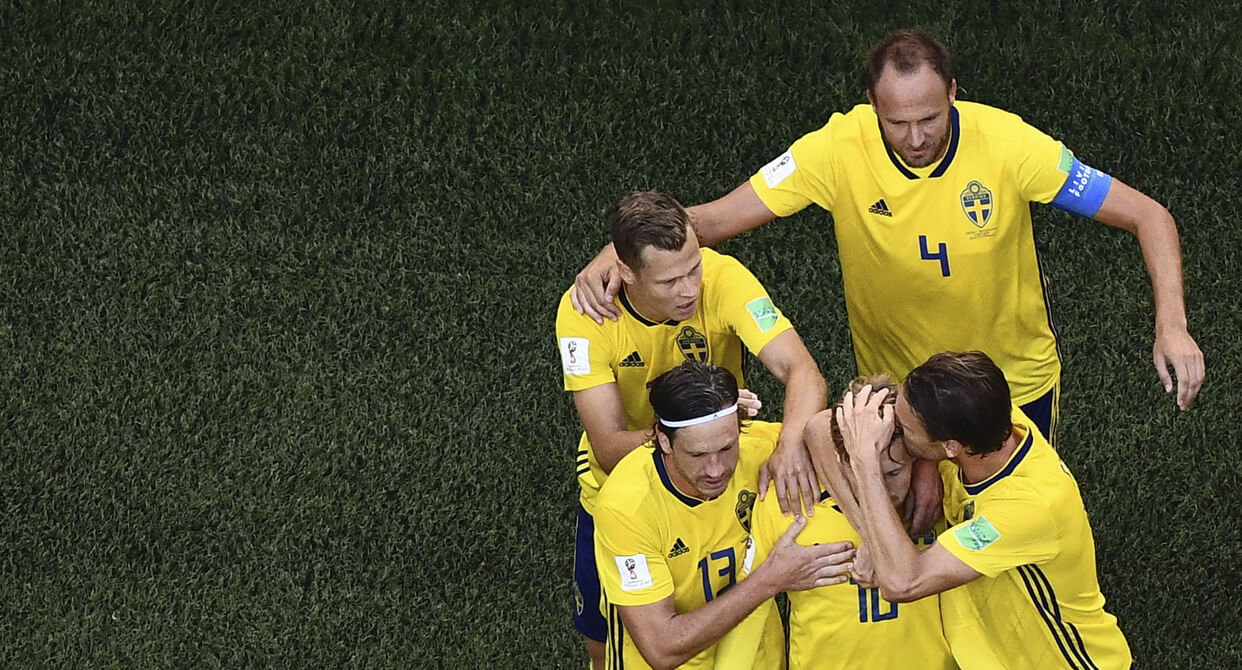 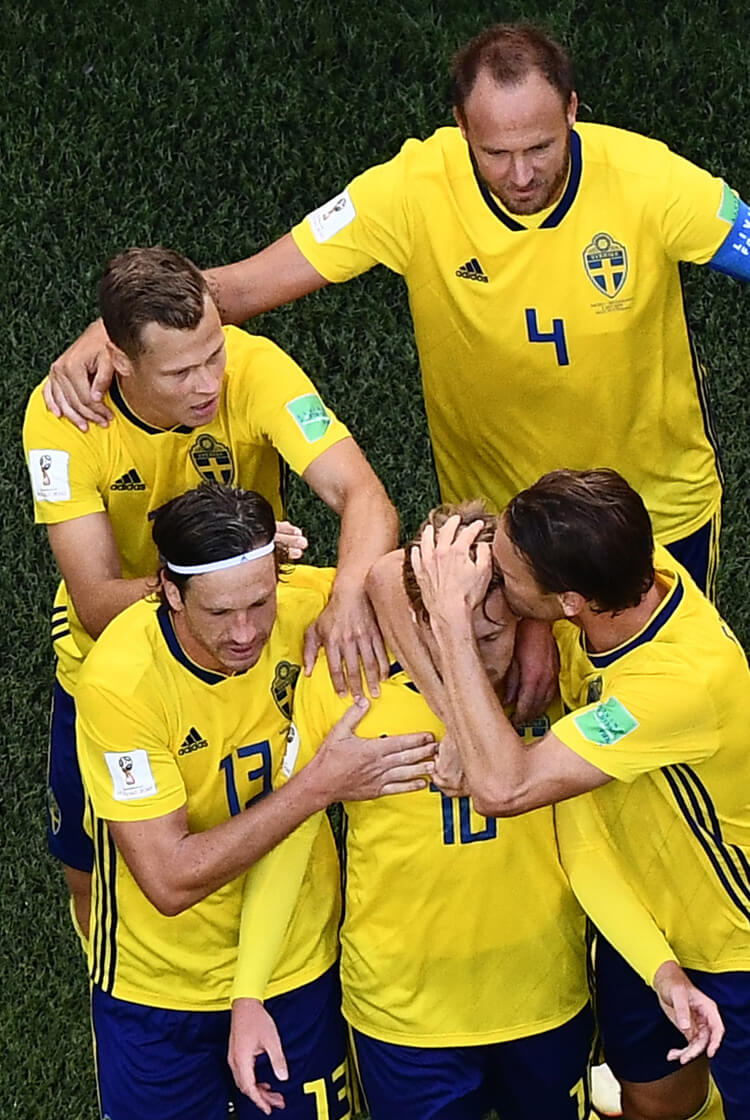 Neither side took charge of the game, as South Korea failed to even work a shot on target in the 90 minutes. Sweden didn’t carry a significantly greater threat, however – although they worked the ball well into the final third, they lacked quality in their end product.

The breakthrough came midway through the second half, however, as VAR intervened to correctly award Sweden a penalty which captain Andreas Granqvist (below) tucked away confidently. It was the first time they had won their World Cup opener since 1958 – the year they reached the final.

Germany 2 Sweden 1
Sweden demonstrated their counter-attacking capabilities with a well-organised defensive low block in their second group game against Germany, who grew frustrated with their inability to penetrate the Swedish lines. With the Germans pushing higher and higher, space in behind was begging to be exploited.

An uncharacteristically poor pass from Toni Kroos just past the half-hour mark set Sweden en route to the German goal. Ola Toivonen timed his run behind the German back line perfectly, and his deft dink over Manuel Neuer put the Swedes ahead.

Facing a barely believable early exit, Germany pegged Sweden back into a low block for the majority of the second half. Marco Reus equalised within minutes of the restart, but Sweden held firm all the way into injury time – when Kroos atoned for his earlier error by curling a last-minute winner into the top corner from a direct free-kick.

Mexico 0 Sweden 3
Sweden’s dismantling of Mexico was arguably their best performance of the tournament so far, particularly with all four teams still in the hunt for qualifying places going into the final round of group fixtures.

The pace and accuracy of Sweden’s set-pieces caused Mexico problems throughout the first half, but it took until the second half for Janne Andersson’s men to break through. Another superb counter-attack was finished by Ludwig Augustinsson (below), with Andreas Granqvist adding a second from the penalty spot 10 minutes later. An own goal completed the rout, as Mexico’s overly expansive approach in attack offered the Swedes huge pockets of space into which to counter.

Victory for Sweden, coupled with Germany’s shock defeat to South Korea, meant that the Swedes topped the group. That meant a last-16 tie against Switzerland.

Sweden 1 Switzerland 0
Both sides created enough chances to grab goals from a largely untidy match. Sweden’s chances were sourced from a combination of quick and direct attacking play, along with a host of basic errors from the Swiss back line.

Defensively, Sweden were vulnerable as Switzerland fired in crosses looking for late runners form midfield. The Swedish defence remained solid when clearing crosses directly, but lost track of runners from deeper positions. Gareth Southgate and his England coaching team will no doubt look to that on Saturday.

Eventually, Sweden grabbed the winner as Emil Forsberg’s tame effort was cruelly deflected into the Switzerland net. A late red card for Michael Lang saw the Swiss down to 10 men, as Sweden kept a third clean sheet from four matches on their way to a quarter final against England.

Emil Forsberg
Midfielder, 26, RB Leipzig
Forsberg operates on the left side of midfield for this Sweden team, and is one of their main attacking threats. His pace and desire to get forward mean that they often prioritise their counter-attacks down his flank. By linking up with Ola Toivonen, who likes to drop deep during transitions, Forsberg has the speed and agility to break free from recovering defenders.

When in possession, Forsberg (above) is also capable of driving infield, looking again to link up with Toivonen or Marcus Berg. From here, this enables left-back Ludwig Augustinsson to overlap – meaning Forsberg can offer an additional central presence to attack crosses and cut-backs.

Marcus Berg
Forward, 31, Al-Ain
Berg is Sweden’s main goal-scoring threat. He finished as not only Sweden’s top scorer in qualifying, but also within the whole of Group A – a group also featuring Kylian Mbappe, Antoine Griezmann and Arjen Robben to name but three.

Despite playing his club football in the UAE, the 31-year-old (above) has continued to perform well for the national team in the central attacking role previously inhabited by a certain Zlatan Ibrahimovic. Coupled with the hard-working Toivonen – the pair have a solid understanding that dates back to various youth teams – Berg is an adaptable striker who is mobile enough to lose defensive markers and finish on goal in tight areas. His direct movements will also add to the potency of Sweden’s counter-attacks, as he works to disorganise defences and create space for runners from deep. England’s back three are not in for an easy ride.

Janne Andersson, 55
The current Swedish head coach (above) took charge of the national team in June 2016, after a successful domestic spell back in his native Sweden. Winning the Swedish league in 2015 with IFK Norrköping drastically increased his profile after a solid if unspectacular coaching career to that point.

Andersson’s preferred 4-4-2 formation has been a staple of his management, as he currently deploys this structure with the national team. Basing his side on transitional moments, Sweden have impressed with their defensive organisation and their ability to frustrate and, in the case of both France and Italy on their way to Russia, defeat the supposed giants of world football. Three clean sheets in four matches so far is a testament to the defensive foundations Andersson prefers to build upon. With effective set-pieces and consistently effective counter-attacks, he is in charge of an excellent out-of-possession team.

Defence
Sweden are very comfortable when out of possession. They employ a basic 4-4-2 structure, often bringing all 11 players behind the ball. Within the midfield and defensive units, they are extremely co-ordinated with regards to their spatial compactness. Reducing the gaps between their defensive lines is of paramount importance, as they utilise a position-oriented approach. Any time the ball is moved into and received within this structure, both units collapse on one another, effectively reducing the central space to a minimum (above).

Excluding their opening game against South Korea, Sweden have averaged only 33 per cent of possession – not having the ball doesn’t seem to affect this mentally resilient side. Andersson has also made only one change to his goalkeeping and defensive unit in four matches. This is a consistent, strong and well-organised defensive unit – any team wanting to break them down will need to be at their attacking best.

Attack
Naturally coupled with their deep defensive structure, Sweden will utilise an aggressive and direct counter-attacking style as soon as possession is recovered. If their opponents push multiple players ahead of the ball, this team is more than capable of exploiting the available spaces in behind.

Their main attacking advantage is leaving two players high when defending for prolonged periods. This enables Sweden to secure possession during the first pass out of defence. From here, they can gain full control of the transition, with the support of forward runs – usually by the wide midfielders in the channels. As a high proportion of possession-based teams utilise attacking width courtesy of the full-backs moving higher, this enables Sweden to quickly and purposefully counter-attack in the spaces they leave behind (above).

However, as their goal against Switzerland proved, they are also proficient at building from deep. Despite their lack of possession, Sweden can build using multiple short passes, but often do so with a hint of directness. They will look to play forward as frequently as possible, as high-pressing teams can catch them out – particularly at the back, where an accurate range of passing is limited.

Against England
It’s likely that Sweden will continue with their 4-4-2 structure against England’s 3-1-4-2, which will lead to a few interesting key battles. With England deploying wing-backs, Sweden will be horizontally stretched, particularly within their defensive line. Harry Kane and Raheem Sterling are likely to remain in the central channel, supported by Dele Alli and Jesse Lingard. How Sweden deal with overlapping runs from Danny Rose, who may come in for Ashley Young, and Kieran Trippier will be of interest.

Nullifying the central threat of England’s final-third entries will still remain a priority for Sweden, and their compactness in defence should help them with this. England’s quick combination in the final third hasn’t been that fluid of late – they particularly struggled to combine in tight areas against Colombia. Sweden will likely look to mirror the aggressive Colombian approach in central defence, thus reducing the effectiveness of England’s attacks.

From here, Sweden’s front pairing of Marcus Berg and Ola Toivonen will have easier attacking access on the transition due to England’s defensive set-up. Jordan Henderson’s role will be crucial in the disruption of the Swede’s counter-attacks, as his intense pressing will harry the Swedish front line on their first touch.

With England’s wing-backs likely to consistently push high in attack, Sweden will have ample space to transition into the channels. Well-timed runs from the wide midfield players could provide access to England’s back line, should they avoid the energetic press of Henderson in the central lane.

Interestingly, both sides will be a threat from set-pieces, with a particular emphasis on attacking corners. Both England and Sweden have powerful defenders who can turn match-winners if the game proves a tight, tense affair in open play.