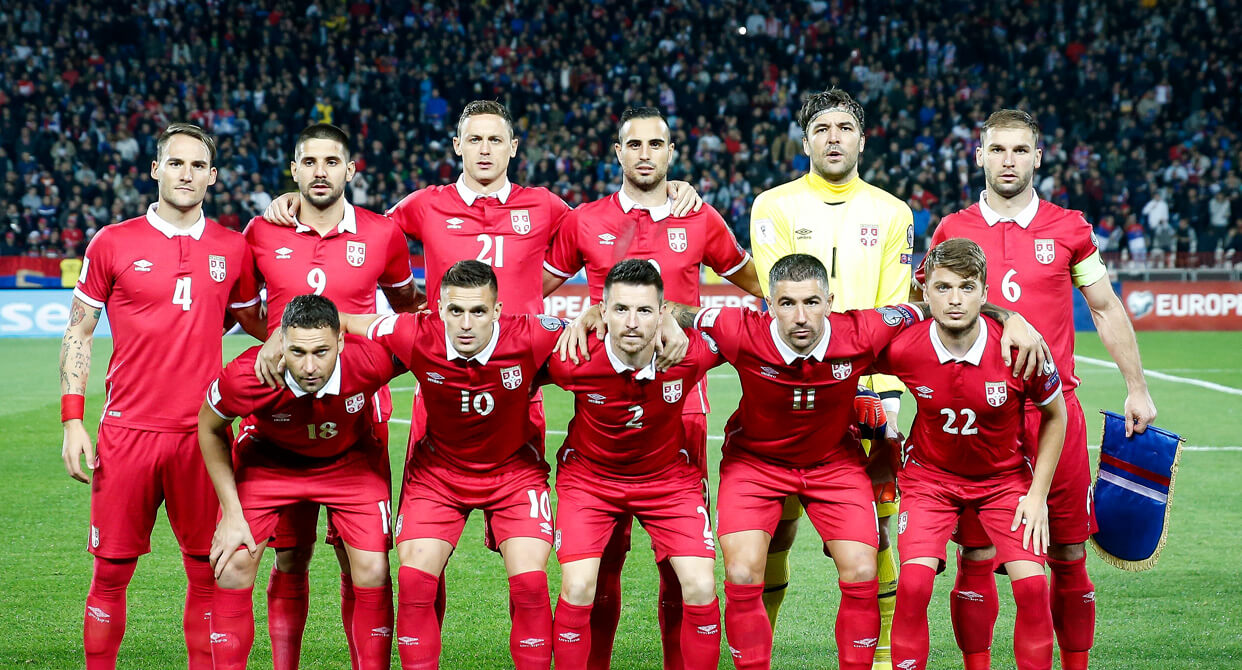 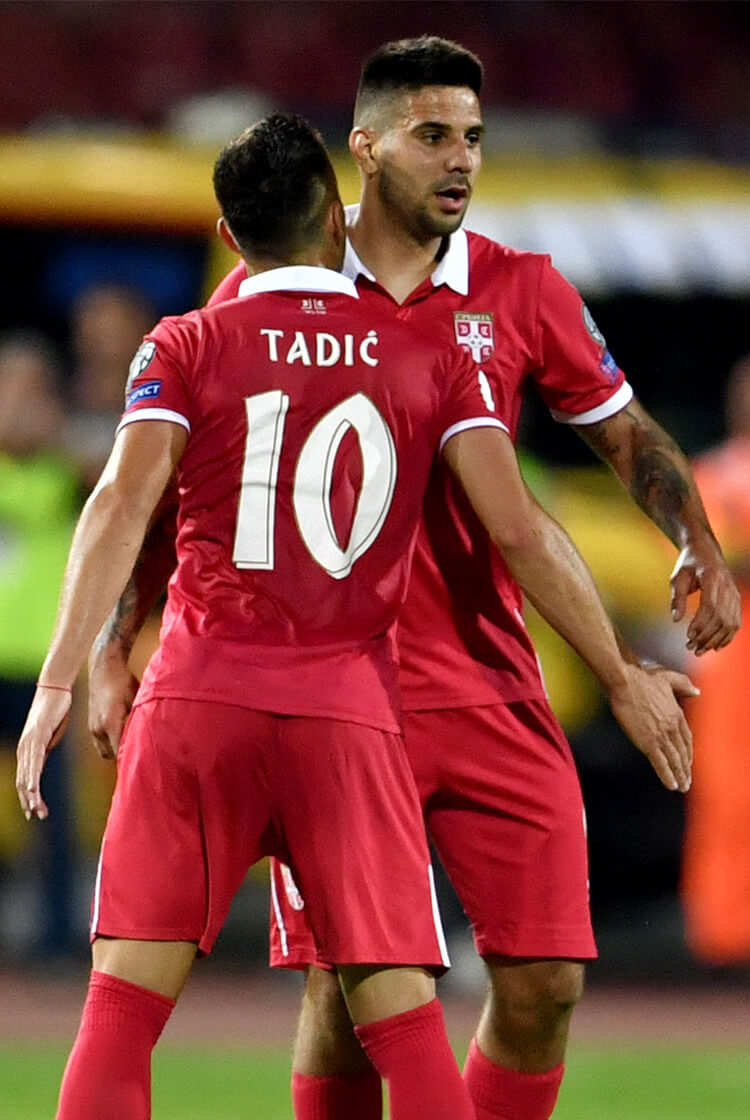 Qualifying route
Serbia secured their spot in Russia as winners of a closely contested Group D in European qualifying. They kicked off their campaign with a 2-2 home draw against eventual group runners-up the Republic of Ireland, and remained unbeaten until going down 3-2 in Austria in their penultimate fixture.

Defeat in Vienna took matters to the final game of the group, but a home fixture against winless Georgia looked manageable – and so it proved, just about, as Aleksandar Prijovic’s first international goal earned his country the win they needed to top the group. After missing out on Brazil in 2014, Serbia had qualified for their second finals as a standalone nation.

Serbia 3 Austria 2
Two unbeaten teams met in Belgrade for an important early fixture in Group D, and the home side edged a close encounter. Serbia set up in their usual 3-4-3, dropping into a 5-3-2 out of possession, and they started brightly – barely five minutes had passed when superb link-up play between Filip Kostic and Dusan Tadic created a chance for Aleksandar Mitrovic (above) to slot home the opening goal.

Marcel Sabitzer equalised for the visitors some 10 minutes later, before Mitrovic netted his and Serbia’s second with a strong header from a Tadic cross midway through the first half. Austria fought back again in the second half, veteran Marc Janko prodding home after the hosts had failed to clear their lines, but Tadic turned finisher from creator to fire home the winner 15 minutes from time. An important three points against potential rivals set Serbia up nicely for the rest of the campaign.

Republic of Ireland 0 Serbia 1
A top-of-the-group clash between two sides competing for the single automatic qualification spot was narrowly won by the visitors in a tense game at Dublin’s Aviva Stadium.

Serbia were organised into their usual 3-4-3 formation and showed their intent early with several direct balls in to the imposing figure of Mitrovic up front, with the more creative forces of Kostic and Tadic looking to play off him. Martin O’Neill’s Republic of Ireland had a headed goal correctly disallowed for offside in the first half, but didn’t create any other chances of real quality in what soon became a scrappy affair.

The breakthrough came 10 minutes into the second half, and for the visitors. One of Serbia’s key tactics in qualifying was to have the full-back on the opposite side of the play arrive late in the box, and this is exactly where Aleksandar Kolarov (below) found himself to hammer home off the underside of the bar.

A red card for supposed last man Nikola Maksimovic with more than 20 minutes remaining increased the pressure on the Serbia back line, but they ultimately held on to claim what proved the decisive victory in the group.

Alexsandar Mitrovic
Forward, 23, Newcastle United
Serbia’s main goal threat, Mitrovic scored six times in qualifying to become the top marksman in Group D. The Newcastle striker, who played a huge role in Fulham’s promotion to the Premier League this season, is capable of scoring all sorts of goals but also an excellent focal point for Serbia’s attacks. He is one of only three players in the World Cup squad – alongside Dusan Tadic and veteran defender Branislav Ivanovic – to have more than 10 goals for Serbia.

An imposing figure, Mitrovic began his club career at Teleoptik in his native Serbia. Subsequent stints at Partizan and Anderlecht saw him impress enough to earn a move to the Premier League with Newcastle United. He has spent three seasons at Newcastle, but was loaned out to Fulham – with superb success – for the second half of the most recent season.

We can expect to see Mitrovic, still only 23, play a key role for his country in Russia. The target man for the majority of Serbia’s play, he is good at winning the first ball and bringing others into play – he has a good relationship with fellow attackers Tadic and Kostic, from whose deliveries he can be a major aerial threat.

Dusan Tadic
Attacking Midfielder, 29, Southampton
Tadic provides the majority of the technical quality in this Serbian team, and is a major source of creativity in the final third. The Southampton man played on the right side of the front three in qualifying but operates mainly in central areas, allowing the full-backs to provide the width.

The 29-year-old made his senior professional debut in football at just 18, for Vojvodina in the Serbian league. After four years and more than 100 appearances, he moved to the Netherlands, where another four seasons were split evenly between Groningen and FC Twente. A move to the Premier League with Southampton followed – although an inconsistent performer at St Mary’s, he remains one of the club’s key players.

As one of the squad’s central core of senior figures with more than 50 caps, Tadic (below, right) will start every game for Serbia in Russia – potentially in a slightly wider role than he inhabited through qualifying. His passing and crossing ability make him the idea supplier for Mitrovic, but he can chip in with goals as well. Either way, he’s a key man.

Luka Milivojevic
Midfielder, 27, Crystal Palace
One of Serbia’s anchor players, Milivojevic helps to provide the security in midfield that allows the creative attacking talents of Tadic and Kostic to flourish ahead of him. The discipline of Milivojevic and central midfield partner Nemanja Matic also enables Serbia’s full-backs to kick on and provide the attacking width in possession.

Milivojevic (above, left) spent six years playing in his homeland before moving to Belgian club Anderlecht, where he spent a single season before leaving for Olympiakos in Greece. Crystal Palace came calling in January 2017, since when he has established himself as a key operator – and nerveless penalty taker – for the south London side.

At the World Cup, expect to see the 27-year-old deployed in a deep, central role with the occasional licence to get forward. He will play a key part in Serbia’s shape out of possession, in which he denies opportunities for central penetration through his covering positions.

Mladen Krstajic, 44
The national team role is a first position as a full-time coach for Krstajic, a relative unknown compared with many of his peers in Russia. The Serbian took over from Slavoljub Muslin in October 2017, after the team had already qualified for the World Cup, and has a contract lasting initially until the end of the tournament.

Krstajic enjoyed a 19-year playing career across Serbia and Germany, winning five domestic titles in two spells with Partizan Belgrade and a single Bundesliga with Werder Bremen in 2004. An experienced international who won 59 caps for his country, Krstajic will be an interesting coach to watch in Russia. If nothing else, he has the element of surprise over almost all of his rival coaches.

Attack
During qualifying, Serbia set up in a 3-4-3 formation and largely played direct into Aleksandar Mitrovic as the focal point. Since Krstajic has taken charge, however, they have switched to a 4-2-3-1 (sometimes 4-3-3) formation and looked to play through the thirds more regularly. This may well be what we see from Serbia in Russia, although don’t be too surprised if they revert to direct play when they face Brazil in their final group game. What hasn’t changed under the new coach is the use and threat of Mitrovic. He still holds play up really well, albeit now slightly more with his feet than his head, and can still be lethal inside the box.

Crosses will be a real threat from this Serbian team, and with that in mind it will be interesting to see how regularly Aleksandar Kolarov and Antonio Rukavina get forward from what will now be full-back rather than wing-back roles. If they are to sit a little deeper, will that give the two deep-lying central midfielders an opportunity to break forward more than previously? Either way, there are goals in this team – and with Switzerland and Costa Rica completing the group, they will fancy their chances of getting out of it.

Defence
Despite a heavy emphasis on defensive protection with a central back three, two screening midfielders and full-backs that tucked in to make a back five, Serbia still shipped 10 goals in qualifying. Switching to a back four may not improve matters – particularly as a more possession-based approach might leave them vulnerable to a high press – but they have looked comfortable when defending in their organised blocks. With experienced operators such as Nemanja Matic (above, right) and Luka Milivojevic protecting the back four, opposition teams shouldn’t have too much joy in trying to penetrate through central areas.

One key area of weakness that teams should look to exploit is the space behind the defence. Several goals conceded in qualifying – and some in friendlies under the new manager – have come from passes directly in behind the back line both centrally and from out wide (above, left). Quick forwards may enjoy some success against a back line that don’t like people running in behind them.

Squad depth
With Matija Nastasic missing through injury and Nemanja Maksimovic not selected, Serbia include only four defenders in their squad who started any of the games in qualifying. With the remaining four defenders in Krstajic’s squad boasting a combined number of caps barely in double figures, defensive strength in depth would be an obvious concern – although Werder Bremen youngster Milos Veljkovic is one of four members of the squad to have graduated from the Serbian golden generation that won the Under-20 World Cup in 2015 (above).

Liverpool’s Marko Grujic, Lazio’s Sergej Milinkovic-Savic and Adem Ljajic of Torino offer inexperienced but promising options across the midfield, with Luka Jovic of Benfica and Aleksandar Prijovic of PAOK providing more youthful back-up to Mitrovic in attack. One thing is for sure – there is more talent than experience coming from the Serbian bench in Russia.