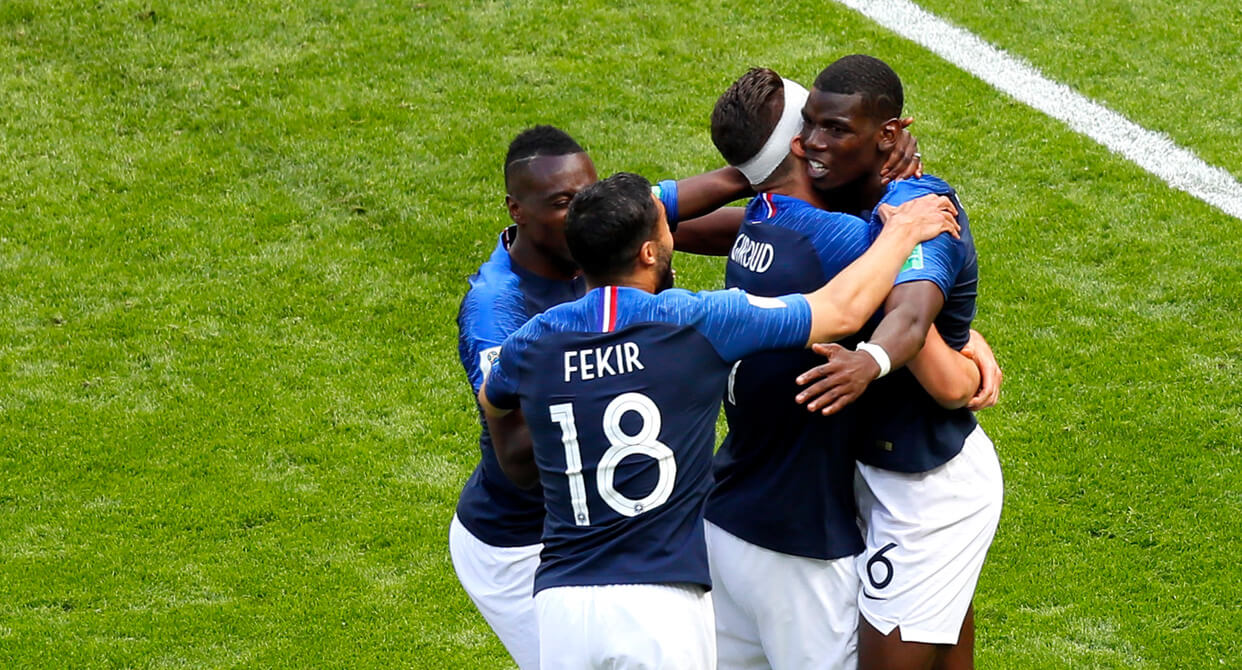 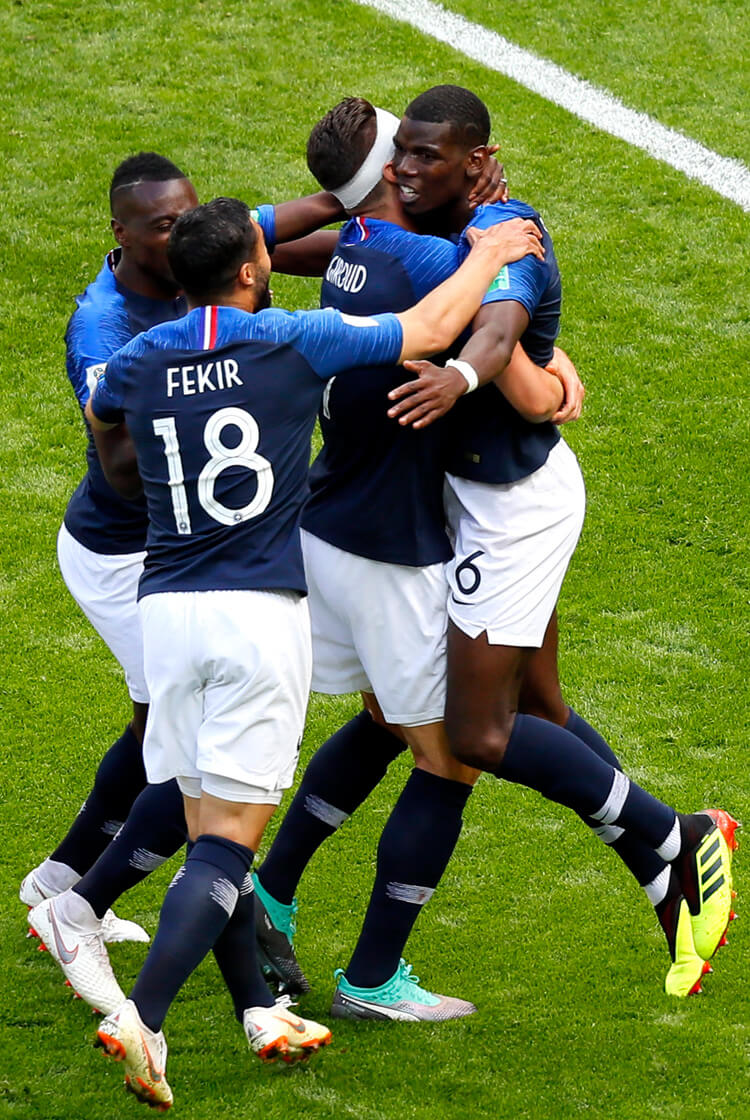 Premier League Watch
After a relatively low-key Premier League presence across the opening two days of the World Cup, the weekend featured a whole host of familiar faces. Not least in France’s Group C opener against Australia, where Tottenham goalkeeper Hugo Lloris produced one excellent save but could do little to stop Aston Villa’s Mile Jedinak from the penalty spot in an otherwise quiet afternoon. He will have busier days to come at the tournament – as will Chelsea midfielder N’Golo Kante, who operated as the holding midfielder and offered few suprises with his terrific work rate and ability to train possession for the team.

Playing ahead of Kante was Manchester United midfielder Paul Pogba, who offered two key contributions: first, the superb through ball from which Antoine Griezmann won the opening penalty; and second, the shot that led to an albeit fortunate winning own goal late on. His performance lacked the flair and personality many have come to expect from Pogba, but this was an effective and game-deciding display that is more likely to bring France success.

Starting opposite Pogba for Australia was Huddersfield midfielder Aaron Mooy, who offered some threat with his set-piece delivery – it was his ball into the France area that brought about Samuel Umtiti’s bizarre handball.

Later that evening, a trio of Premier League men formed the spine of Denmark’s somewhat fortunate victory over Peru in the same group. Kasper Schmeichel made some smart saves in his team’s 1-0 win, offering a calm presence behind a back line featuring Anders Christensen; the Chelsea defender had to be on his game to deal with Peru’s rotation and movement in attack, although he couldn’t prevent a number of chances on the night and will have to be better with France looming. Tottenham playmaker Christian Eriksen wasn’t at his creative best as his team struggled to impose their game on energetic South American opponents, his efforts naturally overshadowed by those of matchwinner Yussuf Poulsen.

Elsewhere, a pair of Premier League winners with Manchester City featured in underwhelming performances from the South American giants. Nicolas Otamendi was part of the Argentina defence that failed to properly defend the space between the six-yard box and edge of their area against Iceland, while central striker Gabriel Jesus failed to register a single shot in Brazil’s 1-1 draw with Switzerland. The eternally divisive Mesut Ozil will again have split opinion in Germany’s shock 1-0 defeat to Mexico, for whom West Ham forward Javier Hernandez led the line superbly.

Premier League Potential
In an era when full-backs are becoming increasingly vital to how teams play, Peru’s Luis Advincula showed in his team’s unfortunate defeat to Denmark that he is a good one-on-one defender who can support attacks and operate practically as a winger. The 28-year-old (above) possesses electric pace and would suit a team that plays with full-backs as their main wide outlet and wingers who prefer to move inside. Teams such as Everton or West Ham would suit his style of play.

Impressive in Brazil four years ago, Mexico goalkeeper Guillermo Ochoa showed against world champions Germany what he is capable of, underlining his quality as a shot-stopper with a string of well-handled saves. The 32-year-old could be of interest to the likes of Watford and West Ham, who may well be looking for a goalkeeper this summer. Keylor Navas’ performances at Brazil 2014 earned him a move to Real Madrid – could Ochoa, currently based in Belgium with Standard Liege, find a money-spinning move to the Premier League within reach?

Stats of the weekend

Argentina on the panic button
In their opening fixture against Iceland, Argentina had no fewer than 27 shots, 11 of which predictably came from Lionel Messi. Of the total of 27 shots, only seven were on target, with 10 blocked and another 10 off target. Some 55 per cent of their efforts on goal came from outside the area, and an even higher percentage (60) came in the second half, when panic began to set in. A focus on quality rather than quantity might have yielded better results.

Controlled Croatia
Marcelo Brozovic played only 34 minutes of Croatia’s game against Nigeria, but he registered a higher successful pass rate (93 per cent) than any of his teammates who started. Croatia had been sending long, direct passes to their four forward players in the first half, but the introduction of Brozovic in the second half gave the team more of a balance and allowed them to play more penetrative passes between the lines. This attracted Nigerian defenders out of the last line of defence to close a more advanced Luka Modric down, which in turn created more space behind and around them for combinations.

Quickfire Mexico
There were only 12 seconds between Mexico regaining the ball in their defensive third and the ball hitting the back of the Germany net in their shock win on Sunday. The goal was a perfect counter-attack: the player regaining found a penetrative option immediately; the player receiving, Javier Hernandez, had his back to goal and was positioned on the halfway line so Andres Guardado, reading his body shape, provided a ‘set’ option; Hernandez spun away in behind to receive the return pass, and Hirving Lozano cleverly identified the counter-attack; he made the third-man run in behind the defence and took his chance calmly when played in by Hernandez.

Germany exposed
Germany’s two central midfielders, Toni Kroos and Sami Khedira, left their defenders exposed on far too many occasions and ultimately left the team highly vulnerable to the counter-attack. The role of the two central midfielders in a 4-2-3-1 is to provide a link between defence and attack in possession and to protect the defence out of possession. Generally, one will hold and one will join in the attack, although both may stay deep if the full-backs push on as well. What shouldn’t happen is that both go and join in further up the field, with no protection left for the defenders in the middle of the pitch (above). Mexico’s goal and several of their excellent chances on the counter-attack could have been prevented had this security been in place.

Iceland’s low block
The standout factor of Iceland’s play against Argentina was the quality of their low block (above). The organisation and discipline of this side out of possession is exceptional; the distances between the individuals in the same unit is absolutely key, and was vital in keeping Lionel Messi in particular at bay. The major feature of this block is that, whoever the ball-carrier is, Iceland must have two players closing him down. If and when the ball-carrier moves possession to a teammate, there has to be two players nearby to shut him down immediately. When the passes are stretched over a longer distance, this can become more difficult – but when the attacking players are close to each other, as was too often the case from Argentina in advanced positions, it makes the defenders’ job significantly easier.