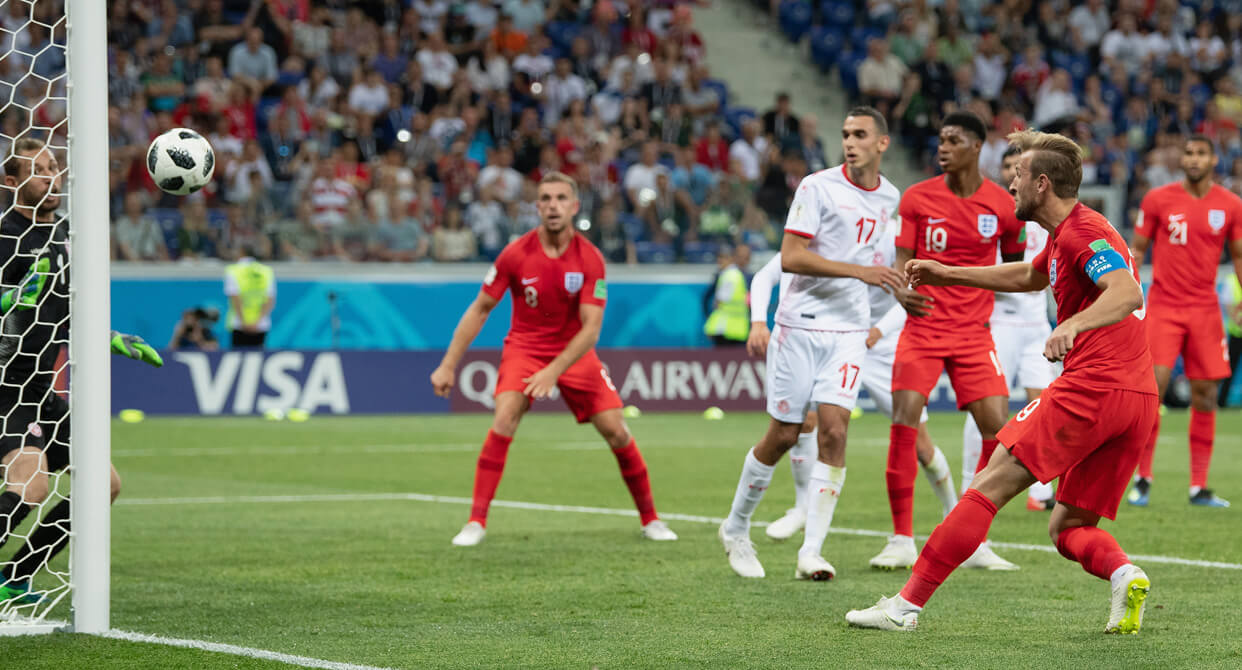 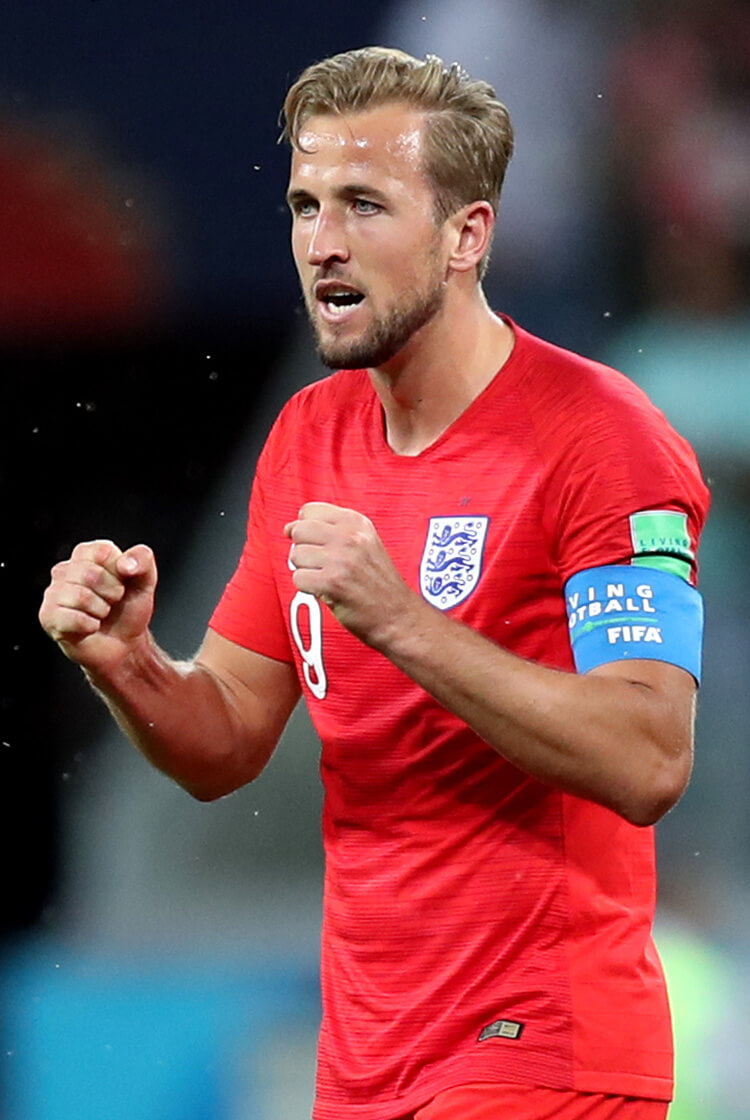 Premier League Watch
Harry Kane naturally stole the headlines for England on day five of the 2018 World Cup, grabbing two goals on his World Cup debut. Beyond his brace, however, the Tottenham forward’s impact within the penalty area was actually relatively limited. Forward runs in behind from club teammate Dele Alli and Manchester United’s Jesse Lingard meant Kane’s movements were generally towards the ball, looking to link up the play with midfield.

This showed as England wasted numerous chances throughout the first half, with Kane absent from the main danger zone and chances falling to far less clinical players. When he did find himself in a goalscoring position, he demonstrated just the intuition lacking from his teammates to score his 15th goal in just 25 games for England – a record bettered only at that stage by Gary Lineker.

As England continued to create chances, Kane’s movement – although creating space for midfield runners – meant he was further and further away from the Tunisia penalty area at the moment of penetration. As chances came and went, it looked as though England’s best goalscorer would remain powerless as an opening-game draw loomed.

However, Kane grabbed his and England’s second with only minutes remaining, his consistent ability to hit the target paying off from only his second chance of the game. In the process, Kane also became the first player to score against two different goalkeepers in the same World Cup game since Diego Forlan for Uruguay against hosts South Africa in 2010.

Earlier in the day, Premier League influence was predictably at the heart of Belgium’s ultimately easy victory over World Cup debutants Panama. After Dries Mertens had volleyed Roberto Martinez’s men into an early second-half lead, a glorious Kevin De Bruyne cross with the outside of his right foot set up Romelu Lukaku for his first goal of the tournament. The Manchester United forward soon had his second, the assist coming from captain and playmaker Eden Hazard after De Bruyne had won possession on the edge of his own area.

England experiments
England scored a deserved yet dramatic late winner as they overcome controversy and, at times, their own failings to beat Tunisia 2-1. Harry Kane’s second of the evening was the first time England have ever scored a stoppage-time winner in regular time during a World Cup.

It was another evening for firsts, as no fewer than nine of Gareth Southgate’s starting XI were making their World Cup debuts. This particular line-up had also never started together as a whole before – the ninth time in a row England had opened their World Cup campaign in such fashion, which perhaps helps to explain a record of only four wins from those nine fixtures.

Set-piece specialists
From the 32 total goals scored in the opening five days of Russia 2018, a whopping 16 – that’s 50 per cent, for the mathematicians among you – stemmed from set-piece situations. This figure could well be further on the rise for the remainder of the tournament – in Brazil 2014, 11 per cent of all goals came from corners alone.

Six of the opening 32 goals at this year’s tournament came from the penalty spot, with missed efforts from Argentina and Peru preventing the ratio from being even higher. A further six set-piece goals have stemmed from free-kicks – three direct and three coming from the second or third phases. The final four goals can be attributed to corners, with powerful headers from close range the usual result.

This glut of set-piece goals could possibly stem from a more organised defensive approach during open play. Breaking down an international standard of opponent is no mean feat, particularly now with so many teams choosing to set up in a mid/low defensive block.

South Korean struggles
The wait for a World Cup victory continues for South Korea, who fell to a 1-0 defeat to Sweden. They have won only once in their past nine World Cup games – against Greece, in 2010. Despite featuring at more World Cups than any other Asian nation, they struggle to reproduce their qualifying form on the biggest stage.

Monday’s clash with Sweden couldn’t have started any more slowly; it took until the 20th minute for the first shot of the match to be hit in anger – the second longest wait in World Cup history. Over the whole 90 minutes, South Korea managed only five shots in total, and not one on target – the first time since 1966 they’ve gone an entire match without one.

Space for Henderson
England created enough chances in the first half to win their Group G opener against Tunisia twice. The key difference between the first and second-half performances was the space that Jordan Henderson was initially given – and then subsequently deprived off when in possession.

As Henderson initially received with minimal Tunisian pressure, defensive midfielder Ellyes Skhiri was forced to step out of shape and irritate Henderson as the ball arrived at his feet. By this point, however, Henderson had already played in either Deli Alli (above) or Jesse Lingard, both of whom penetrated well between Tunisia’s full-backs and central defenders.

Alternative dropping movements from Harry Kane and Raheem Sterling also enabled England to build to feet, rather than play repeated balls in behind. Sterling in particular found good spaces to then feed Alli and Lingard, who continued to rampage forward from midfield.

Henderson’s impact was massively restricted in the second half, as Tunisia converted to a defensive back five and placed a narrow central midfield block to protect the space in front of the back line. This reduced Henderson’s time and space in possession, and his forward passing was less accurate as he was instead forced to aim for the wing-backs rather than central attacking players. This change did allow defenders Harry Maguire and Kyle Walker to drive forward in possession, with Maguire in particular making good progress on England’s left.

Packed Panama
Belgium stretched their unbeaten World Cup group-stage run to 10 games with a comfortable 3-0 win over Panama. The Red Devils set up in a 3-4-3 structure, with Thomas Meunier and Yannick Carrasco as very attack-minded wing-backs. Kevin De Bruyne was deployed in a deeper role, from where he could orchestrate the tempo and rhythm of Belgium’s deep build.

The veteran Panama forward Blas Perez dropped very deep, creating a central diamond with Armando Cooper and Anibal Godoy in central midfield (above). Gabriel Gomez provided cover at the base of the diamond, blocking access into the feet of Romelu Lukaku.

Initially, Belgium struggled to penetrate between Panama’s lines, as both Dries Mertens and Eden Hazard moved centrally and towards the ball. The attacking pair looked to receive on the half-turn and drive forward between the Panama full-backs and central defenders. But with access blocked off, Belgium were forced to build in wide areas with their wing-backs. Panama defended the subsequent crosses into Lukaku well, as the Red Devils struggled to convert their dominance in possession into goals.

Eventually Belgium broke down Panama, as De Bruyne moved higher during the build. The Belgian back line then fired balls into the more advanced players, as De Bruyne often lured a marker away from Mertens or Hazard. De Bruyne’s quality in possession showed for Belgium’s second goal, with a curved ball on to the head of Lukaku, who couldn't miss from close range. Belgium’s last 11 World Cup goals have all come during the second half, as their patience was duly rewarded.