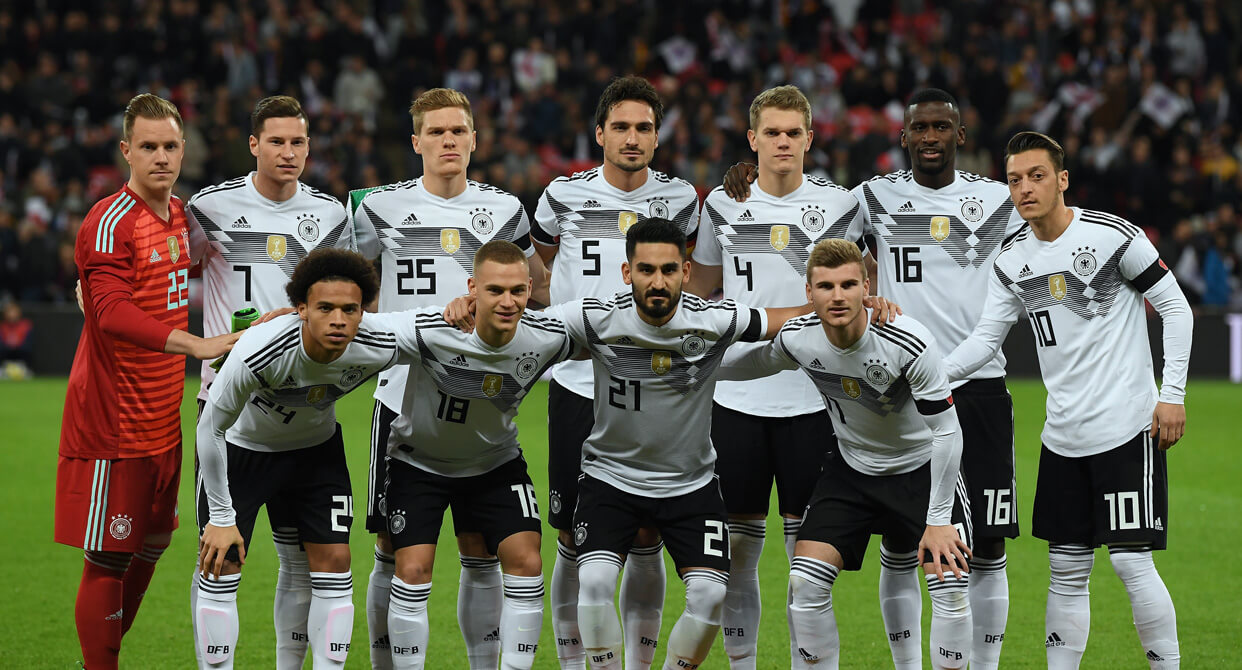 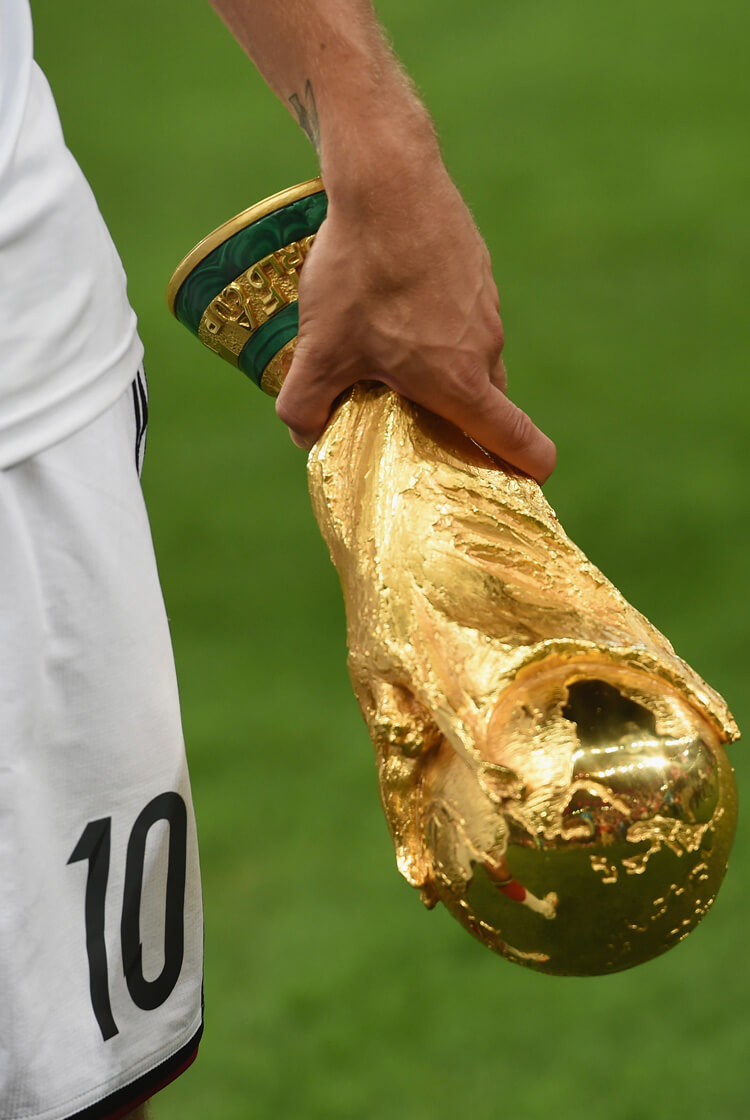 Qualifying route
Germany dominated Group C of the UEFA qualifiers from start to finish, completing a 10-game winning streak to match their efforts ahead of the 1962 and 1982 World Cups. A third 100 per cent qualifying campaign sets them aside from the rest of Europe – no other nation has managed it more than once.

The 43 goals Joachim Low’s men notched over the 10 games set a new record for goals scored – tied with Belgium, who scored the same number in Group H – in a European qualification process. The Germans also averaged 69 per cent possession and boasted a whopping 92 per cent pass rate during qualification. They simply overran and outplayed largely inferior opposition with consistently slick and accurate passing.

Having never failed to qualify for a World Cup – they didn’t enter in 1930 and were banned from competing in 1950 – the defending champions head for Russia with a squad packed with defensive and midfield talent in fine form.

Czech Republic 1 Germany 2
Germany were already six wins from six and in control of the group by the time they visited Prague last September. Normal service looked like being resumed when Leipzig forward Timo Werner gave Die Mannschaft an early lead after running on to a well-weighted Mesut Ozil ball.

The hosts responded well, however, and a superb 30-yard strike from Vladimir Darida late in the second half drew them level, with Marc-Andre ter Stegen left helpless in the German goal.

With time seemingly running out, Mats Hummels (above) rose highest inside the Czech penalty area to meet a Toni Kroos free-kick, looping the ball into the top corner with a fine header. A hard-earned victory for Germany maintained their perfect win record.

Northern Ireland 1 Germany 3
Despite only needing one point to confirm top spot in the group and a guaranteed trip to Russia, Germany cruised to a 3-1 victory in Belfast (below). A sensational second-minute strike from long range, courtesy of the right foot of Bayern Munich’s Sebastian Rudy, provided the platform from which the Germans could dominate.

A similarly brutal second strike from Sandro Wagner practically confirmed all three points, as Northern Ireland struggled to contain the movements and rotations within the German midfield. The fresh inclusion of the Bayern Munich forward looked justified, although he has since been omitted from the final 23-man squad for the finals.

Full-back Joshua Kimmich added a third late on, before Josh Magennis grabed a stoppage-time consolation for the hosts.

A product of Bayern Munich’s youth academy, Hummels had to move away from the nation’s biggest club to kickstart his career. An initial loan spell with Borussia Dortmund turned into a permanent move that led to an eight-year stay that yielded two Bundesliga titles and a Champions League final. He returned to Bayern in the summer of 2016.

An imposing central defender, Hummels has won many plaudits not just for his defensive strength, but also his ability to cleanly progress the ball from deep. The 29-year-old can turn defence into attack with solid pressing, jockeying and tackling, coupled with accurate long balls to set up potential counter-attacks.

Not surprisingly, he plays a central role in Joachim Low’s chosen back line, winning more than 60 caps since his debut in 2010. He was part of the team that won the World Cup four years ago, scoring against Portugal in the group stages and again in the quarter-final win over France.

Mesut Ozil
Attacking midfielder, 29, Arsenal
An attacking midfielder who operates mostly in central areas, Ozil broke into FC Schalke’s first team as a teenager before spending two successful years at Werder Bremen. A sequence of exciting displays for his country at the 2010 World Cup in South Africa, including a dazzling performance against Fabio Capello’s woeful England, earned him a big-money move to Real Madrid. After three years in Spain, he moved to Arsenal in 2013.

The 29-year-old is comfortable in tight areas, often doing his best work when surrounded by opponents. He is patient and guileful in possession, always aware of his teammates’ movements. As such, he is a superb attacking threat perfectly suited to Germany’s central attacking play, as their midfield looks to receive the ball in between the opposition’s defensive lines.

Often scrutinised for his lack of defensive work, Ozil (below, left) can be misunderstood. Where some players may sprint to find space, he prefers to let the game move around him. His apparent nonchalance in possession is often mistaken for a lack of desire, not least during his most recent spell with Arsenal. But don’t be fooled – he is still the chief creator of genuine goalscoring chances for both club and country.

Thomas Muller
Attacking midfielder/Forward, 28, Bayern Munich
Another Bayern Munich youth product, Muller has become a club and national team hero on the back of a string of decisive performances over a number of years. An eccentric character, he has scored more than 100 Bundesliga goals for Bayern in fewer than 300 appearances, and is fast approaching his century of international caps.

Muller is predominantly a right-sided attacking midfielder, yet he has been a goalscoring threat throughout his career and is more than capable of turning provider when necessary. His 10 goals across two World Cups – he won the Golden Boot in South Africa in 2010 – cannot be matched by any player still active in international football.

As you might expect from a man with his record, the 28-year-old has impeccable timing when latching on to through balls and crosses. He is an expert poacher, intelligently beating offside traps throughout his career, but he is far from short on defensive endeavour and is often at the heart of his team winning back possession.

Joachim Löw, 58
The man who led Germany to their first World Cup win since 1990 in Brazil four years ago had a modest career as a player, most successful as an attacker in three separate spells below the top level with SC Freiburg.

After retiring from playing, Low soon moved into coaching. A German Cup with Stuttgart in 1997 and a domestic title with the subsequently disbanded Tirol Innsbruck in Austria five years later were the chief highlights, before he became assistant to Jurgen Klinsmann’s Germany in 2004.

Together, Klinsmann and Low set about developing a more proactive, attacking approach when in possession. The fruits of their labours were clear for all to see when, in a home World Cup in 2006, Germany played some wonderful football on their way to a heartbreaking semi-final defeat to eventual champions Italy.

Low took much of the credit for the team’s tactics, and after Klinsmann’s resignation was promoted into the number-one role. The 2018 World Cup will be his sixth consecutive major tournament in charge; in the previous five, he has never failed to reach the semi finals, and has twice made finals. He lost the Euro 2008 decider to Spain, but finally achieved the seemingly inevitable when Mario Gotze’s extra-time winner against Argentina won his first and Germany’s fourth World Cup in 2014.

Germany alternated between a back four and a back three throughout qualifying and in recent friendlies. They look very strong when using a back four, but in doing so naturally have to sacrifice a man in midfield.

As they will look to continue the domination of possession that characterized their qualifying campaign, they may use a back three – especially within the group stages, against potentially less threatening opponents.

In central defence, Germany have good cover in the case of injuries or suspensions. The Bayern Munich trio of Joshua Kimmich (above, left), Mats Hummels and Jerome Boateng would be their first-choice central defensive trio, with club teammate Manuel Neuer in goal. There remain injury concerns over both Boateng and Neuer, however.

Jonas Hector and Marvin Plattenhardt are the only two predominantly left-footed defenders in the squad. Hector has been first choice throughout qualifying, and can play both as a left-back and left wing-back.

The key area to attack Germany is during attacking transitions – particularly in the wide spaces that can be left by marauding wing-backs (see above, right). If Kimmich is deployed as part of the back three, Julian Brandt would likely provide width on the right side. As Brandt is very attack-minded, access into a wide left attacker could be a suitable method of exploiting this otherwise vastly experienced and usually solid German back line. It would then be up to Germany’s defensive midfielders to block early access into the opposing wide players.

Attacking
Offensively, Germany have many different routes to goal. They prefer to build from deep with frequent short passes, looking to drag and pull the opposition out of shape. Moves with long sequences of short passes will also help them defensively; with the opponent dragged around the field, an effective counter-attack is less likely and counterpressing becomes easier for Germany.

The majority of their final-third entries will come central, with their priority to get as many players between the opponents’ midfield and defensive lines as possible. Central splitting passes often set up the majority of Germany’s attacks (see above), with quick passing combinations looking to work the ball into shooting opportunities.

Low’s side is just as lethal on the counter, capable of slicing defensive back lines open with incisive passing. Players such as Ozil, Toni Kroos, Sami Khedira and Manchester City’s Ilkay Gundogan can all finely balance the act of possession with the need to directly attack opponents.

Tactical flexibility
Germany have an abundance of talent, particularly within midfield. Their most common set-up throughout qualifying was 4-2-3-1, which enabled them to maintain large central numbers with Mesut Ozil, Toni Kroos and Sami Khedira the preferred combination (see above, left).

Ozil’s movement in particular allows the wide players to drift infield, as both Thomas Muller and Julian Draxler like to do. This does allow for the inclusion of a false nine, a role often filled by 2014 hero Mario Gotze in qualifying, but his surprise omission suggests Low will likely opt for a more traditional central striker – Timo Werner, perhaps – in Russia.

If Germany are required to attack with width and pace from midfield, Marco Reus and Julian Brandt both offer devastating speed, particularly during attacking transitions (above, centre). The inclusion of Mario Gomez means they do have a significant aerial threat should they look to attack with crosses against a congested defensive block.

Finally, Germany have occasionally gone with two central strikers during qualifying. This would allow them to adopt a central midfield diamond, which would still allow them to dominate and overload the central channel. From here, both full-backs in a back four – Kimmich and Hector – would be required to provide attacking width.