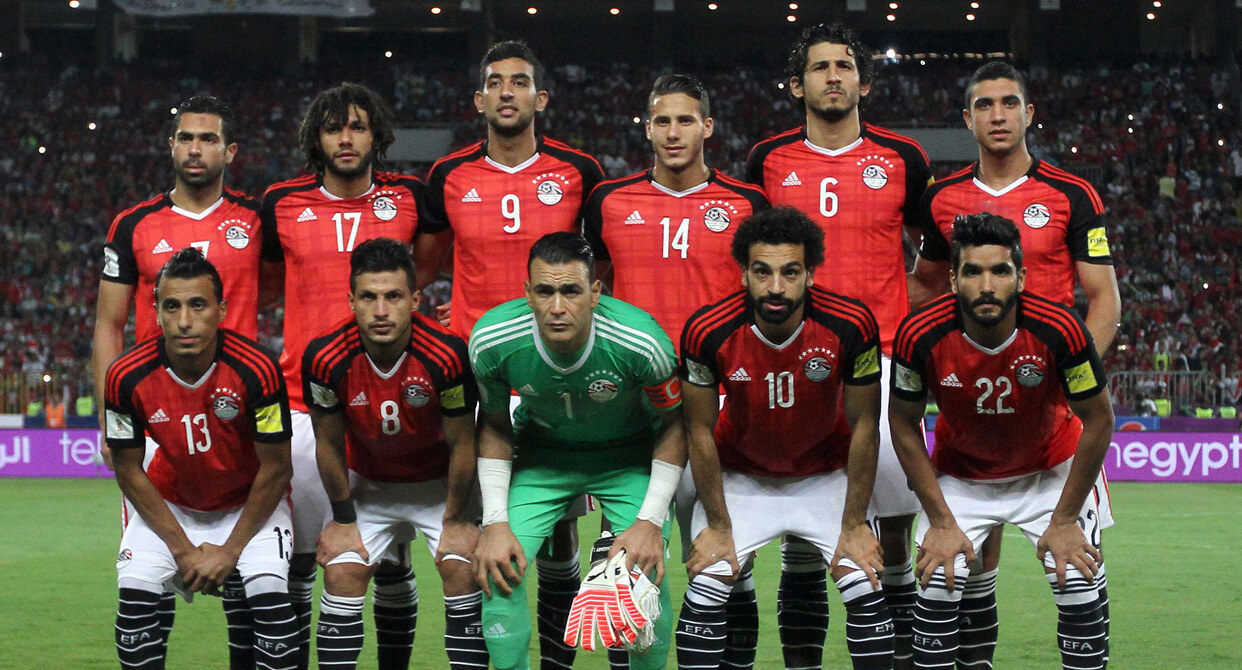 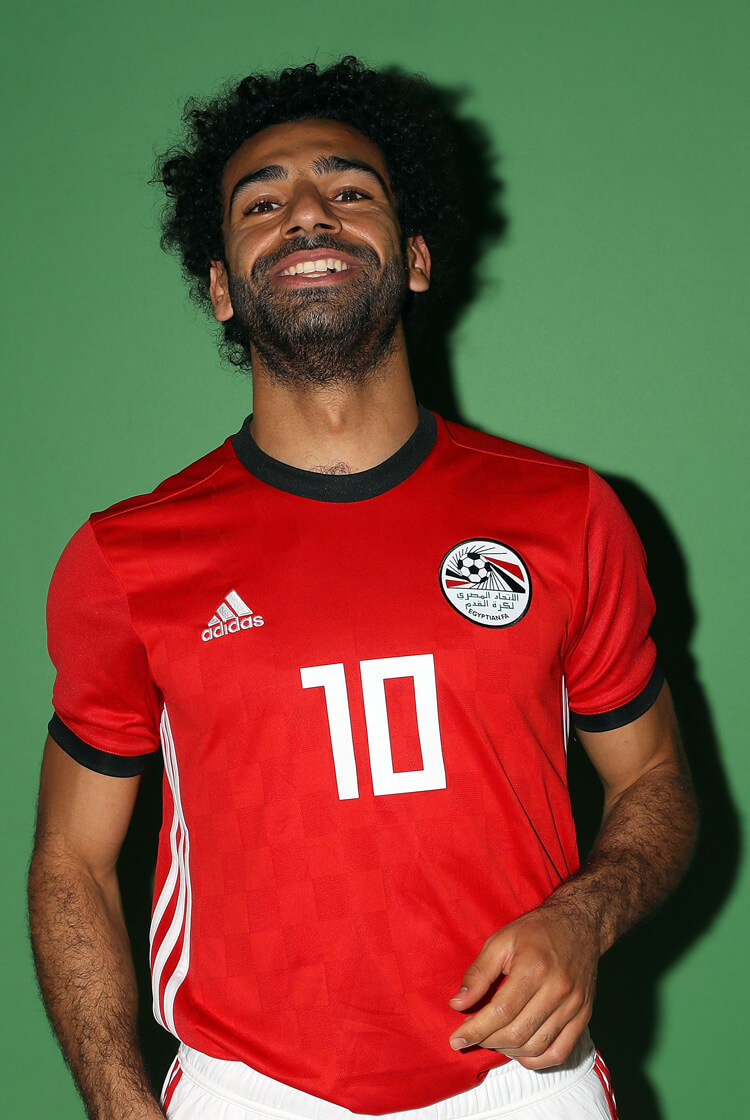 Qualifying route
The Pharaohs secured a place at the 2018 World Cup after topping Group E of the CAF qualifiers. Having seen off Chad in the second round of qualifying, the third stage saw them into a tough group alongside Ghana, Congo and Uganda.

After winning in Congo and then seeing off Ghana 2-0 at home, however, Egypt took early control of the pool. Defeat in Uganda slowed them down, but victory in the reverse fixture regained them their momentum – and a 94th-minute penalty from Liverpool’s Mo Salah to defeat Congo in their next game meant they had qualified for Russia with a game to spare. Oddly, for a team with seven Africa Cup of Nations titles to their name, this will be only their third appearance at a World Cup finals.

Egypt 2 Congo 1
The most dramatic game of the group bore witness to a remarkable final few minutes in which Egypt’s World Cup fate swung one way and then the other in front of a huge crowd in Alexandria (above). It remained goalless at half-time, but the home fans were sent into raptures when their talisman Mo Salah – as important to his country as he is to his club – latched on to a long ball over the Congo defence and delicately dinked over the onrushing keeper to score.

Those same fans were stunned into silence in the 88th minute, however, when Dijon defender Arnold Bouka Moutou popped up at the far post to tap home past a despairing Essam El-Hadary. With five minutes of added time signalled by the fourth official, however, hopes were rekindled – and the tension in the stadium hit new levels when the referee awarded the home side a penalty with just seconds remaining. Up stepped Salah to calmly slot home and send all 75,000 fans, not to mention the whole country, wild. Egypt had qualified for their first World Cup since 1990.

Trezeguet
Attacking midfielder, 23, Kasimpasa
Mahmoud Hassan, commonly known as Trezeguet, has impressed on loan in Turkey from Belgian side Anderlecht. The young winger has consistently provided both goals and assists for Kasimpasa, and provides a crucial alternativee attacking outlet to Mo Salah.

After breaking into the Al Ahly first team as a teenager, Trezeguet (above) soon moved to Europe – initially joining Anderlecht on loan, before the move was made permanent shortly after. Very much seen as a work in progress, Anderlecht themselves loaned him out internally to Mouscron, and then more recently to Kasimpasa.

The nimble left-sided attacker brings speed and skill to the Egypt attack, and should Salah be unavailable or simply marked so tightly that he’s virtually inaccessible, Trezeguet can provide the attacking spark Egypt may need to win close games. He also won the penalty against Congo that sent Egypt through to the finals, as his darting run drew a foul in the penalty area.

His work rate in defence may give Egypt some issues, as they are particularly vulnerable to crosses down their left. Trezeguet’s movement in possession will often see him in central positions, or even in behind the opponent’s back line – so his capacity for making consistent recovery runs is drastically reduced. The Egyptian following will hope that his quality in possession will nullify his absence when out of it.

Mo Salah
Forward, 26, Liverpool
The Liverpool forward has had a stellar first season on Merseyside. The little Egyptian’s goals led Liverpool to a top-four finish in the Premier League, and of course the final of the UEFA Champions League. The shoulder injury he sustained in a challenge with Real Madrid captain Sergio Ramos in that game didn’t just decrease his team’s chances of victory on the night; it also raised severe doubts about his ability to recover in time for the World Cup. He has made it, though.

Having begun his career in his native Egypt, Salah’s first European stop was at Basel. Two impressive though not prolific seasons in Switzerland earned him a move to Chelsea in the Premier League, but his failure to make any great impact at Stamford Bridge saw him loaned out to both Fiorentina and Roma in Serie A. The latter saw enough in the young Egyptian to make his move there permanent, and Salah has not looked back since.

After one very impressive season – he scored 15 goals in 31 league appearances – Salah alerted the transfer committee at Liverpool, whose subsequent swoop came as a surprise to many in England. But no one could imagine the impact he had at Anfield, scoring 44 goals in 52 games in his first season at the club and scooping pretty much every award going. He also scored almost three-quarters of all Egypt’s goals in qualifying for Russia.

In possession, Salah looks to cut inside from the right, usually driving the ball towards goal on the angle. He usually aims for the far post, often curling shots around defenders, restricting the goalkeeper’s view until the last second. When out of possession, Salah has perfectly adopted Liverpool’s counter-pressing system, constantly harrying defenders into mistakes. Egypt use a much more reserved pressing system, however, so Salah will have to expend his energy wisely, ensuring he is as fresh as possible for potentially game-changing moments with the ball at his feet.

Hector Cuper, 62
A modest former professional footballer who won three caps for Argentina in the early 1980s, Cuper moved into coaching within two years of retiring – and he has spent the 30 years since amassing a host of near misses that began with his very first job in charge of the Argentine side Huracan, as they lost a title on the very last day of the season.

A win with next club Lanus in the short-lived but still prestigious Copa Conmebol provided him with a route to a career in Europe, which started with Mallorca but reached its peak with consecutive trips to the Champions League final with Valencia in 2000 and 2001. Defeats in both, respectively to Real Madrid and then on penalties to Bayern Munich, didn’t damage his reputation, and a move to Inter soon followed. As in Argentina, however, Cuper’s side again threw away a league title on the final day of the 2001/02 season, with a shock 4-2 defeat to Lazio gifting the scudetto to Juventus.

The Argentine (above) had various subsequent managerial roles across the world before taking over as the Egyptian national head coach in 2015. Under Cuper, Egypt have had a remarkable turnaround. From failing to even qualify for the Africa Cup of Nations – a tournament they once dominated – between 2012 and 2015, they reached the final of the same tournament in 2017. They may have lost that final to Cameroon, but World Cup qualification significantly softened the blow.

Cuper’s generally defensive approach has drawn its critics over the years, but he produces well-organised and structured teams. Egypt are not easy to break down, and have a newly found mental stubbornness about them. Cuper will naturally look to the exploits of Mo Salah as much as is possible after his recent injury to create for this side, basing the majority of their attacks down their right side when he is available.

Defence
Under Cuper, Egypt are a defensively organised outfit that look to use the pace of their wide midfielders and forwards. In effect, they are a traditional counter-attacking team who entice opponents high up the pitch and then exploit the space left in behind.

Defensively, Egypt are comfortable without the ball for lengthy periods of time. They have shown that they can withstand heavy pressure from opponents, particularly under Cuper’s reign in the 2017 Africa Cup of Nations. However, as Mo Salah and Trezeguet look to drive infield in possession, this does allow teams easy access into the channels, which can leave Egypt’s full-backs exposed and give opponents the chance to send in crosses from advanced positions. From Egypt’s last 19 goals conceded, 13 have come from crosses – and 10 from their left side.

Central defenders Ali Gabr and Ahmed Hegazi (above, right) ¬– both relegated with West Brom this season – provide plenty of experience in the middle, but cutting crosses off at source is still the best way of defending against them. Likely left-back Mohamed Abdel-Shafy will have to be at his defensive best against top-quality right-wingers, although that may not be an issue in a limited Group A.

Tarek Hamed and Arsenal’s Mohamed Elneny will provide the central cover in midfield, with Egypt set up in a 4-2-3-1 structure. Elneny’s recent ankle means he won’t be a fresh as Cuper would have hoped, however.

Attack
Mo Salah and Trezeguet provide the initial attacking width in Cuper’s chosen 4-2-3-1, but the team will counter-attack from deep rather than utilise the high press Salah is used to with Liverpool.

Both wide men will look to draw their direct opponent out with them, thus creating the space into which they can drive back inside with the ball. Abdallah Said (above, right) will play as the central number 10, providing a direct passing link from Salah to Trezeguet and vice versa. It’s likely that Salah in particular will be double-marked, as teams will be more than wary of the threat he carries in possession. Therefore, Said may find himself with more central space to create and attack, as teams push a central player across to help nullify the threat of Salah on the right.

Marwan Mohsen will provide the central threat in attack, chasing down loose balls but also needing to be unselfish in his movements. It is very easy for a lone centre forward to become drawn to the ball and drop deep in order to become more involved with play, but this can make attacks more predictable – and with no central target to aim for, Egypt would also find the majority of their clearances or long balls coming back with interest.