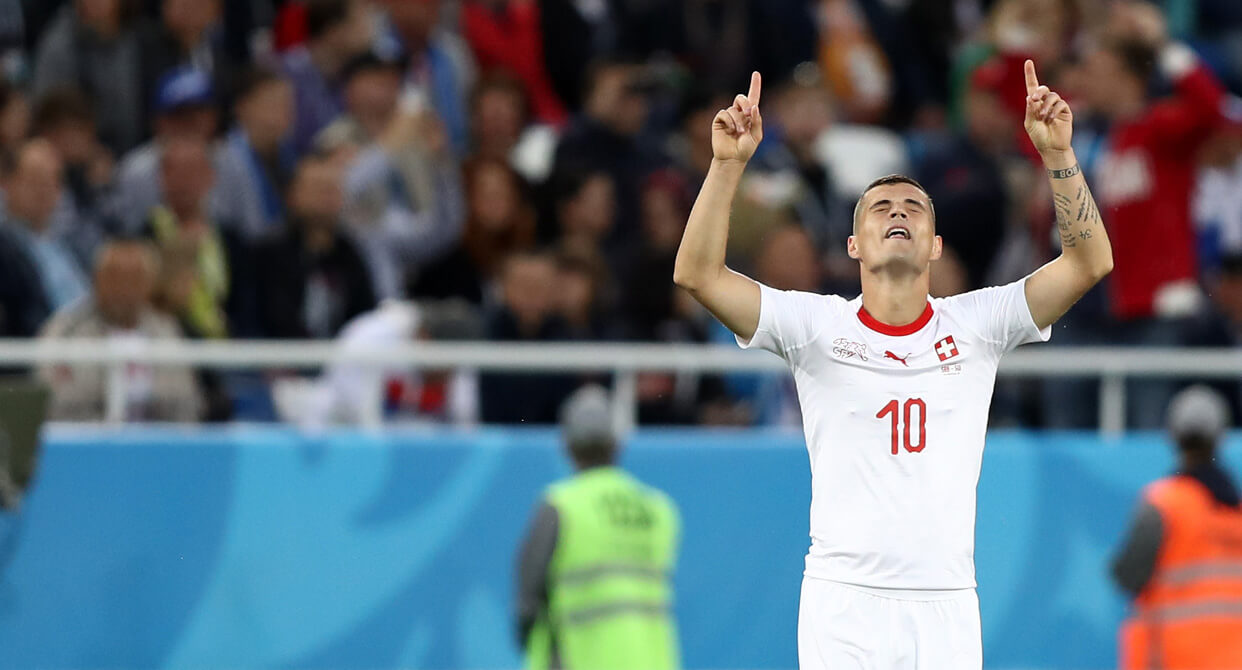 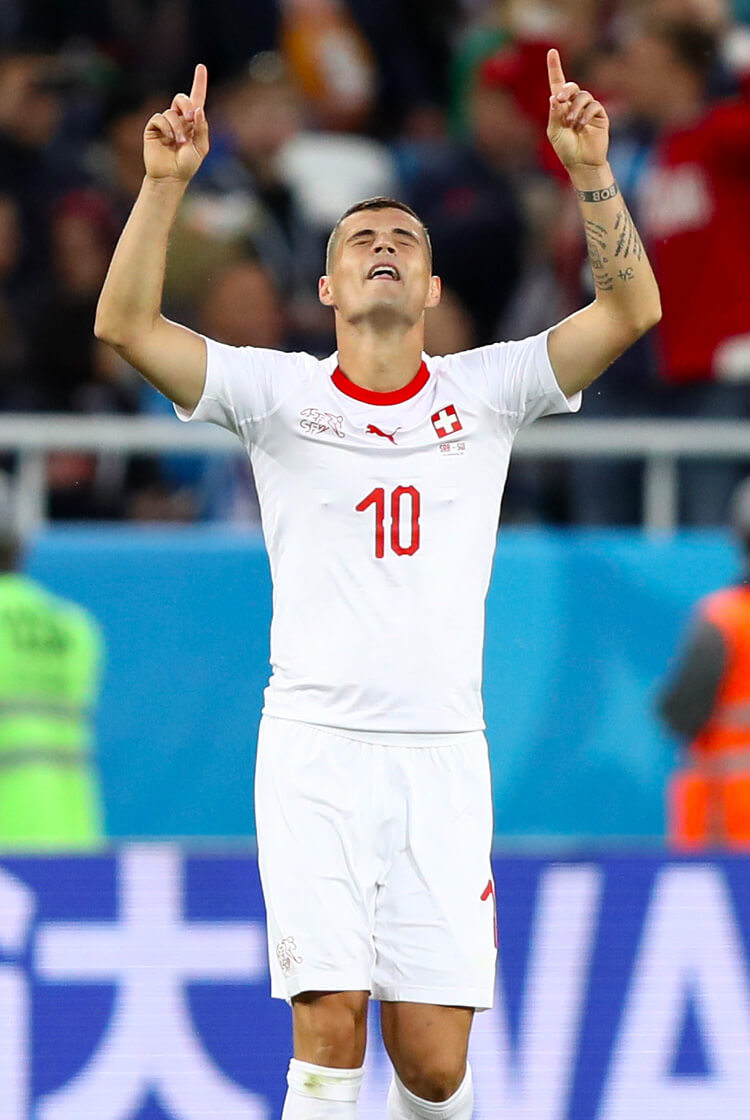 Premier League Watch
Day nine of Russia 2018 featured no fewer than 15 starters currently registered at Premier League clubs, nine of whom were spread across the Nigeria team that beat Iceland and the Serbian side that lost so unfortunately to Switzerland. Brazil, Iceland and Switzerland all boasted two each, as English-based players were all over the headlines at the end of play.

In the day’s opening clash, five-time champions Brazil again utilised Manchester City forward Gabriel Jesus as a central forward, with Chelsea’s Willian on the right. The pair struggled to have any major impact on the game, however, as Costa Rica’s defence held out until injury time before conceding twice late on. With Brazil prioritising Neymar on the left side, Willian in particular had minimal impact from the right and was subbed off at the interval.

Nigeria’s Leicester City contingent guided the Super Eagles to their first victory of the tournament, with a 2-0 victory over Iceland. Despite all of their first-half possession, Nigeria failed to register a single shot, as Everton’s Gylfi Sigurdsson – who would later blast a penalty over the bar – accurately drove set-pieces into the Nigeria box for Iceland. It was Nigeria who took all three points, though, thanks to two well-taken goals by Leicester forward Ahmed Musa (above), who has been out on loan at former club CSKA Moscow. Both goals were created by Chelsea players: one by Victor Moses and the other by on-loan defender Kenneth Omeruo.

Premier League Potential
Switzerland centre-back Manuel Akanji (above) was a solid figure within the Switzerland back line against Serbia, recovering the ball an impressive 17 times while winning eight of 10 aerial duels. The 22-year-old’s move to Borussia Dortmund in January hasn’t provided quite as much playing time as he might have wished, and a move to a Premier League team with a strong defensive edge – such as Burnley, Newcastle United or Watford – could be a viable option.

Akanji’s more familiar international teammate, Xherdan Shaqiri, put in an excellent second-half performance against Serbia. The recently relegated attacking midfielder, who has three years of Premier League experience with Stoke and is still only 26, might prove an attractive option for many mid-table sides.

European conquerors
Despite not registering a single shot on goal in the entire first half, Nigeria dominated possession against Iceland. Whatever head coach Gernot Rohr said at half-time clearly had an impact, as Nigeria took fewer than 20 seconds after the restart to create an attempt on target.

Their dominance in possession was eventually rewarded with Ahmed Musa’s two brilliant finishes, giving Nigeria their sixth victory at a World Cup finals. Interestingly, 100 per cent of those six victories have come against European opposition – a run they will be hoping to break against Argentina, who have beaten them in the group stages of a World Cup no fewer than four times.

Neymar goes third
Brazil needed more than 90 minutes to break down a stubborn Costa Rican defence, with Philippe Coutinho poking home his second goal of the tournament before Neymar added a second to open his Russia 2018 account. The 26-year-old’s 56th international goal from 87 caps takes him one ahead of Romario and out into third on his own in the all-time Brazil list. Only Pele (77) and Ronaldo (62) remain to be caught.

Neymar looked more fresh against Costa Rica than in his previous encounter against Switzerland. The PSG forward made 11 key passes and 14 dribbles from the left side, where with Coutinho and Marcelo he was a constant source of attack for Brazil. Coutinho’s 92 per cent pass accuracy – the highest of any midfielder or attacker on the pitch – ensured that Brazil carefully maintained possession high up the pitch.

Swiss comeback
Despite Switzerland only losing one of their previous 23 matches, they went behind to Serbia and Aleksandar Mitrovic – netting his 17th international goal from 39 caps – early on. The Swiss fought back in the second half, however, with Granit Xhaka and Xherdan Shaqiri both scoring at a second consecutive World Cup tournament. Their team’s come-from-behind victory was the first of the tournament in game number 26.

That Brazilian left again
With Neymar and Marcelo rampaging down the left channel for Brazil, it is no wonder that the Selecao try to work the ball over there as much as possible. Throughout the first half, though, Brazil struggled to break through the Costa Rican defence. Neymar was too wide when he received the ball, as Marcelo consequently underlapped inside the PSG forward (above). This meant Neymar’s first-half contributions were mainly passes into the penalty area, rather than shots on goal – Brazil’s talisman went throughout the entire opening 45 minutes without a single shot on goal.

In the second half, Neymar moved inside much earlier, with Marcelo now overlapping around the back to maintain attacking width (below). All of his six second-half shots came from either the central lane or the inside left channel. From here, he could also link up with Philippe Coutinho; together, the pair performed eight key passes within the width of the Costa Rican penalty area.

Mitrovic’s aerial threat
During the first half against Switzerland, Serbia targeted Aleksandar Mitrovic, looking to utilise his power and strength in the air. He won an impressive nine out of 12 aerial duels, cleverly moving away from the more dominant Swiss central defender, Manuel Akanji, and constantly looking to drop instead on to Fabian Schar. A great example of this was his goal, as Mitrovic bullied Schar to fire a bullet header past Yann Sommer.

Mitrovic’s impact fell in the second half, however, as experienced full-back Stephan Lichtsteiner moved over to double up on him with Schar. Together, the pair of defenders distracted Mitrovic, often grappling him to the floor in controversial fashion. As the Newcastle forward was just as key during the Serbian build-up as in the penalty area, he often found himself battling against not just two but three Switzerland players (above). The more the Swiss recovered the ball from these challenges, the more attacks they were able to build themselves.