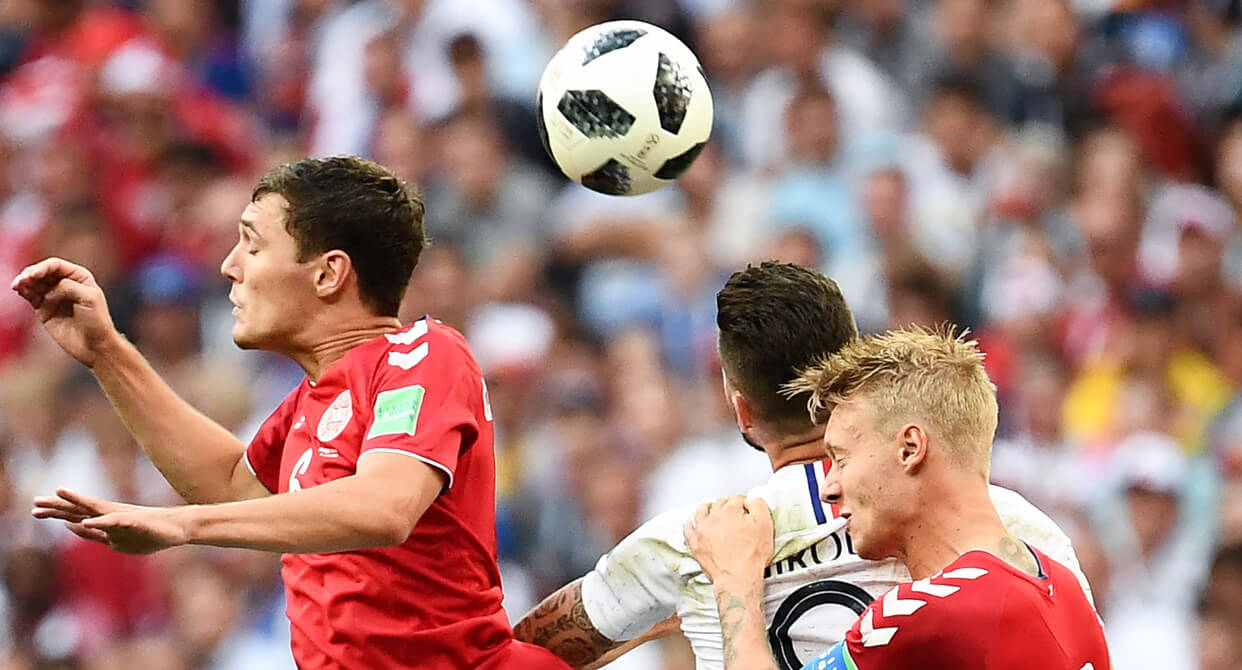 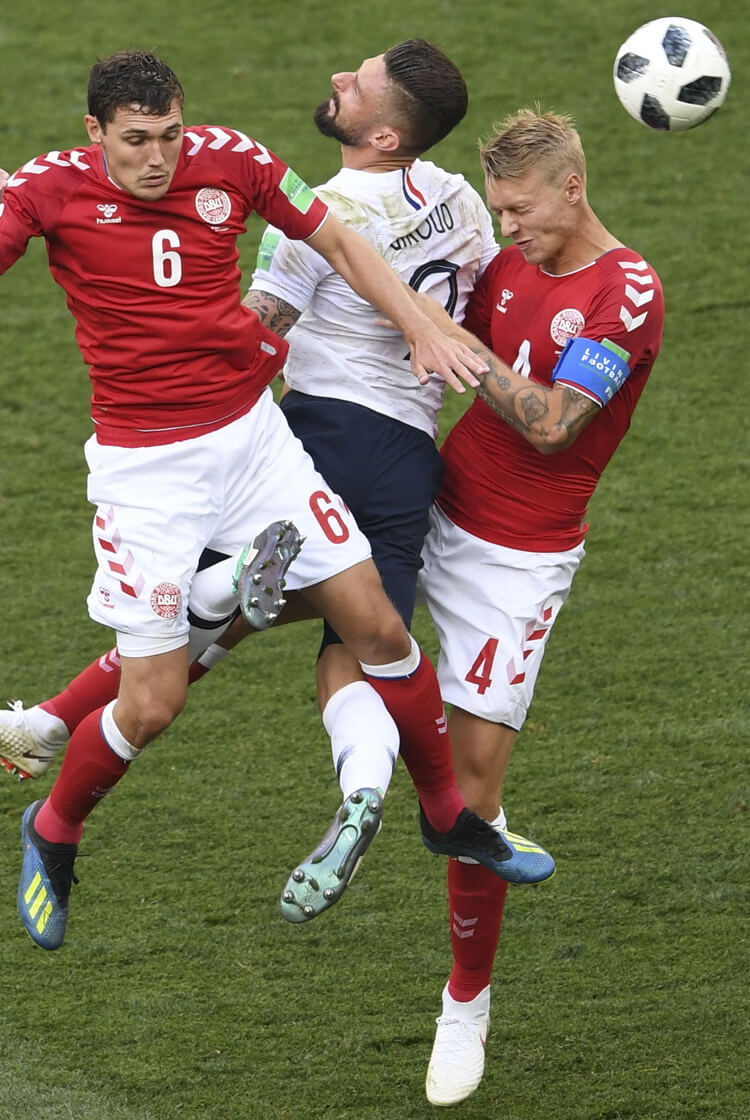 Premier League Watch
The final round of Group C matches saw eight Premier League players named in the respective starting XIs, but Chelsea’s Andreas Christensen was the pick of the bunch as he was moved from his normal position in central defence into a defensive midfield role for Denmark in their game against France. His impact was evident, particularly during a first half in which he limited the impact of his direct opponent: supposed star man Antoine Griezmann. The Dane’s relentless shadowing of Griezmann was such that the Atletico Madrid forward rarely managed to connect with Chelsea striker Olivier Giroud – more of that in our Tactics Truck section below.

In a compellingly tense final round of Group D fixtures, meanwhile, Manchester United defender Marcos Rojo stole the headlines with the astonishing 86th-minute volley that sent Argentina through to the knockout stages at the expense of Nigeria. But Rojo also proved his worth at the other end of the pitch on his recall to the starting XI, making 11 ball recoveries and winning nine aerial duels – the highest figures from either side. Rojo’s central defensive partner, Manchester City’s Nicolas Otamendi, also made up for Argentina’s shortcomings in midfield with 10 ball recoveries and a 100 per cent record from five aerial duels.

In the other Group D game, Cardiff’s Aron Gunnarsson, Johann Berg Gudmundsson of Burnley and Everton midfielder Gylfi Sigurdsson, who managed 11 key passes, could not help Iceland stop the Croatian winning machine. Despite matching the group winners for the majority of the game – and drawing level through Sigurdsson’s well-hit penalty – the smallest nation at the finals fell to Ivan Perisic’s late winner and joined Nigeria on the plane home.

Premier League Potential
The South American duo of Christian Cueva (above) and Cristian Pavon both impressed with their ability to drive and run at opposing defenders. Cueva’s agility and quick turn of direction was highly impressive, as he repeatedly evaded current and former Premier League midfielders Aaron Mooy and Mile Jedinak in Peru’s final-game win over Australia. Cueva’s direct play on the inside-left channel enabled his side to counter-attack at speed; each of his three key passes in the final third created chances for the Peru front line.

Despite only coming on for the final 30 minutes, the impact of Pavon on Argentina’s shape was noticeable and immediate. With Lionel Messi’s impact in the wide right channel limited by an incredible defensive overload on his first touch, the introduction of Pavon enabled Argentina to move Messi into the middle and yet still maintain attacking width on the right. Both Pavon and Cueva could be ideally suited to a team such as Bournemouth or even Everton, as they can both drive inside and combine, or play outside and create from wider positions.

A brief final mention to Oghenekaro Etebo, who impressed both with and without the ball in the Nigerian midfield. Despite recently joining Stoke City, the 22-year-old will be kept on the radar of many Premier League teams – particularly if Stoke fail to return to the top flight at the first time of asking under new manager Gary Rowett.

Socceroos sterile, Peru powerless
Both Australia and Peru would have fancied their chances of qualifying from Group C when the groups were confirmed back in December. However, a clear lack of attacking talent stifled both sides’ progress within the tournament – both managed only two goals from respective shot totals of 31 and 32.

Australia’s main issue was a lack of shots on target, with less than a quarter of their total attempts failing to test the opposition goalkeeper. Peru worked the stoppers harder, with 35 per cent of their efforts on target – but they too often lacked punch or menace, as a distinct lack of quality in the final third proved their downfall. It took them 29 shots before they eventually opened their World Cup account, ironically against Australia – whose two goals in Russia both came from the penalty spot.

Group of (bored to) death
It took no fewer than 37 games – the longest wait in World Cup history – for Russia 2018 to witness its first 0-0 draw, as France and Denmark played out an uninspiring contest in Moscow. It shouldn’t have come as a surprise that it happened in Group C, either, as this was the section most lacking in attacking intent throughout the opening stages.

The three group games with the fewest attempted shots all came from Group C, as Denmark’s clash with France only drew 15 total attempts. On the same day, Australia’s final match against Peru only saw 18, as did the group opener between France and Australia. Surely both qualifiers, France and Denmark, will need to do more if they are to get past respective opponents Argentina and Croatia in the last 16.

Forza Croatia
For the first time in Croatia’s World Cup history, they have won three successive matches. They deservedly topped Group D, beating Nigeria, Argentina and Iceland while conceding only one goal – and that a penalty – along the way.

With five different scorers, Croatia’s attack has fantastic variety. Their goals have stemmed from a mixture of sources, too, with one penalty, one from a corner, two volleys, two close-range finishes and one long-range effort outside the penalty area.

From 10 total shots on target, seven have returned goals, as a dangerous front line continues to punish mistakes and carve open defences. Milan Badelj’s goal against Iceland was his first shot on target, showing that Croatia have attacking strength in depth that could prove decisive later in the tournament.

Griezmann stalked
The French attacking pair of Olivier Giroud and Antoine Griezmann lacked potency against Denmark, as they struggled to create anything resembling an effective attack. Together, the pair lost possession 20 times, as Griezmann was eventually replaced midway through the second half. Nine of these 20 losses came in the central lane of the pitch, as the duo struggled to break free of a strong central presence from Denmark. The pair’s passing accuracy was also the lowest within the entire French team – substitutes included – while they recovered only two balls between them. They lacked threat with the ball, and lacked impact without it.

The main architect of this defensive destruction was converted defensive midfielder Andreas Christensen. Wherever Griezmann moved, Christensen followed. The tall Dane blocked passing access into Griezmann’s feet during French transitions (above), which forced the French forward to look to wider positions in a bid to get on the ball. Yet again Christensen followed (below), and he was superb when defending one on one against Griezmann, who failed to dribble past the Chelsea defender anywhere in the Danish half. Christensen’s eight ball recoveries was the joint-highest figure in the match, as he put in a dominant defensive-midfield display.

Messi central
Until the introduction of Cristian Pavon in the 62nd minute, Argentina couldn’t quite utilise the full effect of Lionel Messi’s dribbling prowess. Throughout the first half, Messi was mainly occupying the space along the wide right channel, as Nigeria swamped the Barcelona star each time he received the ball. His wonderfully taken first goal, however, latching on to a superb Ever Banega pass and driving right-footed beyond the goalkeeper, was a prime example of his capabilities when used in the central lane.

Despite this, Messi continued to receive on the right side, where he was expertly contained and shepherded towards the touchline. Once Cristian Pavon was introduced to the right side, Messi could then move into the inside channel or the central lane itself (above). With Pavon drawing away the Nigerian left wing-back, Messi had fewer surrounding defenders and thus more space to attack. He lost possession nine times with combined dribbles and passes along the right side, but only once when in the central lane. If Argentina are to progress in Russia, deploying Messi centrally may well be key.