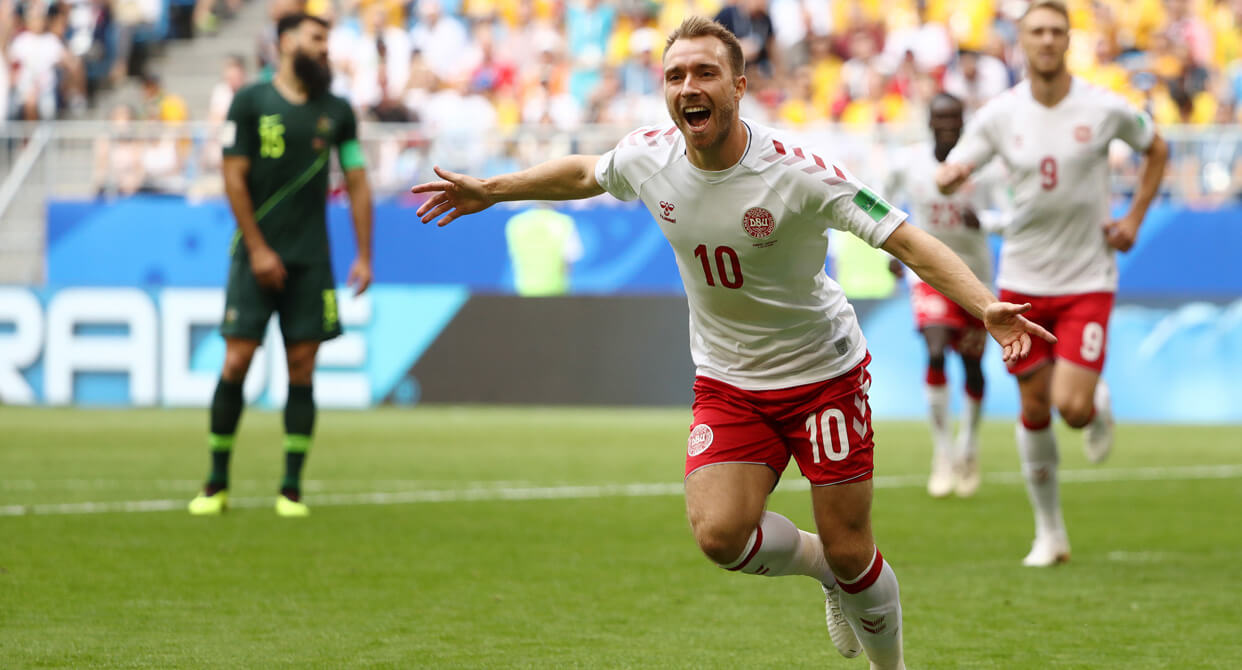 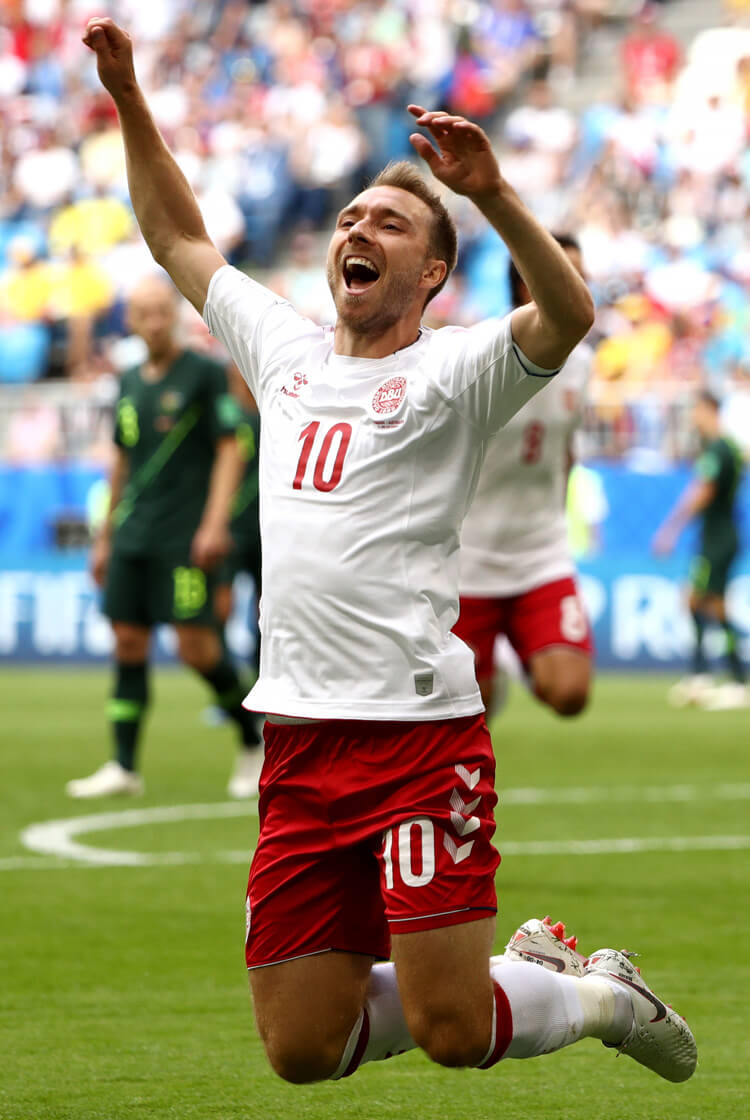 Premier League Watch
Denmark may not have got the victory they needed against Australia to qualify with a game to spare, but Tottenham Hotspur playmaker Christian Eriksen was instrumental to his team’s display. Although the Danes looked for the direct pass from Simon Kjaer to Nicolai Jorgensen plenty often enough, everything that went through their midfield came from Eriksen – whether that was high-quality crosses into the box, clever link-up play with Jorgensen or, of course, a well-struck finish for the game’s opening goal.

Behind Eriksen, Leicester City goalkeeper Kasper Schmeichel dealt well with almost everything Australia threw at him, notably making a string of saves in the closing minutes. He dived the wrong way for the equalising penalty, however, which was a second in as many games for Aston Villa midfielder Mile Jedinak.

France secured their spot in the last 16 with a 1-0 win over Peru. On the day he won his 100th international cap, Tottenham goalkeeper Hugo Lloris had only one meaningful save to make, from Peru captain Paolo Guerrero in the first half. Manchester United’s Paul Pogba and Chelsea man N’Golo Kante built on their encouraging starts against Australia; the former played some excellent penetrative passes beyond the back line for Antoine Griezmann and Kylian Mbappe, while the latter proved typically hard to beat and broke up plenty of Peruvian attacks.

Ahead of them, Kante’s Chelsea teammate Olivier Giroud looked like he may be France’s missing piece. Didier Deschamps’ men looked much more of a threat with Giroud as a focal point than they did against Australia; his hold-up play and runs into the channels to link up with both Griezmann and Mbappe were difficult for Peru to deal with.

Later on Thursday evening, two English-based centre-backs experienced very different games. Nicolas Otamendi may have been given absolutely no help at all by his midfield (see Tactics Truck below) as Croatia ran riot against Argentina, particularly for a superb second goal scored by Luka Modric, but the Manchester City defender won only 50 per cent of his challenges and an even worse 38 per cent of his aerial challenges.

At the opposite end of the pitch, Liverpool’s Dejan Lovren continued the strong form with which he finished the domestic season, repeatedly getting the better of Manchester City’s Sergio Aguero and later Gonzalo Higuain. The Croatia centre-back’s desire to recover and restrict the angle of a potential shot – he was beaten by a pass or dribble only twice all night – made it a difficult afternoon for the Argentina forwards.

Premier League Potential
Alongside Lovren at the heart of the Croatian defence, Besiktas centre-back Domagoj Vida (above, left) put in another excellent display against, supposedly, one of the most fearsome attacks in Russia. A strong defender who looks like he really loves to defend, the 29-year-old would be a good fit for any Premier League side looking to add quality in their defensive line: Watford, Bournemouth or Southampton stand out as potential destinations, with that in mind.

Foot loose
Argentina goalkeeper Willy Caballero’s pass completion of 75 per cent was by some distance the lowest of the six keepers in action on day eight. The Chelsea stopper never really looked comfortable with the ball at his feet against Croatia, and it was his disastrously underhit pass that led to Ante Rebic’s opener in Nizhny Novgorod.

Recovery man
N’Golo Kante made no fewer than 15 ball recoveries in France’s victory over Peru – more than double that of anyone in his own team and five more than his Peruvian counterpart Miguel Trauco. Kante’s role was crucial in limiting France’s opponents to just two shots on target.

Zero return
Peru have had 28 shots without scoring in their first two games at this tournament. The entertaining South American side have been knocked out following consecutive 1-0 defeats against Denmark and France. Of these 28 attempts, only eight have been on target; the other 20, including a missed penalty against Denmark, failed to trouble the opposition goalkeeper.

Argentina’s recovery ‘runs’
In their defeat to Croatia, the Argentina midfielders were notable for their staggering lack of desire to recover after losing possession. It was evident in stoppage time, as Ivan Rakitic scored Croatia’s third, but perhaps more importantly for the game-securing second 10 minutes earlier. In the first image (above), we can see where the Argentina midfielders and eventual goalscorer Luka Modric were when Rakitic first regained possession. In the second image (below), we can then see the time and space that Modric had just before receiving the ball. Nicolas Otamendi came out to try and delay the shot – but, with no help arriving from the midfield, Modric was able to shift the ball on to his right and whip it past a despairing Willy Caballero.

The Olivier effect
The introduction of Olivier Giroud from the start for France made a huge difference to the quality and variety of their attacking play against Peru. With the Chelsea striker leading the line, supported by Antoine Griezmann and Kylian Mbappe, France could be considered serious contenders in Russia.

What the deployment of Giroud achieved for France can be seen both in the types of passes they were playing into him and the runs that he was making. With Mbappe and Griezmann on the pitch, the ball in behind is always a real threat; however, when there is limited space in behind, the hold-up play of Giroud allows him to win aerial balls and bring others into the game further up the pitch.

Giroud is also a willing runner and will make diagonal movements into the channels, freeing up space centrally for Mbappe or Griezmann to run beyond him and into in order to receive a flick on from the big striker (above). It was through one of these runs that France scored their goal, with Giroud receiving the ball in behind the channel, allowing Mbappe to get in centrally and finish well.