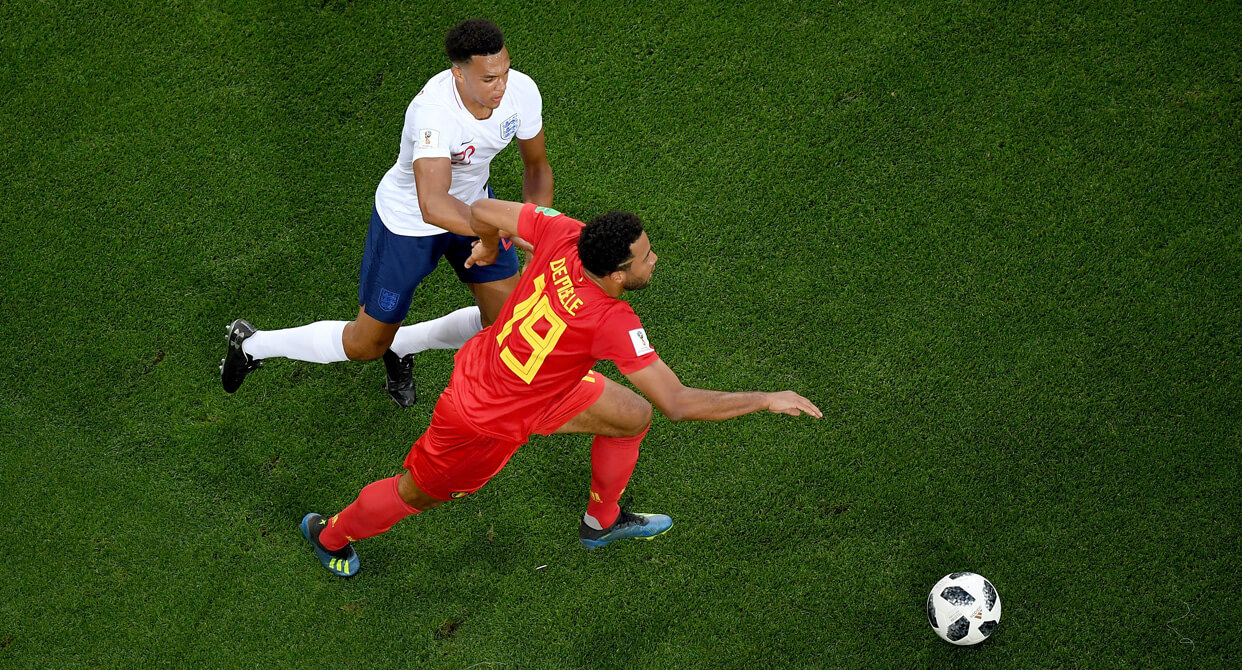 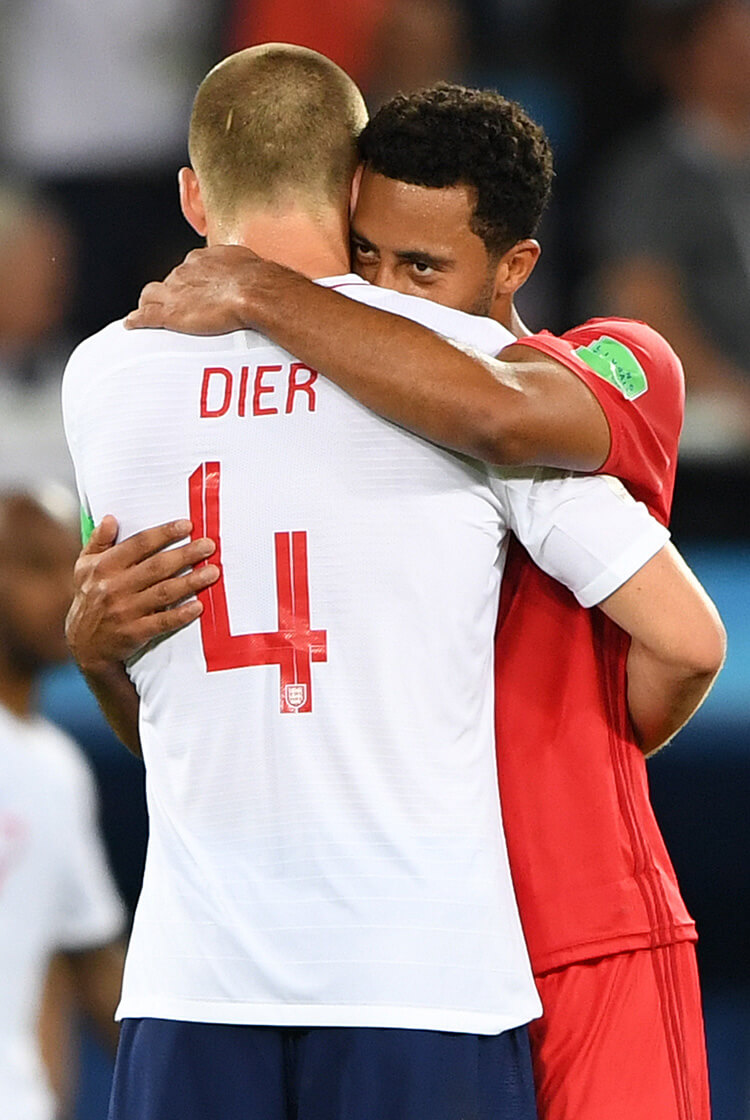 Premier League Watch
In a tense final round of Group H fixtures, three of the four teams were still optimistic about qualifying for the round of 16. West Ham’s Cheikhou Kouyate made his first start of the tournament for Senegal, paired with Everton’s Idrissa Gueye in central midfield. Club rival Sadio Mane was moved into a central forward role, as Senegal were far more proactive in attack than the surprisingly conservative Colombia.

Colombia continued with Arsenal goalkeeper David Ospina – their most capped keeper ever – between the sticks, while Tottenham defender Davinson Sanchez put in a solid performance that included one crucial last-ditch tackle on Mane.

A less anxious Group G rounded off the group-stage action. With both England and Belgium through, two heavily changes sides meandered towards an uninspiring 1-0 victory for Belgium. The Red Devils had four Premier League starters, with Marouane Fellaini, Michy Batshuayi and Mousa Dembele all starting their first World Cup 2018 match, with Dembele in particular impressing with his strength and guile in possession. Goalkeeper Thibaut Courtois remained in goal – keeping his second clean sheet of the tournament – as Vincent Kompany was later introduced for a brief second-half cameo.

Premier League Potential
We’ve already identified the abilities of one Senegal centre-back in Kalidou Koulibaly, but his partner at the heart of the defence – Salif Sane – has also impressed in Russia. The 27-year-old (above), currently with Hannover 96 in Germany, won 100 per cent of his tackles in the 1-0 defeat by Colombia, and recovered no fewer than 12 balls – second only to Idrissa Gueye on the day. He was also the only player in the Senegal defence not to give away any fouls, operating with a composure that could serve him well against Premier League attacks.

Youri Tielemans also impressed in the Belgium midfield against England, driving forwards in both central and inside-right channels. The Monaco midfielder made the most of his first World Cup 2018 start, with the highest number of key passes in the whole Belgium team. He also helped link defence and midfield, as and when Courtois began with a short build from deeper areas. His final ball in the attacking third perhaps lacked consistency, but the 21-year-old has plenty of time to hone this particular attribute. Predominantly a central or defensive midfielder, Tielemans would be ideally suited to a team that keeps possession. Arsenal, a new-look Everton under Marco Silva or even Tottenham – where he would link up with countrymen Dembele, Jan Vertonghen and Toby Alderweireld – would seem potential destinations.

Raining goals
Thanks to Jose Luis Rodriguez’s deflected effort against Tunisia, Panama scored their second World Cup goal to follow up on their strike against England four days earlier. This not only gave Panama a lead – another World Cup first for the Central American debutants – but it also confirmed that, for the first time ever, all 32 teams at Russia 2018 had scored at least two goals.

Despite many teams choosing to deploy a defensive low-block strategy, attackers have eventually prevailed, with 122 goals scored in the group stages. This is actually 14 goals behind the number scored at the same stage in Brazil 2014, but there has only been one 0-0 draw so far – proving that the defensive low block is more than beatable.

Fair play?
Japan conceded the fewest fouls in Group H, and having picked up fewer yellow cards than Senegal they became the first ever team to qualify for the World Cup knockout stages courtesy of FIFA’s new fair play ruling. However, Japan’s controversial strategy during the final 15 minutes of their match against Poland left a potential stain on an otherwise wonderfully exciting group stage.

Although Japan managed to work 94 passes in the final 15 minutes of the match, they only attempted two in Poland’s defensive third. In contrast, during the previous 75 minutes, they attempted a total of 81. This farcical approach was matched by Poland, who were also seemingly happy to see the game out, with no attempts to either play or entertain. Of Poland’s 21 total tackles, they only attempted one in the entire final 15 minutes, happy to leave Japan untouched as the game died out in a whirl of meaningless midfield possession.

Majestic Mousa
With England seemingly short of quality central-midfield options, the fact that Belgium have Mousa Dembele in reserve, unable to break into their starting XI, is hard to take. The Tottenham midfielder displayed his range of qualities against a much weakened England side on Thursday.

Dembele was superb in possession, using his strength and power to protect the ball when no passing options were available. He recorded zero ball loses throughout the entire 90 minutes, and recovered five balls back – the highest of either side’s midfield units.

England’s Danny Rose was the only player to perform more tackles than Dembele – who, amazingly, finished with a 100 per cent pass accuracy from his forward passing. Majestic in possession and tough when defending, Dembele is the ideal central midfielder who would walk into England’s team, no questions asked.

Rodriguez removed
James Rodriguez was forced off after half an hour of Colombia’s victory over Senegal, having looked uncomfortable throughout his 30-minute stint. With zero key passes or shots, and only one dribble – in which he lost possession – a second game in four days may have been too much for a player who has had more than his share of injury problems.

Despite starting on the left of the Colombian midfield, the Real Madrid midfielder often drifted into a central position, accompanying the dangerous Juan Quintero as effectively two attacking number 10s.

Without Rodriguez, Colombia’s central attacking play is limited. Lone forward Radamel Falcao can become isolated (above), with former Chelsea winger Juan Cuadrado taking more of the attacking weight and ownership from the right side, which eventually results in Cuadrado trying to do too much. Rodriguez’s likely replacement against England, Luis Muriel, will offer fewer inside movements, but will provide more attacking width on the left in similar fashion to Cuadrado on the right.

Should Colombia utilise a channel-focused approach, exploiting the outside of England’s central defensive back three will be their priority – particular on the attacking transition, with Cuadrado against Harry Maguire a potentially match-deciding battle.

Dreary Dier
After England’s defeat to Belgium, it looks like Jordan Henderson’s position at the heart of the England central midfield is secured for another game at least. Starting rival Eric Dier, although comfortable in possession, lacked quality and in particular forward play, as the Tottenham midfielder and England captain for the evening looked oddly sluggish through the game. Perhaps due to a lack of proactive body shape when receiving (above), Dier’s passing failed to propel England forward as much as it should have.

With Marcus Rashford dropping short and away from the Belgium back line, Dier regularly had an active passing lane into Rashford’s feet. Additionally, Fabian Delph and Ruben Loftus-Cheek found spaces ahead of Dier, looking to receive within the inside channel and attack the Belgian back line. Dier rarely found any of these options, regularly choosing to bounce the ball back into his central defensive trio.

If he is looking to cement a starting position both in this World Cup and beyond, then Dier will need to edit his body shape when receiving, in order to open up the pitch and play forward, thus increasing the frequency of England’s attacking plays.