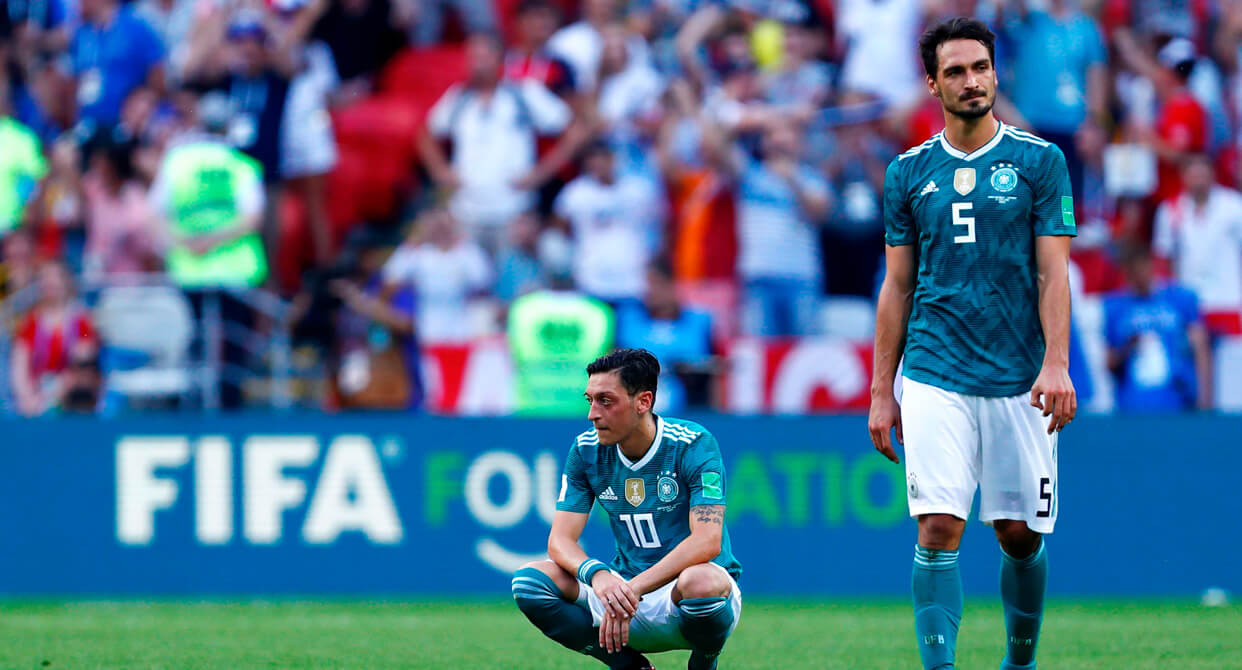 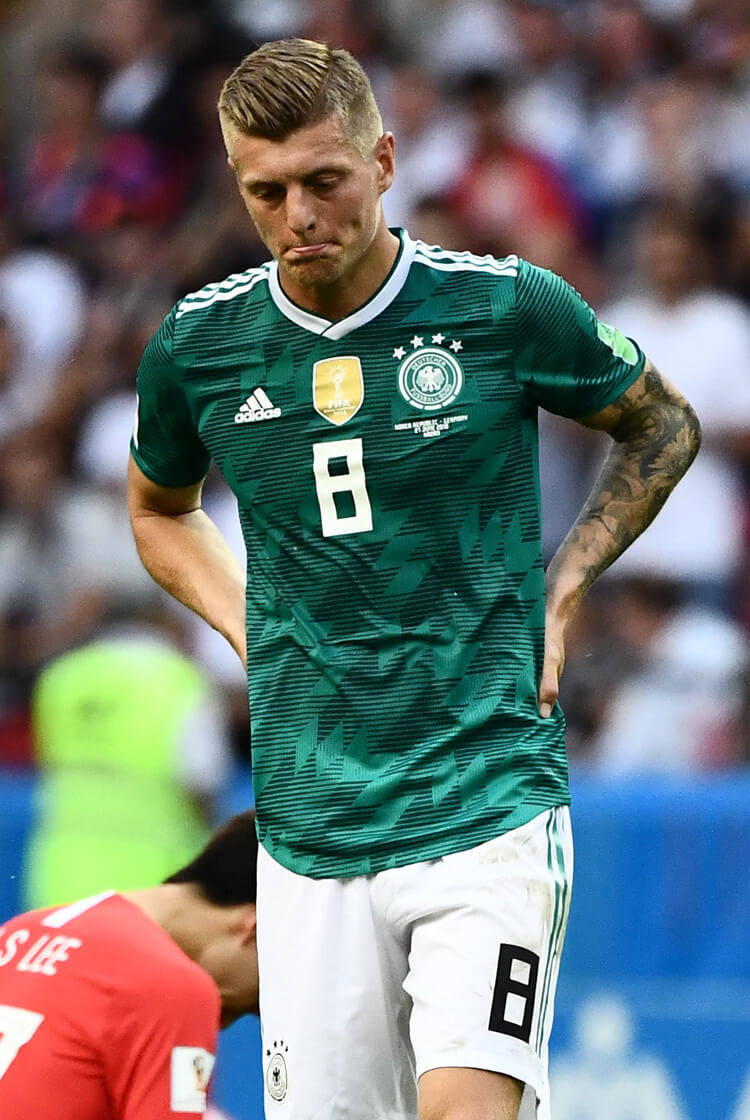 Why did Germany crash out in the group stage?

1. Awful shot conversion
In their three group games at the 2018 World Cup, defending champions Germany had no fewer than 72 shots. They scored twice – and one of those was a direct free-kick from Toni Kroos.

Germany’s incompetence in front of goal was clear for all to see, with perhaps too large a responsibility placed on Timo Werner. The centre forward has managed 21 goals in each of his past two seasons for RB Leipzig, but didn’t manage to find the net once in Russia. Head coach Joachim Low’s evident uncertainty around his use of the squad’s other attackers – Thomas Muller, Marco Reus, Mesut Ozil, Julian Draxler, Julian Brandt, Leon Goretzka and target man Mario Gomez – inevitably led to inconsistency and at times plain confusion, making it difficult for the side to gather any sort of momentum.

2. What if?
It is no secret that three of the four goals Germany conceded in Russia came on the counter-attack. A lack of protection in front of the back four, and a lack of recognition from the defence of the threats posed by the opponents, led to the goals conceded. The goal they gave away in the defeat to Mexico came because there was no front screen of Javier Hernandez (above) meaning he was able to receive the ball to feet, attract the defender to him and set it forward for Hirving Lozano to receive beyond.

The goal scored by Sweden came from a lack of recognition of a threat on the German left just before the turnover, where Jerome Boateng was potentially outnumbered. One of Germany’s major issues across the three games was poor anticipation and positioning. Take the situation below, from the Sweden match. Possession has just been turned over and there is a real threat on their left side, with the centre-back being drawn out to one attacker, leaving room in behind for another. No one in midfield or across the rest of the defence looks to be aware or have planned for this, however.

The second goal against South Korea came on the counter, because Manuel Neuer took it upon himself to play in the final third and by then the German defenders were neither aware nor much bothered about Son Heung-min’s presence as they were focused only on trying to score. The blame lies with the central midfielders and the back four in this area: poor awareness and anticipation, poor positioning and a lack of thought as to what happens if they lose the ball. This must always be a fundamental thought for a defender when his team are in possession.

3. The Leroy Sane decision
When Low decided to leave Manchester City rising star Leroy Sane out, it was always going to be a risk. If Germany had succeeded in Russia, then the omission would have been soon forgotten; however, with such a glaring lack of pace and quality in front of goal, it now seems absurd that Low would have left out a player who had such a fantastic season in terms of both creating and scoring in the Premier League.

Put bluntly, Germany clearly lacked a player with the 22-year-old’s skill set. Chances came about mostly through combination play; it was rare to see a Germany player run at and beat an opponent, which is a talent Sane has in abundance. Given the amount of possession Germany had, a great way of drawing players out of position in a low block is to run at them and take them on – when one is beaten, then another one (or more) has to come across and press the man on the ball, creating more space elsewhere. If you do not have a player who can do this, then you limit your options against teams set up to defend. In hindsight, it seems that Sane’s inclusion could have made a difference to Germany’s fortunes.

Premier League Watch
In the end, Brazil moved serenely into the last 16 at the expense of Serbia, but Manchester City forward Gabriel Jesus (below) continues to seek his first goal of the tournament. He is struggling to make an impact and is even at times looking a little lost in the formation – almost as if he’s getting in the way of Neymar and Philippe Coutinho. There have been occasional flashes of quality, but Jesus hasn’t got going yet and has Liverpool’s Roberto Firmino breathing down his neck for a starting place.

A number of Premier League players were packing for home as a result of Serbia’s defeat. Manchester United midfielder Nemanja Matic worked hard to stop Coutinho in particular inhabiting dangerous positions in between the lines, while Newcastle forward Aleksandar Mitrovic again showed what a handful he can be with a powerful display as the lone striker – although when the chances came, and they did, he was crucially unable to take them. Teammate Dusan Tadic, who linked up well with Mitrovic without setting the tournament alight, left the Premier League the same day he left the World Cup – he has signed for Ajax and leaves Southampton wondering what might have been. Arsenal midfielder Granit Xhaka had a mixed time in Switzerland’s 2-2 draw with Costa Rica, gifting already-eliminated opponents a couple of early chances but starting the move that led to his country’s second on the night.

In a dramatic finale to Group F that no one saw, Xhaka’s club teammate Mesut Ozil was recalled to the starting line-up for a Germany side that, as we have covered above, crashed out in ignominious fashion. Ozil started out on the left, but drifted into a more central role as the game progressed. He was their main creative threat and they did look better when he was on the ball, holding his position outside the box and looking to thread passes through or float crosses in. Germany may have failed as a team, but Ozil was one of their better players on the day – he created enough opportunities for his teammates to get the job done.

Tottenham attacker Son Heung-min was the beneficiary of Germany’s kamikaze late approach, slotting home South Korea’s second into an empty net with Manuel Neuer in another parish. Korea’s historic win over the defending champions gave them something to take home with them, but in the group’s other fixture there are Premier League players hanging around for a while yet. A Sweden team featuring Manchester United defender Victor Lindelof are growing in stature as the tournament goes on, with their 3-0 win over Javier Hernandez and Mexico sending the Central American side into a last-16 tie with Brazil.

Long time coming
It is 80 years since Germany were last knocked out of the World Cup in the first round. Since the 1938 tournament in France, where they were dumped out on penalties by Switzerland, the Germans have won four World Cups, played in eight finals and only four times failed to make at least the semi finals. In fact, this is the first World Cup in history in which England’s involvement in the tournament has outlasted Germany’s.

Who needs the ball?
South Korea ‘enjoyed’ a distinctly limited 26 per cent possession in their shock 2-0 victory over Germany. The Koreans had to face 28 shots against them, but the strength of their defensive structure meant that only six of these were on target, with 13 off target and nine blocked. The team also made 42 clearances – more than any of the eight teams to play on the day – and maintained outstanding discipline and organisation to keep the world champions at bay. It’s not about how much possession you have; it’s what you do with it that counts.

Dangerless
From 20 shots on goal in their 3-0 defeat to Sweden, Mexico managed only three on target. That’s a worryingly low 15 per cent, and two of those three on target were from outside the area – suggesting they were not creating clear-cut chances in the most dangerous areas and struggling to break Sweden down. Only six of their 20 shots were taken inside the penalty area, which is frankly not good enough. Javier Hernandez, Hirving Lozano and co will need to be much more creative against a Brazil side that may give them more space in which to create.