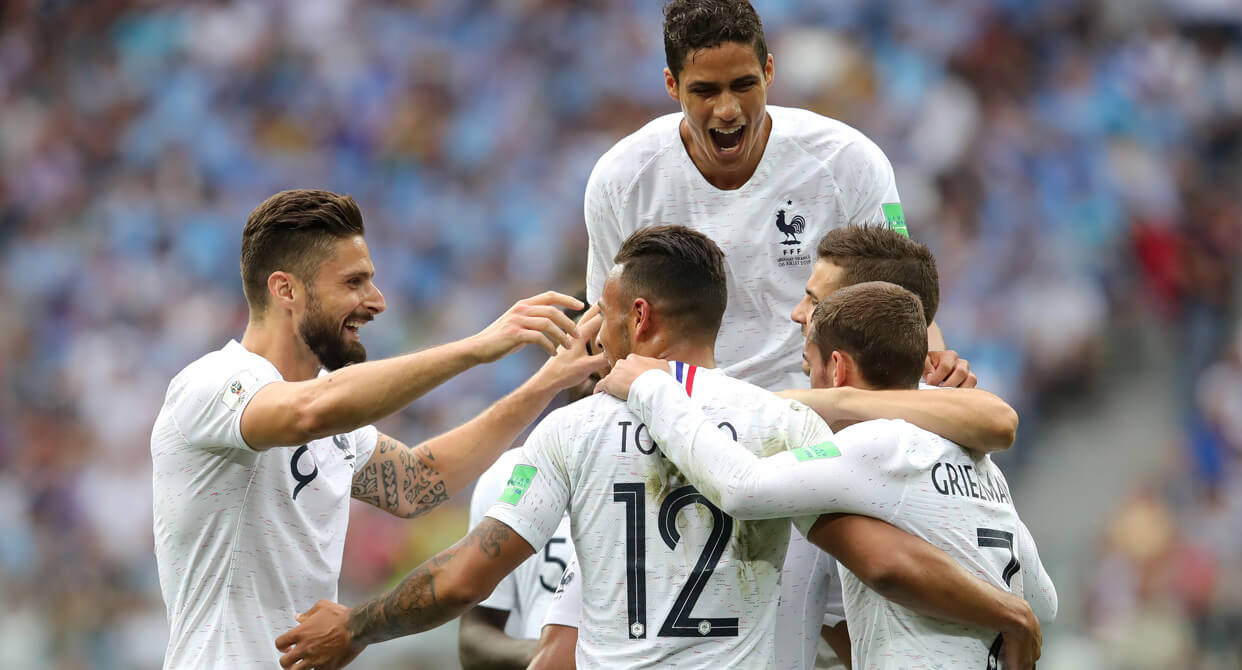 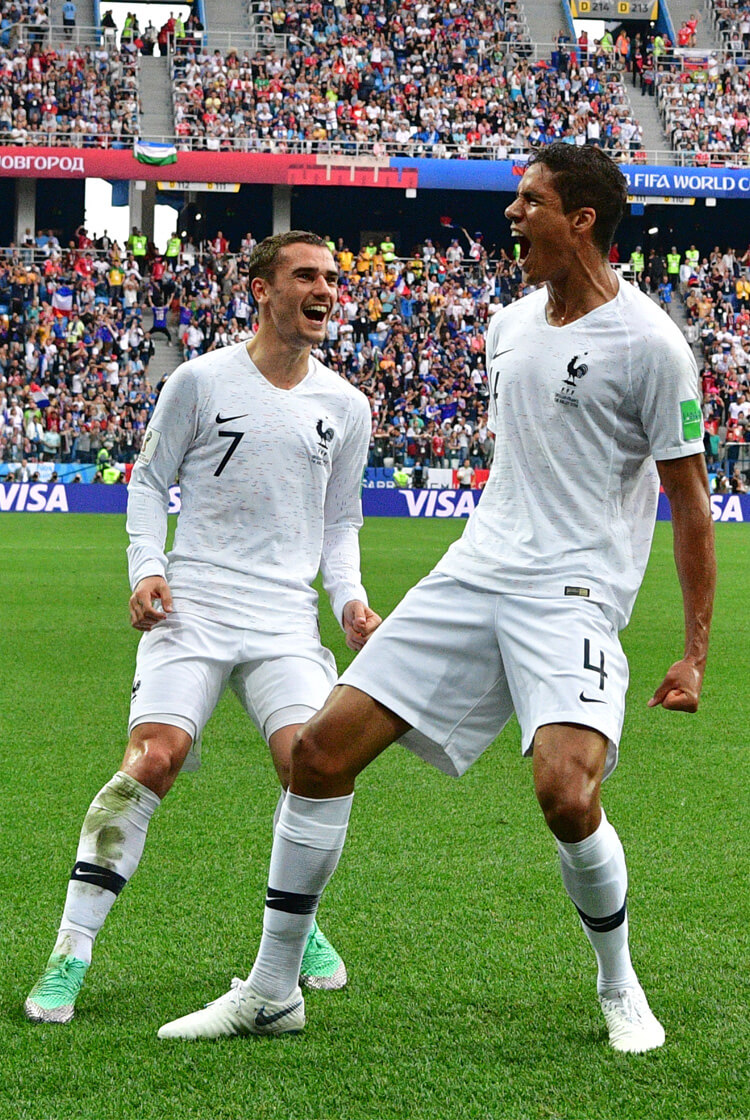 France have slowly but surely moved through the gears at this summer’s tournament in Russia, with their victory over Uruguay securing their spot in a first World Cup semi final since 2006. Didier Deschamps has come in for criticism over his supposedly conservative tactics over the past month, but the 49-year-old got it spot on against a Uruguay side lacking ideas and inspiration without one half of their talismanic strike duo in Edinson Cavani. Real Madrid defender Raphael Varane headed Les Bleus into the lead from a free-kick in the 40th minute, and Hugo Lloris’ brilliant save to deny Martin Caceres from hitting back almost immediately kept them in control of the tie at half-time. Antoine Griezmann’s second-half goal then confirmed the victory in a moment to forget for goalkeeper Fernando Muslera. The Atletico Madrid forward tried his luck from distance with an unspectacular strike just after the hour mark, but Muslera misjudged the flight and could only watch as the ball squirmed through his grasp and over the line. France’s quest to lift the trophy goes on to a semi final against neighbours Belgium in Saint Petersburg. 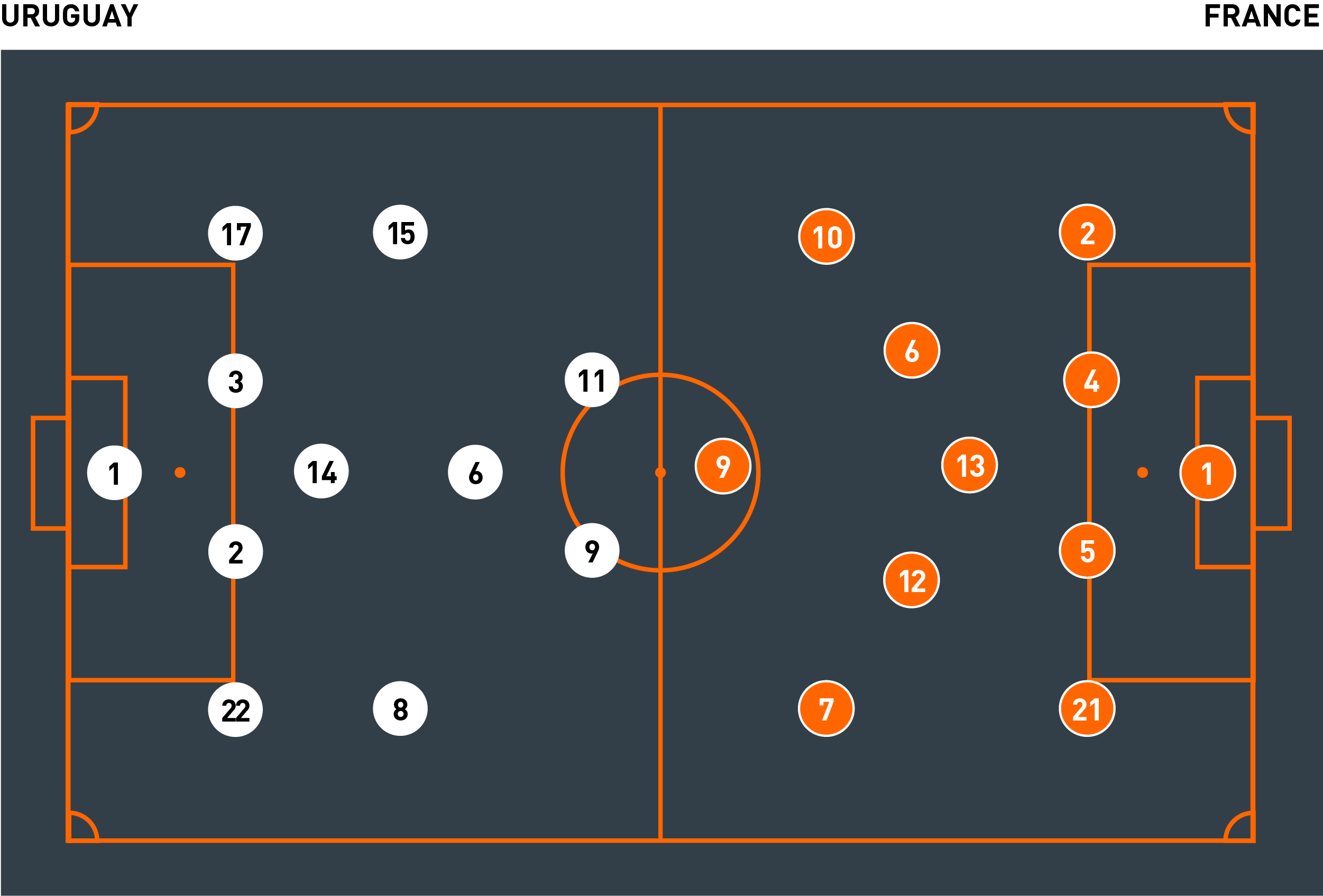 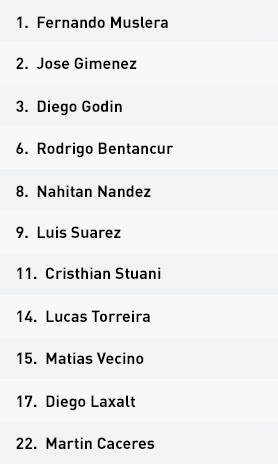 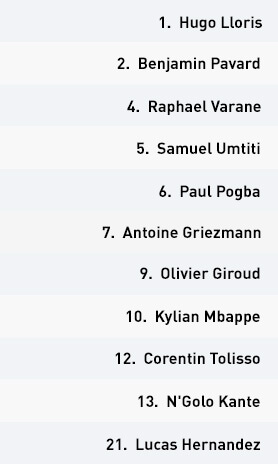 Uruguay set up in a 4-4-2 formation, with Cristhian Stuani taking the injured Edinson Cavani’s place up front alongside Luis Suarez. The usual midfield four of Lucas Torreira, Matias Vecino, Rodrigo Bentancur and Nahitan Nandez operated in a flatter system than the diamond seen in previous matches at this tournament.

Oscar Tabarez's team again prioritised overloading the right side, but the potential threat of Kylian Mbappe on the counter-attack, who remained high throughout, meant that Diego Laxalt was reluctant to get forward on the left. As a result, they lacked any real width, which was relatively straightforward for France to defend against.

Uruguay looked disjointed in possession and tended to play direct to Suarez and Stuani, who struggled to bring the ball under control and create anything substantial. Having a flatter midfield line also meant that there were fewer players operating between France’s lines, thus affording fewer opportunities for penetration.

Uruguay initially pressed in a 4-3-3 formation out of possession, with Bentancur joining Suarez and Stuani in the front line, while Torreira, Vecino and Nandez formed the second line ahead of the back four. This would sometimes form a diamond further up the pitch, where Bentancur would operate at the top.

They were a little too disorganised out of possession and were regularly outnumbered around the ball by France players, however – and Paul Pogba in particular proved difficult to deal with when in possession. Operating in a diamond often meant that the individuals within the second line of their block were too far apart from one another and were easily outnumbered through two-on-one and three-on-two situations at different areas of the diamond.

Even when the diamond was positioned fairly close together, France were still able to overload certain areas through their midfield three and full-backs. This also meant that Uruguay couldn’t cover enough of the field – if play was switched, they would have a lot of work to do in order to shuffle over and prevent France from penetrating. Uruguay were ultimately outsmarted by France, particularly in midfield, and rarely looked capable of truly threatening their opponents’ defence.

France set up in a 4-3-3 in possession, with N’Golo Kante playing just behind Paul Pogba and Corentin Tolisso in the midfield, and Olivier Giroud, Kylian Mbappe and Antoine Griezmann making up the front line. Tolisso tended to play higher than his two midfield teammates, as Griezmann would often move in centrally.

All three strategies were effective, and Uruguay struggled to deal with them. Positionally, France were the far superior team – they would most often have numerical superiority around the ball, as well as having width and security for potential out balls.

Out of possession, they quite boldly tended to leave the front three up, so they were ready to capitalise on any counter-attacking opportunity. In their set-up, two of the three forwards would typically drop in with the midfield three to form a 4-1-4-1 or a 4-5-1 – but Les Bleus were almost always positioned to break quickly.

This strategy hasn’t been uncommon in the knockout stage of the tournament, and offers two main benefits. In this encounter, it was successful in discouraging other Uruguayan players from joining the attack – they would be fearful of leaving France’s front three matched up with their defenders on the halfway line, particularly with Mbappe’s pace. It also didn’t unsettle their midfield, as the dynamism of Kante and Pogba meant the pair were comfortable in covering the extra ground to prevent Uruguay from playing through. It was only as the game progressed and France set out to protect their lead that one or more of the front three would drop in to help the midfield out of possession.

It’s the first time since 2006 that France have reached the semi finals of the World Cup. Worryingly for their next opponents, Belgium, they seem to have raised their level; Deschamps, who has been on the receiving end of criticism in Russia, looks to be getting his tactics spot on.