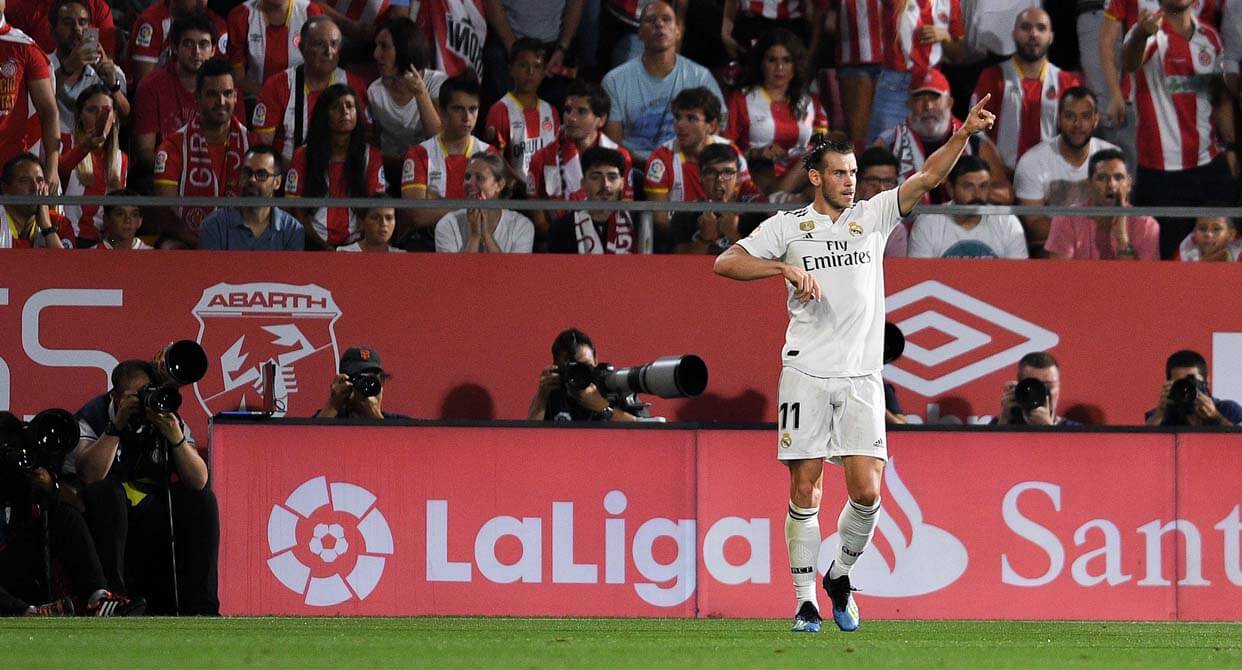 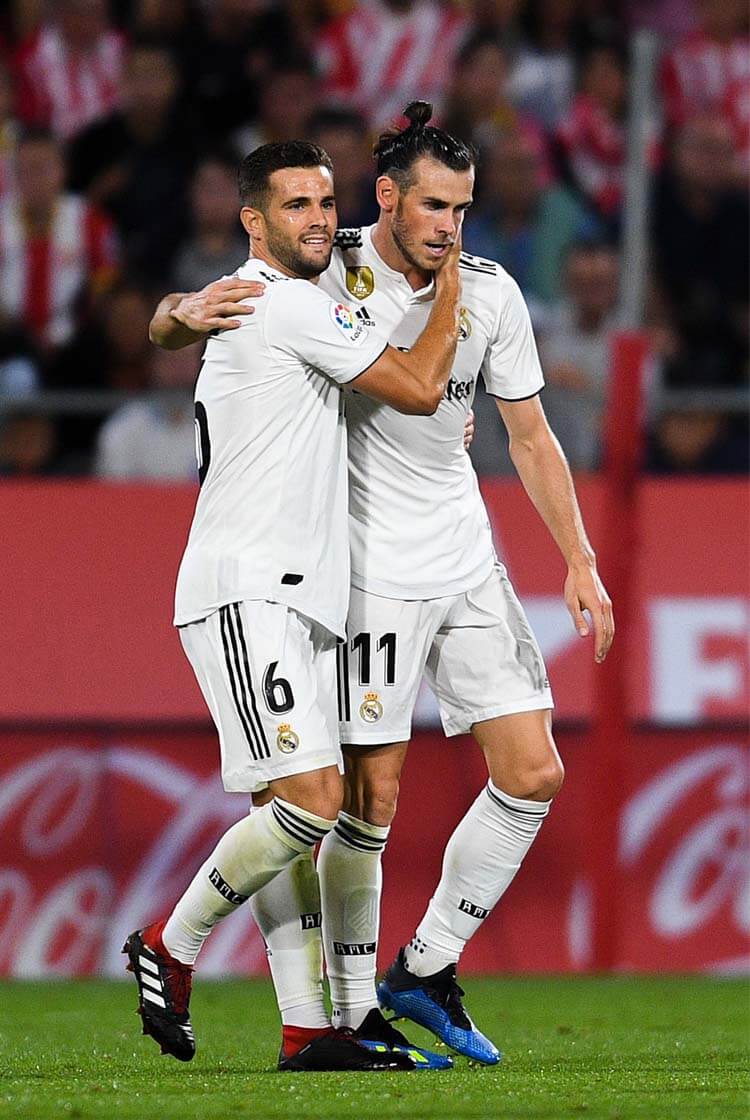 Real Madrid continued their winning start to the La Liga season by coming from behind to beat Girona at the Montilivi. Girona had upset Real in this fixture last season, and got off to the perfect start when Borja Garcia fired home with just over a quarter of an hour played. Los Blancos looked uncomfortable for much of the first half, but a penalty awarded for a foul on Marco Asensio saw Sergio Ramos equalise from the spot. Momentum shifted in Real’s favour shortly after the restart, when Asensio won another penalty and Karim Benzema confidently dispatched his spot-kick. Gareth Bale gave his team breathing space a few minutes later, before Benzema grabbed his second to seal the three points late on. 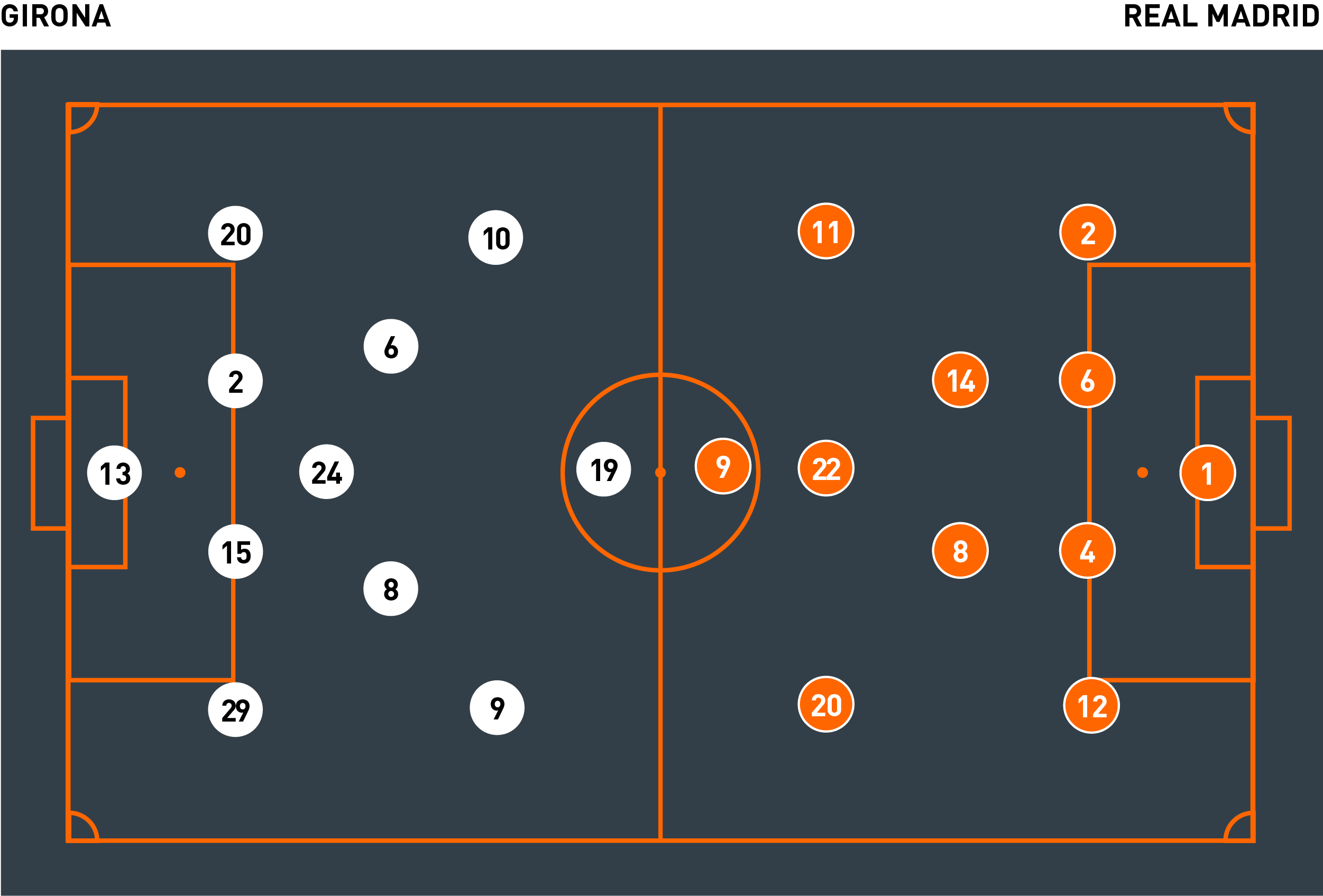 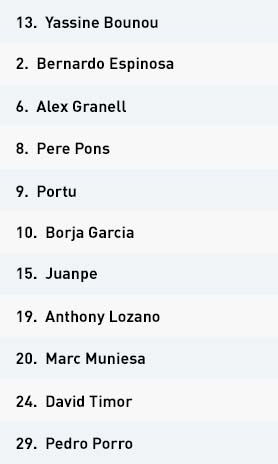 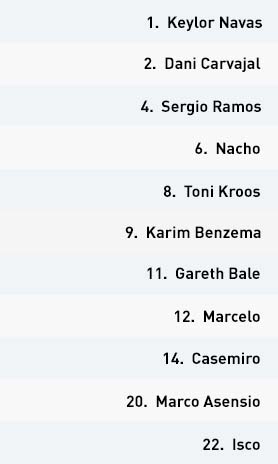 Girona set up in a 4-3-3 in possession. David Timor sat at the base of the midfield triangle, with Pere Pons and Alex Granell just ahead of him. Portu and Borja Garcia supported lone forward Anthony Lozano in attack.

Their main objective was to try to play in behind Real Madrid’s back line early to meet the runs of Lozano, but they were equally happy to play directly to the striker in the air to trouble centre-back Nacho. If there wasn’t an opportunity to play in behind early, they were content to retain the ball and build from deep. Against Real’s aggressive man-oriented press, however, this proved difficult; it often ended in inaccurate passes and errors that turned possession over.

The hosts favoured attacking Real’s left side, possibly in the hope of exploiting the space left by the attack-minded Marcelo, and they did create occasional chances through this. But as the game progressed, their opponents took increasing control of the ball and they struggled to create anything of note.

Girona would typically press in a 4-4-2 out of possession, usually with Garcia and Lozano leading the line. When Los Blancos built on the right-hand side, Garcia would show Nacho or right-back Dani Carvajal towards the touchline by pressing the inside shoulder of the ball-carrier. Lozano, meanwhile, would position himself to discourage the ball inside, effectively trying to trap Real where they could apply more intense pressure.

Their block was reasonably organised and caused Real several problems in their build within the opening 15 minutes of the match. Julen Lopetegui reacted by altering the shape of his team, with Isco becoming more involved in deeper areas. Girona naturally fatigued and struggled to close the gaps as the game progressed – allowing far too many passes into more dangerous players. Real’s attacks began to flow, and with that came goals. As such, there can be few complaints over the final result.

Real Madrid initially set up in a 4-2-3-1, with Toni Kroos and Casemiro playing in the deep central midfield positions and Isco in the number 10 role. The front four of Marco Asensio, Isco, Gareth Bale and Karim Benzema provided notable interchanges of position, but these rotations didn’t cause Girona many problems in the early stages.

With Real struggling during the build-up phases within the opening 15 minutes, they soon switched to a 4-3-3. Isco moved into the midfield triangle, thus overloading Girona’s central out-of-possession pairing of David Timor and Pere Pons. This created a much cleaner build and allowed Real to move the ball into more advanced areas of the pitch.

The visitors looked much more dangerous when their full-backs were providing the width, allowing more players to play inside to get on the ball and create. Marco Asensio was hugely influential, with his dribbling ability tormenting Girona throughout. Real had found it difficult to break down their opponents’ block, with success through their off-the-ball movement and passing the ball across the pitch limited – until Asensio got on the ball. The 22-year-old took responsibility in driving at the opposition, which always forced another Girona player to commit to pressing him, thereby creating new space beyond that could be exploited. Isco and Bale also utilised this strategy, but not to the same extent.

Real deployed an aggressive man-oriented press out of possession. Their initial 4-2-3-1 enabled them to lock on to Girona’s midfield three, with Kroos and Casemiro taking the higher two players while Isco could mark Timor, the deepest of the trio. Benzema would press the centre-back in possession, and Bale and Asensio would be fixed on the full-backs. Dani Carvajal and Marcelo would track any runs made by Portu or Borja Garcia, leaving Nacho and Sergio Ramos to deal with striker Anthony Lozano.

Despite switching to a 4-3-3 in possession, their structure out of possession was relatively unchanged. Real would hunt with intensity and look to force Girona into errors by affording them very little time on the ball. Despite a lively performance from their opponents, Real were eventually too much to handle at the Montilivi.