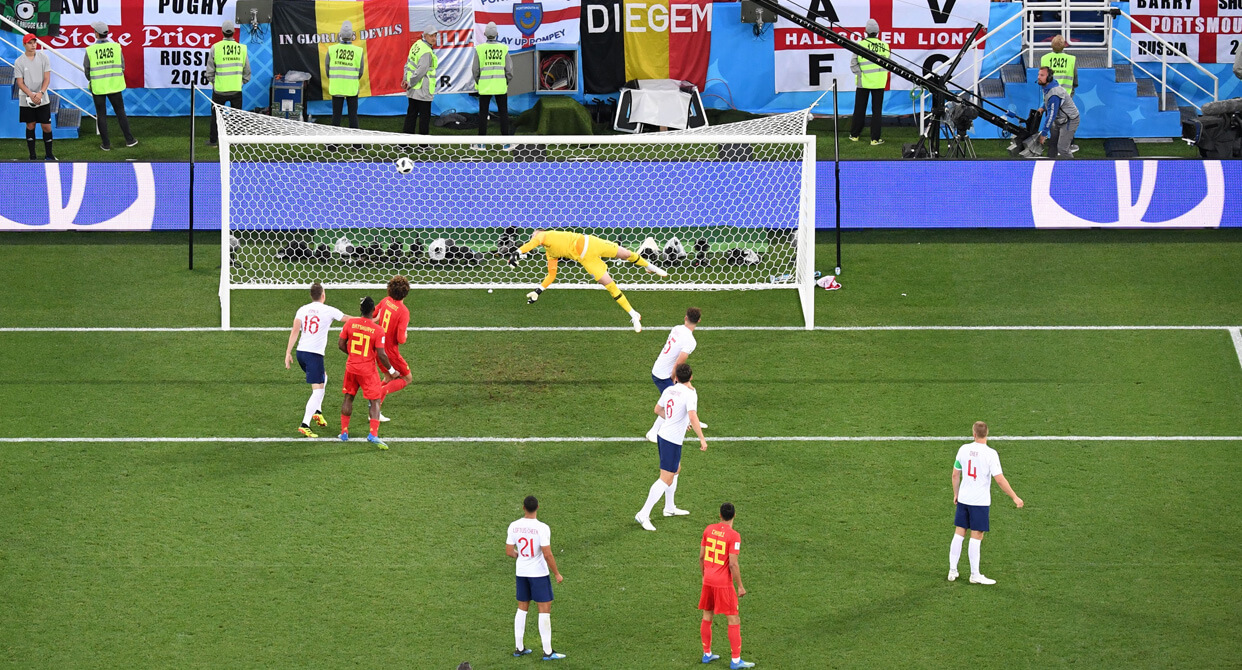 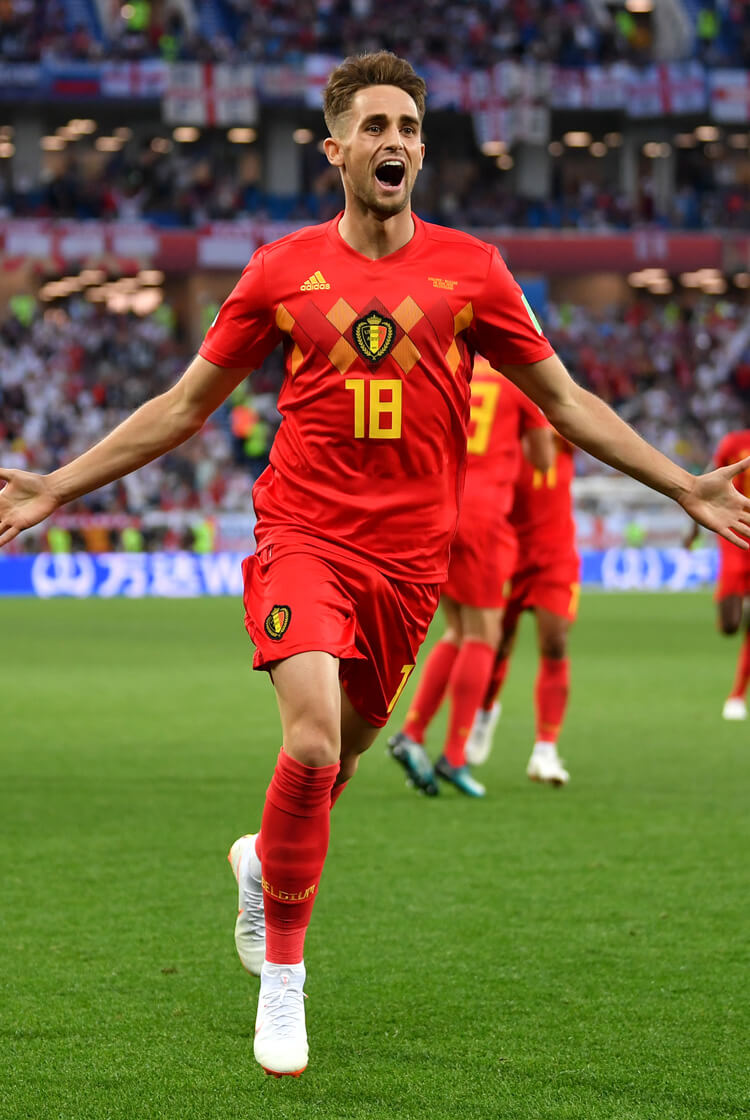 There was plenty of talk over whether England and Belgium would actually want to finish top of Group G, with much written over the 'easier' run the second-placed team might get to a potential World Cup final in Russia. As the pair met in Kaliningrad, both managers made a number of changes to their starting line-up, making for a strange encounter that had the feel of a friendly match. It was a sublime curling effort from former Manchester United forward Adnan Januzaj early in the second half that made the difference, meaning Roberto Martinez's side finished in top spot with three wins from three. We'll soon learn if taking second spot in the group was a blessing in disguise for Gareth Southgate and his players, with England set to meet Colombia in the last 16 on Tuesday. 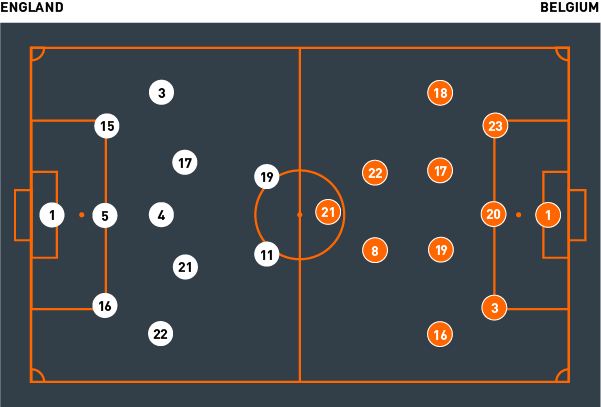 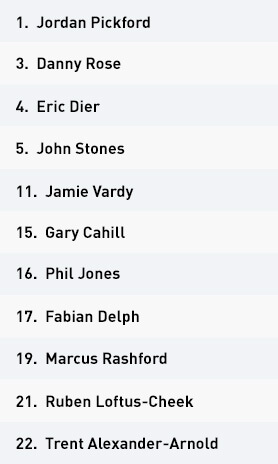 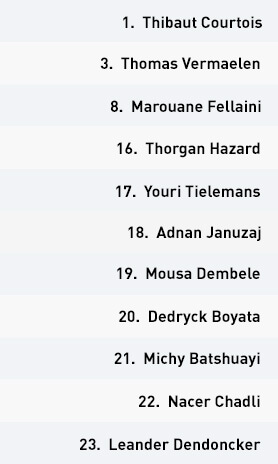 In possession, England’s chief initial idea was to try to get the ball in behind for Jamie Vardy to run on to, but the Belgium defence were largely untroubled by this. With Vardy and Marcus Rashford on the top line, and with Belgium packing their midfield, building from deep was difficult for Gareth Southgate’s men. They had to rely on the relationship between Fabian Delph and Danny Rose to occasionally break Belgium down on the England left.

This improved in the second half, as Vardy and Rashford would start to drop from the top line and play quick one-touch passes that individually pulled Belgium out of their compact unit. This created space to penetrate – as was the case for England’s best chance, which fell to Rashford.

Notably, though, it was clear that England’s creativity suffered without Dele Alli and Jesse Lingard – rested for the knockout stage – playing between the lines. Ruben Loftus-Cheek and Delph are not as creatively influential as the aforementioned pair in this 3-5-2 system.

Out of possession, England operated a 5-3-2 in central areas, with Eric Dier pushing up to join Loftus-Cheek and Delph in a flat midfield three, while the full-backs would drop with the three central defenders. When the ball went wide, the full-back on that side would push up, effectively making a 4-4-2.

England were outnumbered in central areas – four versus three – which caused some problems in the first half. As a result, there were occasions when Loftus-Cheek would join Vardy and Rashford on the top line and England would look to press high, forcing them long, in order to restrict the chances of Belgium playing through the middle. With Marouane Fellaini on the field, long balls forward could have been problematic – fortunately, these long passes were largely inaccurate.

Belgium set up in a 3-4-2-1 in possession. Mousa Dembele and Youri Tielemans sat as the deeper two in midfield, with Nacer Chadli and Marouane Fellaini ahead of them. Adnan Januzaj and Thorgan Hazard played in the wing-back positions and were key to the build of their attacks.

With Belgium’s midfield effectively forming a box of four, they were able to outnumber England’s three and bring the ball into these areas with relative ease. This helped Roberto Martinez’s team to control the majority of the first half.

As England reacted and adapted to this, Belgium chose to pursue their creation in the half-space. The more attacking midfielders, Chadli and Fellaini, would operate in these areas, either on the same line or just beyond their opponents’ midfield line of three. This made it difficult for England to cover the ground, and much easier for Belgium to penetrate.

Additionally, the wing-back on that side would provide an option out wide – so when the attacking midfielder would receive the ball beyond the midfield line, he would attract one of the England defenders towards him. If it was a full-back, he could play to his teammate out wide; if it was a centre-back, there may have been space for central striker Michy Batshuayi in behind.

While the attacking midfielders pulled into the half-space, it would be important for Dembele and Tielemans to stay more central to guard against potential counter-attacks. It was these relationships that led to Belgium’s goal, where Januzaj was free in the wide area and able to cut inside to finish.

Out of possession, Belgium operated a system depending on how wide the ball was. In wide areas, the formation would be a 4-3-3 with the ballside full-back pushing up to join Dembele and Tielemans in the second line, while the other full-back tucked in with the three centre-backs to make a back four.

The formation would be a 5-2-3 when the ball was central, with Fellaini and Chadli on the top line with Batshuayi. This gave Belgium a central overload, making it difficult for Eric Dier to get on the ball and play forward from England’s midfield.

England were therefore forced into long passes or into the wide areas, where Belgium would form their wide-area shape. The back three of Dedryck Boyata, Thomas Vermaelen and Leander Dendoncker anticipated the long pass behind them well in a largely comfortable contest for Belgium’s defence.