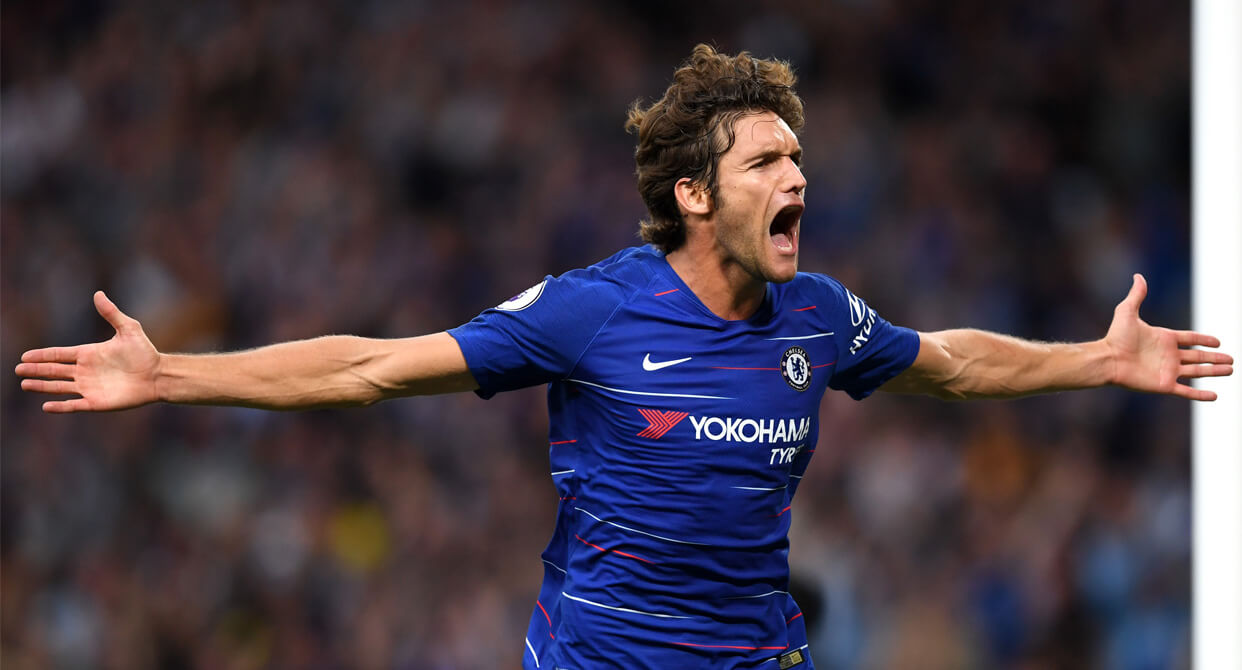 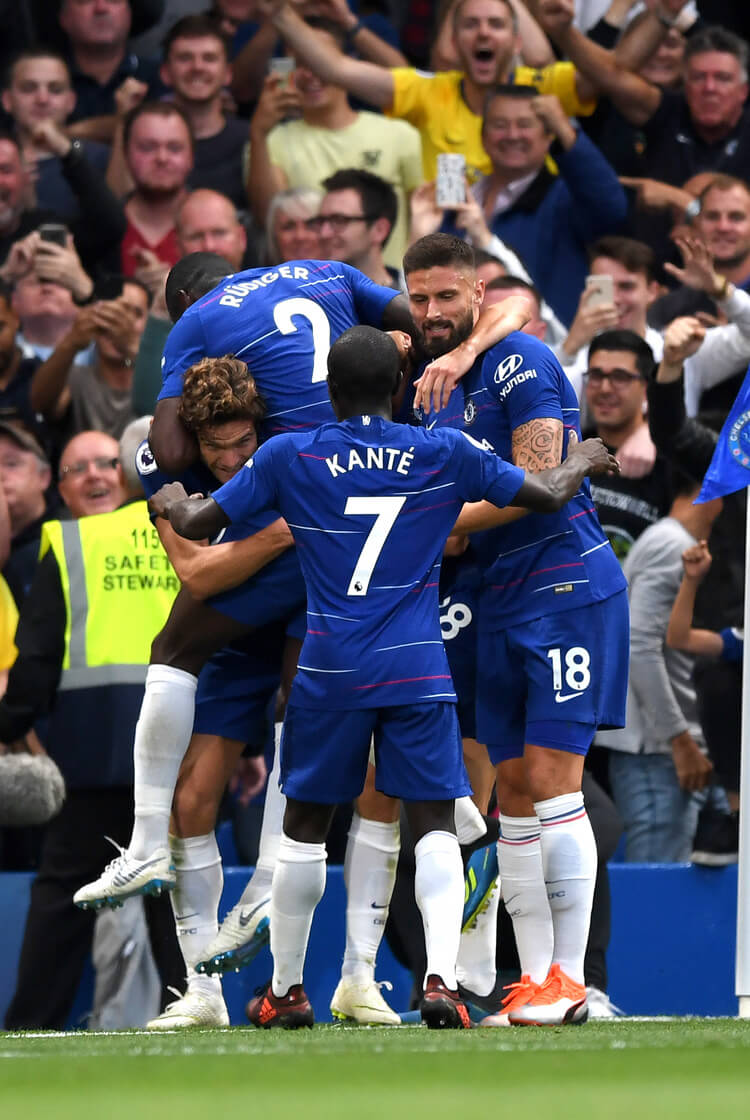 Unai Emery and his Arsenal players will replay over and over the number of glorious chances they missed against a Chelsea team who rode their luck but eventually came out on top in this thrilling Premier League contest at Stamford Bridge. Pedro and Alvaro Morata gave the Blues a two-goal cushion within the opening 20 minutes, but after shaking off the frustration of squandering earlier opportunities, Henrikh Mkhitaryan and Alex Iwobi drew proceedings level with two goals in four minutes shortly before half-time. Chelsea’s control in the second period soon returned, however, and coach Maurizio Sarri unsettled the Arsenal defence further with the introductions of Eden Hazard and loan signing Mateo Kovacic. The former predictably proved a menace, and nine minutes from time delivered the decisive ball for Marcos Alonso to finish, making it two wins from two for the Blues – and two defeats from two for the Gunners. 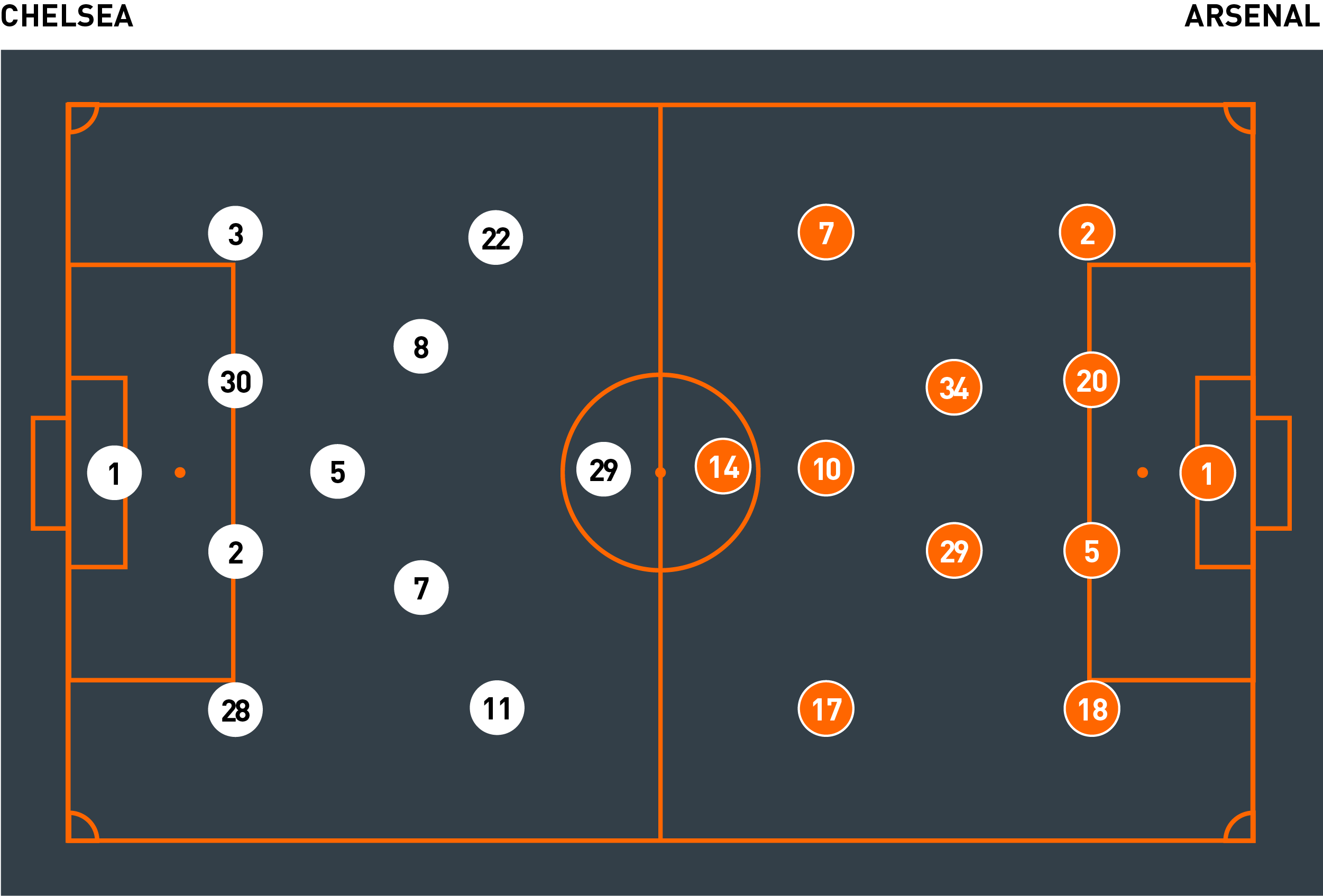 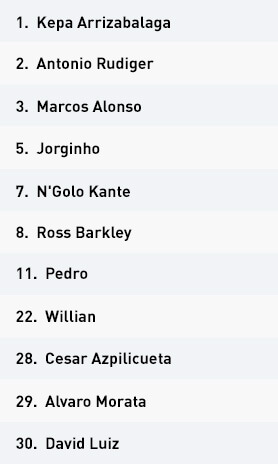 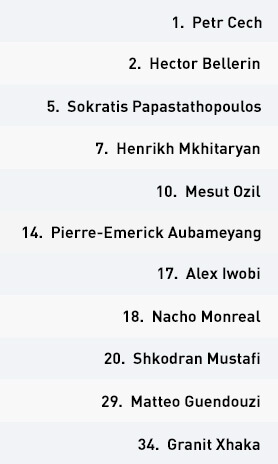 Head coach Maurizio Sarri named an unchanged starting line-up from Chelsea’s opening-day victory over Huddersfield. The hosts’ start was bright, as they dominated the early proceedings. Jorginho’s dropping in between Chelsea’s two central defenders, David Luiz and Antonio Rudiger, was highly effective. From here, they could comfortably play around the initial high press from Arsenal.

During the opening stages, it was obvious that Arsenal’s front line had identified Rudiger as the weak link in possession. Rather than looking to force him into an error on the ball, leaving him open to create a pressing trap, Pierre Emerick-Aubameyang simply man-marked the Germany international. Against such a tame defensive structure, penetration was relatively simple for Chelsea.

With Mesut Ozil on Jorginho, David Luiz could drive forward unchallenged with the ball. As the Brazilian stepped into midfield, an Arsenal player was eventually lured to the ball – which then created a free man higher up the pitch. Ross Barkley was usually the vacant midfielder, frequently exploiting the weakness of the Gunners’ man-marking structure.

Barkley’s forward runs along the inside left channel caused multiple problems, as the width of Willian and Marcos Alonso created the perfect gap between Arsenal’s right-back and central defence. The inside movements of Pedro from the right channel also ensured Arsenal’s two centre-backs each had a man to mark, meaning neither could sweep across and deal with Barkley’s penetrating runs.

Inside 20 minutes, Chelsea had a deserved two-goal lead. The opening finish was a fine example of Sarri’s trademark third-man movements. Left-back Alonso played the ball into Willian, who moved play to Jorginho deep in midfield. As Willian drew defenders in, Alonso continued his run forward and was expertly found by Jorginho’s penetrating pass. Pedro crucially began in an offside position, ensuring that once the cross was delivered from an advanced Alonso, he was ahead of the dropping defenders and free to finish unchallenged.

Despite Arsenal improving, Chelsea doubled their advantage. A long ball forward exploited Arsenal’s high line, as Alvaro Morata surged forward and bullied Shkodran Mustafi before cooly slotting home past Petr Cech. At this point, it may have been a case of how many for the home side, but the Gunners responded well. Chelsea were second best for the remainder of the second half, and lucky not to have gone into the break behind.

The second half began with little tactical output from either side. Both teams conceded possession regularly, with Chelsea’s high press becoming more intense and Arsenal’s defence looking increasingly uncomfortable on the ball.

Noticeably, lone striker Morata became much more involved in the build-up. With the gap between Arsenal’s back line and their holding midfielders increasing, Morata now had space to drop in and create a central three-against-two overload with Barkley and N’Golo Kante.

To increase the home side’s threat, Eden Hazard and Mateo Kovacic were introduced on the hour mark, with Olivier Giroud joining the action for the final quarter – and Chelsea began to dominate. A combination of Hazard’s trademark dribbles along Arsenal’s right side, his link-up play with the promising Kovacic, and Jorginho being afforded the space to move higher against the inconsistent tracking of Ozil, resulted in plenty of chances.

They eventually grabbed the winner in the 81st minute, as an overlapping run from Alonso went untracked. Hazard’s turn of pace created an opening to cross, and the left-back was perfectly placed to sweep the ball home and claim all three points for his team.

Unai Emery made two changes from the defeat to Manchester City. Nacho Monreal was brought in for the injured Ainsley Maitland-Niles at left-back, while Alex Iwobi replaced Aaron Ramsey in an attacking midfield position.

It wasn’t long before the defensive structure of Arsenal’s 4-2-3-1 against a team looking to build short was brought into question. At the heart of their failure to contend with their opponents’ strategy was Pierre Emerick-Aubameyang’s lack of timing in creating a pressing trap around Antonio Rudiger. David Luiz consistently stepped out of defence unchallenged, overloading defensive midfielders Granit Xhaka and Matteo Guendouzi.

The roles within Arsenal’s high press soon changed to stop the progress of David Luiz. Aubameyang moved on to the Brazilian, while Mesut Ozil tightened his grip on Jorginho. This change in tactic resulted in Rudiger being the hosts’ free man during their deep build. With the exception of his long deliveries to the left channel, he was weak in possession, increasingly gifting the ball back to Arsenal as the first half wore on. With both Chelsea full-backs extremely proactive in attack, quick combinations in wide areas enabled Arsenal to attack, particularly after a high regain. This was their best hope of creating chances, as Chelsea looked highly vulnerable when defending crosses.

Despite conceding first, Arsenal grew into the first half and created a number of chances from cut-back crosses. The attacking width of right-back Hector Bellerin, coupled with the narrowness of Chelsea’s midfield unit, enabled an earlier pass from deep into Bellerin. This crucially allowed Arsenal to attack quicker, giving the Chelsea back line less time to organise and set a defensive structure for crosses. With Jorginho lacking speed during his recovery runs, cut-back balls from Arsenal’s wide players offered an effective method to penetrate the penalty area.

Arsenal dominated proceedings after conceding the second goal. Guendouzi dropped into the back line (forming a central trio when building), but moved to the side rather than between the two centre-backs, as is most common. This lured Chelsea’s front three, particularly Pedro, higher when pressing. Both full-backs were then forced to jump on a higher man as Chelsea’s wingers stepped up. This created significant spaces where Chelsea’s full-backs would normally be, and Arsenal didn’t hesitate in exploiting the narrowness of their opponents’ midfield.

Bellerin and Monreal fired multiple cut-back crosses, targeting the space Jorginho and Kante failed to protect when recovering. Mkhitaryan made up for an earlier glaring miss with a fine low strike, before Iwobi turned the game on its head with a similar finish from an identical crossing situation. With Jorginho the single pivot for Chelsea, he was forced to help Alonso deal with the two-against-one Bellerin and Mkhitaryan had created. It was this that provided the space around the penalty area for both Arsenal goals.

Lucas Torreira replaced the ineffectual Xhaka at half-time, perhaps with the hope he would offer more defensive stability in midfield. Soon, however, Arsenal had to react to an aggressive high press on their deep build – and with Chelsea’s forwards distanced from their midfielders when out of possession, the visitors looked to bypass the first line with longer, more direct passes forward. But for Aubameyang’s hold-up play lacking quality, this might have brought more success.

Ozil’s role was similarly problematic. The playmaker repeatedly lost track of Jorginho, and was soon replaced by the more mobile Aaron Ramsey. Alexandre Lacazette was also introduced for Iwobi, whose second-half display was poor in comparison to his first 45 minutes. Torreira was arguably the standout player for the Gunners in the second period, as his disguised forward passing was effective in penetrating Chelsea’s compact midfield unit.

Despite creating chances in the second half, Arsenal fell to a second consecutive Premier League defeat, as Marcos Alonso’s late goal proved to be the winner. They will look back on chances wasted, particularly in the first half, with regret. Had they been more clinical in front of goal, they could have come away from Stamford Bridge with one point, or even three.