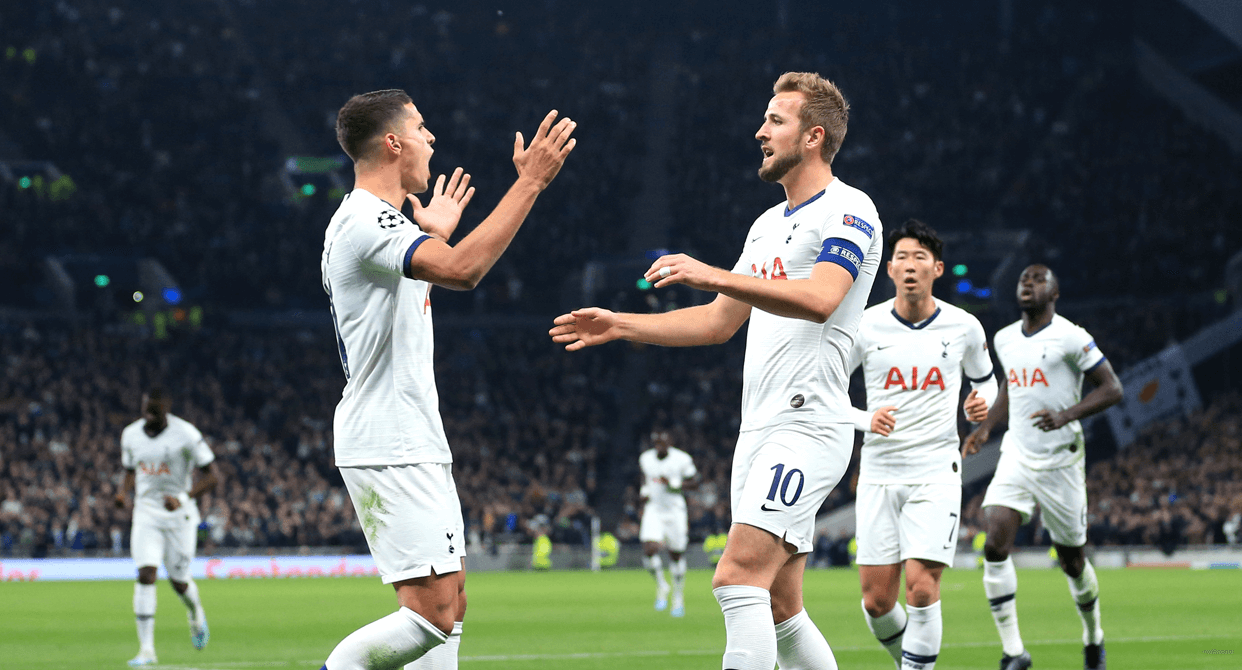 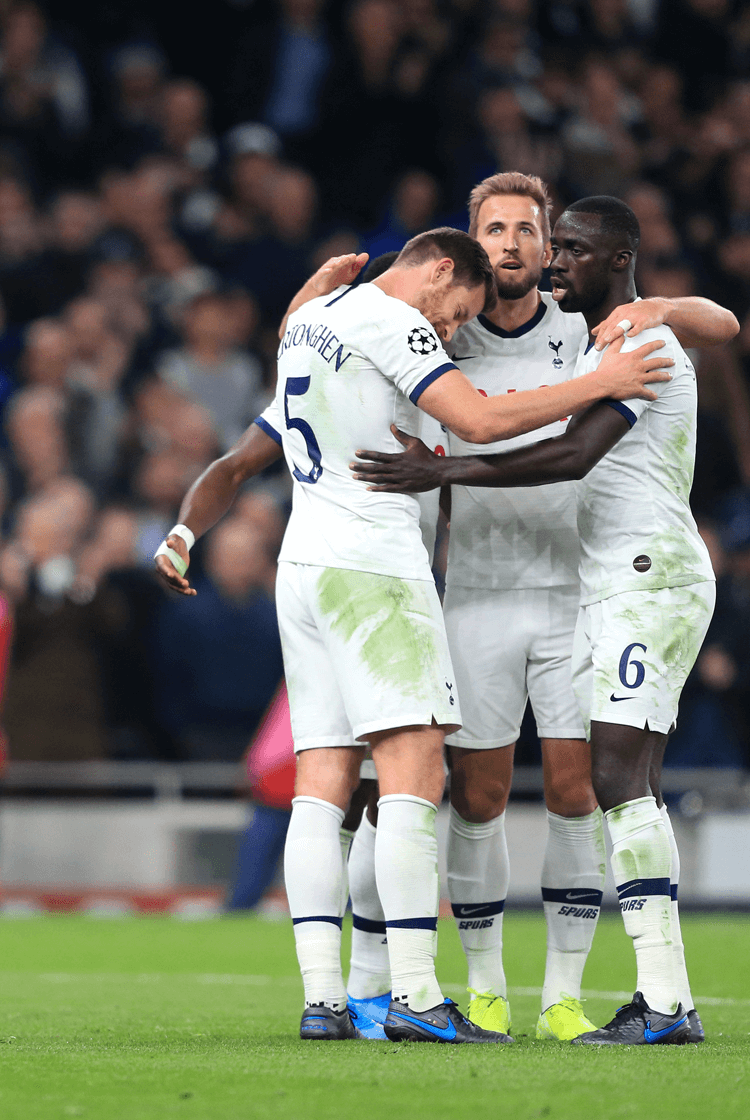 Last season's runners-up Tottenham revived their Champions League campaign by moving on from their 7-2 hammering by Bayern Munich with a convincing victory over Red Star Belgrade. A header from Harry Kane and two finishes from Son Heung-min gave them a three-goal lead by half-time, after which Erik Lamela and Kane added further goals to ease the pressure on manager Mauricio Pochettino. Dele Alli, who scored their equalising goal as they avoided defeat against Watford on Saturday, again impressed in the absence of Christian Eriksen. "Of course now is a tough situation," Pochettino later said. "We are a club and that commitment that we showed in the past, we are now showing." 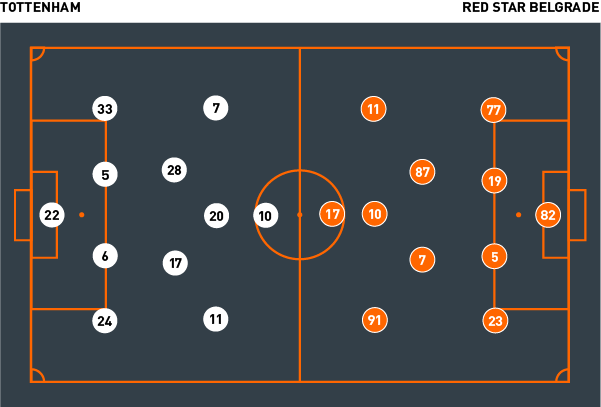 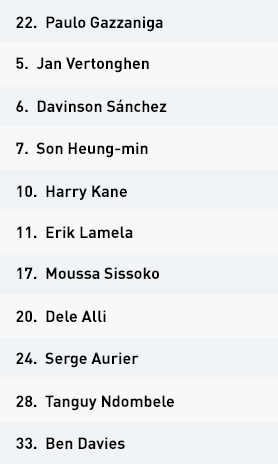 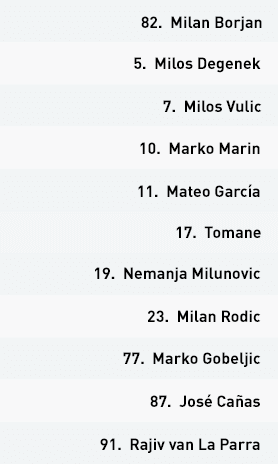 Mauricio Pochettino organised Tottenham into a 4-2-3-1 formation, in which Moussa Sissoko and Tanguy Ndombele formed the double pivot in front of their defence. They sought to play on the front foot, perhaps convincing in doing so more than they have at any point since their season-opening victory over Aston Villa, and used the movement of their four most advanced players to create spaces to play through.

Dele Alli was given freedom to roam. He withdrew to receive possession in earlier phases, and drifted towards Son Heung-min during the first half to create an overload on the left wing. Alli, Son and Erik Lamela also made penetrative runs in behind while lone forward Harry Kane withdrew towards the ball, unsettling an opposition defence faced with the dilemma of affecting Kane or monitoring the forward runs. Full-backs Serge Aurier and Ben Davies then advanced, often giving Spurs six-strong attacks in front of Sissoko and Ndombele, who supported behind and recycled possession.

That structure encouraged more orchestrated attacks, and therefore more goalscoring chances. The hosts also posed a threat during transitions, when they regularly sought to commit runners ahead of possession and, as they unfolded, created passing lines by making diagonal runs ahead of the ball to draw a defender.


Tottenham largely retained their 4-2-3-1 shape out of possession, and attempted to press their opponents high in the early stages of their build-ups. Kane would pursue a central defender and show them wide; Alli would move to the nearest central midfielder, while the relevant full-back and wide attacker would advance, essentially cutting off one side of the pitch.

Red Star occasionally succeeded in switching play; when they did, Spurs showed a lack of co-ordination surrounding who moved to the visitors’ two free central midfielders. They showed greater organisation when defending in a mid-block, which they did from around the 30-minute mark with victory already likely.

For a team that has underperformed for much of the season, Spurs finally showed signs of rediscovering what it was that inspired them to last season’s Champions League final. Their 12 shots on target was a significant improvement on the four they managed when losing 3-0 at Brighton, and the three recorded during Saturday’s 1-1 draw with Watford.

The penetrative runs made by Son, Lamela and Alli unsettled their opponents and encouraged Kane to increasingly withdraw and link play. He had previously been doing so without those runs behind being made, so possession was too often recycled without Spurs progressing the ball. There was also a marked improvement in their output during transitions; their previously flat counter-attacking featured those making runs ahead of the ball in straight lines, which were easier to defend against. These runs were far more dynamic and often across opponents, with the intention of creating spaces for the next pass.

What remains unclear is the extent to which this could prove a turning point for Pochettino’s team; they were at home against opponents who posed minimal threat. They next visit Liverpool in the Premier League on Sunday afternoon.

Red Star Belgrade, like Tottenham, were set up by manager Vladan Milojevic into a 4-2-3-1 led by lone striker Tomane. They attempted to play to him directly, and then support through their attacking midfielders pursuing second balls and maintaining attacks. They later sought spaces out wide, keeping the attacking midfielders central while advancing their full-backs, and remaining close together to encourage penetrative passes.

The visitors had more possession in the second half, when Spurs increasingly dropped off and focused on their mid-block. They often then circulated possession in defence, but their limited movement further forward contributed to their ongoing struggles to penetrate.

Out of possession they adopted a 4-4-2 mid-block in which former Chelsea midfielder Marko Marin advanced to join Tomane on the top line, while Mateo Garcia and Rajiv van La Parra withdrew alongside Jose Canas and Milos Vulic. They were content for Spurs’ central defenders to have possession, but if it travelled to either full-back they were confronted with an intense press that was maintained against those central defenders if it was returned to them.

The visitors succeeded in forcing errors when they pressed with aggression, but struggled for organisation when the hosts’ goalkeeper Paulo Gazzaniga operated as the free number to create three-on-twos. They also struggled with Spurs’ attacking movements and defending the channels, and were too often drawn to movements made by Harry Kane. They were also vulnerable during defensive transitions because of a lack of security behind the ball.