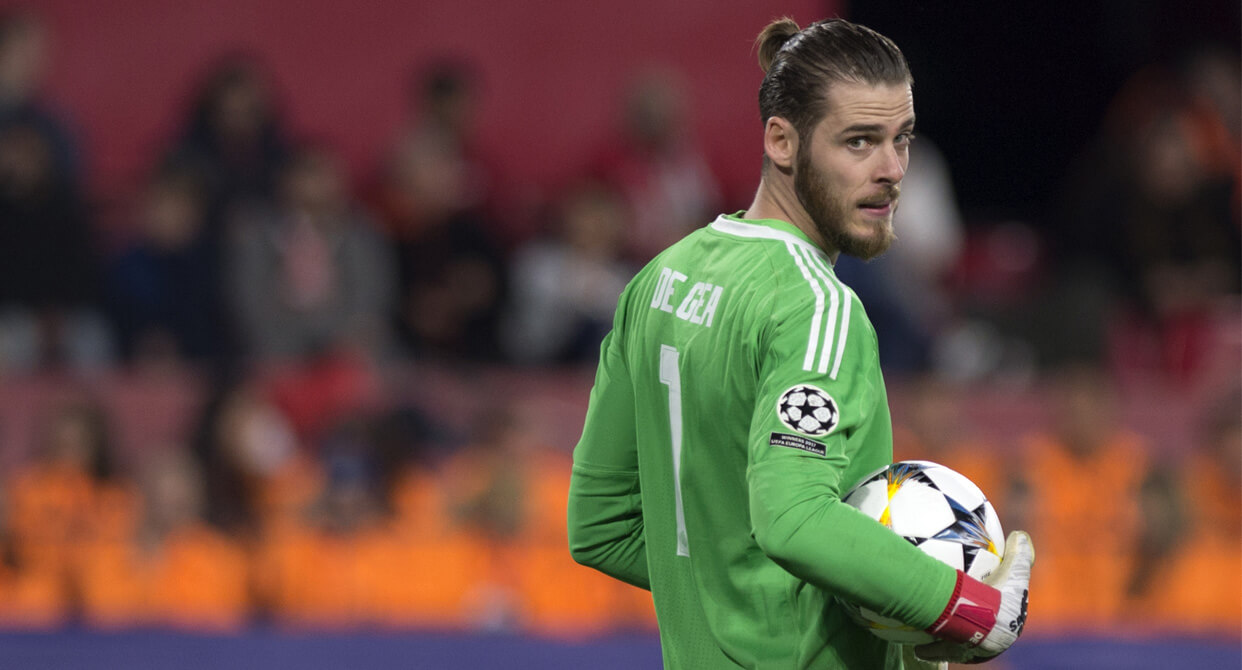 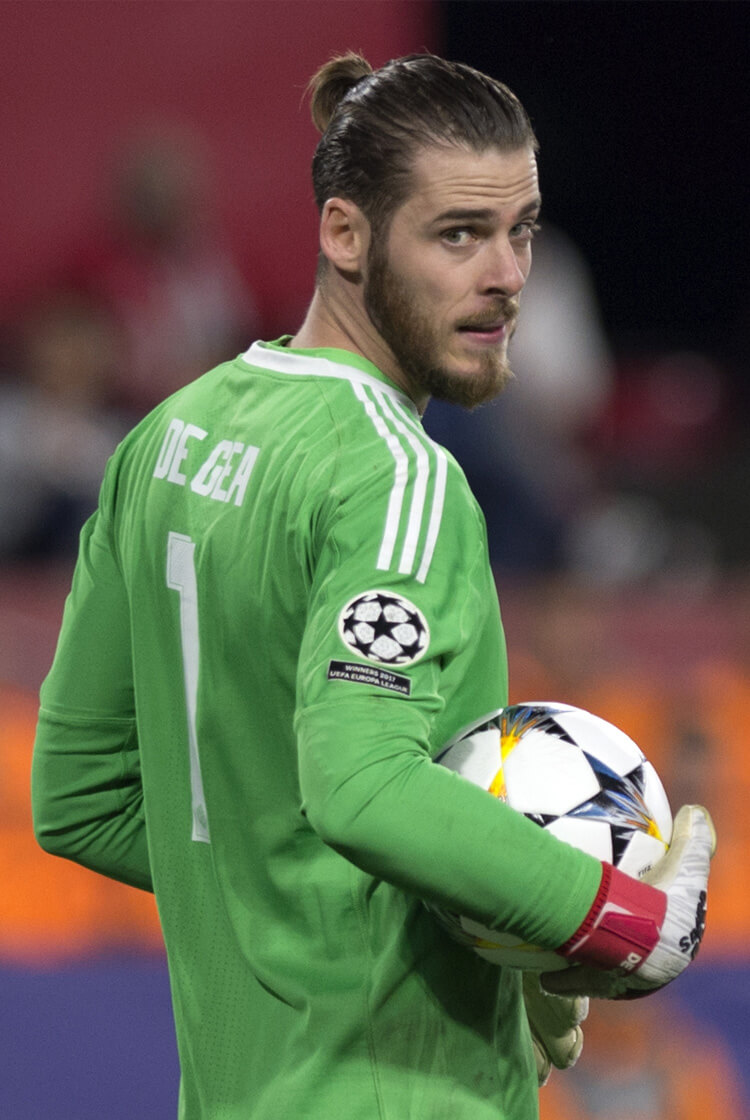 Manchester United emerged from the first leg of their Champions League last-16 tie as favourites to progress, but they were far from their best in this cagey affair in Seville. An early injury to Ander Herrera saw Jose Mourinho turn to Paul Pogba after controversially leaving United's record signing out of his starting XI, but the Frenchman had little impact in a team performance focused more on defensive solidity than attacking intent. But for one world-class David de Gea save from a Luis Muriel header shortly before half-time, the visitors could have lost – but the hosts rarely threatened in a disappointing second half and United looked happy to settle for a clean sheet. 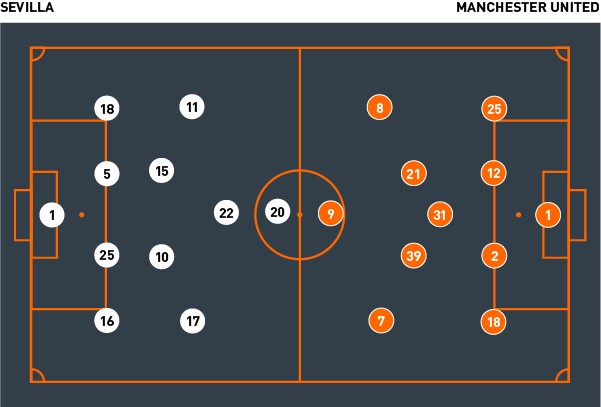 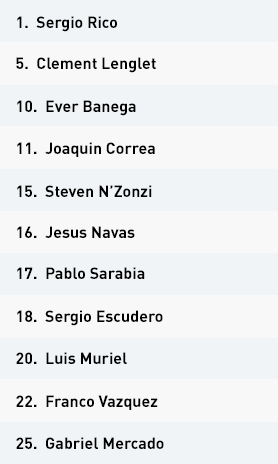 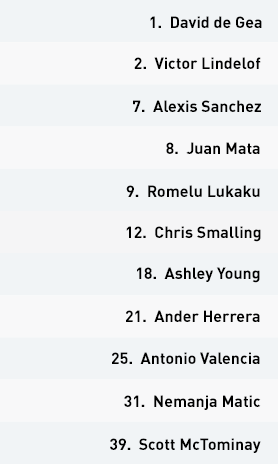 Vincenzo Montella’s side started in a 4-4-1-1 formation in both attack and defence. The Italian manager put the emphasis on his team’s wing play, looking to use the pace and directness of Jesus Navas and Pablo Sarabia on the right, and Sergio Escudero and Joaquin Correa on the left, with Franco Vazquez operating in the hole behind striker Luis Muriel.

In the defensive third, Sevilla kept a solid defensive structure, maintaining a numerical advantage to limit Manchester United’s threat in potential shooting positions and relying on the central midfielders to mark Nemanja Matic, early substitute Paul Pogba and Scott McTominay. Steven N’Zonzi in particular brought balance to the team in the middle of the park, looking to protect his back four throughout, while Clement Lenglet impressed in his individual battle with Romelu Lukaku. The French centre-back anticipated the movement of the Belgian to prevent him from getting in behind, and dealt efficiently with the direct approach employed by their opponents.

In attack, the hosts alternated between direct play into the towering N’Zonzi and combination play, when their centre-backs had space to exchange short passes. Their main aim was to transfer possession to Ever Banega or N’Zonzi as swiftly and safely as possible, from where the midfield pair would look to get the ball wide to the wingers and overlapping runs of both full-backs. In the final third, the tactic was to get crosses in towards Muriel as quickly as possible, taking advantage of any gaps in the visitors’ defence. It was from a Navas cross that the striker had the best chance of the game, but David de Gea saved brilliantly.

Jose Mourinho’s team adopted a 4-3-3 system in attack, dropping back to 4-1-4-1 in the defensive phase, with Nemanja Matic sitting in behind the midfield line. Their medium block made life difficult for the Sevilla back four in possession, as they went man for man with an intense pressing game across the middle. This press was more cautious, however, after an early injury forced the withdrawal of Ander Herrera and the introduction of Paul Pogba.

Out of possession, it was initially the job of Herrera and Scott McTominay to stay tight on the two Sevilla playmakers, respectively Steven N’Zonzi and Ever Banega. After Herrera’s departure, McTominay switched sides to cover N’Zonzi, with Pogba tasked with looking after Banega – but the Frenchman rarely challenged his opposite number closely enough, allowing him to initiate much of the home side’s forward progress.

United’s shape felt most comfortable when compressed inside their own half, channelling the attacks through packed central areas. McTominay was the standout player in this regard, always pressing the player in possession and working hard to help his teammates outnumber the rival attackers. Chris Smalling and Victor Lindelof had problems dealing with the movement of Luis Muriel in behind, but when the striker did find space in shooting positions he found David de Gea in typically resolute form.

In attack, the away side varied their tactics between direct play into Pogba and combination play inside their own half. Matic and McTominay were the first ports of call in such situations, with Lukaku – whose movement between the Sevilla lines was notable – often the next target. The Belgian combined well with the impressive Juan Mata, whose attacking movement and vision in midfield and the final third represented United’s chief threat. Despite this, they never really managed to unsettle a well-organised and compact Sevilla defence.

David de Gea stood out between the posts, again, for Manchester United. The Spanish goalkeeper kept his team alive with several saves in dangerous one-on-one situations.

Jose Mourinho had to alter his game plan after the injury to Ander Herrera, but substitute Paul Pogba wasn’t as effective in his defensive duties – he too often allowed Ever Banega time and space to start attacking moves for Sevilla.

The Red Devils could only provide a scant offering going forwards. Despite the best efforts of Juan Mata, they failed to create regular situations of uncertainty for Sevilla in the final third, with Romelu Lukaku too isolated.

Sevilla’s wide pairings – Jesus Navas and Pablo Sarabia down the right, and Sergio Escudero and Joaquin Correa on the left – proved effective at carving out openings in attacking areas. It was from a Navas cross that Muriel should have opened the scoring.