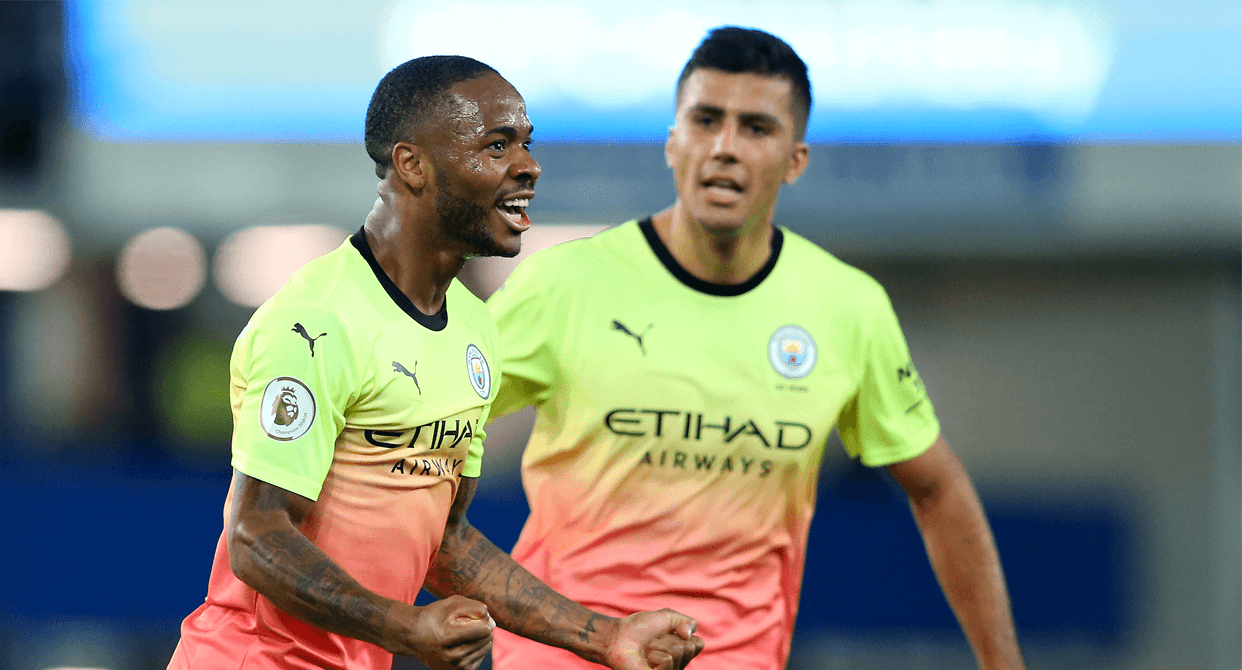 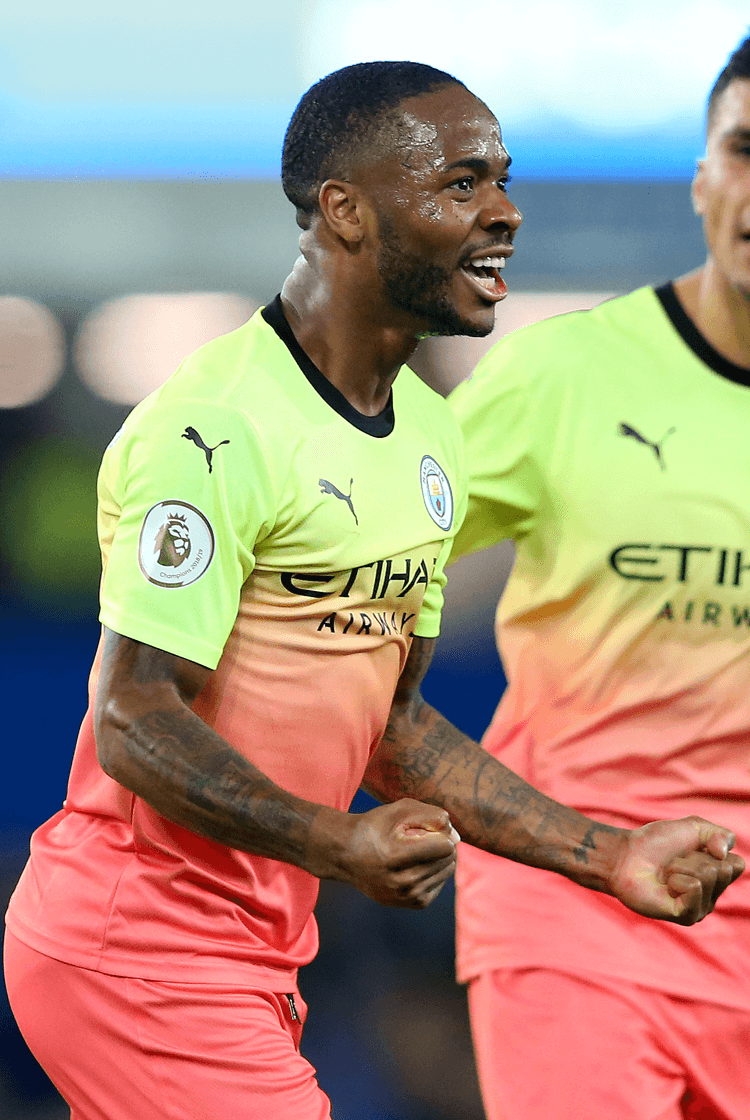 Manchester City maintained their pursuit of Premier League leaders Liverpool with a 3-1 victory at Everton that did little to ease the pressure growing on the hosts’ manager Marco Silva. Gabriel Jesus and Dominic Calvert-Lewin had swapped first-half goals before second-half strikes from Riyad Mahrez and Raheem Sterling secured the win that keeps Pep Guardiola’s men five points behind their title rivals. The visitors have now scored 27 goals in their opening seven league fixtures – the highest total of a team in England’s top division since Everton in 1894/95 – with the influential Kevin De Bruyne providing no fewer than eight assists. 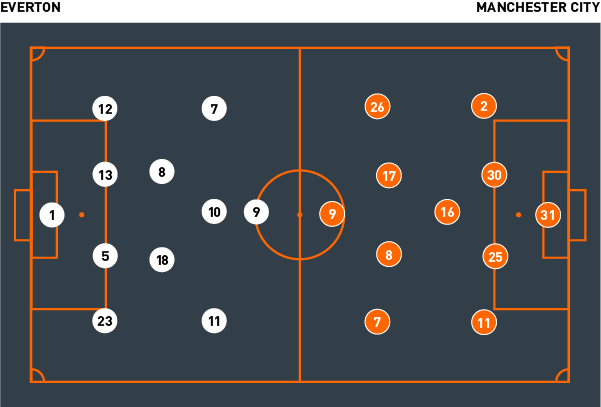 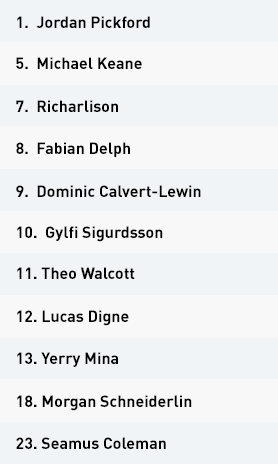 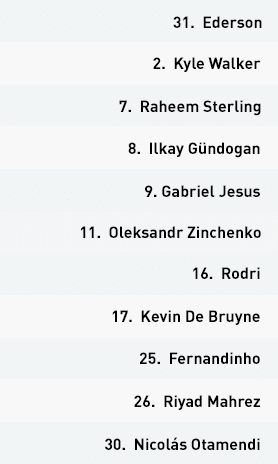 Everton were organised by their manager Marco Silva into a 4-2-3-1 formation while they were in possession. Fabian Delph and Morgan Schneiderlin formed the double pivot in front of their defence, while Dominic Calvert-Lewin started as a lone striker in front of number 10 Gylfi Sigurdsson. They had little possession, however, preferring Manchester City to have the ball in less threatening areas while waiting to steal it and then quickly attack.

When they did build, Jordan Pickford, Michael Keane and Yerry Mina often exchanged short passes before the ball was played long to runs in behind made by Richarlison and Calvert-Lewin; these short passes enticed City in a high press, and by extension advanced their defensive line, ultimately increasing the spaces in behind. If this space wasn’t available, the hosts looked to play through the champions using Gylfi Sigurdsson, who drifted towards the right to receive between the lines on the blindside of Ilkay Gündogan. Seamus Coleman, Sigurdsson and Richarlison, who moved over to the right after the early withdrawal of the concussed Theo Walcott, collectively posed the hosts’ greatest threat, by combining to create an overload against City’s left-sided pair of Raheem Sterling and Oleksandr Zinchenko.

Coleman attempted to position himself beyond Sterling, so that if he received possession Sterling would already have been beaten. Everton then attempted to play crosses from deeper territory or look for combinations to move beyond Zinchenko; their finest chances came from this area, including that which brought an equalising goal made by Coleman for Calvert-Lewin.


City adopted a 4-4-2 shape when they were out of possession, with Riyad Mahrez and Sterling withdrawing alongside Rodri and Gündogan, while Kevin De Bruyne advanced to join Gabriel Jesus in the final third.

They pressed Everton high up the pitch in the initial phases of build-ups, but Gündogan’s hesitation in moving from Morgan Schneiderlin to Sigurdsson often undermined those efforts. Schneiderlin was not prevented from receiving the ball freely because it was often bounced to him via Coleman. The visitors therefore adjusted to a mid-block, even though this presented them with the difficulty of negating Sigurdsson when he moved between the lines.

When in transition, however, City’s typically effective counter-press forced Everton to clear early and often gift possession back to the visitors.

Manchester City used Pep Guardiola’s favoured 4-1-4-1 formation, led by lone striker Gabriel Jesus, while they had possession. Everton’s organised mid-block made it difficult for them to penetrate in central areas, so they attempted to use rotations out wide to draw defenders out of position.

In the earliest phases of their build-ups, they struggled to find Rodri because he was monitored by Gylfi Sigurdsson and Dominic Calvert-Lewin. With both full-backs covered by Everton’s shuffling midfield lines, Rodri therefore withdrew between or outside central defenders Nicolás Otamendi and Fernandinho to create a three-on-two against the hosts’ attack before advancing possession and drawing individuals from Everton’s midfield.

With Kevin De Bruyne also withdrawing to receive possession from a position in which he could face forwards and dictate play with his exceptional vision and ball-playing abilities, Marco Silva’s hosts were vulnerable. If they followed De Bruyne into those areas, Riyad Mahrez would move to receive between the lines; so the Belgian was given time and space, from where diagonal passes posed a greater threat because Kyle Walker was encouraged to advance beyond Richarlison.

If City could find one of their attackers between the defending full-back and central defender, they attempted to deliver first-time crosses aimed at Jesus and any supporting runners. They are increasingly sending their right-sided wide attacker – in this game Mahrez – outside their full-back, however. From there, he can play to the withdrawing De Bruyne, who in turn delivers into the penalty area – just as happened for the Jesus goal that opened the scoring midway through the first half.

Similarly to City’s defensive approach, Everton used a 4-4-2 when out of possession; Sigurdsson and Dominic Calvert-Lewin formed their front two, while Richarlison and Alex Iwobi withdrew and tucked in. Instead of targeting their visitors’ weakened central defence, they positioned Sigurdsson and Calvert-Lewin either side of Rodri to prevent him from creating. They also resisted moving wide to chase the ball, in favour of monitoring De Bruyne and Gündogan and attempting to trap City as they tried to play possession wide.

Calvert-Lewin had a further contribution in screening passes sent backwards and to Fernandinho’s feet, in the pursuit of keeping City wide and therefore posing less of a threat. When crosses were played, the authoritative Yerry Mina impressed in moving to block them – although he was powerless to stop the exquisite De Bruyne ball from which Jesus opened the scoring.