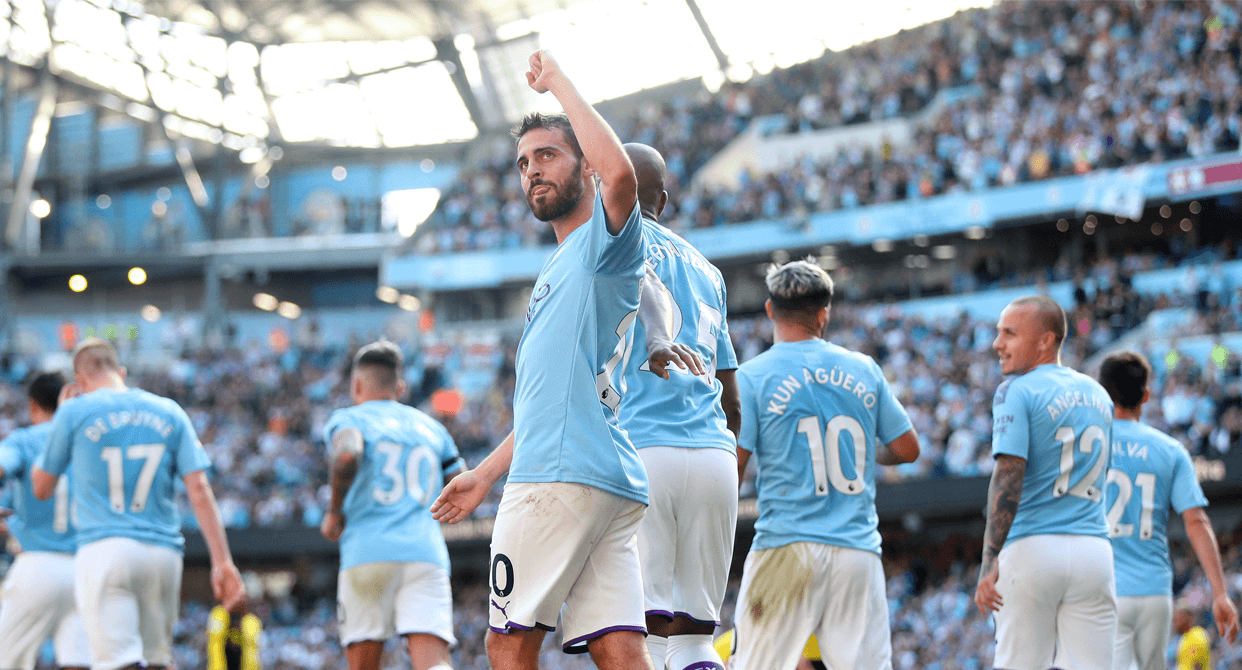 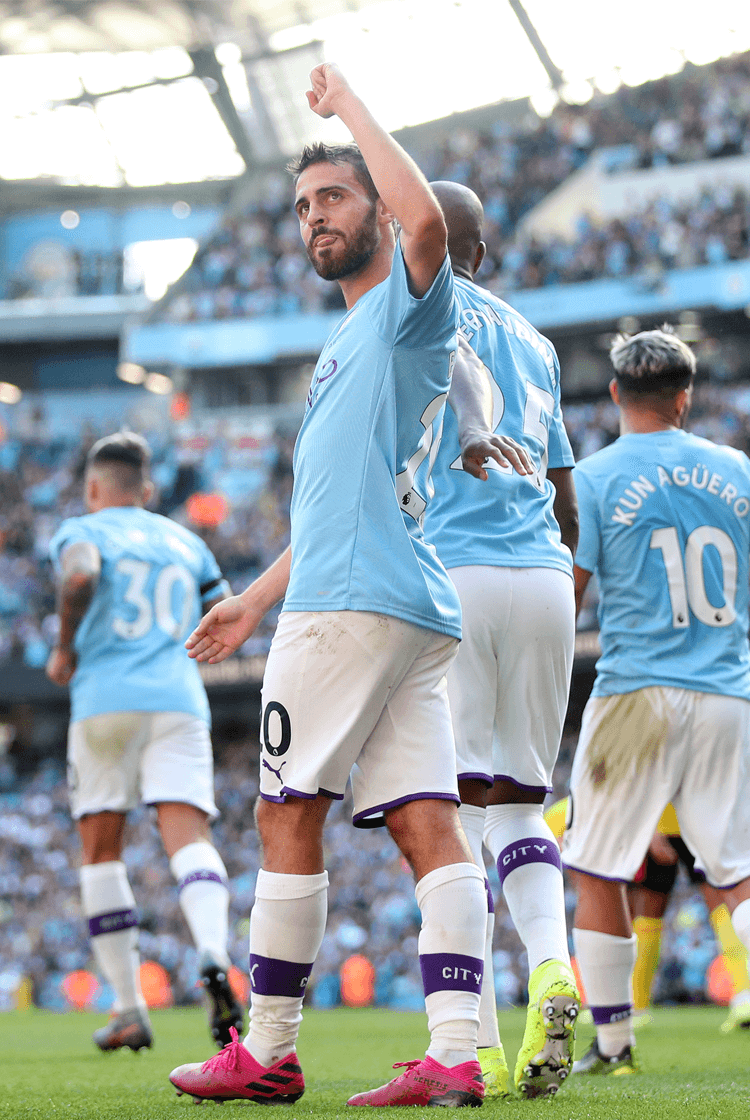 Manchester City scored five goals in the opening 18 minutes as they outclassed Watford to keep pace with Liverpool at the top of the Premier League. Their visitors, who City thrashed in May’s FA Cup final, had been lifted by recovering from two goals down to draw with Arsenal in Quique Sánchez Flores’ first match back as manager – but they offered little fight as City threatened to match Manchester United’s Premier League record 9-0 win over Ipswich in 1995. Bernardo Silva scored his first City hat-trick as the hosts built a significant goal-difference advantage over Jürgen Klopp’s leaders. 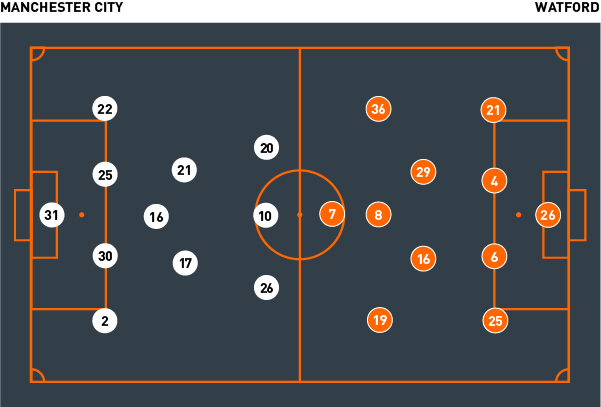 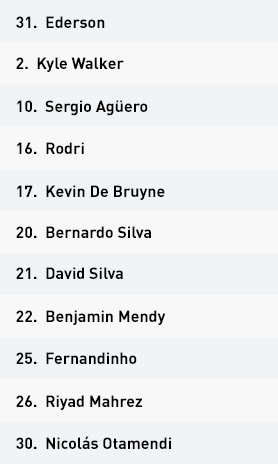 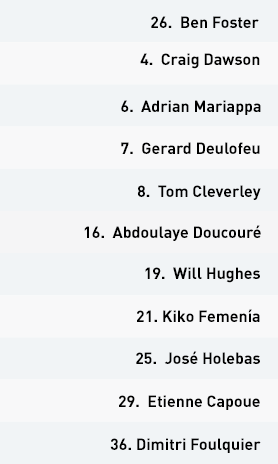 Pep Guardiola favoured a 4-3-3 led by the front three of Riyad Mahrez, Sergio Agüero and Bernardo Silva as Manchester City looked to recover from their surprise defeat by Norwich. They scored inside the opening minute, and in a way that was to recur all afternoon. Kevin De Bruyne sought to draw Abdoulaye Doucouré away from the centre of the pitch to create space further forward. When possession then progressed, Doucouré followed it, freeing De Bruyne up to deliver decisive passes and create. It was City’s off-the-ball movement that proved their greatest threat.

They were particularly fluid, and used that movement to draw their opponents out of position, create space elsewhere and then attempt to penetrate. In the earliest phases of their build-ups, either De Bruyne or David Silva withdrew towards possession. Etienne Capoue and Doucouré were determined to prevent them from receiving and turning, even when they were 70 yards from goal, so would track them into those withdrawn areas. If De Bruyne or David Silva wasn’t in possession, they would advance beyond the Watford midfield to receive the next pass. Alternatively, Mahrez or Bernardo Silva would advance, drawing the Watford defenders they would then attempt to beat one-on-one.

The recalled Benjamin Mendy also advanced to contribute to those rotations. The left-back found positions from which to cross during the first half, but these ultimately proved ineffective and, when Watford formed a low block in the pursuit of damage limitation, City again turned to De Bruyne’s ability to create from deep positions their opponents became reluctant to move into.

Similarly in the second half, with Watford more compact and less man-oriented, City again looked for spaces out wide, via diagonal passes intended to switch play. They also used both full-backs wide and their wide attackers inside, so that when the full-back moved inside, drawing Watford’s wide midfielder, either Bernardo Silva or Riyad Mahrez could be found in space. The influential De Bruyne continued to create, moving on Doucouré’s blindside to gain increased time and space on the ball.


Watford used a 4-4-2 shape when out of possession; Tom Cleverley and Gerard Deulofeu operated as the front two ahead of a four-strong midfield of Will Hughes, Capoue, Doucouré and Dimitri Foulquier. They attempted to remain compact to prevent City’s midfielders from freely receiving possession, but their eagerness to press those midfielders meant them overlooking spaces in threatening areas and struggling with City’s rotations.

When Deulofeu and Cleverley tried to restrict possession into Rodri, De Bruyne and David Silva withdrew, drawing Doucouré and Capoue further from defence and undermining that compactness.

Regardless of the visitors leaving spaces, it was their responses – and work from restarts – that proved most damaging. David Silva’s first-minute goal was followed by four more that came via a penalty, a corner and two free-kicks, with Watford lacking either organisation or readiness.

After City’s fifth goal, the visitors adopted a lower block and were less eager to chase and press their opponents, restricting their spaces and largely limiting them to shots from distance and crosses from wide areas that they coped with until half-time. They also had limited success when pressing high while Ederson was in possession, but they again reverted to withdrawing and attempting to remain compact in what was ultimately a desperate defensive performance.

While in possession, Watford were organised into a 4-2-3-1 formation by manager Quique Sánchez Flores. Etienne Capoue and Abdoulaye Doucouré operated as the double pivot within midfield. They were reactive with the ball, however, so only played as City’s structure encouraged them to instead of attempting to pursue their own approach.

A significant lack of movement in central areas contributed to Watford playing the longer passes Deulofeu struggled to win; even if Capoue and Doucouré were instructed to collect the second ball and attack, City either won the second ball or applied such pressure to it that it was returned to Ben Foster, who would trigger the same pattern with another long pass.

The visitors’ only attacking threat came in transitions, when they attempted to play forwards early by sending Deulofeu in behind, from where he had chances to score when they were only a goal down. He was supported by forward runs from Will Hughes, Tom Cleverley, Dimitri Foulquier and later substitute Roberto Pereyra during those transitions.

Similarly to Watford, City used a 4-4-2 when out of possession, which involved David Silva joining Sergio Agüero in a front two. The pressing angles of David Silva, Agüero and De Bruyne, and Rodri’s pressure on Watford’s central midfielders, prevented them from turning and therefore undermined their attempts to play penetrative passes.

City sought to encourage Watford towards the touchline, where they would surround the receiver with a full-back, winger and central midfielder from that side, forcing him against the touchline and preventing him from playing possession. Even at 5-0 up they continued to implement an intense counter-press, surrounding the ball-carrier from several angles and either immediately regaining possession or forcing him into making a rushed or inaccurate pass.