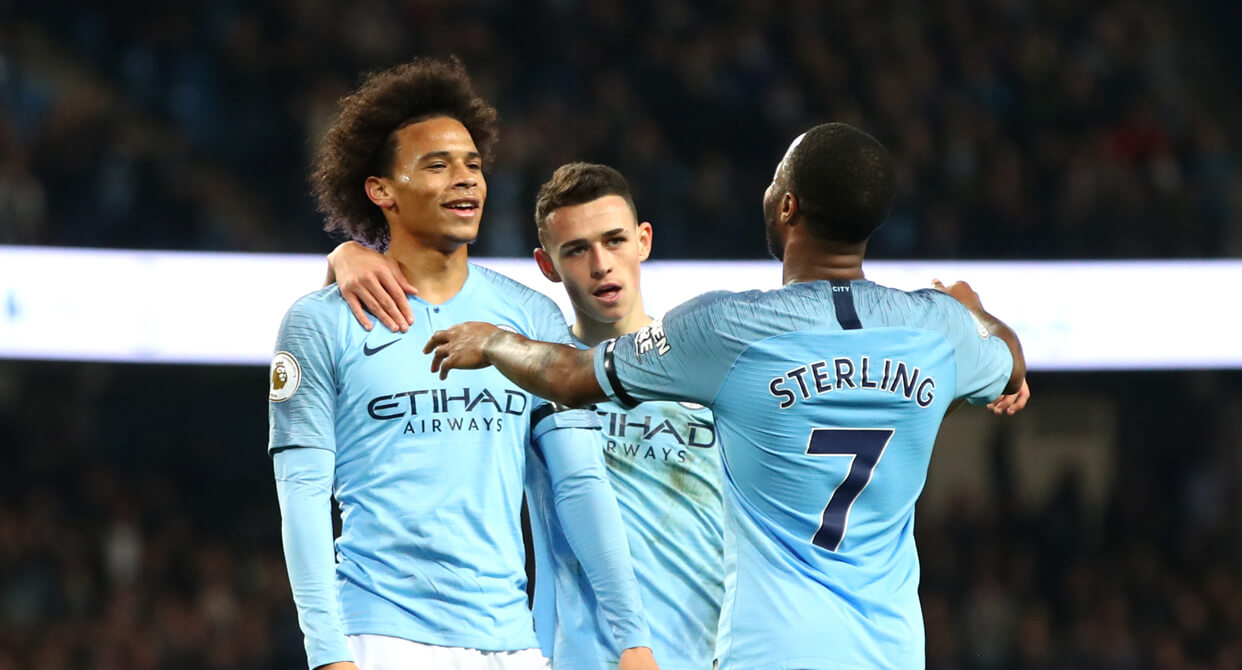 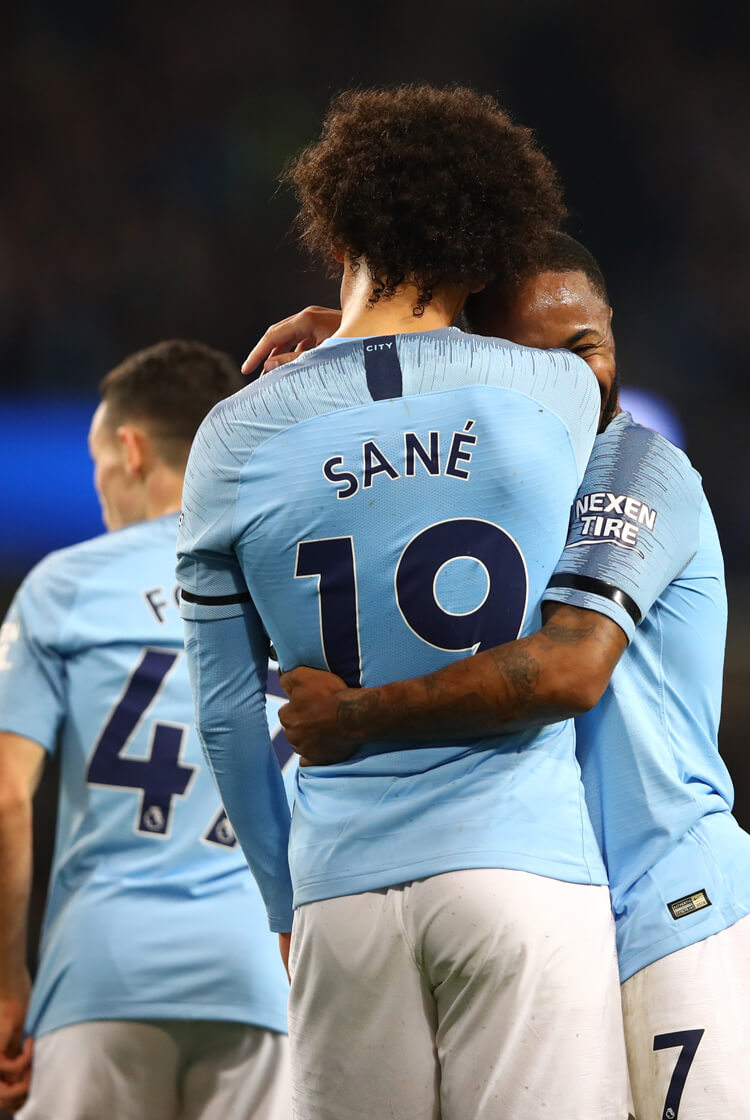 Manchester City returned to the top of the Premier League by thrashing a helpless Southampton side at the Etihad. An own goal from centre-back Wesley Hoedt in the sixth minute set the tone for the encounter, with Sergio Aguero, David Silva and Raheem Sterling also getting on the scoresheet in the first half to give Pep Guardiola and his players a comfortable lead at half-time. Danny Ings did pull one back from the spot at the half-hour mark after being brought down by goalkeeper Ederson, but his finish was quickly forgotten. Sterling scored his second of the game midway through the second period, before Leroy Sane completed the rout in injury time. 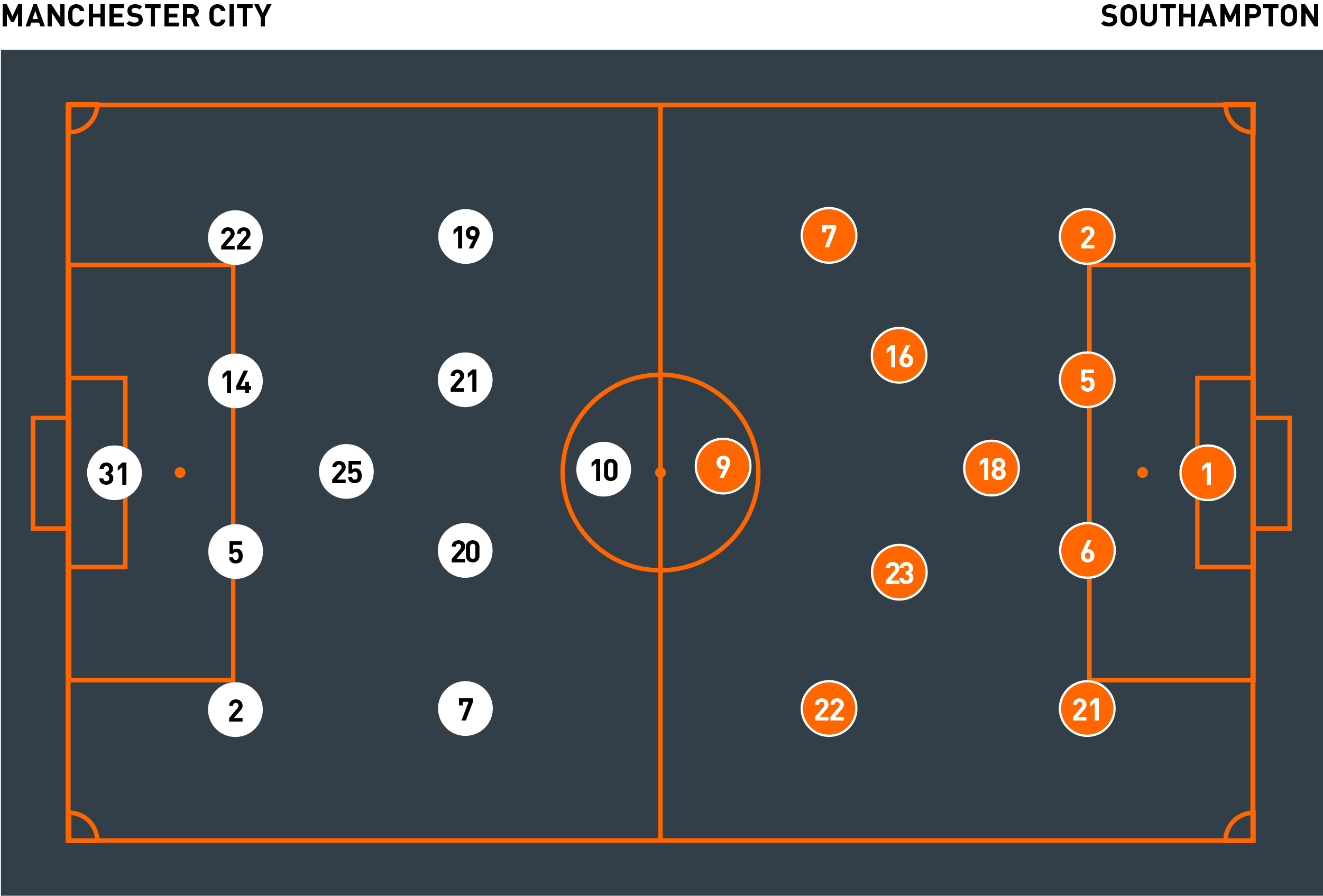 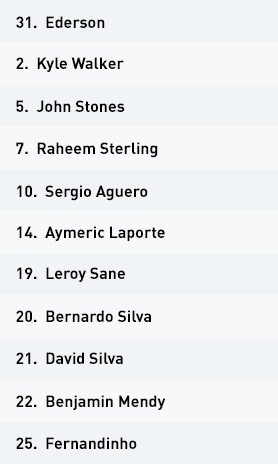 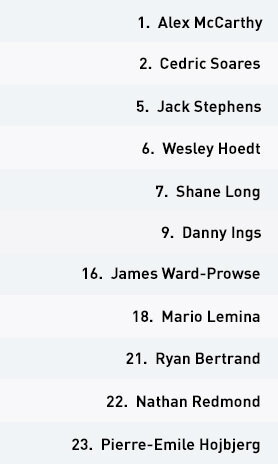 City set up in a 4-1-4-1 attacking shape in possession, with Raheem Sterling, Leroy Sane, Bernardo Silva and David Silva operating ahead of Fernandinho and behind Sergio Aguero.

City looked to dominate possession and create overloads in the wide areas and half-spaces to penetrate Southampton’s out-of-possession structure. To do this, they generally looked to use groups of three or four players – typically the wide attacker and inside attacker, along with the full-back and centre-back on that side.

Within this diamond structure they would utilise a variety of movements to separate the Saints. These movements were typically designed to draw players to the ball and away from the man, attracting the press before moving to create a passing lane that would take the opponent out of the game.

Against the pressing of Southampton, this was straightforward in the first half, but it became more difficult in the second period when the visitors changed their structure.

In the first half, City would try to get Nathan Redmond and Shane Long to press their centre-backs, at which point they would merely bounce the ball into Fernandinho and out to full-backs Kyle Walker or Benjamin Mendy. The aforementioned pair couldn’t be marked by midfielders Pierre-Emile Hojbjerg or James Ward-Prowse as they were busy dealing with David Silva and Bernardo Silva. Cedric Soares and Ryan Bertrand were similarly tasked with taking care of Sane and Sterling.

The principle in the second half remained the same in terms of attracting pressure and ensuring the opponent lost sight of their man, but City started to play around rather than through, bringing Mendy inside and dropping the wide attacker much deeper. While this approach didn’t necessarily take the wide opponent out of the game, it presented Sane with the option of getting on the ball and beating the wide midfielder, or playing inside to David Silva who would advance as Mendy moved inside.

Similarly, Aguero could be seen dropping into the midfield areas and receiving the ball – this would again attract Southampton midfielders towards him and free up spaces elsewhere for his teammates.

City would look to counter-press immediately after losing the ball and did so with high intensity and numbers, often forcing an immediate regain or a mistake. If the counter-press was broken, or their opponents moved the ball backwards to a point that was too far to continue the pressure without the ball being switched, they would drop into a 4-1-4-1 mid-block, generally taking up the same positions as their in-possession structure.

With their lead so comfortable, they opted for the mid-block in the second half. In favouring this defensive tactic over sprinting after the ball, they were able to preserve energy and ultimately add to their lead. They would typically wait for a pressing trigger, such as a slow, horizontal pass or even a pass into an opponent who was marked, at which point they would initiate high pressure again.

Southampton set up in a 4-3-3 in possession with Mario Lemina, Pierre-Emile Hojbjerg and James Ward-Prowse as the midfield three, behind Nathan Redmond, Shane Long and Danny Ings in attack.

The Saints predictably had limited time in possession, but when they did have the ball they would attempt to play out and through midfield to build their attacks. Their primary strategy was to try to exploit the areas in behind the Manchester City full-backs, either through building the ball into these areas and then running from deep, or through playing early in behind for the runs of Redmond, Ings and Long.

On the occasions they did manage to evade City’s counter-press, they would look to switch the play quickly and take advantage of their opponents’ numerically weaker side through the opposite winger and full-back.

The Saints saw more of the ball when the hosts fell back into a mid-block, but they still struggled to break them down. In these situations, they would push their full-backs on either side to have two men outside, or to move their wide attacker inside.

Out of possession, they began in a 4-3-3 high press – in the same positional structure as their in-possession formation. Ings would operate between the two City centre-backs, ready to press goalkeeper Ederson should he get the ball, while Redmond or Long would press the centre-back in possession, depending on which side the play was being built up on. Lemina would look to press Fernandinho from behind, as Ward-Prowse and Hojbjerg would track Bernardo Silva and David Silva, leaving the back four to deal with Sterling, Sane and Aguero.

The objective of the high press was to force City into long passes that the back four could defend. When they pressed, however, they couldn’t cover the passing line into Fernandinho well enough. Lemina would press the Brazilian, but he was helpless to prevent the one-touch pass out to the full-back which was consistently effective in breaking this press.

They switched to a 4-4-2 in the second half, with Redmond dropping into the midfield line. This allowed the front two to apply pressure to the centre-backs, while the midfield four could cover the full width of the pitch.

While this prevented the previous regular occurrence from happening, City adapted by looking to play in between the wide and central midfielders. They would either take them out of the game, if the attacking player was beyond them, or attract one or both of them to the ball, should the attacking player receive between them. This was successful in creating space elsewhere for the next move.

Southampton were simply unable to cope with the fluidity and movement of City’s attacks, regularly finding themselves outnumbered and pulled out of position. Pep Guardiola’s players were also at their most ruthless in front of goal, giving the visitors little chance of shocking the Etihad and ending a winless run of now seven league games.