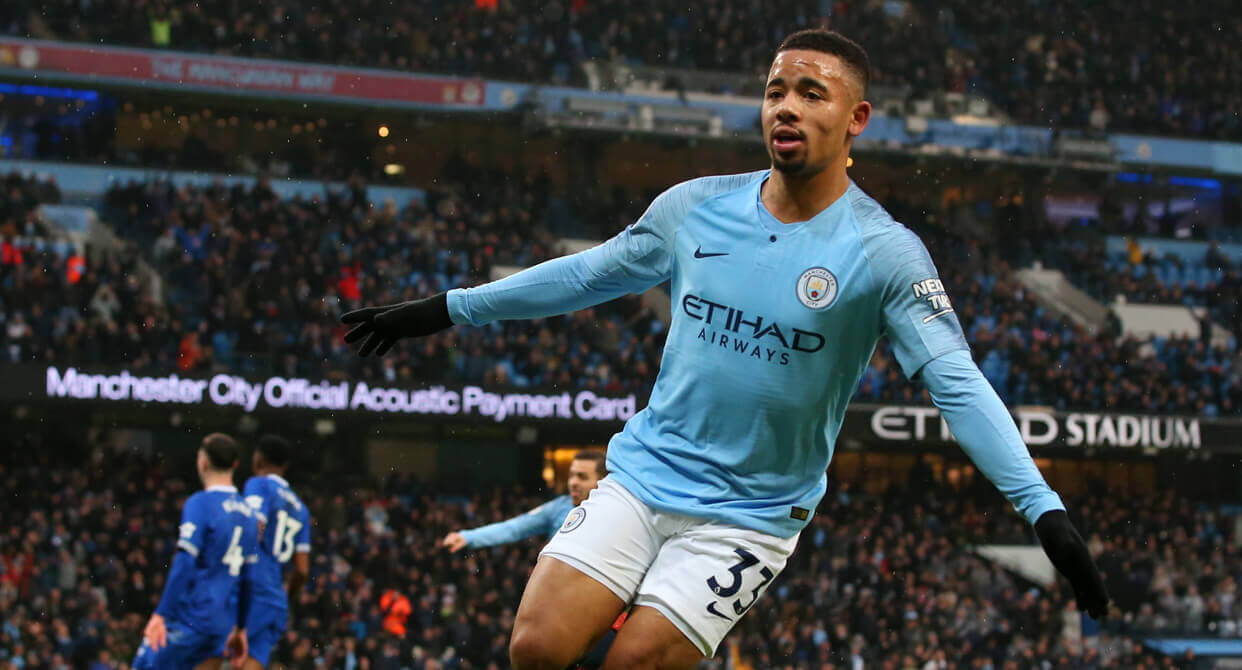 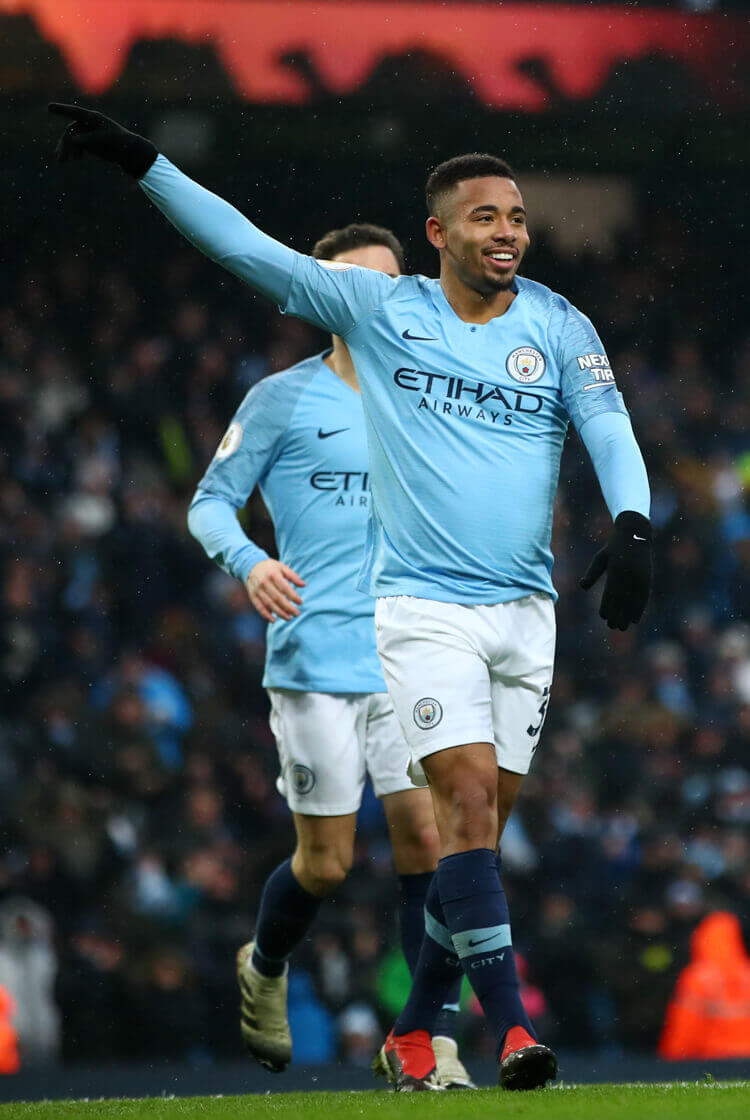 Manchester City bounced back from the disappointment of defeat at Chelsea with a convincing home victory over Everton to temporarily dislodge Liverpool from top spot in the Premier League. Gabriel Jesus was the hosts’ tormentor-in-chief, twice assisted by the in-form Leroy Sane in scoring his first league goals since way back in August. The visitors didn’t always help themselves in possession – the move for Jesus’ first originated in a poor ball forward from Yerry Mina – but they gave themselves hope when Dominic Calvert-Lewin headed home a Lucas Digne cross midway through the second half. That hope all but disappeared within moments, however, as Raheem Sterling placed a simple header past Jordan Pickford not long after coming on as a substitute. 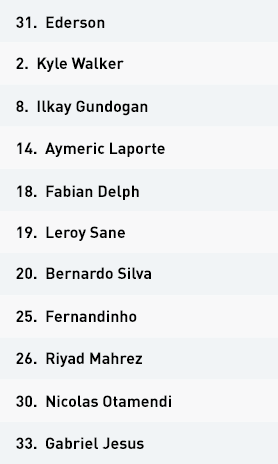 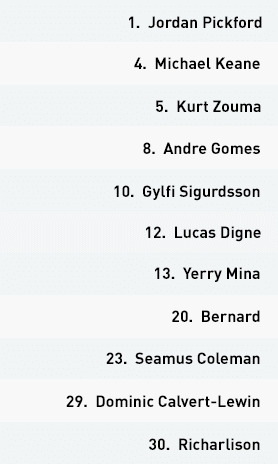 Pep Guardiola set his Manchester City team up in an attacking 4-3-3 structure, with both wingers – Riyad Mahrez and Leroy Sane – providing maximum width to try and stretch Everton’s back line. From here, central midfielders Ilkay Gundogan and Bernardo Silva supported in the inside channels, looking to receive splitting passes through the gaps between Everton’s wide and central midfielders on both sides of the pitch.

As City full-backs Kyle Walker and Fabian Delph looked to move inside, their central midfielders eventually moved into much higher positions behind Everton’s midfield unit. From here, they would create a three-on-three against their centre-backs, and a five-against-five in total, with the wingers continuing to play high in the wide areas. Everton’s central defenders couldn’t let the likes of Gundogan or Bernardo Silva receive and turn with the ball, so they had to step out with them. This created the gaps to play their wide attackers – particularly Mahrez on the right – in behind.

With Everton man-marking at the back, the hosts created their best spell of quick passing combinations and rotations, and repeated penetrations into the penalty area. The visitors simply couldn’t track all of City’s electric movements, and it was no surprise when the hosts moved ahead. Their high press forced Yerry Mina into a poor ball forward, from which Sane eventually played Gabriel Jesus in behind to finish low at the near post.

The hosts maintained their dominance, characterised by slick passing and off-the-ball movements, well into the second half, and soon doubled their lead. Jesus positioned himself cleverly between the Everton centre-backs, and headed home Sane’s inch-perfect cross from close range.

Everton shifted formation to a 4-4-2 and did temporarily reduce the deficit, but the hosts continued to look to Sane and Mahrez in wide areas, with the full-backs now moving higher as well. In the end, it was from another cross – this time from Fernandinho – that substitute Raheem Sterling headed home City’s decisive third.

Out of possession, City utilised a high pressing strategy if Everton built short from Jordan Pickford. However, only their front three stepped higher to apply pressure – their strategy was to press and force a long pass, rather than press to regain possession. Mina was a constant target; any time the Colombian defender had the ball within Everton’s defensive third, City increased the intensity of their press. This encouraged the longer ball into lone forward Dominic Calvert-Lewin, against whom the hosts often had a two-on-one overload.

Should Everton play long from goal-kicks or open play, then City utilised a 4-3-3 mid-block strategy and counter-pressed any loose or second balls. Both full-backs stepped inside to assist the press, turning a four-on-three overload in the visitors’ favour into a five-on-four overload for City – this was particularly useful if the hosts’ wingers hadn’t recovered back into the midfield unit.

With Man City pushing their full-backs into more attacking positions in the second half, their recovery back into central positions wasn’t as essential. This did contribute to Everton’s goal on the day, as Calvert-Lewin headed home a cross from Lucas Digne wide on the left, but the hosts controlled late possession after Sterling had re-established the two-goal cushion and saw out the victory in relative comfort.

Marco Silva set Everton up in a 3-4-3 formation, with Dominic Calvert-Lewin brought in as a lone striker and Richarlison operating from wide on the right. Gylfi Sigurdsson dropped alongside Andre Gomes in midfield, with Seamus Coleman and Lucas Digne providing the width from wing-back.

During their brief spells of attacking possession, they began by looking for Calvert-Lewin, who drifted to either side and away from the hosts’ central overload. With the City full-backs moving inside, Calvert-Lewin created space to receive early passes forward and worked to isolate the centre-backs in one-on-one duels. However, the young forward lacked supporting runners against a defence that worked hard in recovery.

Everton briefly made use of clipped balls in behind the City full-backs, with both Richarlison and Bernard making penetrative runs in behind. These may have been decoy movements, however, as the visitors had success when their wing-backs made second runs just as the hosts’ defence was beginning to step forward. The second run from Digne on the left was particularly advantageous, as he gained momentum by beginning his run much earlier than the much quicker Kyle Walker against him. A lack of supporting movements in the City box limited Everton’s threat from these areas, although Richarlison blazed over with his one excellent chance when breaking in from the right.

Having seen his team drop two goals behind, in no small part thanks to their own errors in possession, Silva reacted by bringing on Theo Walcott and Ademola Lookman and switching to a more offensive 4-4-2 shape, with Richarlison joining the so far isolated Calvert-Lewin in attack.

Even with a second forward ahead of the ball, Everton struggled to hit their front pair on the break. Fernandinho blocked off all central access, meaning they had to transition using the wide areas. This actually worked to their benefit, when Calvert-Lewin headed in Digne’s looping cross after City failed to clear their lines. Walcott, Richarlison and Sigurdsson all had opportunities created down Everton’s left but, as with their recent trip to Anfield, they left with more positives than points.

Out of possession, the visitors utilised a 5-4-1 mid-block. Their wing-backs – Digne and Seamus Coleman – tightly marked the hosts’ wingers, with the closest centre-back moving across to cover the gap in case of through balls in behind. With City only deploying one central striker, Everton were able to double up on the hosts’ wide players without compromising central strength.

This luxury faded when City pushed their central midfielders higher, however. From here, Everton’s centre-backs were forced to engage – and this created the gaps the home side had been searching for, particularly down their left. The visitors struggled once they adapted to a man-marking structure, as quick rotations made it difficult to consistently mark Man City’s fluid attacking shape.

Despite setting up to play out from the back and creating a seven-on-six overload in their own half, it was a mistake from Yerry Mina in exactly this situation that led to City’s opener – his long pass was cut out by Ilkay Gundogan, who freed Sane to take advantage of Everton’s open back line and cross for Jesus. The same pair combined for the second, again created from the City left, before Silva removed Coleman from the fray and pushed Kurt Zouma to right-back in a newly formed back four. This made the visitors a greater attacking threat but weaker defensively, as yet another cross from the left led to Raheem Sterling scoring the City third and ending any hope Everton had of getting anything from the game.