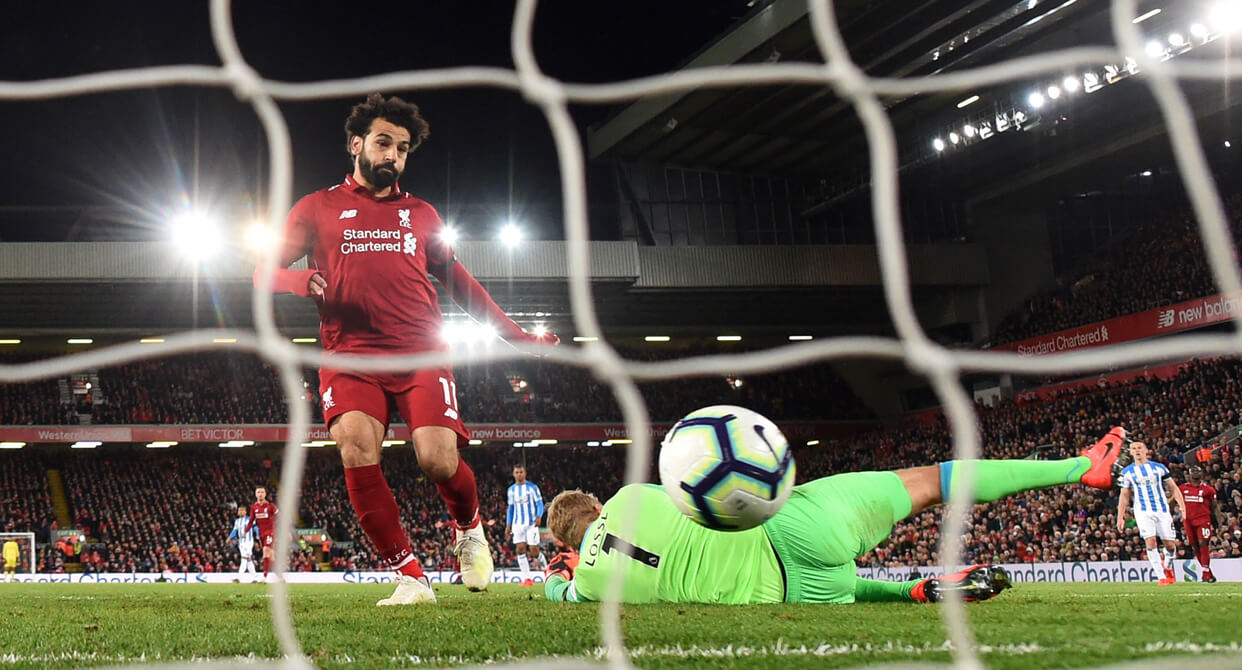 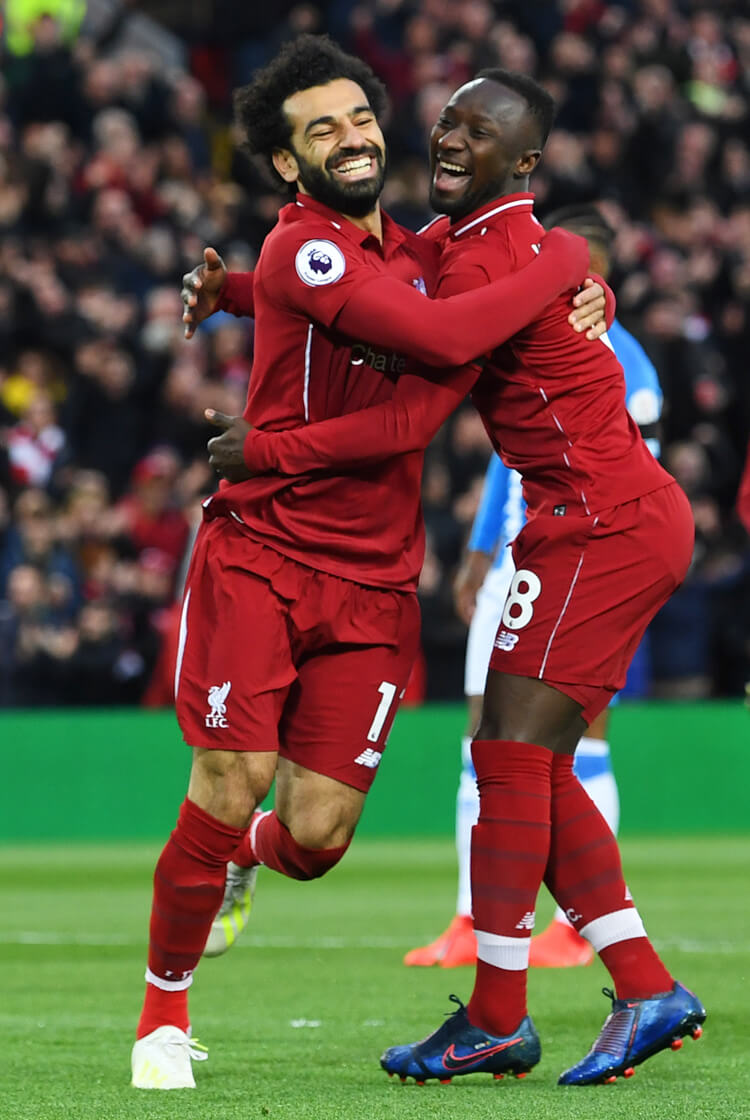 Liverpool maintained the pressure on Premier League leaders Manchester City with a predictably comprehensive home win over already-relegated Huddersfield on Friday night. Any hope the visitors had of taking anything from the game back to Yorkshire disappeared in the first minute, when the hosts won the ball high and Mo Salah played in Naby Keita for his first Premier League goal at Anfield. The visitors had the odd moment or two on the break, but Sadio Mane headed a second halfway through the first half and Salah stole in for a third with half-time looming. Both Mane and Salah struck again in a one-sided second half, as the Reds improved their goal difference – but Manchester City’s Sunday afternoon defeat of Burnley means Jurgen Klopp and his team are still the hunters with only two games of the season left. 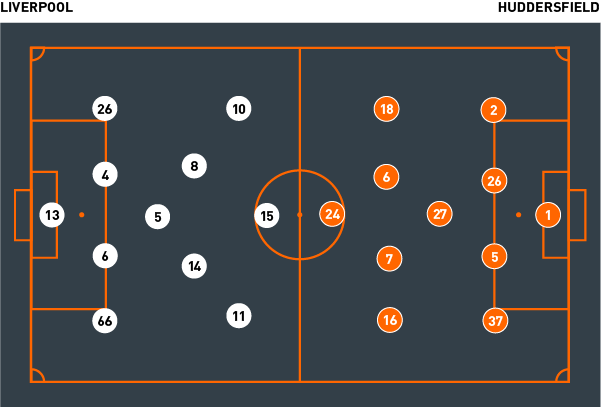 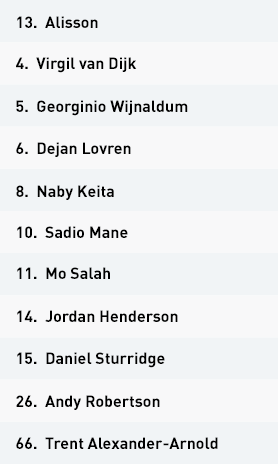 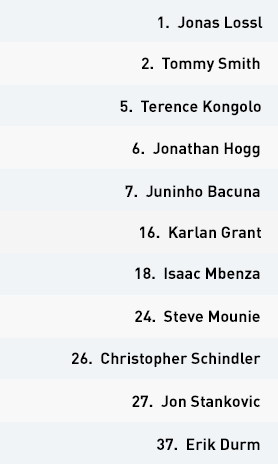 Jurgen Klopp set Liverpool up in a 4-3-3 formation, with Georginio Wijnaldum, Naby Keita and Jordan Henderson as a midfield three behind Sadio Mane, Daniel Sturridge and Mo Salah. The Reds dominated possession throughout, and initially found it extremely easy to bypass the front two in Huddersfield’s press using a diamond consisting of the two centre-backs, goalkeeper Alisson and Wijnaldum. As one of Huddersfield’s two central midfielders then moved out to press Wijnaldum, he was able to slip the ball into whoever of Keita or Henderson had been left free.

After Huddersfield adjusted their defensive structure to a 4-1-4-1, Liverpool had to be a little more creative with how they tried to play through. Salah could often be seen pulling wide to create space for Henderson to run through, while the hosts also looked to play in behind early for the runs of Salah and Mane. The pacy Liverpool attackers would often take up positions four or five yards in front of the Huddersfield defensive line, giving them a choice – should they step up to close them down and prevent them receiving to feet, or drop off to protect the space in behind? It was from such a starting position that Salah started the run from which he scored his first, and Liverpool’s third, just before half-time.

With Huddersfield working to protect the middle, Liverpool looked to exploit the wide areas. Here, full-backs Andy Robertson and Trent Alexander-Arnold were key, operating behind Huddersfield’s wide midfielders and causing the full-backs, who also had to worry about Salah and Mane, real problems. The hosts also used their forwards to drop into midfield areas and create overloads, compacting Huddersfield even more and creating increased space in wide areas. As usual, they also looked hugely threatening in transition, using the wide areas to create two-on-ones against Huddersfield’s full-backs.

Out of possession, Liverpool operated in the same 4-3-3 structure as in possession. They pressed high from the start and got their reward as early as the first minute, when Keita slotted home the opener after a high regain. Mane and Salah pressed the Huddersfield centre-backs, while Sturridge remained with Jon Stankovic. If the ball was played back to Jonas Lossl, then Sturridge would jump to press him, with Keita jumping on to Stankovic.

The high intensity of Liverpool’s press forced Huddersfield into significant errors, so the visitors ended up clipping most of their passes forward from deep as the game progressed. With Liverpool overloading the middle of the pitch, they were always in a good position to counter-press, regularly winning the ball back within seconds. The hosts did look slightly vulnerable in transition, but the work rate of their midfield to recover and deny Huddersfield time and space on the counter prevented the visitors from creating anything of great significance.

Jan Sievert set Huddersfield set up in a 4-1-4-1 formation in possession, with Jon Stankovic sitting between the defensive and midfield lines. Isaac Mbenza, Jonathan Hogg, Juninho Bacuna and Karlan Grant formed the midfield four behind Steve Mounie, who led the line.

The Terriers initially tried to build possession from the back, with Stankovic looking to link play – but they found themselves suffocated near their own goal and were punished for trying to play out from the back with an early goal. As a result, goalkeeper Jonas Lossl looked to send balls further up the pitch and targeted Mounie with direct passes – but they managed only 31 per cent possession and struggled to create anything of significance from either approach.

Instead, their threat appeared to come in transition. Upon regain, Mbenza and Grant would release themselves from their position as wide midfielders and look to exploit the spaces inside the Liverpool full-backs – although Liverpool’s counter-press was frequently too strong and Huddersfield struggled to counter from deep areas. They were more dangerous when regaining the ball high, more through Liverpool’s lack of attention to detail in their passing than through any great pressing. These situations led to Huddersfield’s best chances of the game, although with only one shot on target across the 90 minutes, they hardly had Alisson worried in the Liverpool goal.

Out of possession, the visitors initially set up by trying to press in a 4-4-2, with Grant joining Mounie on the top line. This structure proved far too straightforward for Liverpool to play through, so they adjusted into a 4-1-4-1 and were able to even the numbers up in midfield, with Stankovic, Hogg and Bacuna taking responsibility for Henderson, Wijnaldum and Keita.

When forming their mid-low block in the 4-1-4-1, Huddersfield were happy to let Liverpool centre-backs Virgil van Dijk and Dejan Lovren have the ball; Mounie would simply try to prevent them from passing between each other and force the play out to one side. The trigger for Huddersfield to close down was a vertical pass into the feet of a Liverpool player with his back to goal, although this only drew more men towards the ball and opened up spaces for the hosts to advance elsewhere.

The Terriers were able to stop Liverpool overrunning them as they had done before the switch to the 4-1-4-1, although they still struggled with the Reds’ forwards dropping and had major issues in wide areas. Mbenza and Grant were fine when the Liverpool full-backs were in front of them, but as soon as they moved beyond them they were unsure whether to follow them or pick up the inside midfielders. The result was often that Liverpool engineered two-on-ones against the visiting full-backs – particularly down the Huddersfield right, where Robertson found lots of space to create goals for both Mane and Salah.