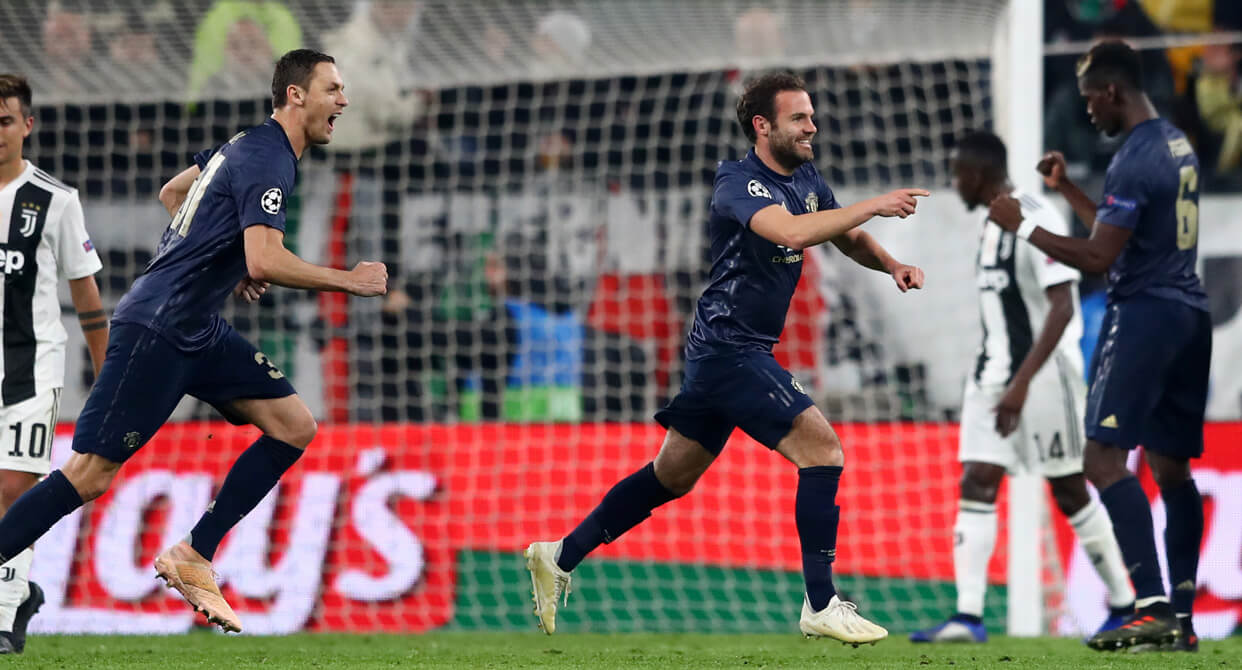 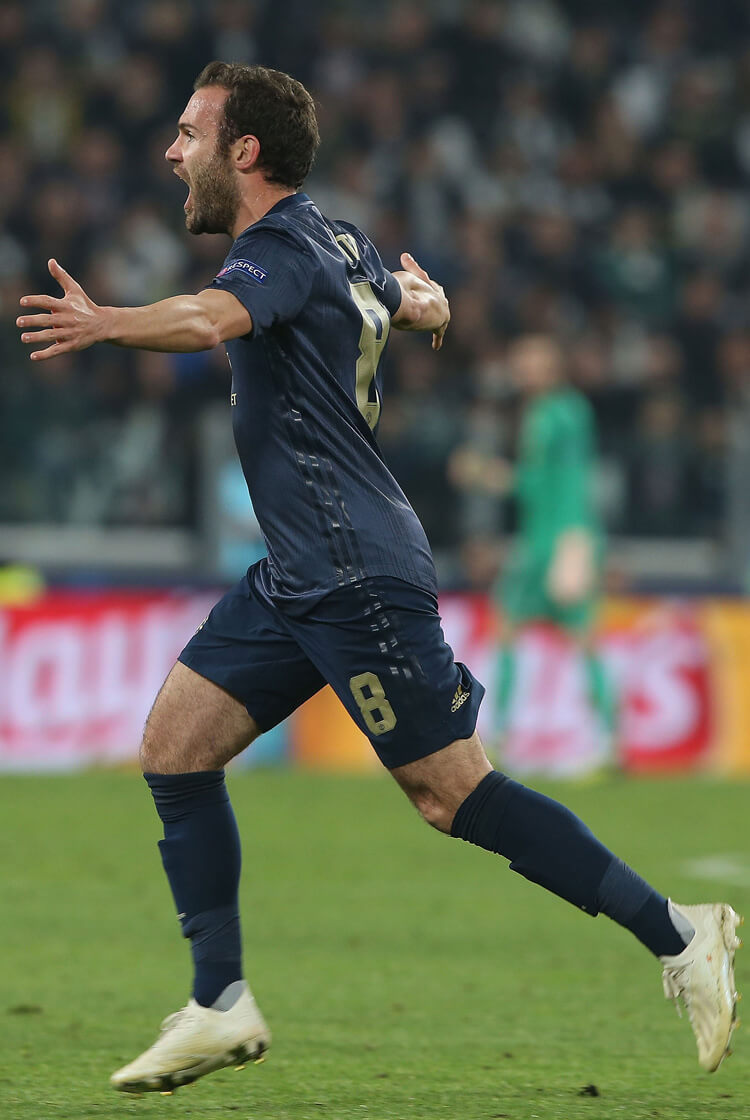 Jose Mourinho cupped hand to ear in the aftermath of a dramatic European night in Turin, as his Manchester United team came from behind to secure a crucial victory over Champions League contenders Juventus. The visitors had given a much better account of themselves than they had against the same opponents at Old Trafford two weeks earlier, but the result looked to be heading the same way when Cristiano Ronaldo struck an outrageous first-time volley past a helpless David de Gea not long past the hour. Ronaldo’s old club survived the subsequent onslaught, however, and Mourinho turned the game with his substitutions: Juan Mata came off the bench to equalise with a superb free-kick, while Marouane Fellaini was at the heart of the penalty area shambles that led to a dramatic winner with full-time looming. United are now in control of their own destiny and look favourites to join the Serie A champions in the last 16. 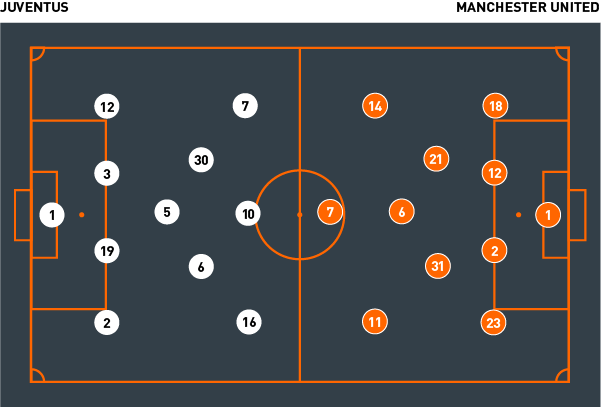 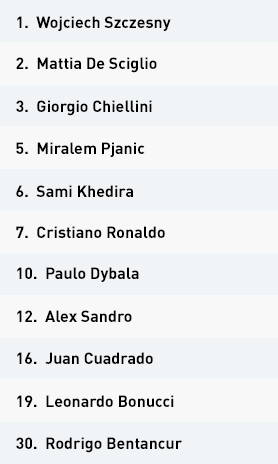 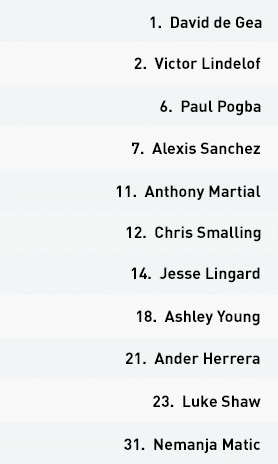 Juventus changed systems at various points during the game, asking different questions of Manchester United’s defensive block. They converted into a 4-3-3 structure in the first half, with Cristiano Ronaldo, Paulo Dybala and Juan Cuadrado forming a consistently rotating front three. With Ronaldo mostly attacking inside from the left, Juve looked to left-back Alex Sandro to provide attacking width and crosses from that flank.

Movements from Cuadrado and Dybala were intriguing – particularly in the first half, with United managing to block Juventus’ forward access. The pair filled the wide areas, but also dropped very deep when their back line had the ball. Ronaldo would stay central, occupying both central defenders, while Cuadrado and Dybala horizontally stretched the visitors’ back line, as both Ashley Young and Luke Shaw tracked them no matter how deep they fell. From here, huge spaces appeared for forward runs from advanced central midfielders Sami Khedira and Rodrigo Bentancur. If the back line couldn’t access these runners directly, they would first use Ronaldo, who would then play the ball around the corner for his midfield runners.

Despite initially finding play on their right side restricted – Mattia De Sciglio’s overlaps were well tracked by Anthony Martial – Juventus did eventually manage to penetrate as the full-back combined with Cuadrado. From here, the latter found the late run of Khedira, but the German’s low effort hit the post.

Penetrative runs forward from Juventus’ central midfielders continued into the second half, creating additional space for Cuadrado and Dybala, who moved behind these runs and thus the ball. The latter soon became the second Juventus player to hit the woodwork, as his dipping effort crashed back off the crossbar. The Juventus right soon became the main source of creation; Ronaldo joined the play from the left, allowing Dybala or Cuadrado to attack the central lane. With United so occupied with Ronaldo, De Sciglio finally had space to overlap.

Juventus eventually took the lead after a simple long ball forward from Leonardo Bonucci was outrageously volleyed home first time by Ronaldo. The former United man’s movements towards the wide areas continued to create central space for Dybala to collect passes between the lines. De Gea then saved well from Pjanic’s low effort, while Cuadrado also fired over from close range. Had either of these excellent chances been taken, it’s unlikely the visitors could have pulled off the comeback they did.

Out of possession, the hosts converted into a 4-4-2 mid-block. Bentancur would move from a left-sided central midfield role in the 4-3-3 to a wide left position in defence, tracking any potential forward runs from Ashley Young. Dybala and Ronaldo formed a central front two, with the latter on the left. Should the hosts create a quick counter-attack, Ronaldo could then pull away from his central marker and attack the goal on the angle.

As United increased the directness of their play with the late introductions of Marouane Fellaini and Marcus Rashford, Juve head coach Massimiliano Allegri switched his defensive set-up into a 3-5-2. Despite adding another defender in the form of Andrea Barzagli, United now had easier access into the wide areas – from where both of their late goals originated.

The away side set up in a 4-3-3 structure, with Alexis Sanchez as the lone striker supported from wide areas by Anthony Martial and Jesse Lingard. Most of the Chilean’s movements were towards the ball and away from the physically dominant Juventus central defence. Ander Herrera and Nemanja Matic formed a double pivot, with Herrera remaining deep in the right-sided central midfield role. Paul Pogba completed the central midfield trio, but he moved much higher than Herrera in trying to link with the retreating Sanchez.

Herrera’s deeper positioning when the visitors had possession was likely due to the presence of Ronaldo on the same side. From here, Juventus found it difficult to quickly access Ronaldo on the break. But United’s attacking play suffered from this, as they lacked numbers ahead of the ball and in the pockets of space around Juventus’ lines.

With the hosts’ narrow defensive structure congesting space around the ball, United’s best form of penetration came via switches of play. These were enhanced by the wide positioning of Lingard and Martial, who linked well with their respective full-backs. However, with Sanchez running in behind for low crosses, the hosts’ back line retreated to kill these spaces. From here, United lacked powerful runners into the box, with Pogba often reticent to attack the penalty area.

Lingard’s inside movements from the right helped Pogba create a more effective link with Martial in the second half. With Lingard taking markers away, the Frenchman found more space – and more short passing options – to link the attacking play with runners. With Juventus then narrowing their defensive shape, Ashley Young stepped higher from right-back, providing width and crosses from that flank.

After a period of Juventus dominance that saw United fall behind and concede a number of further chances, head coach Jose Mourinho introduced Marcus Rashford, Marouane Fellaini and Juan Mata in what remained a 4-3-3 structure. With the hosts changing to a 3-5-2, the away side had easier access into the wide areas, and thus bombarded Juventus with the crosses that eventually led to two goals and a dramatic finish. Mata grabbed the first with a superb free-kick, with Pogba in the mix as United somehow bundled home the match-winning second.


Without the ball, United converted into a 4-1-4-1 structure and formed a mid-block for most of the game. When Juventus built from goalkeeper Wojciech Szczesny, however, they stepped much higher, hoping to restrict the space for Juve’s back line to play out. Despite this, Miralem Pjanic’s skill and craft under pressure in his own defensive third ensured the hosts still progressed out.

As the first half progressed, Martial was forced to work back into a deeper position, nullifying the threat of De Sciglio’s direct overlaps forward from right-back. At times, Martial was so deep that the visitors had what amounted to a back five – but his increased second-half attacking involvement meant his defensive duties were less consistent, which allowed Juventus to penetrate forward more often from their right side.

Dybala’s strike against the crossbar was a warning for the visitors before Ronaldo’s stunning opener, after which United were forced into a prolonged spell of deeper defending. Dybala’s central presence in particular allowed Juventus to consistently attack the visitors’ back line, but they held on and secured a famous away win with those two late strikes of their own.