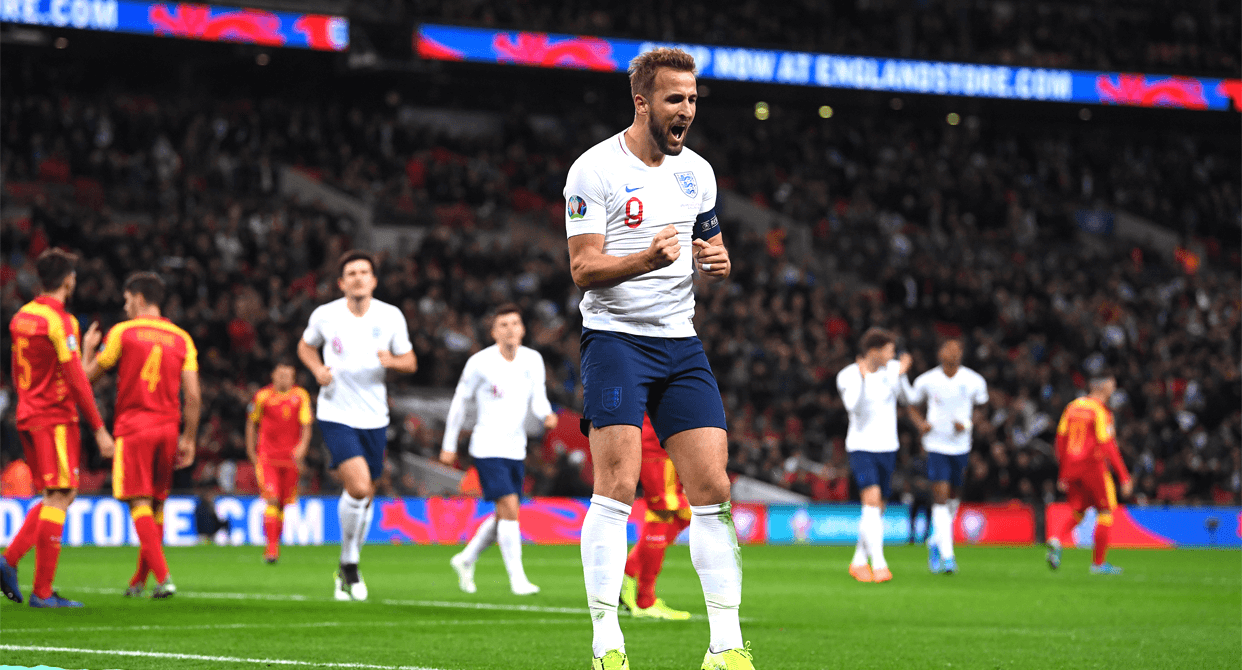 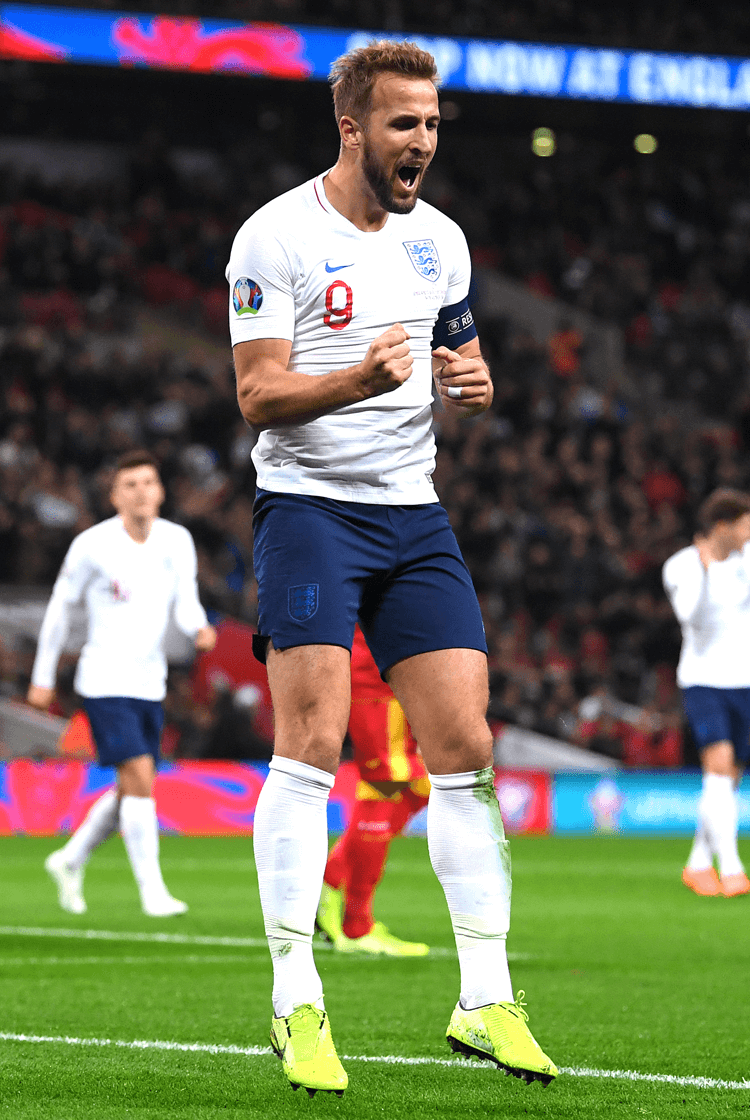 England secured qualification for next summer's European Championships as winners of Group A with a convincing victory over Montenegro at Wembley, and on the occasion of their 1,000th international. A hat-trick from Harry Kane and further finishes from Alex Oxlade-Chamberlain, Marcus Rashford and Tammy Abraham, amid an own goal from Aleksandar Sofranac, ensured that they largely eased to their latest three points, and put the Raheem Sterling-Joe Gomez furore behind them. Abraham's goal was his first for his country; fellow substitute James Maddison was awarded his debut; England's starting XI, with an average age of 23 years and 255 days, also represented their youngest for 6o years. Their total of 33 goals, incidentally, makes them the highest goalscorers in qualifying. 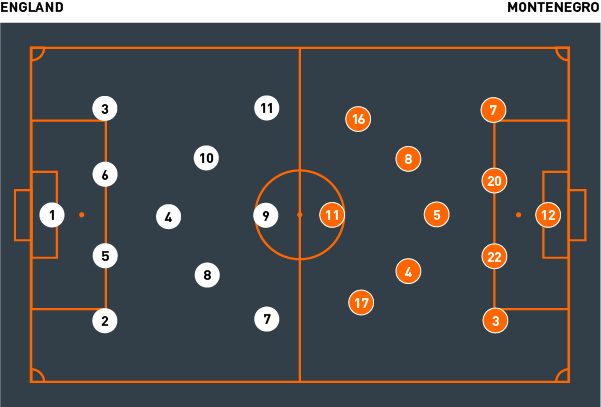 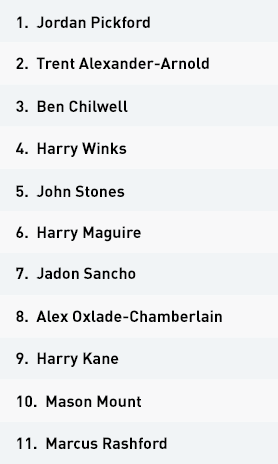 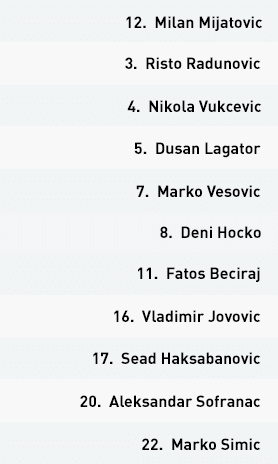 Gareth Southgate organised England into a 4-3-3 formation built on the new-look midfield of Harry Winks, Alex Oxlade-Chamberlain and Mason Mount. His team was confronted with a particularly deep, cautious block from Montenegro, that often involved five midfielders lining up in front of a four-strong defence, and they therefore had to be patient in possession and pursue switches of play to stretch their opponents and to create spaces into which they could advance.

It was on the right that England most consistently succeeded, because of Montenegro's struggles to resist runs beyond their players on the left, as was witnessed when Oxlade-Chamberlain scored after making a blindside run on left-back Risto Radunovic. Trent Alexander-Arnold also had the freedom to advance, and to combine with Jadon Sancho to create two-on-ones in the final third. The visitors instead often prioritised the positioning of the attacking midfielders they were defending against; they consistently attempted to follow them, either through a central midfielder or wide midfielder, and remained largely organised for the opening 20 minutes when doing so, because of their concentration and work-rate.

That they struggled to maintain that same degree of concentration and organisation when defending at set-pieces regardless undermined them. England scored three times in quick succession from dead balls, and not because of an expansive set-piece, but because attackers were not prevented from reaching the relevant deliveries. The hosts' quality in central areas also  invited them to gradually find space and play horizontal passes, followed by disguised, diagonal passes, that eliminated Montenegro's midfielders and led to them advancing.


Responding to trailing 5-0 at half-time, Montenegro adopted a 5-4-1 when they were defending, through Momeilo Raspopovic replacing the struggling Radunovic, and Dusan Lagator withdrawing from midfield, into defence. If this was done to create greater access across the pitch during defensive phases and therefore to restrict the space England sought during switches of play, Southgate's team responded by combining inside to again make them more compact, and then using their full-backs to overlap in wide territory.

Substitute Tammy Abraham impressed with his back to goal and the link-up play that invited others to have an influence. Sancho, Mount, Alexander-Arnold, Ben Chilwell and fellow substitute James Maddison were those he combined with; with the others central, two of those would make penetrative movements in wide positions, to advance beyond Montenegro's defence.

When they had possession during the first half, Montenegro were instructed by their manager Faruk Hadzibegic to play in a 4-3-3 formation, against the 4-1-4-1 England used when they were without it, and in which Harry Winks operated as the single pivot in front of their defence. Montenegro had minimal time in possession during the opening exchanges, which contributed to them favouring direct, long passes.

England pressed aggressively and, where possible, in advanced territory, forcing their opponents into rushed passes, and mistakes, ultimately depriving them of the chance to build any sense of rhythm, or to create goalscoring chances. Montenegro had identified transitions as they likeliest form of attack, and had mixed success in evading the counter-press that was being applied.

If they did so, they then played between two and four short passes, but these neither advanced possession nor eliminated those playing against them, which invited Gareth Southgate's team to recover their shape and to restrict their opponents' further attempts to play forwards. Montenegro showed greater potential when they played forwards early during transitions, and tried to exploit the spaces either behind the defending full-backs, or between the two central defenders.

They also targeted wide areas, but England were content to offer them spaces towards the touchline, where they would then attempt to box them in, even if unnecessary fouls when doing so conceded set-pieces that presented the risk of the visitors launching attacks from areas they posed a threat. Towards the conclusion of the first half, when they had a significant lead, the intensity of the hosts dropped when they were out of possession, and they instead used a mid-block. Montenegro's central defenders were encouraged to have possession; the trigger for their press became the ball moving into midfield, or out wide.

The visitors reorganised into a 3-4-3 when they had the ball, during the second half. They continued to attempt to play with width, but were again pinned too far back to truly make any progress.