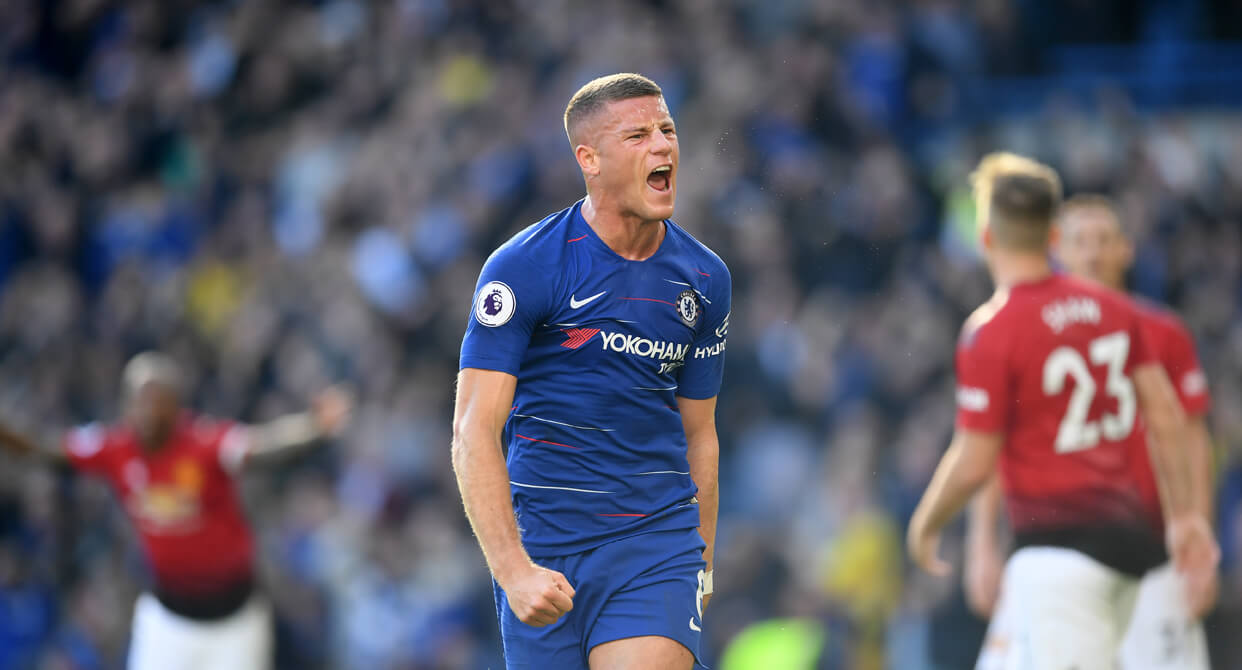 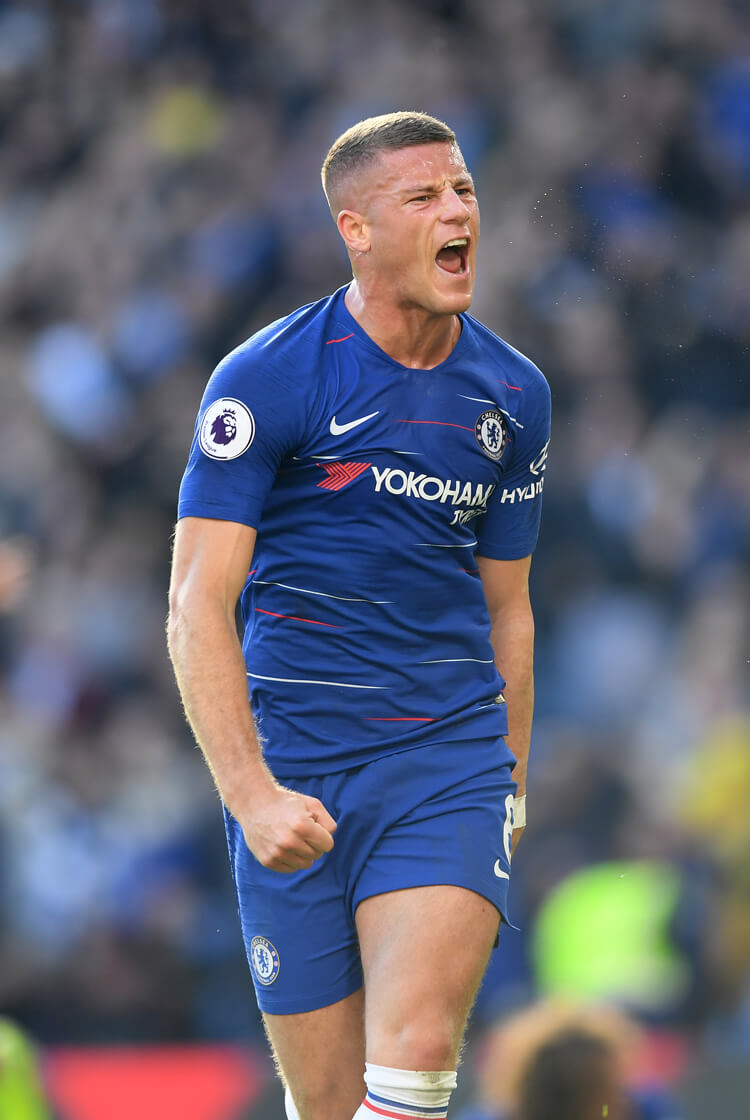 Chelsea and Manchester United claimed a point apiece in an entertaining Premier League draw at Stamford Bridge. Substitute Ross Barkley scored deep into injury time to rescue his side after Anthony Martial had turned the game on its head by netting twice in the second half. The Blues delivered a dominant first-half display, but had only Antonio Rudiger’s powerful header to show for their efforts at half-time. Jose Mourinho’s players reacted well in the second period, and a second smart finish from Martial put United on course for the three points with 20 minutes remaining. Chelsea found the back of the net in the dying seconds, however, to maintain their unbeaten start to the season and deny their opponents a crucial victory. 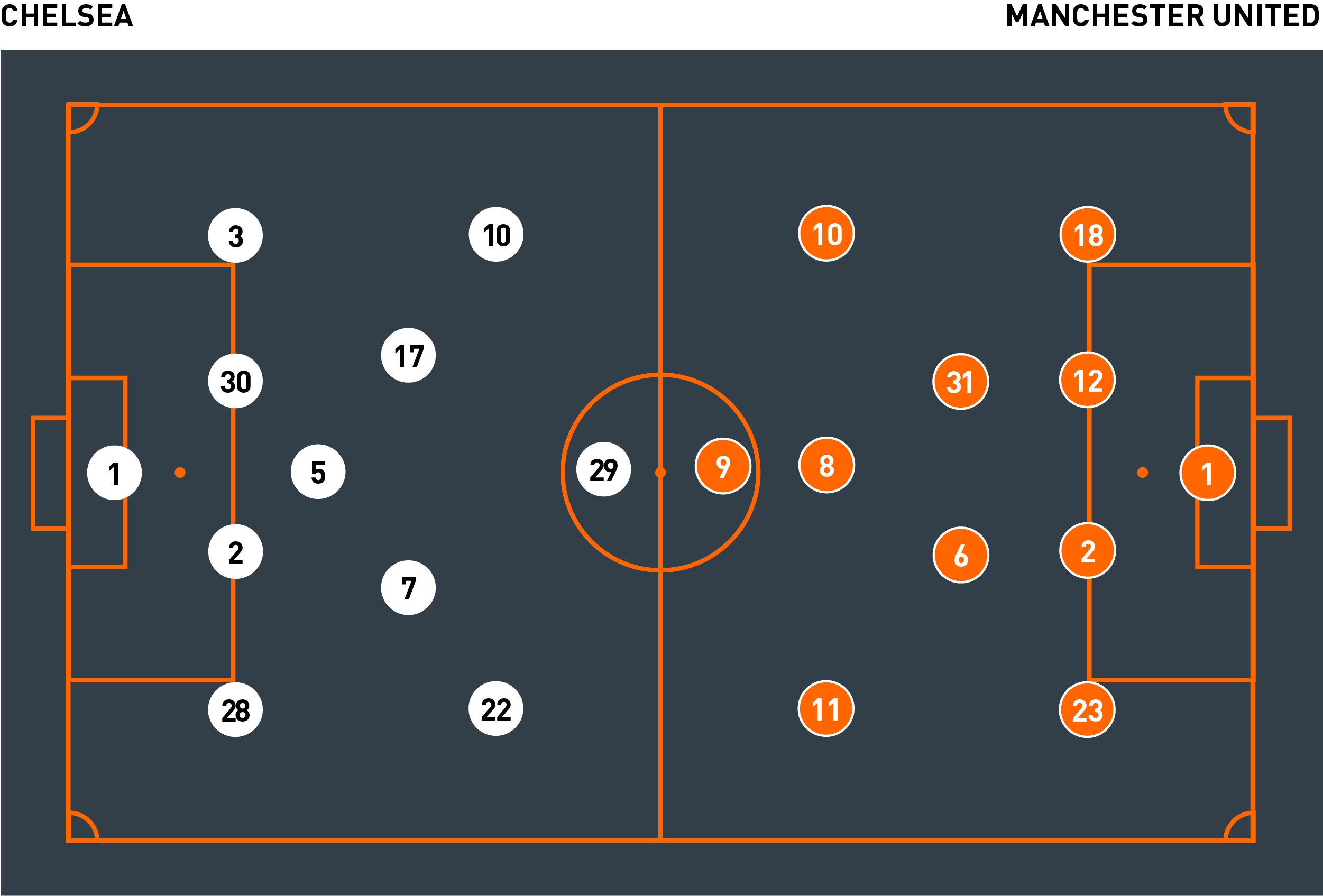 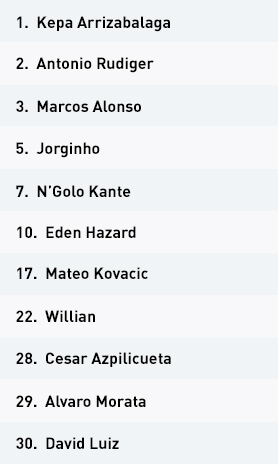 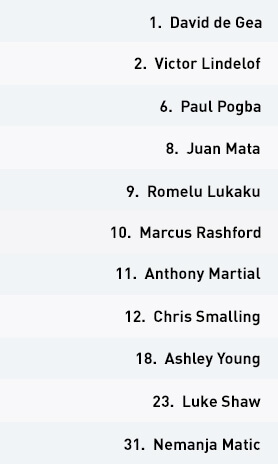 Maurizio Sarri made two changes to his Chelsea side, who continued in his preferred 4-3-3 structure: Ross Barkley and Olivier Giroud were replaced by Mateo Kovacic and Alvaro Morata, respectively.

Initially, the hosts found access into central pivot Jorginho difficult. With the Italian’s feet largely blocked off by Juan Mata and Romelu Lukaku, centre-backs David Luiz and Antonio Rudiger were afforded much more time on the ball, as they stepped into midfield and travelled to the halfway line with ease. The pair looked to play penetrative passes into Eden Hazard and Morata, whose early link-up play released the former on positive runs forward. Intelligent fouls from Manchester United ensured Hazard’s progress with the ball was soon halted, though.

Hazard slowly became a more prominent threat, as Marcos Alonso continued to provide the attacking width from left-back, dragging Marcus Rashford away from the ball. This allowed Kovacic to receive in a false full-back position, as he moved away from the left-sided central midfield space. After receiving in this deeper space, Kovacic drove forward in the hope of further pulling United defenders away from their men. Hazard’s clever blindside run in behind the back line added penetration to this smooth rotation on the left side, and the hosts eventually took the lead from the resulting corner. Rudiger burst away from Paul Pogba, who had lost his man, and headed home powerfully for the opener.

Left-sided rotations for the hosts continued; when Hazard moved back into the wide area, Alonso could then move infield and attack the space within the inside channel. Kovacic remained consistent in providing cover in the false full-back role, as Luiz and Rudiger increasingly stepped forward with the ball, linking defence to attack in the absence of the double-marked Jorginho. Alonso was available to attack aerial passes from the back line, making use of his height over the recovering Ashley Young or Marcus Rashford. Passes forward from Rudiger were particularly threatening, but Morata’s ability to link the play with his attacking teammates was inconsistent.

Chelsea’s second-half link-up play started well, as they looked to build through Hazard rather than Morata. Luiz offered an effective example of this in charging all the way into the penalty area after successfully combining with Hazard on the edge of the box following a drive forward. This dominance of the ball was short-lived, though, and United soon grabbed an equaliser. The hosts reacted by frequently moving Willian and Hazard to the same side of attack, often the left, to combine in tight areas and overload United’s defence.

With Jorginho finally afforded more central space to drive forward, Chelsea were now lacking full attacking width – and Willian and Hazard attacking similar spaces only made it easier for United to regain possession and increase their threat on the counter-attack. Even when Jorginho didn’t step in, Hazard and Willian’s positioning hindered their ability to stretch the visitors’ defence, which was more than comfortable defending in a compact low block.

Pedro’s introduction for Willian restored their attacking width, as Hazard could then rotate back into a central attacking position in the closing stages. They regained control of the ball and scored a last-gasp equaliser through substitute Ross Barkley. Luiz’s towering header bounced back off the post and Barkley was on hand to tap home following a wonderful save from David de Gea that had initially kept Rudiger’s first attempt out.

Out of possession, Chelsea initially set out to aggressively press their opponents. But against direct play and a visiting team looking to play backwards after a regain, their fluid counter-pressing soon ceased, as the distance to quickly press and win back the ball became too large. United’s passing to goalkeeper De Gea after a regain ensured valuable extra moments of possession for the visitors after a largely dominant display from the hosts.

As United eventually constructed more spells with the ball, Chelsea dropped into a 4-5-1 mid-block, trying to deal with direct forward passes from their opponents. With plenty of bodies in midfield and defence, such passes forward were easily dealt with; the back line frequently overloaded an increasingly frustrated attacking unit.

The stability of this defensive structure was tested in the second half, as Juan Mata started to move higher and Chelsea were unable to block passes into him. Central midfielders Kovacic and N’Golo Kante were responsible for Pogba and Nemanja Matic, leaving Jorginho to block access into Mata behind midfield. Quick rotations between Mata and Romelu Lukaku made it increasingly difficult for Jorginho to track these movements, as he couldn’t leave the central lane open for additional runners. Mata’s rotation for United’s second goal acted as a fine example of how Chelsea struggled to deal with direct play around their central block.

Jose Mourinho also made two changes to his team, as the Manchester United manager moved away from the 4-3-3 that had fought back to beat Newcastle in their previous game. He reverted to a 4-2-3-1 for the trip to Stamford Bridge; Victor Lindelof came in to the central defence, while Juan Mata replaced Scott McTominay and started in a central attacking role in midfield.

United saw little of the ball in the opening exchanges and dropped into a congested mid-block as a result. When they did manage to sustain spells with the ball, they targeted the space in behind left-back Marcos Alonso; with Eden Hazard moving inside and Mateo Kovacic dropping into a false full-back role to provide cover, right winger Marcus Rashford had the pace and directness to attack this vacant space. A lack of crossing options ensured any early attacking play was limited, though, despite Rashford creating a number of opportunities to deliver from the right.

Mata grew frustrated in the number 10 role, and began to drop deeper in brief spells of possession for the visitors. This consequently resulted in United lacking presence between the lines, as Chelsea set up in a 4-5-1 if they were unable to regain possession from quick counter-pressing. They were now forced to send direct passes in behind their opponents’ back line, as the trio of Rashford, Romelu Lukaku and Antony Martial made runs away from the ball – but these direct passes were dealt with comfortably by the hosts’ defence.

Noticing this, Mata instead stayed ahead of the ball when in midfield in the second half – and the Spaniard’s presence was effective in taking defenders away from Lukaku. United could now link their attacks through Lukaku, helping them to switch the play to the opposite side, where Rashford and left-back Luke Shaw provided the width.

Their first real attack of any substance resulted in a goal, as Mata’s movements between the lines ensured they could remain patient with the ball due to an increase of short passing options in the final third. After Shaw’s cross wasn’t fully cleared by the Chelsea defence, Ashley Young’s deflected shot eventually fell to Martial, who swept home an equaliser. Scoring dramatically increased the tempo and aggression of United’s press, with the whole team visibly lifted.

As Mata reduced his tightness to Jorginho, he became freer during moments of transition. Pogba naturally looked for Lukaku after regaining the ball in central midfield, but the striker was slow to recognise the link-up play available with Mata on the break – especially when his teammate had plenty of space to receive and help United progress into the penalty area.

Martial’s second goal came after a Chelsea free-kick was comfortably claimed by David de Gea. From here, the visitors were patient in possession, playing around the congested central areas. Mata moved away from Jorginho once more, rotating with Rashford in the right wide area before running on to a ball sent down the channel. After Mata had beaten David Luiz to the ball and then found Rashford, Martial smashed home from the resulting cross to give the visitors an unexpected lead.

Out of possession, Mata locked himself on to central pivot Jorginho right from the first whistle, ensuring that Chelsea’s key link between defence and attack was far from comfortable in turning and playing forwards. Lukaku would also block off access into Jorginho’s feet, moving with the ball as it travelled across the hosts’ back line. Chelsea, though, still managed to penetrate United’s 4-4-1-1 mid-block, as their back line sent splitting vertical passes into Alvaro Morata and Hazard, with the latter drawing early fouls in dangerous areas.

United particularly struggled to deal with their opponents’ fluid left-sided rotations. Well-timed movements pulled defenders out of their shape, with Chelsea’s quick, incisive passing combinations successful in frequently penetrating the space between right-back Young and centre-back Chris Smalling. While Mata and Lukaku continued to subdue Jorginho, the home side’s vertical passing remained, as Pogba and Nemanja Matic failed to block access into Morata’s feet or Alonso/Hazard’s direct runs in behind.

Lukaku could do little as both David Luiz and Rudiger continued to drive forward from central defence unchallenged, with the time and space to pick out accurate balls that cut through their block. If it wasn’t for ineffectual link-up play from Morata between the lines, the visitors would have had faced more central problems in the first half.

The consistency with which Mata tracked Jorginho was significantly reduced in the second period, which allowed the Italian to step forward more with the ball and drive his midfield into the United half. While this increased Jorginho’s ability to dictate play, it also left Mata unattached during moments of transition. In following Jorginho around the pitch, Mata immediately had a direct marker to contend with in the first half, reducing his input in possession. This changed for the better in the second half, and it looked to have worked a treat with United’s mid-block remaining strong until the dying embers of added time.