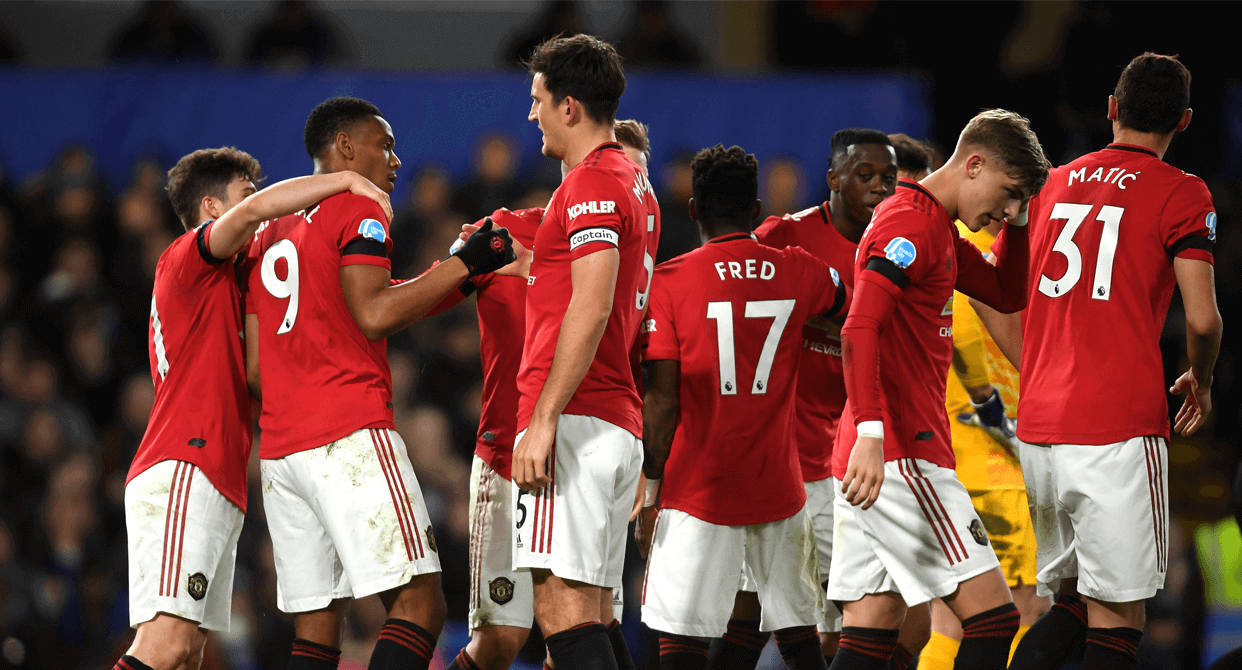 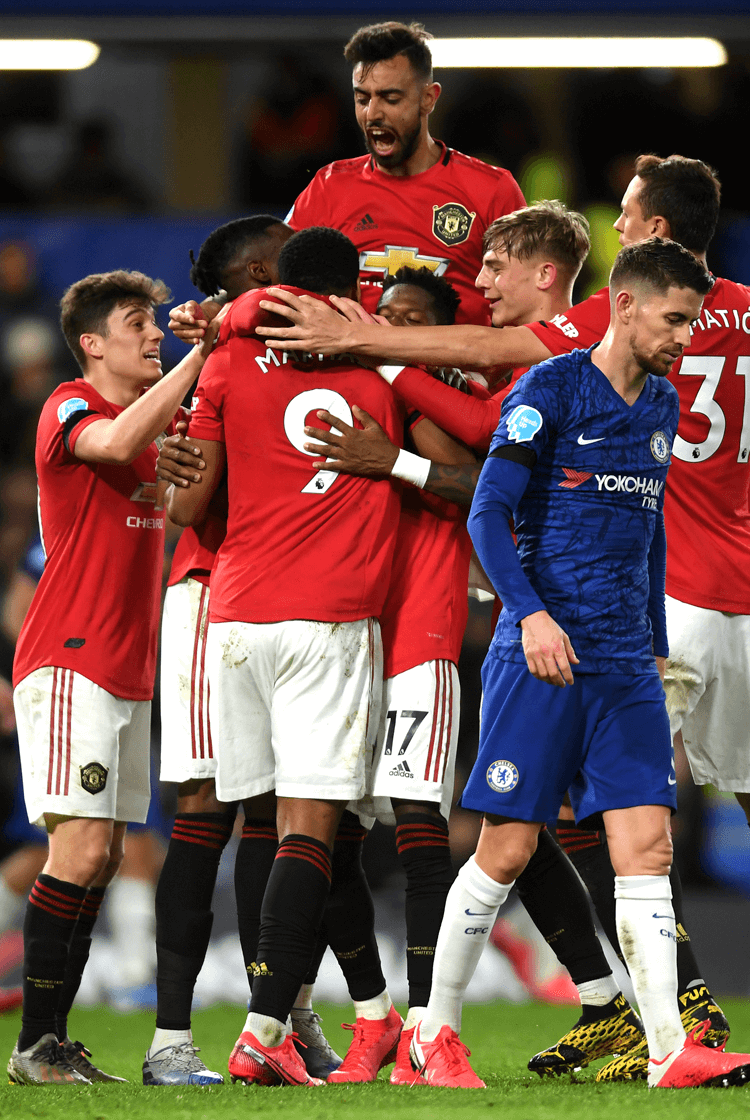 Ole Gunnar Solskjaer oversaw Manchester United' first league double over Chelsea in more than 30 years, when headed goals from Anthony Martial and Harry Maguire punished Frank Lampard's wasteful hosts. Chelsea were largely dominant in possession and recording 17 attempts on goal, but that only one of those was on target meant that David de Gea was rarely tested. Through being, by comparison, so clinical, United improved Solskjaer's impressive record against two of their Premier League rivals – he has won five away fixtures at Chelsea and Manchester City, which is more than in their previous 19 under Sir Alex Ferguson, David Moyes, Louis van Gaal and José Mourinho. His opposite number was regardless frustrated by the contributions made by the Video Assistant Referee (VAR). "I've seen it again and VAR is there for that and they didn't get it right," Lampard said. "Harry Maguire should have been sent off (for appearing to kick Michy Batshuayi), that's clear, and that obviously changes the game. It's a bit soul destroying (for the fans) but it's the culmination of a few incidents. Solskjaer said: "Was Harry Maguire lucky? I don't think so. He was fouled first and Batshuayi was going to fall on top of him so he put his leg out and hit him where it hurts." 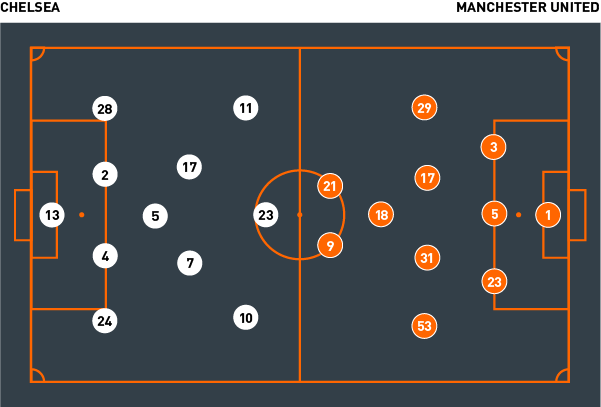 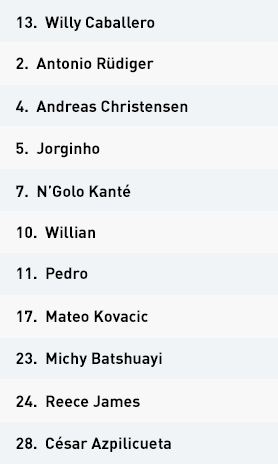 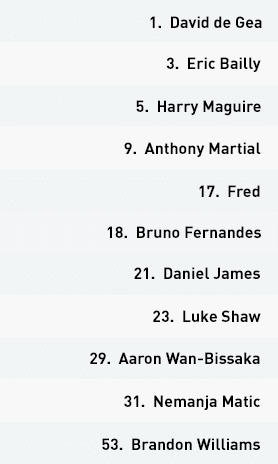 Chelsea set up in a 4-3-3 formation, led by Pedro, Willian and Michy Batshuayi, when they had possession, as Frank Lampard sought revenge for their defeat at Old Trafford on the opening day of the season. Manchester United used a 5-2-3 when out of possession; Eric Bailly returned to central defence, behind a midfield pairing of Fred and Nemanja Matic.

Chelsea enjoyed the majority of possession and recorded 17 attempts on goal, but only one of those was on target. They tried to build that possession through midfield, but Mateo Kovacic's dynamism was too rarely complemented with the similar movements ahead of the ball required to create further spaces to advance into.

United were predominantly man-oriented in their out-of-possession approach. Pedro attempted to draw United's defenders out of their defensive positions to create spaces for his teammates, leading to some encouraging openings during the first half. His movements inside from his role as forward invited César Azpilicueta to make forward runs and to threaten the spaces in behind United’s defence, ahead of crossing the ball.

Chelsea created some fine first-half opportunities from which Batshuayi should have given them the lead, by penetrating into territory between United's wing-backs and central defenders, but a lack composure and quality undermined the Belgian striker. Pedro’s movements also weren't limited to moving from a wide position and into half-spaces; he withdrew to collect possession, into central areas, and then into distance half-spaces in an attempt to create a overloads.


A significant issue came within their passing detail. They moved into promising positions but were let down when attempting to make the decisive pass; some led to Chelsea keeping possession, but a lack of quality led to attacks frequently losing momentum, and therefore United either recovering their defensive shape, or initiating a press.

Chelsea's midfielders and attackers frequently rotated, to attempt to draw their visitors out of position. Mason Mount and either Willian or Pedro would draw an opponent in one direction while the other moved in the opposite, ultimately creating a passing line by eliminating that defender.

United’s victory owed much to their management of transitions. They sought to counter-press immediately at the point of losing possession, and were aggressive in doing so. Fred was particularly proactive in discouraging Chelsea from quickly playing out, and those behind him worked to step in front of their man and then regain possession when Chelsea tried to play forwards early.

Ole Gunnar Solskjaer organised Manchester United into a 3-4-1-2 formation during the periods they had possession. Wing-backs Aaron Wan-Bissaka and Brandon Williams advanced from their defensive positions to create a four-strong midfield, behind Bruno Fernandes, who supported Daniel James and Anthony Martial.

Chelsea used a 4-1-4-1 formation when they were defending; their visitors sought to play forwards quickly, to put James or Martial into the channels, but they were effectively shepherded towards the touchline. With those forwards’ chests facing towards the corner flag as they made those runs it became easier for those defending to use the ball's momentum to encourage play towards the relevant sideline.

Frank Lampard's team attempted to ensure that United couldn’t play through their central midfielders, and was predominantly man-oriented while out of possession. United were attempting to find Bruno Fernandes between the lines and occasionally managed to do so, but he lacked support, and therefore struggled to progress play further forwards.

Their opening goal came when Wan-Bissaka advanced from wing-back and crossed for Martial to finish; their second came from a further cross. Despite those goals they often lacked both ideas and the quality required to regularly threaten in the final third.