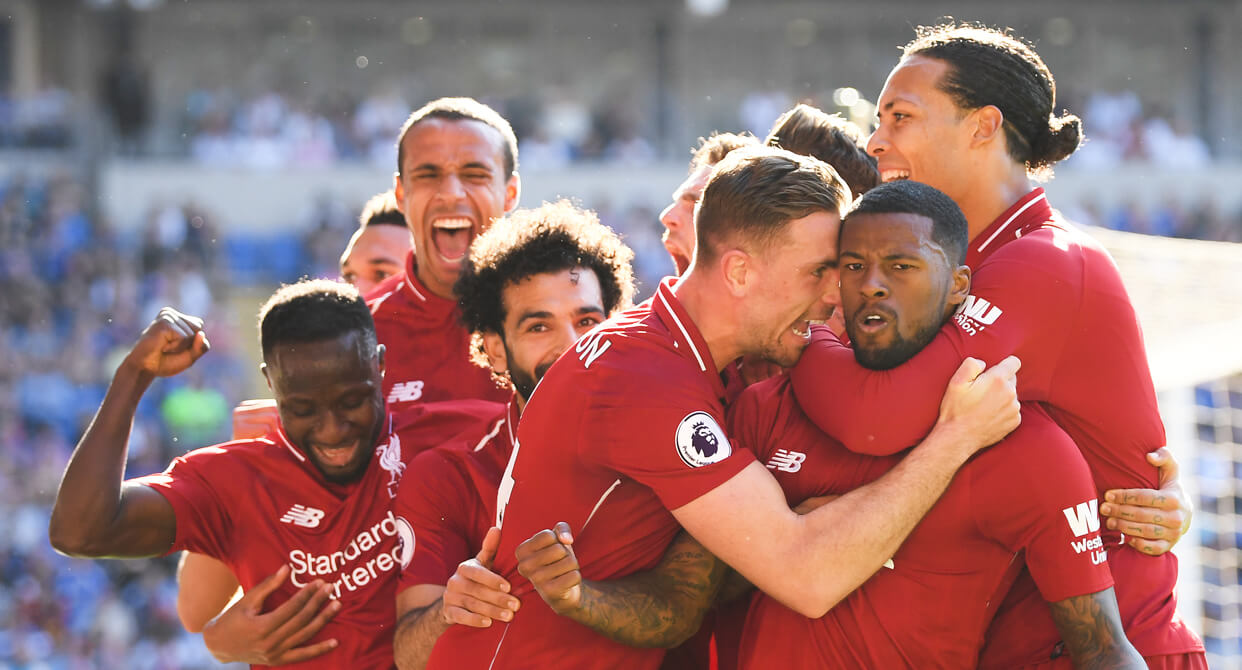 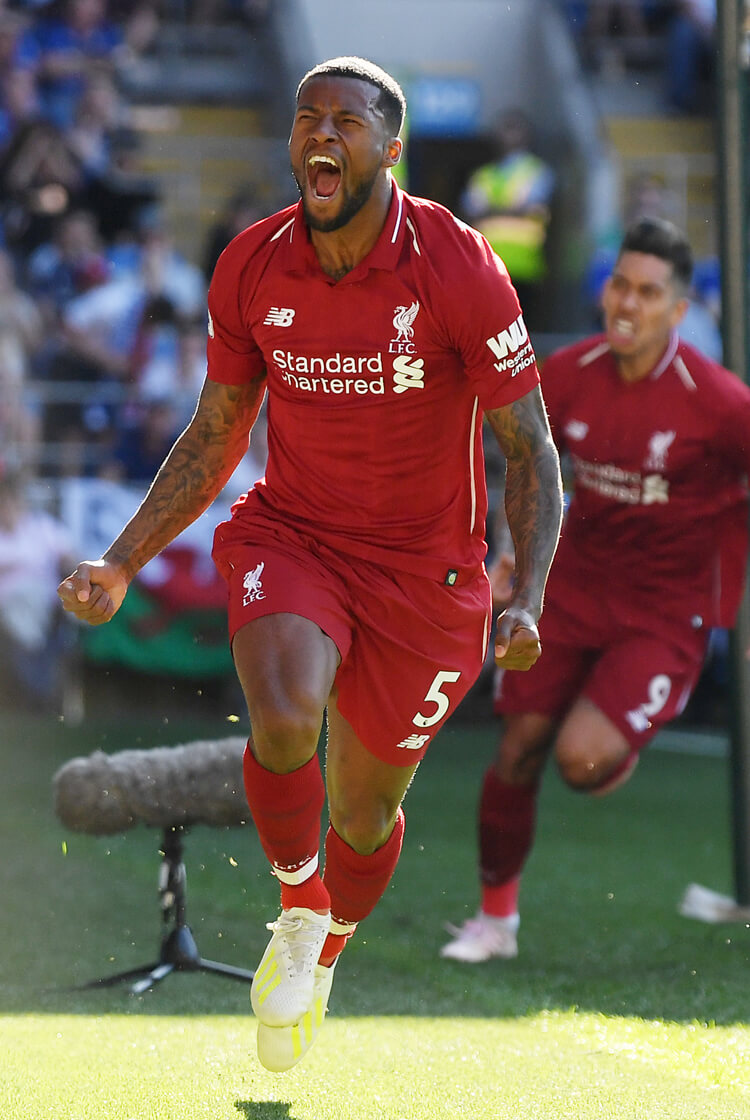 Liverpool returned to the top of the Premier League and kept their double hopes firmly alive with a well-earned victory against difficult opponents in Cardiff City. Neil Warnock set his team up to frustrate the title-chasing Reds, although Oumar Niasse wasted a glorious chance to earn the Bluebirds a first-half lead after Roberto Firmino had missed an equally good opportunity at the other end. Jurgen Klopp sent his men out with renewed purpose in the second half, and the deadlock was broken when Trent Alexander-Arnold played a low cross in for Georginio Wijnaldum to fire home a rasping shot just before the hour. The hosts tried to find a way back, but their hopes were dashed when Sean Morrison was adjudged to have fouled Mo Salah in the Cardiff box with 10 minutes on the clock. Substitute James Milner swept home the resulting penalty to send Liverpool back above champions Manchester City, with all eyes now focused on Old Trafford on Wednesday. 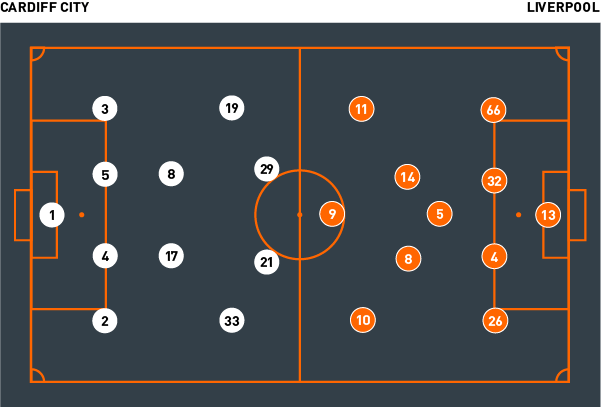 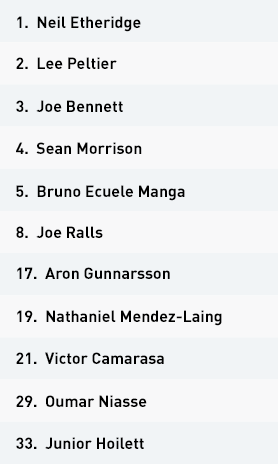 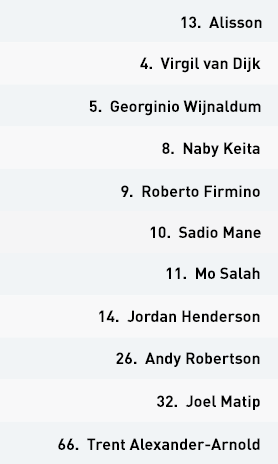 Neil Warnock set his Cardiff City team up in a 4-2-4 formation in possession, with Joe Ralls and Aron Gunnarsson operating as the two deep central midfielders. Victor Camarasa joined Oumar Niasse in a front pairing, with Junior Hoilett and Nathaniel Mendez-Laing providing width outside them.

The hosts had very limited time on the ball, so naturally their opportunities came mostly on the counter-attack. Here, they would look to play passes into the channels behind the Liverpool defence for Niasse in particular to chase. When the powerful forward moved out into the channels, Camarasa, Hoilett and Mendez-Laing would look to make runs in behind – although the latter two were often late in arriving as they had been so deep in tracking the Liverpool full-backs.

On the rare occasions that Cardiff had good possession, they would try to get their full-backs overlapping around the wide midfielders. Left-back Joe Bennett in particular was keen to get forward and try to create crossing opportunities. Otherwise, the hosts tended to play direct from goalkeeper Neil Etheridge so as to bypass the Liverpool press. Liverpool centre-backs Virgil van Dijk and Joel Matip were dominant in the air, however, with the visitors excellent at collecting any second balls.

In their more regular out-of-possession structure, Cardiff dropped into in a 4-4-1-1 shape. Hoilett, Gunnarsson, Ralls and Mendez-Laing sat across midfield, with Camarasa ahead of them and Niasse ahead of him. They had no interest in pressing Liverpool high and so fell back into a mid-block, but operated in a strictly man-oriented way. Niasse drifted between Van Dijk and Matip without really looking to press, while Camarasa was responsible for the Reds’ single pivot Georginio Wijnaldum; Gunnarsson and Ralls picked up Naby Keita and Jordan Henderson.

Hoilett and Mendez-Laing tracked full-backs Andy Robertson and Trent Alexander-Arnold as far as possible, while Lee Peltier and Bennett dropped with Sadio Mane and Mo Salah, leaving Bruno Manga and Sean Morrison to take care of Firmino. The centre-backs were happy to drop with the Brazilian, providing there was no threat in behind at the time.

The man-marking made it difficult for Liverpool to receive the ball freely, although Cardiff had to be careful about how far they moved with the man, so as not to leave dangerous spaces for the Reds to exploit. Firmino caused them several problems, with his dropping movements creating overloads in midfield. Cardiff tried to adapt to this by using Gunnarsson to stay with him, but this then left Keita free – and if Peltier moved out to track him then that freed up Mane. The Cardiff right-back was eventually happier to leave Keita free, rather than leave space in behind for the more dangerous Mane.

In the second half, Cardiff occasionally used Camarasa in a deeper role, creating an extra man in midfield. This could have been done earlier, with Niasse playing on Wijnaldum, and Camarasa joining Gunnarsson and Ralls in the middle to negate any potential overload created by Firmino.

In transition, the hosts had no interest in counter-pressing. Instead, they would drop and reform their shape in order to protect the space in behind and restrict the possibility of a Liverpool counter.

Jurgen Klopp set Liverpool up in a 4-3-3 formation, with Georginio Wijnaldum at the base of the midfield and Naby Keita and Jordan Henderson in front of him. Roberto Firmino started as the central striker, with Sadio Mane and Mo Salah in their usual positions outside him.

Liverpool had to negotiate their hosts’ man-oriented defensive structure, and they tried to do this through two main strategies. The first was through rotation between their forwards and midfielders; the forwards looked to drop towards the ball and drag their opponents with them, opening up spaces in behind for penetrative passes for midfield runners. If the Cardiff defenders took responsibility for these runners, then the dropping forward would be free to receive possession, turn and continue the attack.

The other strategy was focused on Firmino and his movement in deeper areas. Liverpool were quick to recognise that he wouldn’t be tracked if Salah or Mane or both were threatening to make runs in behind the Cardiff centre-backs. As a result, Firmino was able to drop in and create a central three-on-two overload with Keita and Henderson against Aron Gunnarsson and Joe Ralls. The Brazilian seemed to pick on Gunnarsson in particular, who now found himself caught between Firmino and Keita.

This resulted in Firmino receiving the ball and being able to turn on several occasions, although the Cardiff back line tended to deal with the next phase of the attack well for the most part. Towards the latter stages of the game, Liverpool found more counter-attacking opportunities available to them, but they lacked the ruthlessness and incisive forward passing that we have come to expect from them as they saw the game out for what in the end looked a comfortable 2-0 victory.

Out of possession, Liverpool operated in the same 4-3-3 structure. They didn’t have much defending to do throughout the game, such was their dominance in possession, but when they did it was mostly about counter-pressing and dealing with direct play.

When counter-pressing, Klopp’s team would look to flood the man on the ball, while the players in the next line would squeeze up towards the ball to congest the space, allowing them to continue the press if the initial line was breached. The intensity of this work forced the error that led to Salah receiving the ball in behind in the build-up to the penalty from which James Milner secured the victory late on.

When dealing with direct play, Virgil van Dijk and Joel Matip were largely dominant in the air – and the midfield three were regularly able to pick up second balls and continue the attack. In the rare phases when Cardiff actually managed to build attacks, Mane and Salah were happy to track the full-backs in wide areas, protecting Trent Alexander-Arnold and Andy Robertson against any two-against-one overloads.