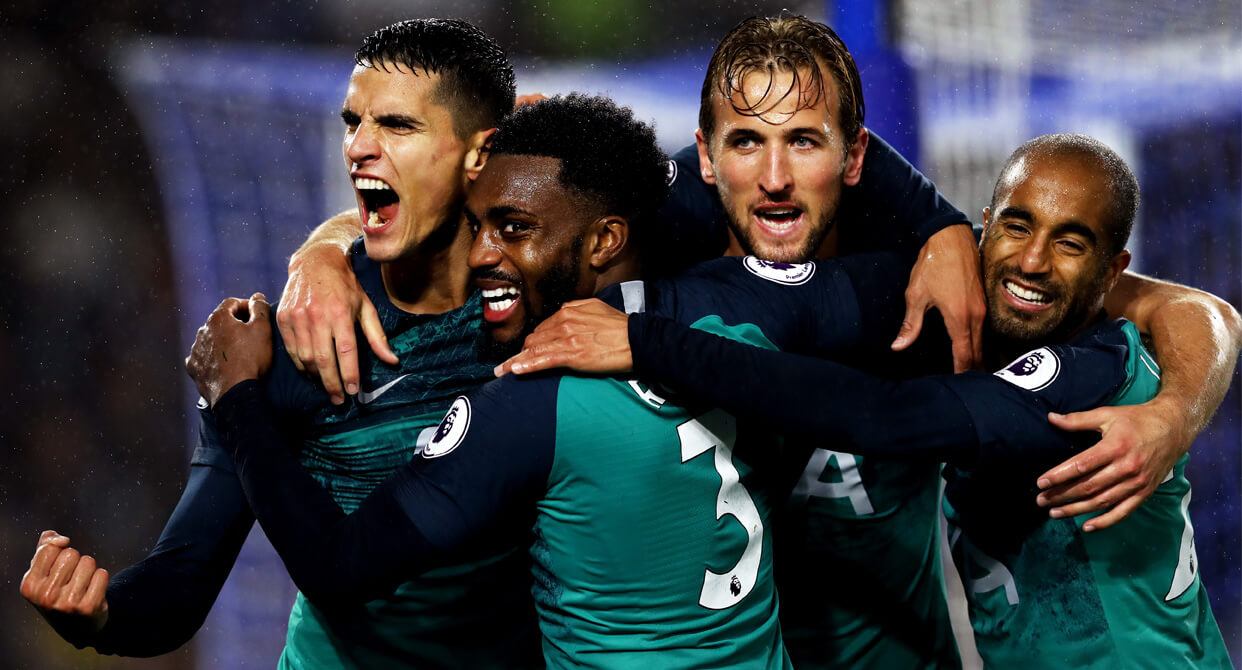 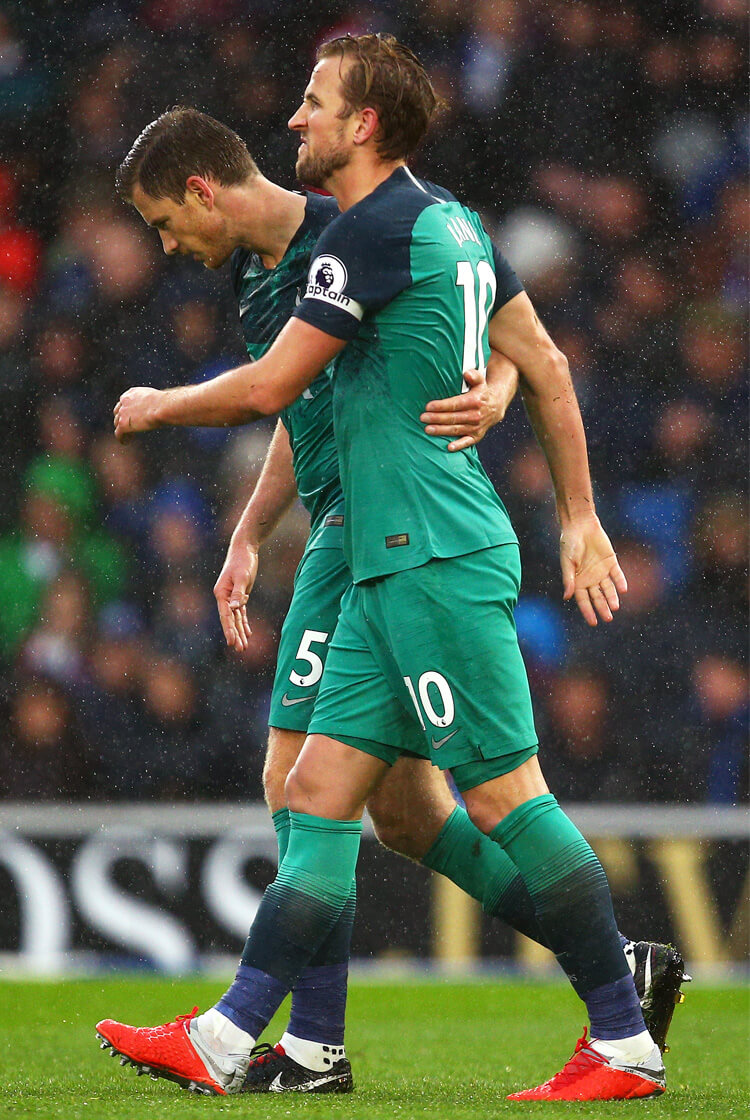 Following a difficult few weeks featuring three straight defeats in all competitions, Tottenham returned to winning ways with victory over Brighton in the Premier League. It was a challenging contest in the pouring rain, and Spurs were still far from convincing, but they will have left the Amex with an overriding sense of relief. Harry Kane ended his mini-drought with a routine finish from the penalty spot after Glenn Murray had handled the ball in the box, before substitute Erik Lamela netted the crucial second within the final quarter of the contest. Anthony Knockaert halved the deficit in injury time, and had a genuine chance to grab an even later equaliser, but the Seagulls ended with nothing and are without a win since beating Manchester United in mid-August. 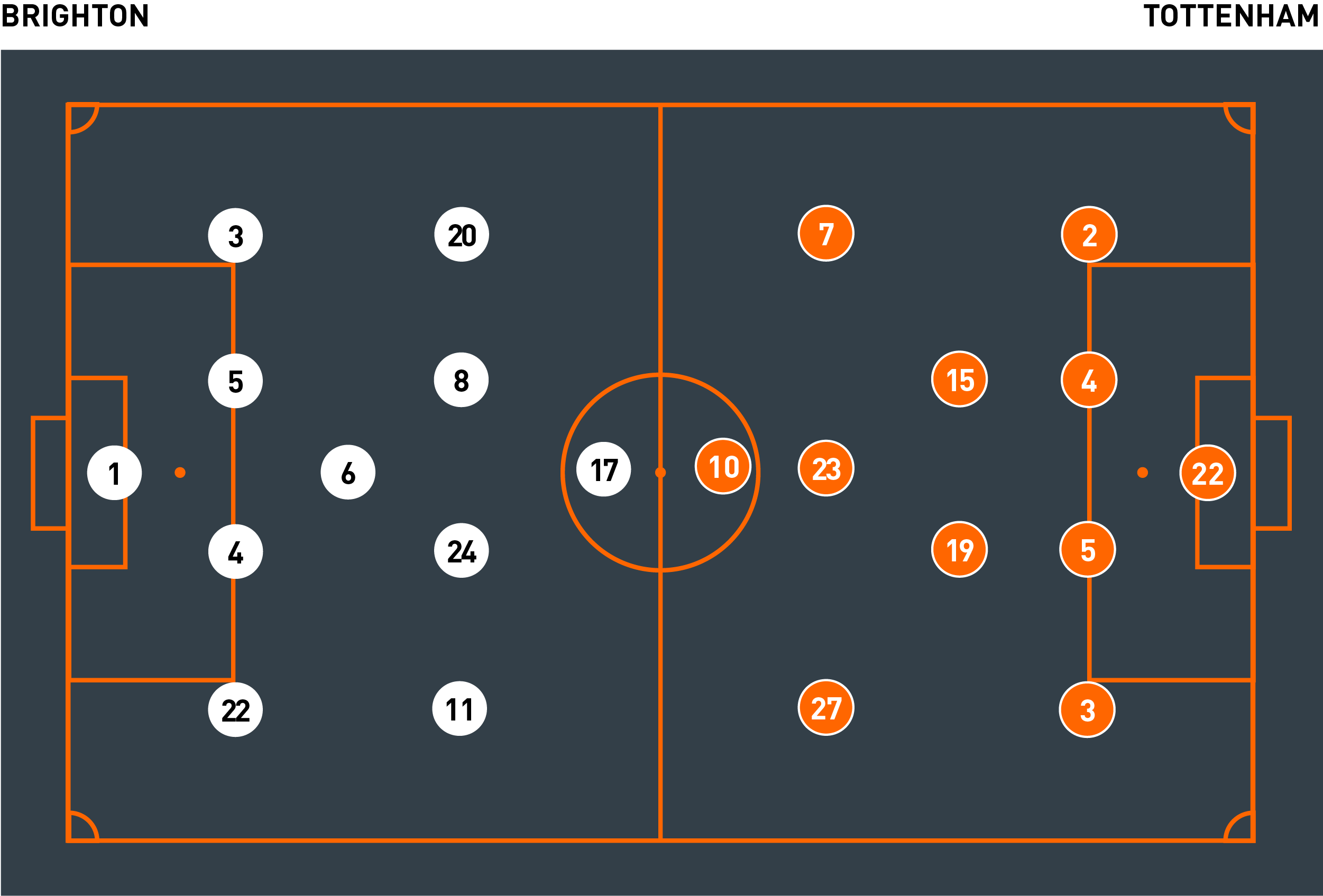 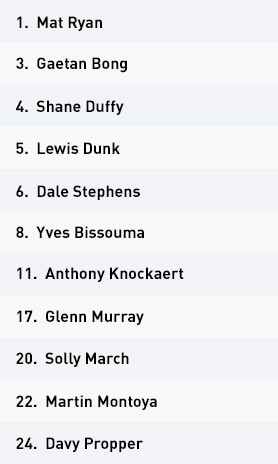 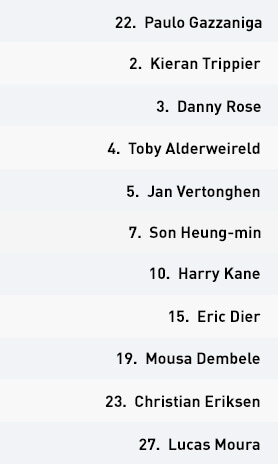 Chris Hughton named an unchanged side from the XI that drew 2-2 away at Southampton in their previous fixture. They continued in their 4-1-4-1 structure, with lone centre forward Glenn Murray leading the line in attack.

Brighton saw little of the ball in the opening exchanges, with target man Murray extremely isolated in between Tottenham’s double pivot and central defensive pairing. This box of players ensured that even if Murray won the first contact, any loose balls were calmly collected by the visitors’ back line. Defensively, they prioritised blocking off central access into Harry Kane, but the England international’s rotations with Son Heung-min ensured he could actively link the play – particularly with right-back Kieran Trippier.

When in possession, Brighton looked to the dribbling capability of Anthony Knockaert to lure fouls within the Tottenham half. This created opportunities for centre-backs Shane Duffy and Lewis Dunk to join Murray in attacking direct free-kicks into the penalty area. Goalkeeper Mat Ryan favoured the direct ball, too, and Murray soon began to move away from Spurs’ central defensive box and into the wide areas. The 34-year-old could then isolate the away side’s diminutive full-backs and flick the first ball into a midfield teammate. The hosts eventually sent their entire team over to the areas surrounding Murray to increase their chances of winning the second ball – but despite this showing signs of initial success, difficulty in creating passing combinations meant they struggled with the next phase of their attack.

While they remained compact and defensively aware throughout the first half, opportunities to counter-attack from deep were limited. Solly March and Knockaert were often too deep to create any momentum from their wide midfield positions, as they were charged with tracking the runs of full-backs. They consequently lacked width and numbers during breakouts, allowing their opponents to eventually regain possession in midfield.

With Kane’s penalty giving Spurs the lead just before half-time, Brighton reacted by increasing the intensity of their press as the second period got under way. Murray – supported by March, Knockaert and Davy Propper – stepped high on to the visitors’ back line, who continued to build short from goal kicks. Tottenham played with composure against this aggression, though, comfortably building around high-pressing attackers and driving at a more exposed midfield and central defence. If it wasn’t for outstanding recovery runs and slow decision-making from Spurs in progressing the ball forward, Ryan might have been busier in the Seagulls’ goal.

The hosts remained loyal to their approach of looking for Murray from deep, but were also afforded the luxury of bringing March and Knockaert into the game more during transitions and open play. Trippier at right-back had notably become far less aggressive with his positioning in the second half, reducing the defensive work March needed to carry out. March could now maintain a much higher starting position, so when possession was regained on the left side he could spin and receive in behind Trippier. Brighton enjoyed some success with this approach, as the winger’s crosses created chances for attackers and won a number of corners.

Their intensity soon faded, however, as the visitors regained control of the ball through long spells of possession – and Spurs eventually doubled their lead after a sweeping passing move from deep was finished off by substitute Erik Lamela.

Brighton saw little of the ball in the final 10 minutes, with Tottenham dominating possession to run down the clock. They did manage to grab one back with seconds remaining – Knockaert ran on to a long pass from deep before cutting back inside from the right and bending his shot into the far corner – but it was ultimately too little, too late for the hosts.

Mauricio Pochettino set up in a 4-2-3-1 formation, as he attempted to halt Tottenham’s three-game losing run. In two changes from the side that had lost to Liverpool in their previous Premier League fixture, goalkeeper Paulo Gazzaniga came in for the injured Michel Vorm, while Son Heung-min replaced Harry Winks further up the field.

Spurs dominated the early proceedings, with full-back Kieran Trippier providing effective attacking width from the right side, which enabled Son to drift inside and behind the hosts’ central midfield pairing. Harry Kane was initially blocked off by defensive midfielder Dale Stephens, who cut off central access into the England forward, making the additional central presence of Son important. The South Korean’s positioning enabled Kane to rotate out of the central congestion and actively receive away from the pressure. But while the visitors then regularly looked to find Trippier on the right touchline, Kane’s decision to drop out to link the play meant that the full-back had little to aim for in the penalty box – his subsequent crosses then had to be delayed, which lessened their potential impact.

Kane began to move out towards the left side, again trying to link the play with the ballside full-back as Lucas Moura moved infield to occupy Stephens. Danny Rose wasn’t as aggressive with his positioning as Trippier to begin with, but he soon provided late runs forward, supporting his front line with first-time crosses into the penalty area. As with the deliveries from the opposite flank, however, they posed few problems for an aerially strong Brighton defence.

The inside movements of Moura and Son assisted the visitors during moments of defensive transition, too. With their inside runs being marked by full-backs, the role of tracking Rose and Trippier went to the hosts’ wide midfielders – so when the Seagulls managed to regain possession and then looked to break, they lacked any form of immediate width or depth in possession. Solly March and Anthony Knockaert were so deep they often fell to immediate counter-pressing within the midfield third.

Having taken the lead through a confidently struck Kane penalty at the end of the opening period, Tottenham were put under far more pressure at the start of the second half. Brighton’s attacking unit stepped higher, creating a disorganised yet aggressive high press. Spurs’ back line made better use of their wide full-backs to bounce the ball around these attackers, often finding Eric Dier and Mousa Dembele free to travel forward with the ball in the centre of the park.

If either Dier or Dembele were forced wide when confronted with an aggressive press, set-backs to the central defence would tempt their opponents’ forwards and midfield even higher. This created huge spaces for lofted passes to be played over the pressing units; with these spaces in the middle third opening up, Christian Eriksen in particular frequently found areas from which he could launch dangerous Tottenham attacks.

As the pressure intensified, however, Spurs had to deal with a spell of attacks from Brighton’s left side, particularly during moments of transition. More conservative positioning from Rose and Trippier enabled the home side’s wingers, March and Knockaert, to remain higher to counter-attack. Pochettino reacted to this by replacing Son with Erik Lamela, who helped the visitors regain control of the match and run down the clock through long spells of possession.

Within the final quarter of the contest, Spurs found a breakthrough to double their advantage. A superb splitting pass from Dier found Lamela in the central lane, who drove forward in attack before working the ball to Rose. The left-back’s first real overlap of the second half provided just enough attacking width to create additional space for runners in the central areas. Lamela continued his run away from the ball before driving home a low shot from Rose’s cutback cross. They survived a late scare, with Knockaert halving the Brighton deficit in injury time, but Spurs held on to register a first win since their 3-0 drubbing of Manchester United at Old Trafford.