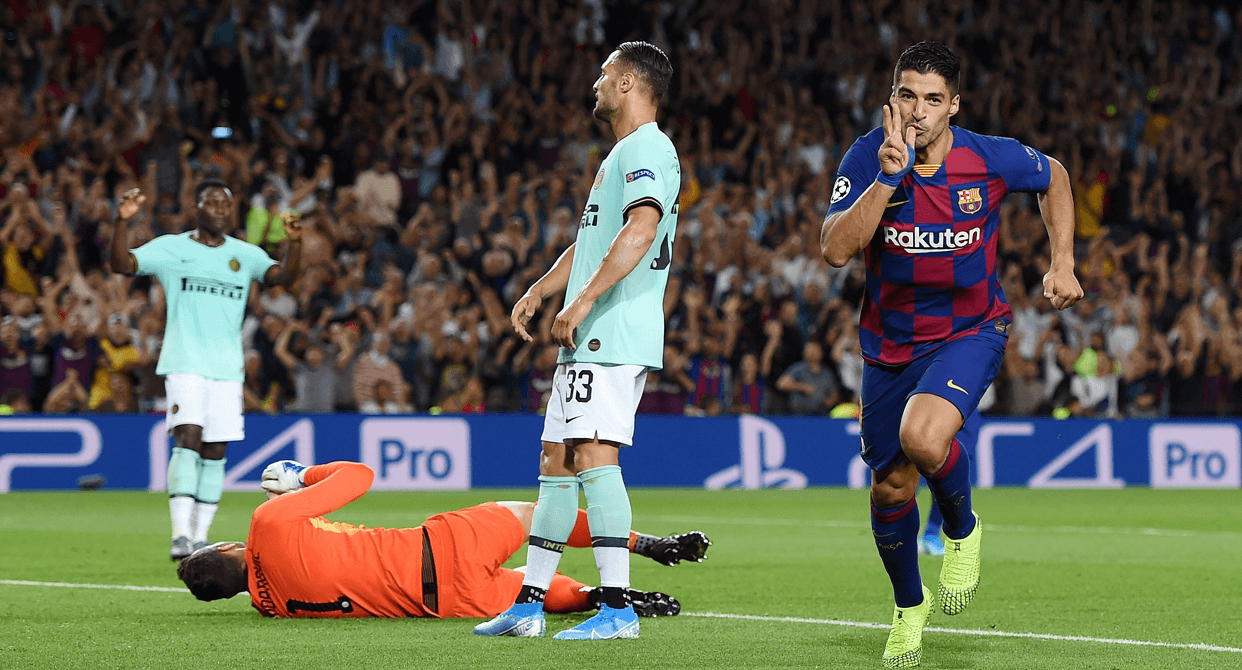 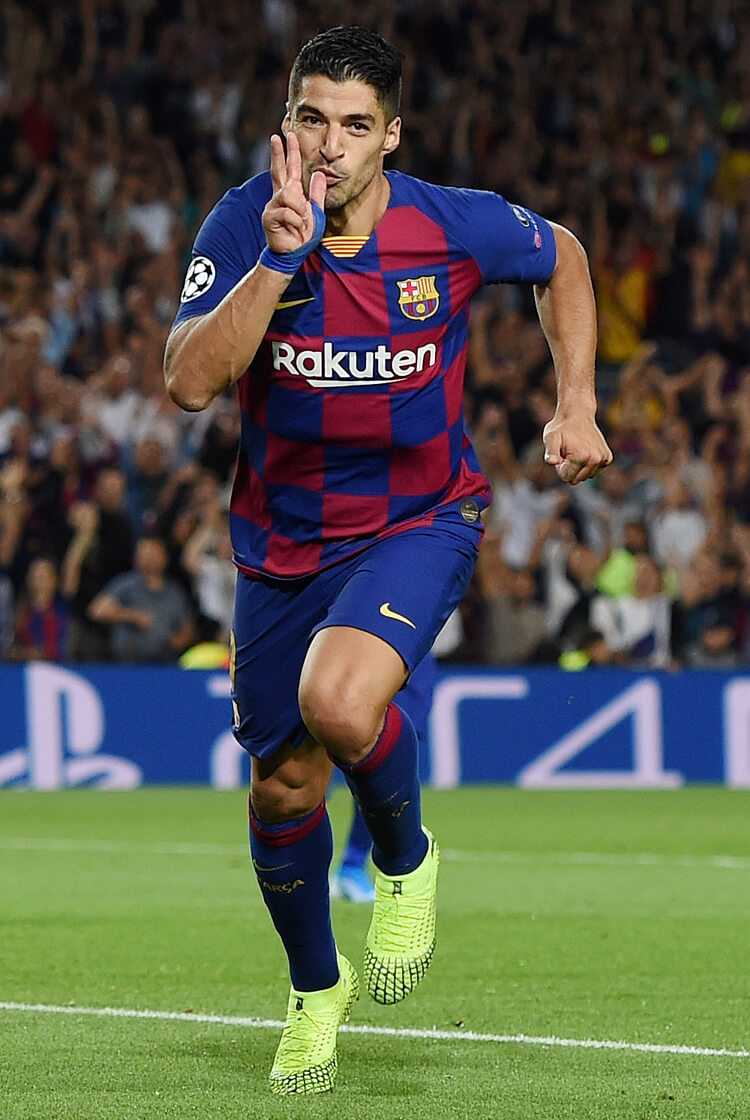 Luis Suárez scored twice as Barcelona recovered from going a goal down in only the second minute to secure a 2-1 victory over 2010 winners Inter Milan in the Champions League. It was Lautaro Martínez who gave the visitors the lead, and who threatened to double that lead when his header forced Marc-André ter Stegen into a fine save. Antonio Conte's organised team defended that lead impressively, and largely frustrated Barca until substitute Arturo Vidal's cross teed up Suárez's even more impressive volley. Lionel Messi then ran 40 yards before feeding the Uruguayan to record their winning goal in the 84th minute, meaning Ernesto Valverde's team are unbeaten at the Camp Nou in 33 in the Champions League. Inter had been unbeaten in all competitions since Conte's summer appointment; had they won, it would have been the first time ever that neither Barca nor Real Madrid had recorded a victory after two Champions League matches. The hosts and Valverde regardless remain under pressure, owing to their underwhelming start to the Liga season. 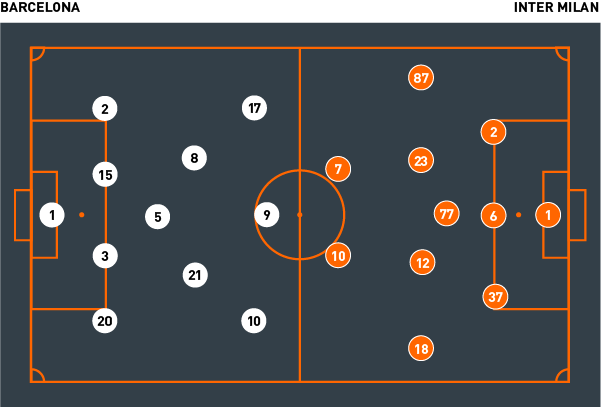 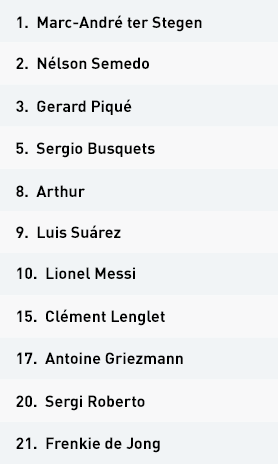 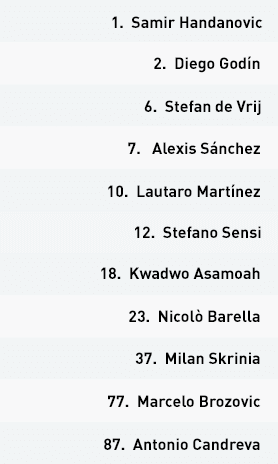 Barcelona were organised by their manager Ernesto Valverde into a 4-3-3 formation led by the fine front three of Antoine Griezmann, Luis Suárez and Lionel Messi. Inter Milan’s early goal confronted them with the task of thereafter having to break down a deep, organised defensive block, so they attempted to overload the visitors’ wing-backs by drawing them with full-backs Nélson Semedo and Sergi Roberto, and wider central midfielders Arthur and Frenkie de Jong moving wide to receive possession.

That the visiting wing-backs proved capable of moving out quickly and still cutting off passes to the advancing midfielder somewhat frustrated them. It took Sergio Busquets withdrawing into central defence for Barca to evade Inter’s organised defensive structure and beat the first line of their press with a three-on-two overload against Alexis Sánchez and Lautaro Martínez.

Messi increasingly drifted inside to receive possession between the lines, and Barca adjusted by playing around Inter’s three-strong midfield; they drew one of the midfielders to one side, positioned individuals on the outside of midfield on the other, and switched play while their opponents were committed to the opposite side of the pitch. This contributed to potential two-on-ones against the defending wing-backs if Barca’s full-backs advanced, and to their equalising goal, even if they had required patience as they continued to shift possession in the pursuit of spaces through which they could penetrate.

To that end their front three played in narrower territory when possession progressed towards the final third, in an attempt to encourage combination play, even if Inter defended well against that. When Arturo Vidal came on during the second half their midfield triangle was also repositioned so that Vidal played as an attacking midfielder in front of Arthur and De Jong, who had previously operated together ahead of Busquets. This fixed presence between the lines offered Messi greater freedom, and he capitalised by having a greater share of possession and using it to attack.

In transitions Barca played forward as early as possible to pursue the spaces left by Inter’s wing-backs advancing, and therefore withdrew forwards into midfield to provide additional numbers and overloads against the opposing midfielders who were already in position.

Inter operated with an impressively-organised 5-3-2 when they were without possession, and sought to restrict Barca to playing around and in front of them by maintaining numbers and a compact shape between the ball and goal. They used a man-marking structure in midfield, and if their forwards were unable to screen the passes into Barca’s full-backs, their wing-backs would advance to close them down; in turn, the remainder of their defensive structure would move across to ensure that their shape remained compact.

On the occasions Barca used a long switch of play to the far-side full-back, Inter’s wing-back would hold his position until his teammates had moved enough to ensure that the distances between them remained as they should before then advancing to engage. Their early goal was followed by them moving into a lower block and the distance between their defensive and midfield lines being kept to approximately 10-12 yards, to prevent penetrations in central areas; if an individual received between those lines, Inter would use players from both units to press them, from either side.

When a Barca player drifted towards their own defensive line or into a false full-back position, the visiting midfielders would maintain their shape instead of continuing to man-mark them, owing to that player moving into territory in which they were unlikely to pose a significant threat.

While they were in possession Inter Milan played in Antonio Conte’s favoured 3-5-2, led by the new-look attack of Alexis Sánchez and Lautaro Martínez. After scoring their early goal, they looked only to attack Barcelona during transitions, so their possession was minimal.

When they played out from defence, Inter encountered an aggressive, man-oriented press, so they used their goalkeeper Samir Handanovic as a free number to attempt to draw a Barca player to leave the individual they were marking so that possession could be played to them. If this represented a risky approach, it was one they also executed well, and once they had evaded that press they attempted to play passes in behind from deeper territory towards their attackers’ runs. But for the defensive efforts of Gerard Piqué and Clément Lenglet they would have extended their lead.

They also pursued switches of play during periods of established possession – by advancing their far-side wing-back into a position that was both high and wide – and when they succeeded they would send crosses into the penalty area, which also threatened, even if their more direct approach proved more effective.

Barca remained in a 4-3-3 while they were defending, and when they were led by their man-oriented press. When one of their full-backs was occupied, the other moved to create a three-on-two overload with their two central defenders against Sánchez and Martínez; those central defenders also withdrew with Sánchez and Martínez if Inter attempted to play to their feet. In transitions, they attempted to implement an immediate counter press involving each individual moving to an opponent in the area possession had just been lost.