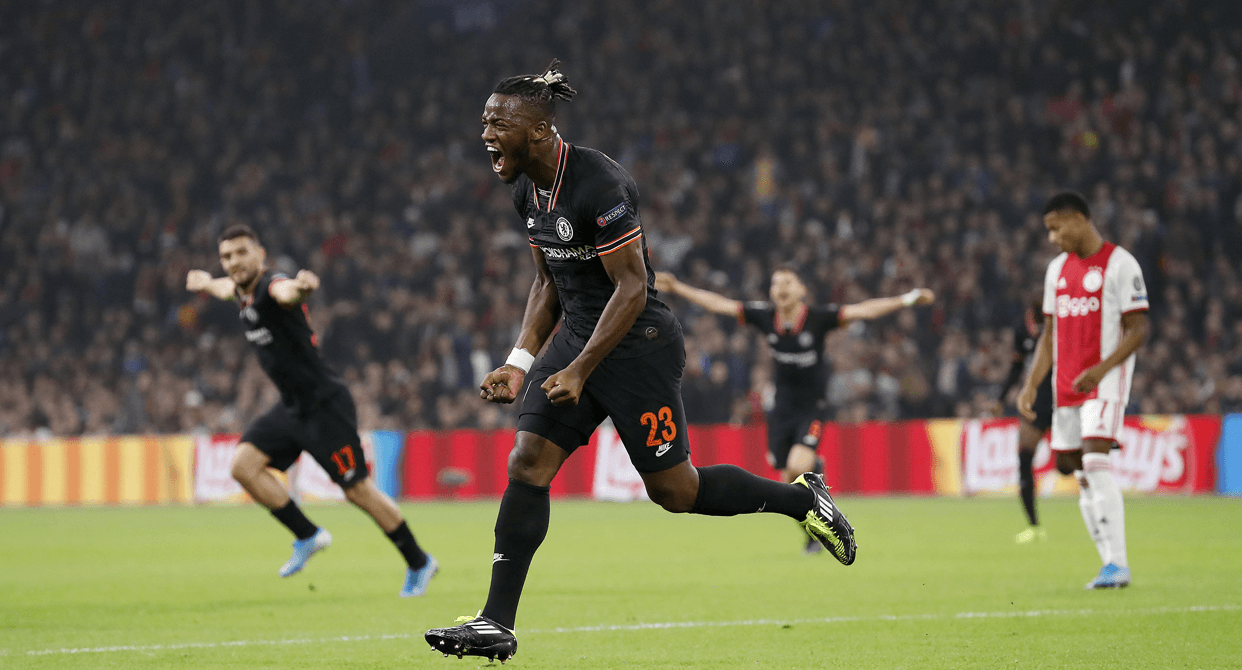 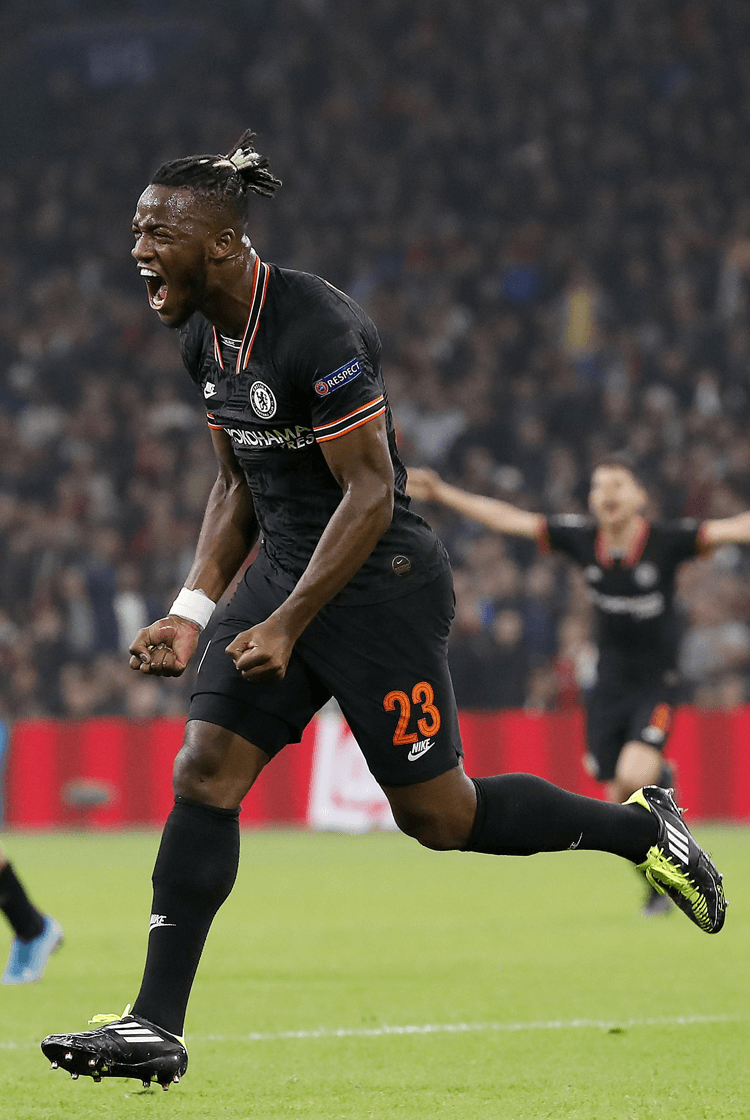 Chelsea recorded perhaps the finest victory of Frank Lampard's short reign as manager when Michy Batshuayi came off the bench to score a late winning goal away at last season's semi-finalists Ajax. The hosts may be rebuilding following the summer departures of Matthijs de Ligt and Frenkie de Jong, but they had won their first two previous Group H fixtures and were frustrated when a Quincy Promes goal was ruled out by the Video Assistant Referee. On a positive evening for Chelsea, Callum Hudson-Odoi became their youngest player to start a Champions League fixture since Josh McEachran in December 2010, while the visitors also kept successive clean sheets under their new manager for the first time. 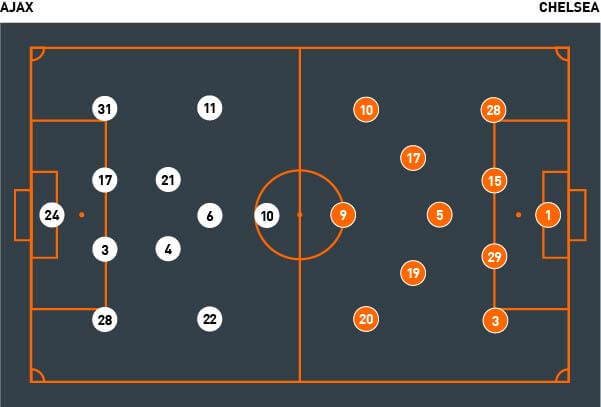 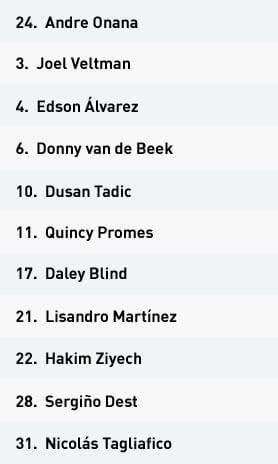 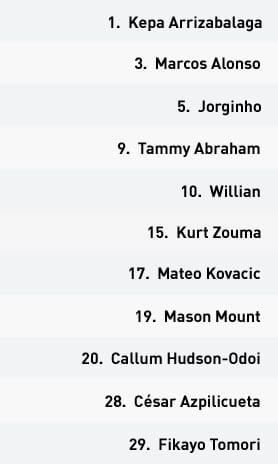 Ajax were set up in a 4-2-3-1 formation by their manager Erik ten Hag, with Dusan Tadic starting as his central striker. Edson Alvarez and Lisandro Martínez, forming a double pivot in midfield, regularly withdrew to receive on the half-turn and advance play towards their attacking midfielders.

The hosts looked to play vertical passes from central defence into midfield, which encouraged Frank Lampard's team to press aggressively and led to mistakes that gave Chelsea opportunities to counter-attack. On the right, Hakim Ziyech and Sergiño Dest were encouraged to rotate to create spaces behind Blues left-back Marcos Alonso, but that left them vulnerable defensively if possession was lost.

They also sought to play their attackers in between the lines, but when they did so they lacked runners in behind. This meant that, while they impressed in possession until they reached the final third, they lacked the necessary detail in their passes and penetrative movements once there.


Chelsea defended in a 4-1-4-1 shape, in which Callum Hudson-Odoi and Willian withdrew and tucked in alongside Mason Mount and Mateo Kovacic in a midfield line of four. Jorginho sat behind the midfield four, with lone striker Tammy Abraham on the first line.

When Ajax instead attempted to play in behind in the early stages of their build-ups, central defenders Kurt Zouma and Fikayo Tomori defended the channels well, positioning themselves between possession and the goal and encouraging attacking runners towards the touchline. The defenders' physicality also meant that those early passes in behind were rarely a suitable option.

When defending in their mid-block, Chelsea protected central areas and encouraged passes out wide, when they would then increase the intensity of their press. Ultimately, they put in an impressive defensive display and worked hard to keep their second clean sheet in the space of five days.

Frank Lampard set his Chelsea team up in a 4-3-3 structure when they had possession, with Jorginho, Mason Mount and Mateo Kovacic a three-strong midfield behind the front three of Willian, Callum Hudson-Odoi and central striker Tammy Abraham. They were untidy in possession during the opening exchanges, when they played at a particularly high tempo, but once they discovered greater composure they focused on creating opportunities out wide.

They regularly played to Hudson-Odoi’s feet to encourage him to use his one-on-one qualities to bypass Ajax right-back Sergino Dest. The visitors' left side, with Hudson-Odoi regularly combining with Mount and left-back Marcos Alonso, became increasingly influential; Hudson-Odoi would start wide and make runs from out to in, while Mount would receive a set pass and then return another into the path of Alonso.

Mount also looked to make penetrative runs in behind, although when Chelsea played long towards Tammy Abraham there was rarely enough support in and around him for the visitors to genuinely threaten in this way.

Ajax remained in their 4-2-3-1 when they were defending. They waited for Chelsea to play out to one side, and then lone striker Dusan Tadic would be joined by the far-side wide attacker in closing down the visitors' two central defenders. If possession was more advanced, their full-back would move tight to the relevant winger and their remaining defenders would shuffle across to squeeze Chelsea towards the touchline, where the hosts could get numbers around the ball and restrict their opponents' options. Their co-ordination also prevented Chelsea from using their goalkeeper Kepa Arrizabalaga to create an additional number.

While the visitors enjoyed plenty of success on the left, Willian on the right regularly found himself confronted with a defensive wall he was unable to play through when he received to feet and attempted to move inside. Unfortunately for Ajax, they were less secure on the opposite flank, from where substitute Christian Pulisic eventually created the winner for fellow replacement Michy Batshuay. The victory sent Chelsea top of their Champions League group at the halfway stage, with two home games to come.