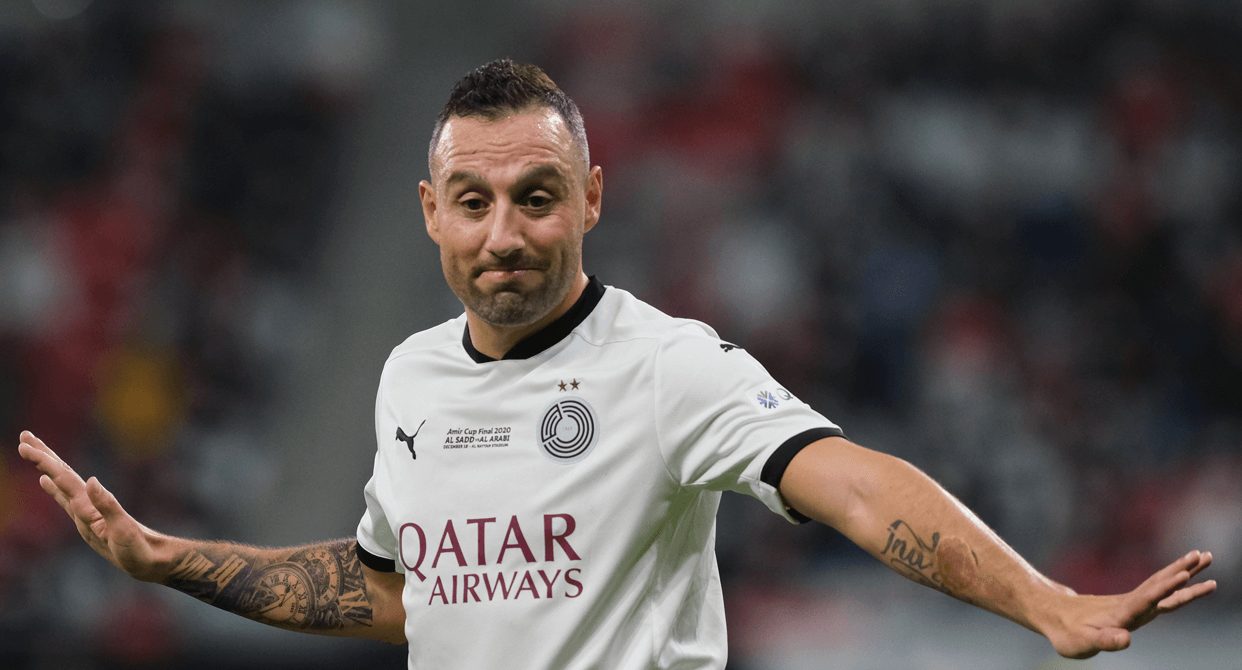 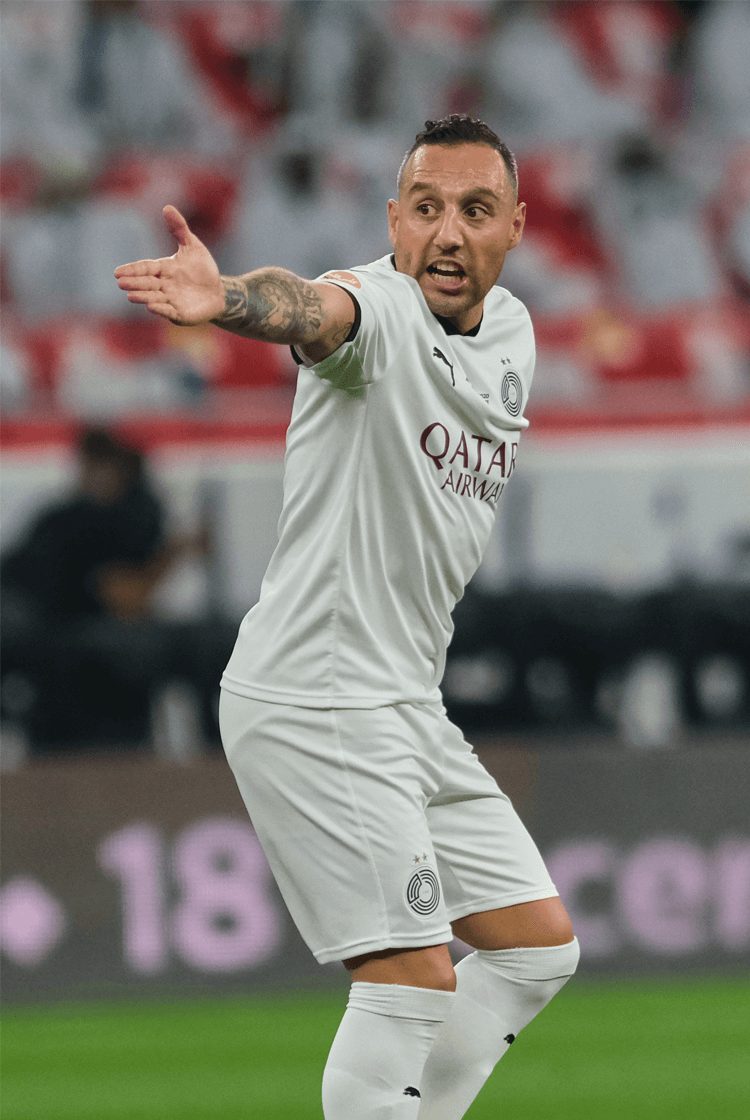 Profile
When Santi Cazorla left Arsenal in 2018 he did so, after almost two years out injured, amid fears surrounding his future as a professional footballer. He proceeded to recover and reinvent himself to such an extent that during his two years at Villarreal he earned a recall to the Spain squad 1,299 days after his previous appearance for them.

One of his former international teammates, Xavi Hernández, then tempted him to Al-Sadd of the Qatar Stars League, where at the age of 36 he was perhaps their most important player as they were crowned champions in March 2021. "I just wanted to play football again," he once said. "There have been all sorts of moments, times you consider throwing in the towel, but I knew it was a long run and if I didn’t make it, I didn’t want to blame myself or think I could have done more. There were (negative) things said to me that I didn’t treat as important. I took this on with optimism, tried to leave the bad things behind, and I’ve had my reward."

Tactical analysis
Cazorla has long been the most versatile of attacking midfielders, and one at his best operating through the three central lanes. He is particularly strong with both feet – there is a wide variety to his technique with both his left and right foot, after once being more inclined to favour his right – and to the extent that he remains capable of manipulating the ball and offering impressive attacking qualities across the pitch.

In a 4-2-3-1 he is comfortable in any position in the line of three behind the lone striker, owing to his ability to cut infield from both the left and right and the variety of delivery he can execute from each, often at the angle the target of his delivery requires, and with an improved quality over many of those who only ever feature wide. If he is instead in a more central position he contributes to combinations or plays through balls with the same quality, offering curve and spin from both feet in the same way that he demonstrates at set-pieces.

When selected as a number 10, Cazorla consistently remains in an advanced position around the striker in front of him to provide the link from midfield and into those making forward runs (below). If he is instead in a wide starting position, he moves infield to operate through the inside channels – encouraging the relevant full-back to provide the necessary attacking width – in the pursuit of passing combinations into those in central midfield or playing penetrative passes into those making runs in behind. It is that creativity – in contrast to wide forwards who mostly favour cutting infield before shooting at goal – that so often stands out.

His agility and balance – that ability to dribble his way out of pressure – is complemented by his vision and ability to continue to play ambitious passes while under pressure, which he particularly excels at when he has advanced to behind his opposing midfielders and is therefore being pressed from both in front and behind.

It is as he has continued to evolve – largely owing to some career-threatening injuries – that he has also gradually been used as a defensive midfielder. From that deeper territory and the increased responsibility it gives him in the earlier stages of building possession – when he is no longer one of the targets in those phases – his accurate and well-timed passing triggers counters. There were also times at Villarreal, where his career was so impressively revived, that he featured on the left of a midfield four and therefore in a position where he could withdraw from pressure and play – often direct – passes from a deeper position to those in the final third (below).

Regardless of his starting role, it is through the inside channels that Cazorla continues to offer the greatest influence. The player who arrived at Arsenal and who created from the left, right, and through the centre from an advanced position was, by the time he was leaving Villarreal, mostly creating from an inside left position as an attacking central midfielder in a three, from the left of a four, or even from the base of midfield.

Role at Al-Sadd
Since moving to Qatar, Cazorla has mostly been used in an attacking midfield role in either their 4-2-3-1 or 4-3-3. That Al-Sadd so often adapt their midfield structure in response to the pressure being applied by their opponents against their build-up play and that Cazorla is so versatile means him often being the one to adopt a different role – potentially to support around their leading striker Baghdad Bounedjah.

He links from defence into the wide forwards who so regularly remain in particularly wide positions, and represents their greatest source of creativity in the final third. Throughout their triumphant league campaign of 2020/21 he both recorded their highest number of assists and created the most goalscoring chances, largely because he remains so effective when operating between the lines. The wide positions their wide forwards continue to remain in heighten his influence by stretching opposing defences and therefore increasing the spaces into which he relishes playing through balls.

For all that his technique with both feet makes him effective through both inside channels – from where he succeeds in finding both wide forwards – as was the case at Villarreal, he has proved most effective towards the left. From the inside left position in their 4-3-3 he regularly advances from central midfield to support attacks and play crosses with both feet – during 2020/21 only Tae-hee Nam and Hassan Khalid, their leading wide forwards, delivered more.

He regularly bends deliveries both around defences, and inside opposing central defenders and into the teammate he is targeting, or sends straight ones towards the far post or far-side wide forward. A further option involves him playing clipped passes over defences towards the relevant wide player (above) – another he can be relied upon to execute.

He has also featured as one of two 10s. Xavi's occasional use of a back three – either via their full-backs advancing and their deepest positioned central midfielder withdrawing into central defence or permanently, and therefore with wing-backs – has meant Cazorla supporting their striker as a 10 in a narrow front three (above).

When that structure is in place he has increased freedom to move ahead of the ball and in line with or even ahead of their central striker. With their width provided by their wing-backs, Cazorla also often has increased space, and to the extent he creates from inside the penalty area almost as a second striker. His abilities there similarly mean him resisting pressure, and involve him playing both deft flicks and even providing the finishing touch.