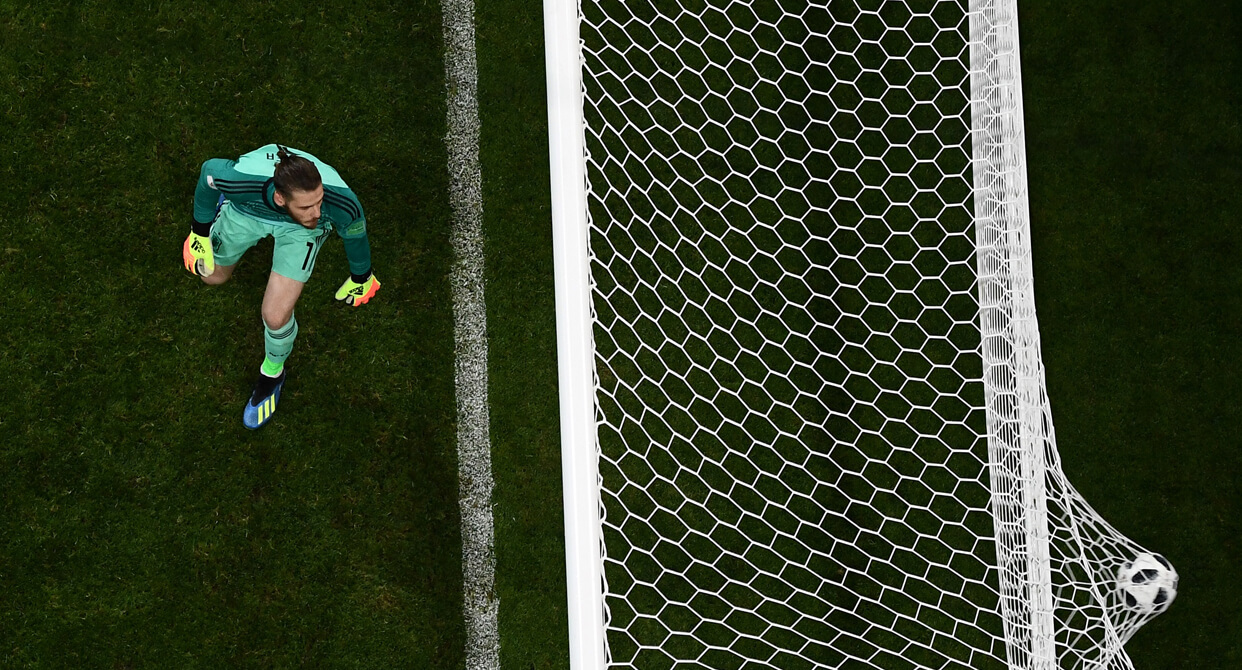 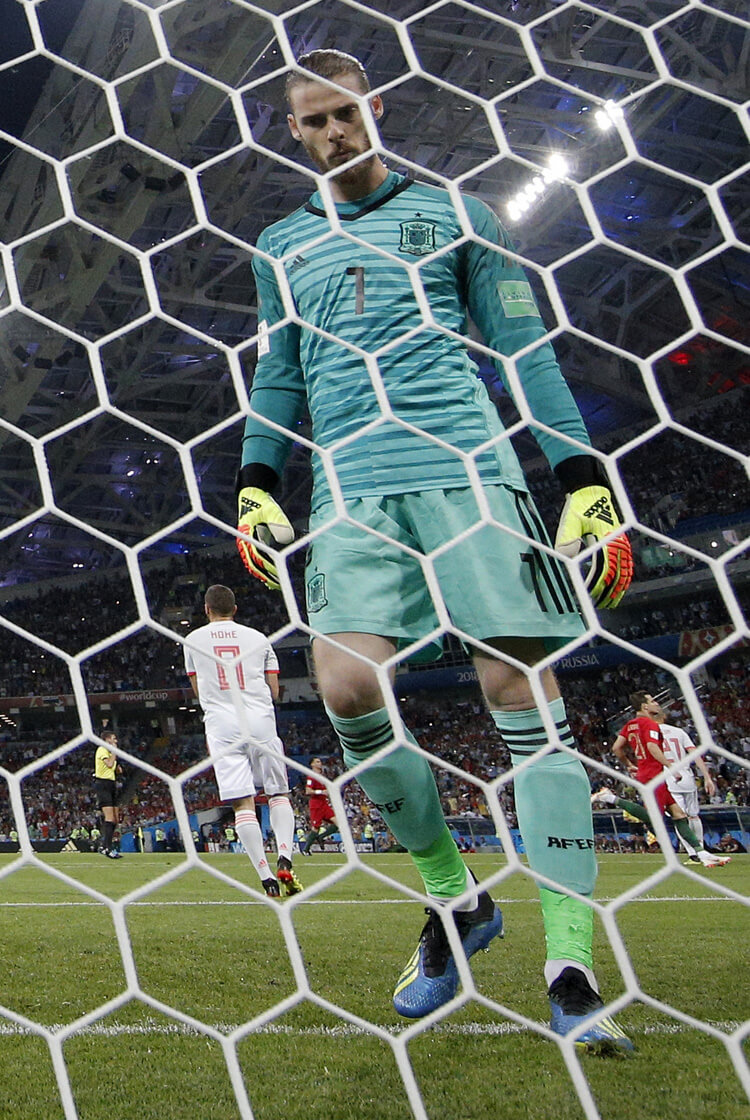 Premier League Watch
Less than 24 hours after reportedly agreeing a bumper new five-year deal with Manchester United, David de Gea had his head buried deep into his gloves after a very disappointing World Cup opener. The Spanish goalkeeper was called into action early in his team’s first Group B fixture against Portugal, as right-back Nacho brought down Real Madrid teammate Cristiano Ronaldo with only four minutes on the clock. Despite De Gea’s best attempts to shake the unshakeable Ronaldo, he dived the wrong way. First blood to the Portugal captain.

In possession, De Gea looked typically composed throughout. Constantly available to help his back line rotate the play away from danger, his distribution numbered 18 accurate passes from 18. But, in keeping with Spain’s unsettled preparation for the tournament, De Gea was himself unsettled by a deeply uncharacteristic mistake as half-time approached. Stooping to collect a tame effort from Ronaldo, he lost focus and allowed the ball to pass through his hands and ricochet off his right ankle into the goal.

Portugal’s front line managed nine attempts on goal in the game. Three were off target and a further three blocked by the Spanish defence, meaning that De Gea failed to save any of the three attempts that Portugal – and Ronaldo – worked on target. Despite some excellent play from the 2010 champions going forward, their goalkeeper got off to a particularly stuttering start.

Sluggish Suarez
Central defender Jose Gimenez covered up a number of Uruguayan cracks with the late header that earned his team all three points against Egypt. The widest crack of all, however, was in the performance of Luis Suarez.

The Barcelona forward looked sluggish throughout, his first touch in particularly letting him down repeatedly. He finished the game with a pass accuracy of 76 per cent (the lowest in Urugay’s starting XI), but perhaps more worryingly he lost possession of the ball 16 times – nearly three times more than his next most profligate teammate. Even for a central striker, who is usually marked by multiple players throughout, that is a poor return. In front of goal Suarez also looked way below par, missing multiple chances and managing only one attempt on target during the game.

Last-gasp Iran
Iran grabbed their first victory at a World Cup for 20 years, when a second last-gasp headed goal of the day helped them steal all three points from their tie against Morocco. The result was especially difficult to take for the Moroccans, who dominated the first half and most of the second, only for Aziz Bouhaddouz to head into his own net – the first substitute to score an own goal at a World Cup for 12 years. The entire Iran team managed only 182 successful passes in the whole the match, and managed to win despite not registering a single shot on target in the second half.

Relentless Ronaldo
To Cristiano Ronaldo’s multitude of individual records, add another: at 33 years and 130 days, the Portuguese superstar is now the oldest player ever to score a hat-trick at the World Cup.

His first came from the penalty spot after he himself was brought down by Real Madrid teammate Nacho. His second, somewhat fortunate after David de Gea spilled a routine shot into his own goal. But his third and final goal of the evening had no air of fortune, as he struck a glorious dipping free-kick into the top corner. It was Ronaldo’s 45th direct attempt from a free-kick at a major championship – and, amazingly, the first to go in. It completed his 51st career hat-trick and, peculiarly, was also the 51st hat-trick in World Cup history.

Uruguay’s striking struggles
Despite claiming all three points against Egypt, Uruguay showed little in the way of connection between
midfield and attack. Egypt set up in a 4-2-3-1 defensive structure, with Tarek Hamed (before injury) and Mohamed Elneny instructed to leave minimal space between themselves and their central defenders. And in the first half especially, both Uruguay forwards – Edinson Cavani and Luis Suarez – struggled to have an impact.

From here, however, Uruguay struggled to penetrate the compact lines of Egypt’s defensive block. Both Cavani and Suarez became frustrated, and began to move away from the Egypt defence (above), desperate to collect the ball at feet. This meant Uruguay had minimal penetration in behind, and their two most lethal players were now well outside the Egypt penalty area. In the entire first half, for example, Cavani didn’t have a single touch in Egypt’s penalty area. Perhaps a combined 99 domestic games between the two this season were starting to show.

The Spain left
Despite the dramatic and unprecedented dismissal of head coach Julen Lopetegui on the eve of the tournament, Spain continued with the patient, possession-based style for which they are known. This focused heavily on their left side during their build, with 43 per cent of their total passes stemming from their left channel. With Portugal setting up with two defensive units of four, the Spanish midfield unit effectively rotated, often searching for Isco in between the Portuguese lines.

Andres Iniesta often dropped deep, luring Bernardo Silva out of Portugal’s defensive shape. Left-back Jordi Alba would then provide the attacking width, as he rampaged down the touchline – often taking Portugal right-back Cedric with him. These small yet crucial movements created space for Isco to receive at feet, with much more time and space deep in the Portugal half. Isco’s positioning was the crucial stepping stone into the Portugal final third, and Spain repeatedly looked for him – 67 per cent of his passes were based in the left channel.

Eventually, Portugal adapted to this pattern, as Joao Moutinho began to block access into Isco. Isco would then look to replace Iniesta and drop deeper near Sergio Ramos in the Spanish back line. From here, Ramos continually looked to switch play with a host of superbly hit diagonal passes out to Nacho on the right.