Profile
With Barcelona undergoing a transition and rebuilding their team after so successful a period, it could yet be individuals like Ronald Araújo who define the next. With Frenkie de Jong, Ansu Fati, Pedri and others, there exists the core of another promising team; Araújo’s progress throughout 2020/21 has demonstrated he may yet emerge as the leader of their new defence.

Ronald Koeman, the manager who first gave Araújo regular first-team football at the age of 21, is as familiar as any with what is required to succeed in that position for the most demanding of clubs. “He is proving to be a brave boy,” he said of the Uruguayan. “He’s physically very strong and has a great future ahead of him. Hopefully he will continue with the number four for many years.”

Tactical analysis
Perhaps unusually for a player at Barça, building play from central defence with passes into midfield is not Araújo’s greatest strength. That is not to say he cannot do so – he is instructed to fairly frequently, but his distribution sometimes invites pressure. He regardless has the ability to circulate the ball from side to side with ease, and is comfortable passing wide to the right-back alongside him from his most consistent position on the right side of central defence.

If the passing lane out to the closest full-back does not exist, he most consistently attempts to find his fellow central defender, who can then filter play into midfield, or to a midfielder who has withdrawn into central defence. The latter, particularly, is a common occurrence at Camp Nou.

Though largely discouraged from seeking to play lengthy balls out from the defensive third, Araújo has demonstrated promise when attempting to play direct passes in behind the opposition. When doing so, he convinces in striding out from defence and looking to attack the spaces behind an opponent by looking for the run of a teammate with a diagonal switch of play, sometimes over distances of 60 or more metres (below).

When his team is attacking he commits to his defensive duties and remains aware of the opposition’s potential during transitions by tightly marking an opposing striker. His intention is to be proactive in preventing that player from securing possession if the ball travels towards them, in the hope of stopping them from being able to lay it off to a teammate breaking from defence. 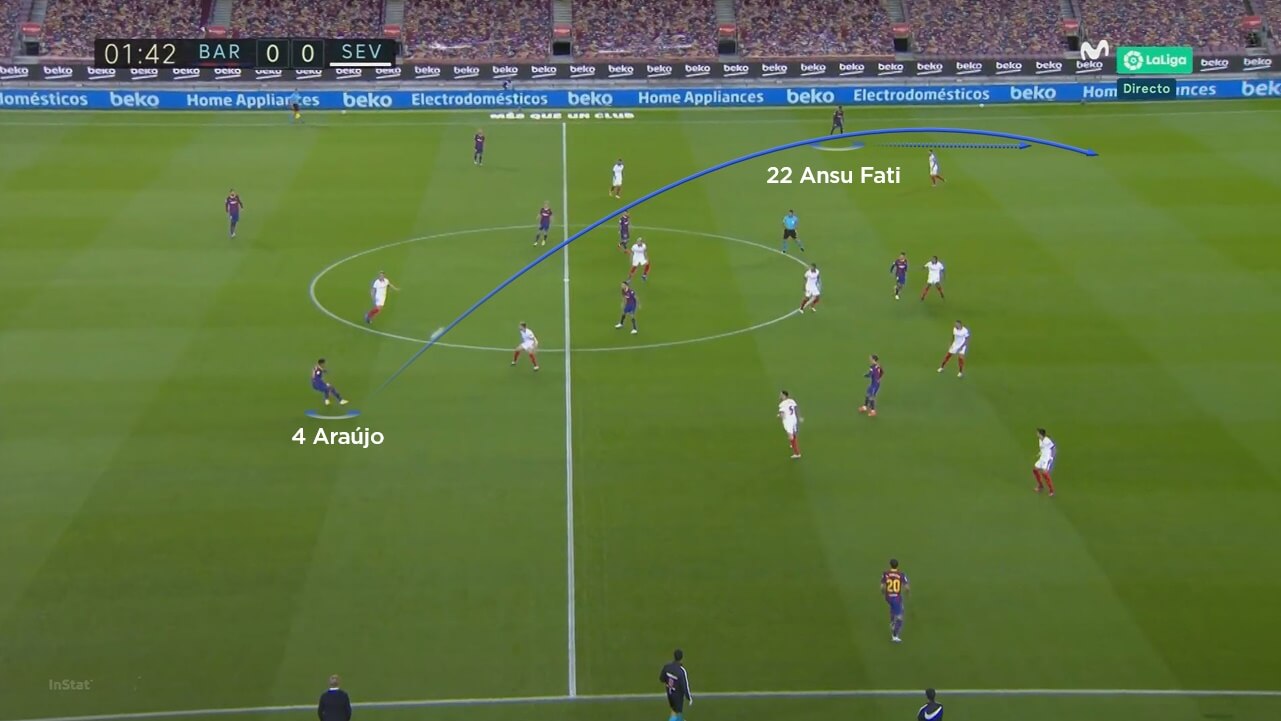 At set-pieces Araújo represents a major presence, and he therefore represents a useful asset to his team at both ends of the pitch. In the final third he is a target for direct crosses into the penalty area, and when defending set-pieces he plays an organisational role while also readily making clearances.

He is also very good at man-marking at them, because he is good in the air, and adept at getting around opponents attempting to block him off, ensuring he can continue to track the player he is marking (below). Doing so while monitoring the whereabouts of the ball as it enters the area is another indication of both his defensive ability and his intelligence. 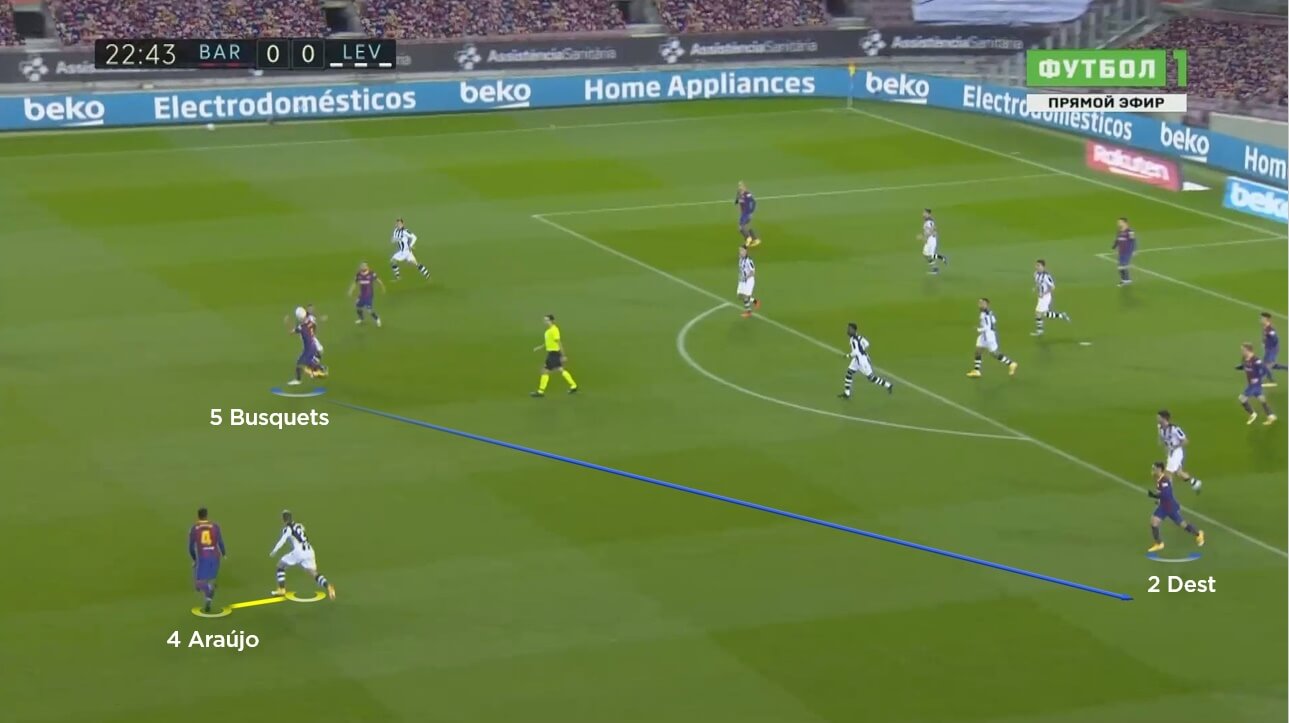 Role at Barcelona
The role of a central defender at Barça has long had very specific demands, especially in possession. Araújo, however, does not have the penetrative passing ability of a Gerard Piqué, Clément Lenglet or Samuel Umtiti, and is instead a very different central defender to those they usually opt for.

He is different largely because of his preference to defend on the front foot. When Barça attack, Araújo advances to close to his direct opponent to actively try and win the ball back and maintain his team’s attacking pressure, rather than just trying to force play away from goal. When doing so he displays an impressive ability to anticipate and interpret the movements of his opponents, and if he is forced into a direct duel with them he is usually able to win the ball. Should he struggle first time around, he then relies on his speed to catch that opponent up. 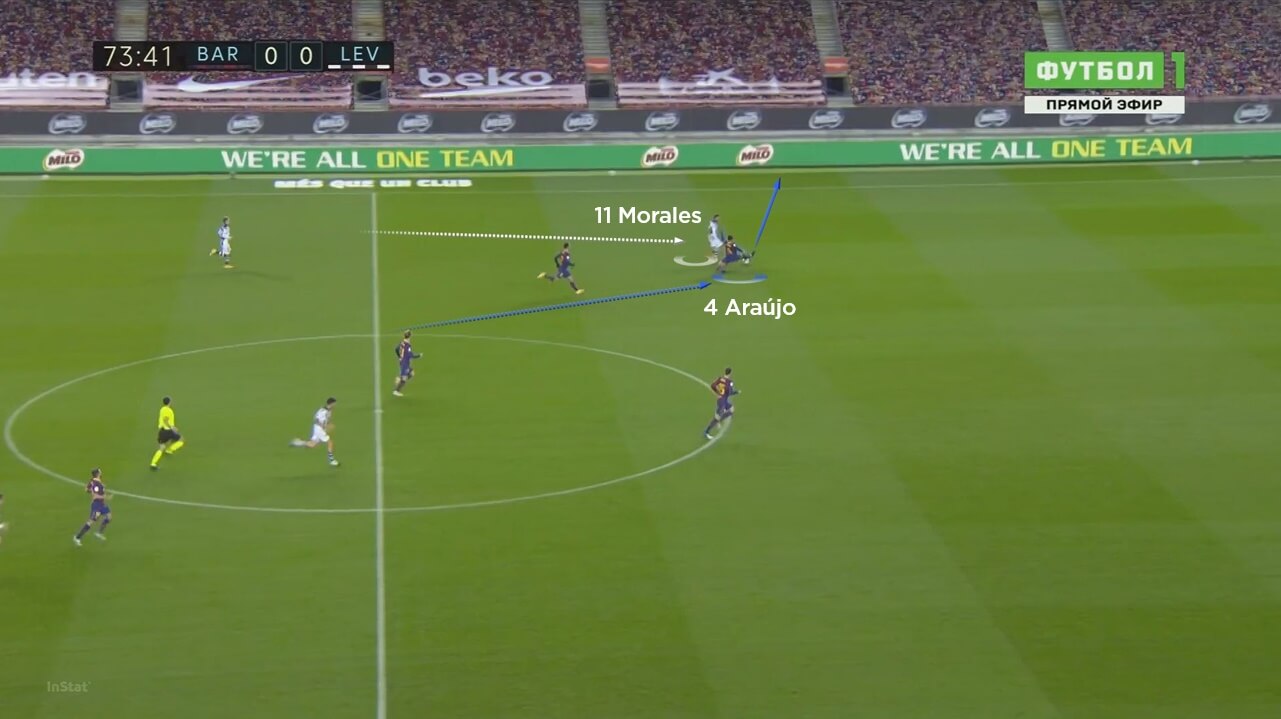 Given how high he advances he leaves himself as big a distance as possible to chase play if he is beaten. He is also not reluctant to go to ground if the situation demands, when he can execute accurate and effective slide tackles when running at speed (above).

If instead in a more withdrawn position he is very good at defending direct balls forward, and wins them with a remarkable frequency. He is also adept at cleanly winning the ball when faced with crosses from wide. In both circumstances he balances the dual challenge of marking his opponent and maintaining sight of the ball with assurance. 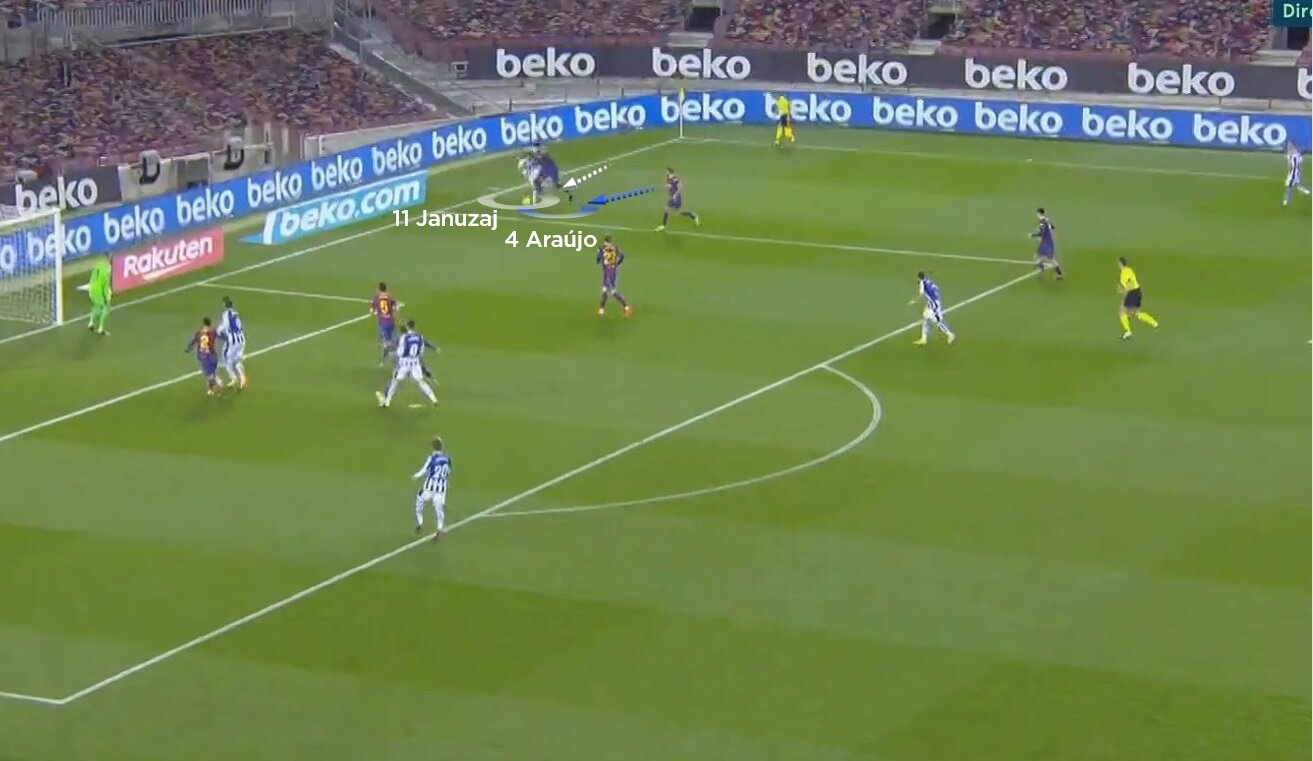 Araújo is a robust individual who not only wins those battles, but who also, when necessary, directs the ball with force. He is capable of making headed clearances that are equally powerful and intelligent in that they can instantly put the opposition on the back foot. He also has the potential to control his clearances to ensure he finds a teammate, and for a team like Barça such an ability is crucial in securing possession quickly before a new attack is launched. When contesting duels with possession on the ground he uses his body to manoeuvre opponents off the ball or into a position in which they lose balance so that he can nip in and steal the ball (above). He often makes sound judgements, and chooses to attack his opponent on the side they are weakest.

Given his passing isn’t the most accurate, he recognises that after stealing the ball with a tackle or interception he needs to play a safe pass to a teammate that gives those around him the chance to reorganise themselves into their in-possession shape. For such a young player, he shows no sign of being overawed, and he is impressively dominant from his position at the heart of Barça’s defence. His reading of the game, his tactical awareness, and his powerful aerial play have meant a successful start to his career for both country and club. 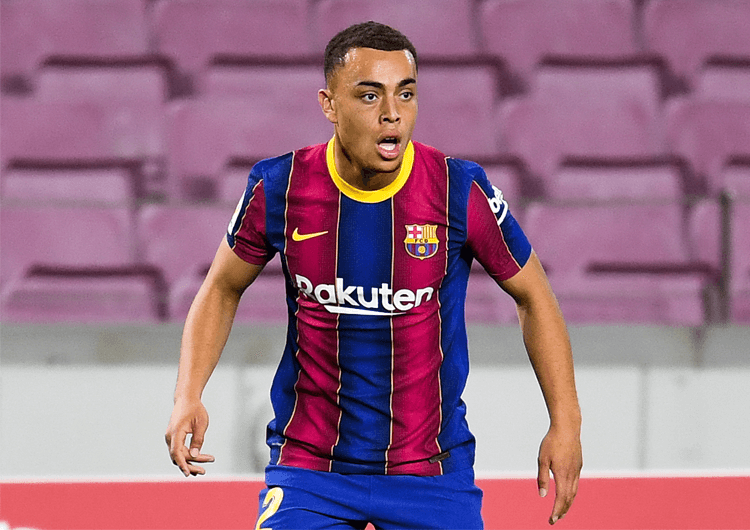 Barcelona turned to USA international Sergiño Dest, from Ajax, when seeking their long-term successor to Dani Alves at right-back. We analyse his abilities 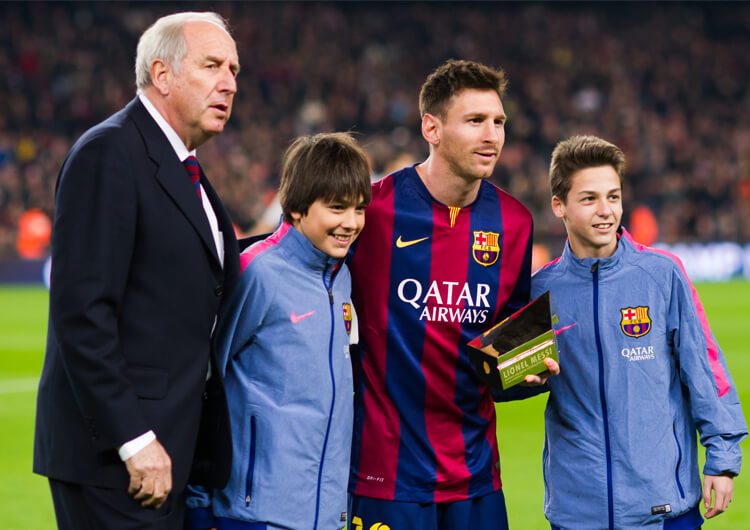 Carles Rexach is widely credited as the figure responsible for bringing Lionel Messi to Barcelona. He revisits the story of a signing that has come to define an era 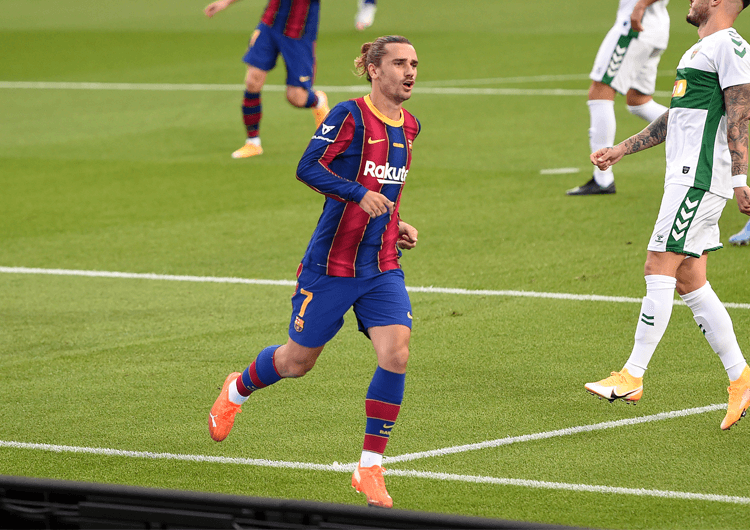 Antoine Griezmann struggled following his move from Atlético Madrid to Barcelona, but has Ronald Koeman found a way to pair him with Lionel Messi?